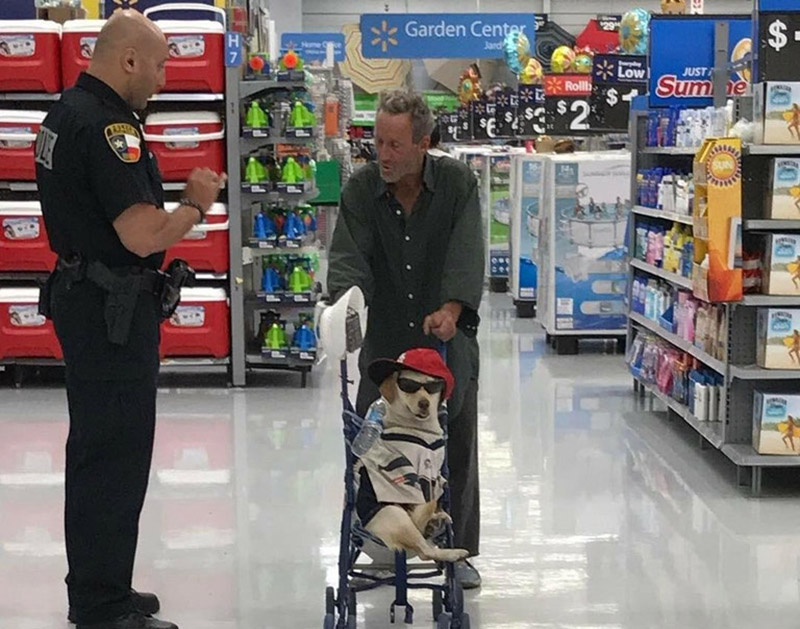 The Jig Is Up, Sean Baugh, And Your Days Of Falsely Dragging Around Your Dog Lamby Around Uptown, Bishop Arts And Deep Ellum For Sympathy Are Over.

Those who frequent Deep Ellum and Uptown know you as that panhandler who uses his sidekick Lamby, short for Lamb of God, to hop around from one populated neighborhood to another, begging for money.

We know you because you’re always spotted in these parts of town with your medium-sized, light colored pup — a true baby angel — either strapped into a milk cart on the front of your bike or buckled into an old child’s stroller that you push around town.

Tourists think it’s hilarious and cute, making it easy for you to walk away from a day of begging with plenty of money in your pocket. It’s become a “thing”  to the point where people take pictures of Lamby and post it on social, enough to where a post of the dog went viral on Reddit about six months ago.

And, hey, we get it. On an purely surface level, it’s cute. But once that initial chuckling subsides, morality sinks in and the thought of how uncomfortable poor Lamby probably is haunts our minds far longer than any initial amusement. That was my experience when I first saw you two years ago at the Katy Trail Ice House, anyway.

Now those of us who’ve felt uncomfortable with the way you use Lamby are coming to learn that we’ve had reason to feel this way. Seems various animal activists around town are stepping up to defend Lamby this week because they say they’ve seen you abuse her. They’ve seen you strap her into your bike crate while biking and force sunglasses on her face and a hat on her head with rubber bands. They’ve seen you pile clothes onto her in the middle of brutal Texas summers.

And now that Lamby has been seized by Dallas Animal Services after she bit a child last month, the courts calling for her to be euthanized as if it was somehow her fault and not your treatment of her that caused her to act out in this way.

C’mon, man. This is your doing. And everyone knows it.

“He’s using the dog to get money so that he can use it to buy drugs,” says Kelsey Karanges, a Dallas real estate agent and active member of the Deep Ellum Community Watch. “That’s just a piece of shit move.”

Your criminal record, which is filled with drug paraphernalia charges, would seem to indicate that Karanges isn’t just making assumptions, either.

That record shows your mistreatment of Lamby, too. The first charges involving the dog came in November 2016 and involved a lack of registration tags, which means she’s not registered. You were also fined for lack of vaccination for her in April 2017, and for failing to spay her. Worse, you’ve taken responsibility for none of these things, and those fines have piled up. So the dog you keep using as a prop for begging money? She’s actually costing you money now!

But that’s not even the worst part. Karanges and others say they’ve also seen you be rough and abusive with Lamby in front of crowds, both by holding her muzzle and yanking her in all kinda of directions. They also say you’ve been known to lose the dog at times. Gee, we wonder why she might want to run away from you!

But, as much a dick as you may be, Sean, you’re not the only asshat in this situation. Dallas Animal Services ain’t exactly looking great these days, either.

Karanges says she’s just one of many who have called your abuse of Lamby into 311 and 911 on various occasions. But DAS hasn’t stepped in to rectify the situation, and even with perpetuating violations against you based on neglect of pet code, you always gets you back.

That’s not gonna happen this time, Sean. Lee Jamison is involved with a pet rescue called Awwdoptable, and she’s devoted much of her time the past month to dealing with lawyers in an effort to save Lamby’s life and keep her away from you. After finding out that Lamby was still alive, Jamison has been tirelessly fighting for the dog’s release and hiring lawyers to help her cause.

Along with the help of others who are doing their best to publicize this issue and your mistreatment of Lamby, Jamison is feeling more and more confident these days that Lamby can be saved when her case is revisited by authorities next week. Here’s hoping Lamby gets the happy ending she deserves.

As for you, Sean? Well, you can just go right on ahead and fuck off for good. Without Lamby to hide behind, people are only going to see you for the shithead you are anyways, right? Why bother letting them? Far as we’re concerned, we’d be happy never to see you again.

Here’s hoping,
Lauren Keuning and the rest of the Central Track staff