Nowtizki Way Will Soon Be A Real Street In Dallas. 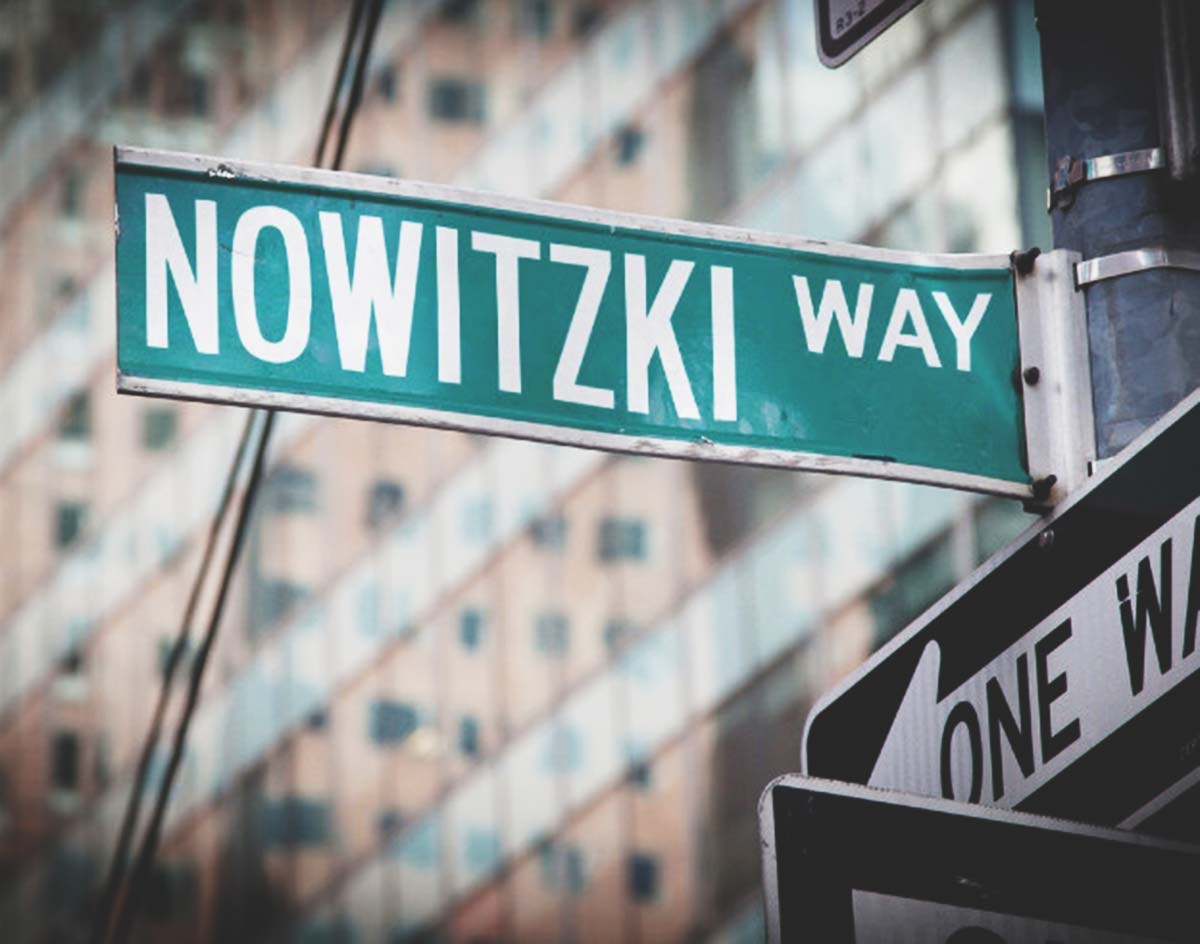 The Process Of Renaming A Stretch Of Road In Front Of The American Airlines Center After Dirk Nowitzki Is Now Officially Underway.

Update on Tuesday, September 24, 2019: After already having been approved City Plan Commission, the Dallas City Council will vote tomorrow on whether to formally rename the three-block stretch of Olive Street that runs from Field Street to Victory Avenue in front of the American Airlines Center as Nowitzki Way.

The measure is expected to pass.

No word yet, though, on when the installation of the new street signs will actually take place; our guess is that the Mavericks will want to coordinate something to coincide with one of the team’s home games during the upcoming NBA season, which kicks off for the team on Wednesday, October 23.

We’ll be keeping tabs on the vote and any announcements regarding street sign unveiling plans.

Update on Wednesday, September 24, 2019: The vote is in. The council unanimously approved the street name change. It’s happening! Now, it’s just a matter of when…

A month and a half after he made his retirement from the NBA official, Dallas is planning to honor the greatest ever Dallas Mavericks player by naming a street after him.

Should the proposal submitted in recent weeks by Dallas City Council member Adam Medrano be approved, a three-block portion of Olive Street that runs in front of the American Airlines Center from Field Street to Victory Avenue will be renamed Nowitzki Way — possibly, even, within just a few months.

In a phone call this afternoon, Medrano says this stretch of road was selected because of its proximity to Victory Plaza, which he says the Mavericks have confirmed as the location for their planned statue honoring Nowitzki’s contributions to the team.

Earlier today, “proposed street name change” signs were posted throughout Victory Park, alerting the public to a cause that the District 2 representative says he’s been working on for the last year.

guess what @MiguelForDallas just texted me (credit to @VoteAdamMedrano for making sure this actually happened) pic.twitter.com/6P70X4xlE0

Medrano says he was inspired to create his proposal after attending a 2018 conference hosted by National Association of Latino Elected and Appointed Officials in Phoenix. While traveling from the airport to his hotel, he says he took note of that city’s choice to honor its own WNBA and Phoenix Mercury legend Diana Taurasi with a street name outside of its home team’s Talking Stick Resort Arena.

SEE ALSO: HOW MUCH DID DIRK PAY FOR HIS DMN THANK-YOU AD?

Upon his return to Dallas, Medrano then reached out to the Dallas Mavericks organization to take owner Mark Cuban and Nowtizki’s temperatures on such a proposal. After getting those two on board, and with Nowitzki personally signing off on the “Nowitzki Way” name, Medrano “three or four weeks ago” officially submitted the paperwork to change the name of the street, which falls within his district’s boundaries.

Medrano’s idea is separate from a similar idea floated by then-mayoral candidate Miguel Solis in the immediate wake of Nowitzki’s retirement. One major difference: As opposed to Olive, Solis’ proposal was to change the name of Houston Street as an additional dig at the Mavericks’ rival Houston Rockets. Reached today for comment, Solis gave Medrano full credit for pushing this notion forward, noting that, despite the differences in the proposals, today is still “a great Day for Dallas.”

The name change itself won’t take hold immediately, though. First, the proposal must be approved by the City Plan Commission before it’s pushed forward to the Dallas City Council, which also must approve the motion. (D Magazine has procured a copy of Medrano’s formal proposal, which has been cosigned by his fellow council members Scott Griggs and Omar Narvaez and notes a number of Nowitzki’s career accomplishments. You can read it here.)

With a scheduled City Council break already on the books for July, Medrano says he doesn’t expect much movement to take place on the proposal until later this summer, with its implementation possibly taking until September or later in the fall.

While Medrano says he can’t publicly confirm whether he’s heard of any Mavericks plans to celebrate the unveiling of Nowitzki Way’s street signs, he laughs at the notion that the team wouldn’t do something to honor that day when it comes.

By that same token, he doesn’t anticipate any opposition for his proposal from either the City Plan Commission or the City Council.

Says Medrano: “If they don’t [approval the proposal]? I mean, I think the entire city will be upset at them — don’t you? I mean… it’s Dirk!”