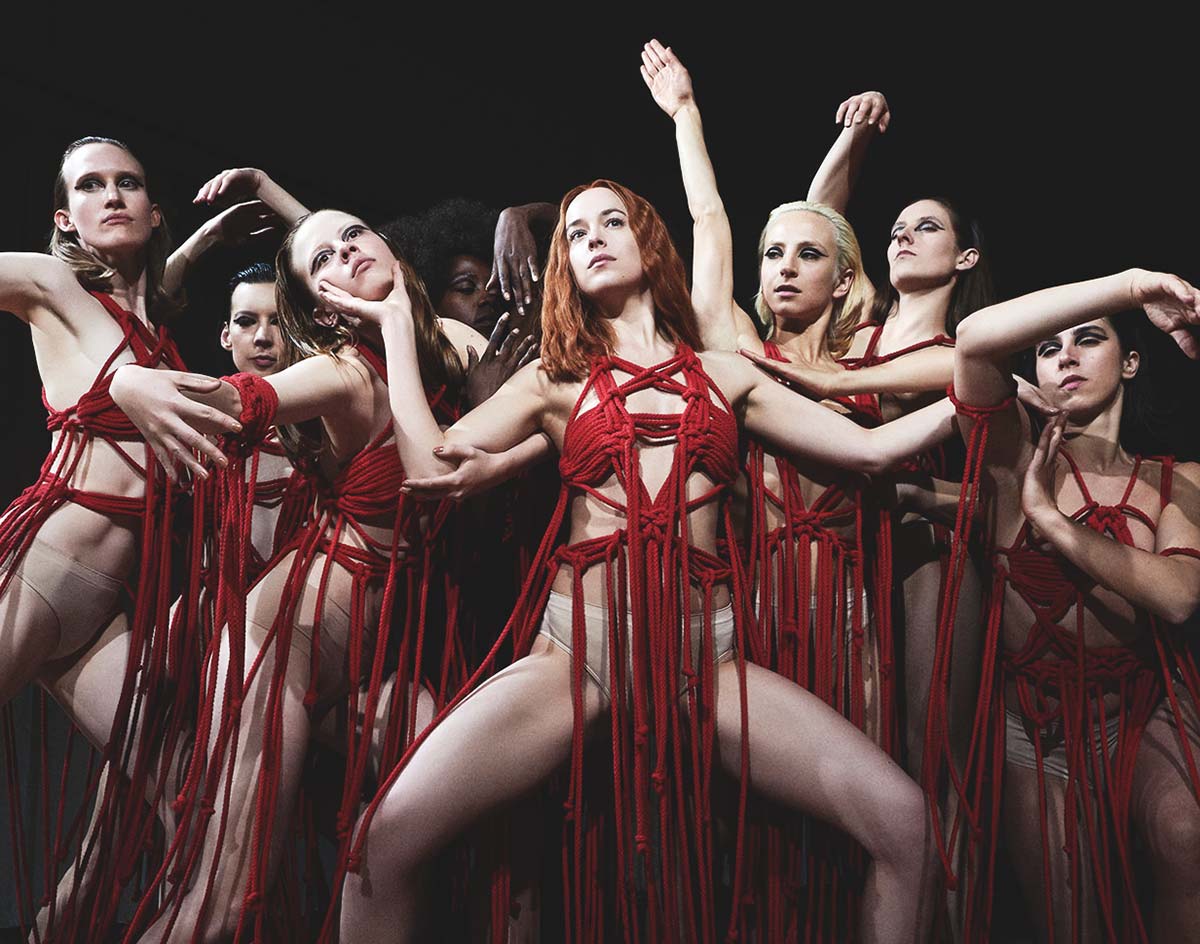 It’s finally getting cooler, but there are actually a lot more reasons to go to the movies now than simple respite from the heat.

This month, there are plenty of films for the family to watch around Thanksgiving when you’re sick of looking for each other and don’t want to go shopping. Unfortunately, most of those are exactly the types of movies I’m sick of — big-budget remakes, unnecessary animated updates and more lousy horror options.

Your better options this month are the movies that are gunning for Oscars, even if they only end up with minor nominations. To that end, my most anticipated film of the year is still Widows, a heist thriller from the director of 12 Years a Slave and the writer of Gone Girl, which features one of the most impressive casts ever assembled.

And even if Bohemian Rhapsody is no good, at least the Alamo Drafthouse, which will smartly be closed part of Election Day on November 6, will help you out by showing some of Queen’s best music videos.

Overlord.
Director: Julius Avery.
Writers: Billy Ray, Mark L. Smith.
Cast: Wyatt Russell, John Magaro, Bokeem Woodbine, Pilou Asbaek.
Opens: Friday, November 9.
Paratroopers land in France discover zombies in a Nazi outpost. That’s all I – or anyone else – should need to know about this sci-fi/horror flick from J.J. Abrams. Need more? OK: It got mostly glowing reviews at Fantastic Fest in Austin. I’m expecting something really intense that’s off the beaten path from the typical mainstream horror flicks. But I swear, if this turns out to be a Cloverfield movie, I will riot in the theater.

Widows.
Director: Steve McQueen.
Writers: Gillian Flynn, Steve McQueen.
Cast: Viola Davis, Elizabeth Debicki, Cynthia Erivo, Michelle Rodriguez.
Opens: Friday, November 16.
It’s my most anticipated movie of the year. Steve McQueen (12 Years a Slave) directs a truly incredible cast – one that also includes Colin Farrell and Robert Duvall – in this crime thriller that sees the widows of a murdered band of thieves carry on their husbands’ work to get out from under the thumb of a ruthless crime boss (Atlanta’s Brian Tyree Henry). I need it, and I need it now.

Green Book.
Director: Peter Farrelly.
Writers: Peter Farrelly, Brian Hayes Currie, Nick Vallelonga.
Cast: Viggo Mortensen, Mahershala Ali, Linda Cardellini, Don Stark.
Opens: Wednesday, November 21.
This is almost certainly going to win Best Picture, so you might as well see it now before the internet gets flooded with think-pieces about it. Reviews at Toronto – where it won the People’s Choice Award – were mixed, but praise was unanimous for its two stars. Mortensen stars as a wiseguy who takes a job chauffeuring an acclaimed pianist through the segregated South in the ’60s. The idea of a racial drama from one half of the duo that made There’s Something About Mary is kind of terrifying, but I’ll trust that these great actors will elevate even the most banal drama.

Ralph Breaks the Internet.
Directors: Phil Johnston, Rich Moore.
Writer: Pamela Ribon.
Cast: John C. Reilly, Sarah Silverman, Taraji P. Henson, Gal Gadot.
Opens: Wednesday, November 21.
Wreck-It Ralph is one of my favorite animated movies of the decade. No, it doesn’t have quite the emotional resonance of a lot of Pixar movies or the inventiveness of The LEGO Movie, but it’s entertaining and creative in its own right. So I was a little worried when the first two trailers for this sequel were pretty bad. Now that they’ve found a way to make it look like more than just a meme factory, I’m excited all over again.

Bodied.
Director: Joseph Khan.
Writers: Joseph Khan, Alex Larsen.
Cast: Calum Worthy, Charlamagne Tha God, Debra Wilson, Anthony Michael Hall.
From the director of some of the biggest music videos of the late ‘’90s and early ‘’00s comes this outrageous-looking comedy. It got a rapturous response at 2017’s Toronto International Film Festival, where it screened as a midnight movie. Calum Worthy (who played the slimy Alex Trimboli in Season 1 of American Vandal) stars as Adam, a white boy with actual flow who navigates his way through the absurdities and complicated racial politics of rap battling. It’ll have to walk a tightrope between being provocative and merely offensive, but judging by the reviews, I’m confident it will land its blows.

The Front Runner.
Director: Jason Reitman.
Writers: Jason Reitman, Jay Carson, Matt Bai.
Cast: Hugh Jackman, Vera Farmiga, J.K. Simmons, Alfred Molina.
Jason Reitman, even after a rough patch, is still one of the best American directors working today. He makes smart movies for adults, which are increasingly rare. His second movie this year – after the excellent Tully – tells the story of Gary Hart’s doomed 1988 presidential campaign. Hart (Hugh Jackman) had it all: good looks, charisma and a knack for connecting with voters. But, like many politicians, he couldn’t keep it in his pants. Reitman’s film looks at the flawed man, but also points to the media circus that followed as the moment presidential races became less about issues and qualifications and more about gossip.

Suspiria.
Director: Luca Guadagnino.
Writer: David Kajganich.
Cast: Dakota Johnson, Chloe Grace Moretz, Tilda Swinton, Mia Goth.
The original Suspiria is my favorite horror movie of all time, so for the longest time I was dead set against this remake, which has been in the works with different directors and stars over the last 10 years. But it now finally looks as if they’ve got the exact right cast – especially Tilda Swinton as the creepy headmistress – and the right approach to the remake. Instead of going beat for beat, they’re taking the same premise – an American arrives at a German ballet school that’s really a coven of witches – and goes in horrifying new directions.

Fatal Attraction.
Director: Adrian Lyne.
Writer: James Dearden.
Cast: Michael Douglas, Glenn Close, Anne Archer, Fred Gwynne.
Playing At: The Magnolia.
Showing: Tuesday, November 6.
One of the best thrillers of the ’80s was one of the most surprising Oscar juggernauts. It garnered six nominations, but zero wins. (I still think Glenn Close should have been honored somehow.) It was the second-biggest movie of 1987, behind, uh, Three Men and a Baby. Michael Douglas is his usual sleazy rich-guy, who has a one-night stand with an unstable woman (Close) who stalks him and his family relentlessly. It’s much sharper than its reputation suggests.

Queen Video Dance Party.
Cast: Freddie Mercury, Brian May, Roger Taylor, John Deacon.
Playing At: Alamo Drafthouse Richardson (Friday), Alamo Drafthouse Cedars (Saturday)
Showing: Friday, November 9; Saturday, November 10.
Bohemian Rhapsody might be a poor representation of the wild life of Freddie Mercury. But at least you can still celebrate the music of one of the most entertaining bands of all time with this collection of music videos. You’ll get a free fake mustache, but no you shouldn’t try to hit those high notes.

Desperado.
Director: Robert Rodriguez.
Writer: Robert Rodriguez.
Cast: Antonio Banderas, Salma Hayek, Cheech Marin, Steve Buscemi.
Playing At: Inwood Theatre.
Showing: Friday, November 16; Saturday, November 17.
For my money, this is Robert Rodriguez’s best movie. A loose, big-budget remake of his previous film El Mariachi (which he made for just $6,000), this is the stylish, ultra-violent late-night staple that features him at the peak of his powers, and Banderas and Hayek at peak hotness.

Found Footage Festival: Volume 8.
Playing At: Texas Theatre.
Showing: Friday, November 30.
Joe and Nick have (somehow) made a career out of finding and compiling the oddest moments from the VHS boom of ’80s and ’90s. Kinder and gentler – but no less bizarre – than their cohorts at Everything Is Terrible!, this eighth tour features a ton of news bloopers, wildly unnecessary instructional videos, poorly acted local commercials and segments from David Letterman’s own private collection of tapes.