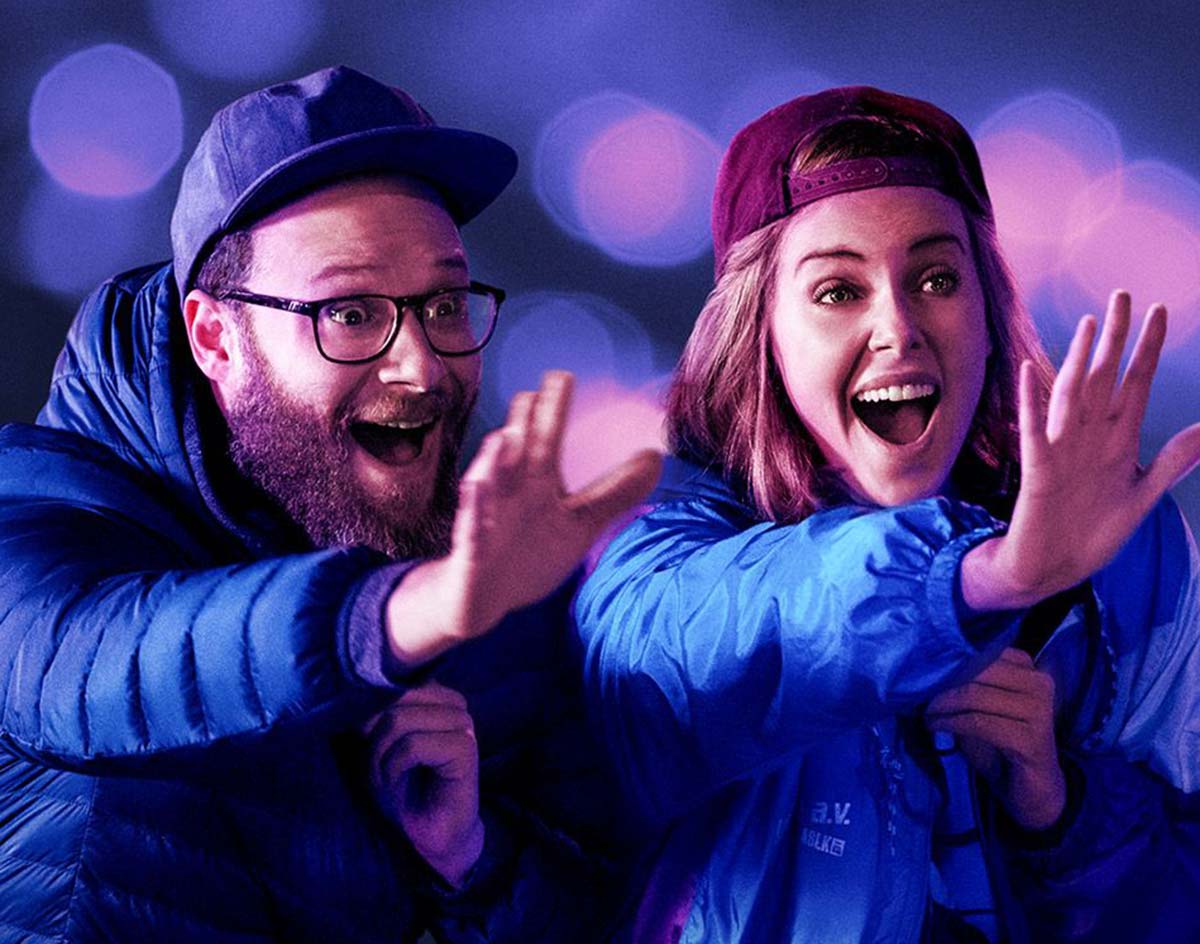 On Long Shot, John Wick: Chapter 3, Godzilla: King of the Monsters And The Rest Of May 2019’s Top New Releases, Limited Showings And Repertory Screenings Around Dallas.

In a way, it seems like the summer is both over and hasn’t begun yet. We can thank to Avengers: Endgame’s record-breaking opening weekend for that, I guess.

But, truth is, May is overflowing with new movies looking to get a piece of that sweet, leftover box office pie.

With five weekends of offerings, this look ahead at the month of movies to come unfortunately doesn’t allow me the space to look into morbid curiosities like Detective Pikachu and Ma. But that’s only because there’s a lot else worth your attentions: We’ve got two R-rated comedies that got rave reviews at SXSW on the docket, plus my own personal, most-anticipated sequel of the summer.

Meanwhile, the arthouse offerings could best be described as “Shit Your Grandma Will Love,” while the repertory screenings are all complete charmers.

(Well, except for that live show. It’s not supposed to be charming. You’ll see what I mean when you get to it.)

Long Shot.
Director: Jonathan Levine.
Writers: Liz Hannah, Dan Sterling.
Cast: Charlize Theron, Seth Rogen, June Diane Raphael, O’Shea Jackson Jr.
Opens: Friday, May 3.
Romantic comedies: They’re not just for Netflix anymore! Charlize Theron and Seth Rogen both have killer comedic timing, even if they seem pretty unlikely as a couple. Here, she plays the Secretary of State, embarking on a presidential run. Meanwhile, he’s a reporter hired to beef up her speeches. When they fall for each other, “it’s like Pretty Woman, except she’s Richard Gere and you’re Julia Roberts,” as Rogen’s character’s buddy (played by O’Shea Jackson, Jr.) puts it. I’m hoping this will be the film that finally matches the potential director Jonathan Levine showed in his first feature, 50/50.

John Wick: Chapter 3 – Parabellum.
Director: Chad Stahelski.
Writers: Derek Kolstad, Shay Hatten, Chris Collins, Marc Abrams.
Cast: Keanu Reeves, Halle Berry, Ian McShane, Laurence Fishburne.
Opens: Friday, May 17.
Of all the gajillion sequels opening this summer, this is the one I’m most excited about. What began as a scrappy little action flick has become a compelling series with a fully realized world and cast of characters. This one adds two Oscar winners – Halle Berry and Anjelica Huston! – and I’m guessing closes out this story. Of course, I wouldn’t be mad if Keanu Reeves came back every few years to shoot some more people in the face.

Booksmart.
Director: Olivia Wilde.
Writers: Susanna Fogel, Emily Halpern, Sarah Haskins, Katie Silberman.
Cast: Kaitlyn Dever, Beanie Feldstein, Billie Lourd, Jessica Williams.
Opens: Friday, May 24.
It’s hard to believe it’s been 12 years since Superbad. It’s even harder to believe that women haven’t gotten their own raunchy, “one last wild night before graduation” comedy — well, not counting last year’s Dallas-set and -shot Never Goin’ Back, anyway. This was one of the biggest hits at SXSW, where it earned lots of praise for the two leads, who have been funny scene-stealers in the past but are now getting their chance to anchor a movie.

Godzilla: King of the Monsters.
Director: Michael Dougherty.
Writers: Michael Dougherty, Zach Shields.
Cast: Millie Bobby Brown, Vera Farmiga, Kyle Chandler, Bradley Whitford.
Opens: Friday, May 31.
I was a little underwhelmed by 2014’s Godzilla reboot. It looked pretty but had zero character development. Somehow, though, I am all in on this sequel, which looks like all-out chaos. All of Godzilla’s foes from the past – Mothra, Rodan and Ghidorah – show up to wreak havoc on the earth, and unleashing Godzilla is mankind’s only resource to stop them. The trailers have been beautiful, and the stacked cast also includes Sally Hawkins (The Shape of Water) and TV all-stars like Thomas Middleditch (Silicon Valley), Charles Dance (Game of Thrones) and David Straitharn (The Expanse).

All Is True.
Director: Kenneth Branagh.
Writer: Ben Elton.
Cast: Kenneth Branagh, Judi Dench, Ian McKellen, Eleanor de Rohan.
The only person who loves William Shakespeare more than your high school English teacher is Kenneth Branagh. The man has done adaptations of Henry V, Much Ado About Nothing and Hamlet, and now he gets to play the bard himself. The wigs and costumes will be exquisite, and the acting will great as usual. Better yet, English teachers will have a new movie to put on at the end of the year now.

The Souvenir.
Director: Joanna Hogg.
Writer: Joanna Hogg.
Cast: Honor Swinton Byrde, Tilda Swinton, Richard Ayoade, Tom Burke.
One of the most raved-about movies at Sundance this year was this dark relationship drama featuring Tilda Swinton and her real daughter playing her daughter. Honor Swinton Byrde is the lead of this period film about a troubled romance between her rebellious rich girl and the schemer she falls for (Tom Burke). It’s not going to be a fun movie by any means, but it should be an extremely well-acted character study.

The Tomorrow Man.
Director: Noble Lincoln Jones.
Writer: Noble Lincoln Jones.
Cast: John Lithgow, Blythe Danner, Derek Cecil, Katie Aselton.
Another well-regarded Sundance debut, this is one of those nice, gentle rom-coms about senior citizens that we’ve gotten a lot of in recent years. I’d watch John Lithgow read the phone book – kids, ask your parents what that is – so I’m sure he can pull off this sci-fi-ish film about an widower who meets his new love (Blythe Danner, effervescent as always) while preparing for a doomsday that might never come.

The White Crow.
Director: Ralph Fiennes.
Writer: David Hare.
Cast: Oleg Ivenko, Ralph Fiennes, Louis Hoffman, Adele Exarchopoulos.
Ralph Fiennes returns behind the camera for the first time in five years, directing and starring in this true-life thriller. Oleg Ivenko plays Rudolf Nureyev, the Soviet ballet’s greatest dancer, amidst his harrowing attempt to defect to the West. Cold War stuff can play as boring or exciting in the right hands, and I’m trusting the star of some of the most entertaining movies of all time to keep this story light on its feet.

9 to 5.
Director: Colin Higgins.
Writers: Colin Higgins, Patricia Resnick.
Cast: Lily Tomlin, Jane Fonda, Dolly Parton, Dabney Coleman.
Playing At: Alamo Drafthouse Cedars.
Showing: Tuesday, May 7.
This classic ’80s comedy might be a little dated, but it’s still depressingly relevant, as women still have to deal with sexual harassment, unfair wages and not getting the credit they deserve for their ideas. 9 to 5 has a killer theme song, of course, but also one of the best comedy ensembles ever. The trio of women at the top of its billing are perfect, and Dabney Coleman is at his dick-ish best as their “sexist, egotistical, lying, hypocritical bigot” boss. The film will make its way to other Alamo Drafthouses in the area throughout the month. Check their websites for dates and showtimes.

My Neighbor Totoro.
Director: Hayao Miyazaki.
Writer: Hayao Miyazaki.
Cast: Noriko Hidaka, Chika Sakamoto, Shigesato Itoi, Sumi Shimamoto.
Playing At: Inwood Theatre.
Showing: Friday, May 17; Saturday, May 18.
The sweetest of Miyazaki’s many masterpieces might be a good place to introduce the legendary Japanese director to your kids (or nieces and nephews). Unfortunately, these are midnight showings, so it’s probably best to leave them at home for these particular screenings.

On Cinema at the Cinema Live.
Cast: Tim Heidecker, Gregg Turkington.
Playing At: Texas Theatre.
Showing: Friday, May 17.
The supremely bizarre senses of humor of these two comedians are not for everyone: Tim & Eric was hit-and-miss for me, and that goes double for Turkington’s Neil Hamburger persona. Together, though, I find these two hysterical. If you’re a film geek and on their wavelength, this live comedy special is probably going to leave you cracking up.

Charade.
Director: Stanley Donen.
Writer: Peter Stone.
Cast: Cary Grant, Audrey Hepburn, Walter Matthau, James Coburn.
Playing At: The Magnolia.
Showing: Tuesday, May 21.
One of the most straight-up charming movies ever made, this spy thriller/romantic comedy has been neglected over the years. Its public domain status means you’ve probably only seen crappy versions of it (unless you have the Criterion Blu-ray), so it’s best to experience this zippy delight on the big screen. It’s got two of cinema’s all-time greatest movie stars — plus the GOAT Walter Matthau! — and set in gorgeous European locations. Not sure what more you could want.