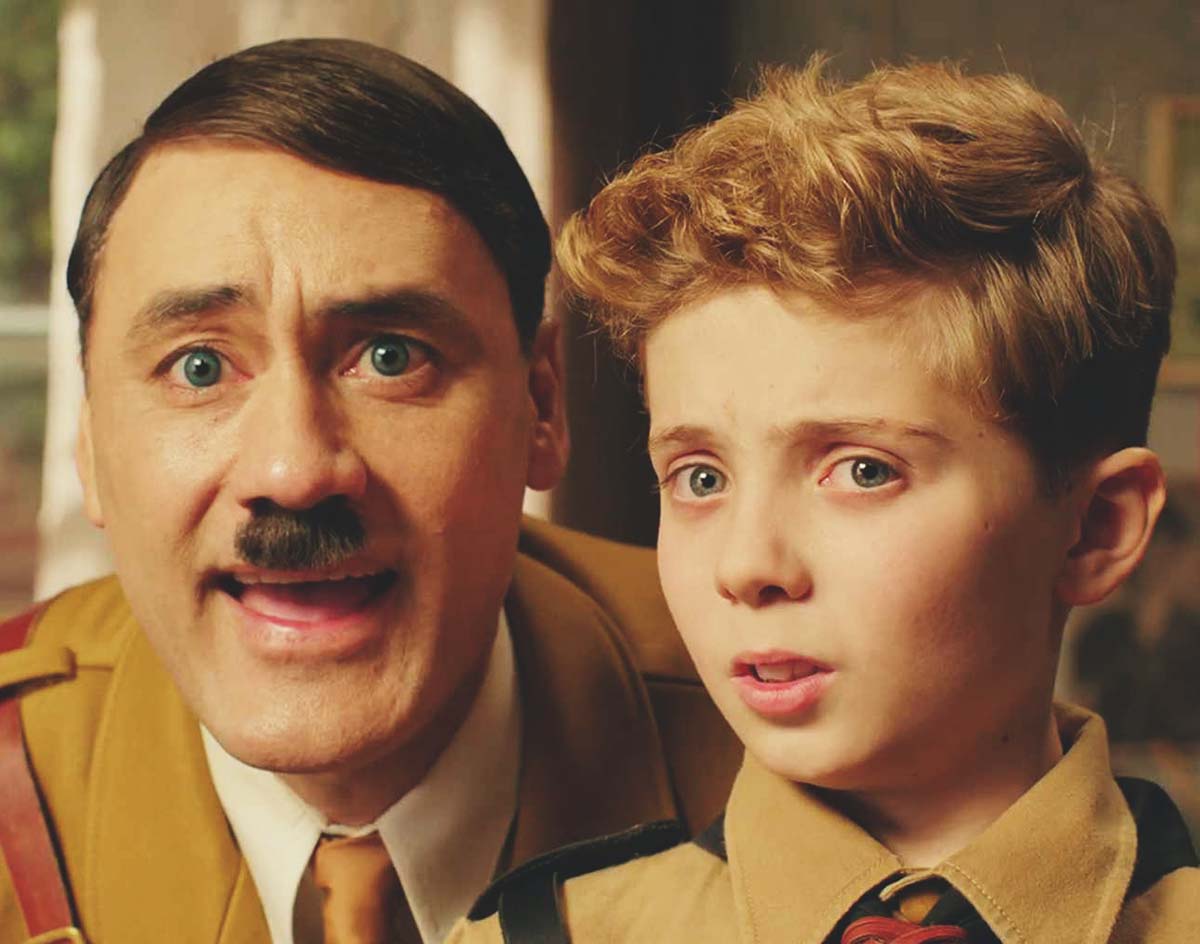 On Gemini Man, Jojo Rabbit, Lucy In The Sky And The Rest Of October 2019’s Top New Releases, Limited Showings And Repertory Screenings Around Dallas.

Maybe it was just me, but September continuing to be stupid hot (except for those random couple of nice days) made it feel like the month would never end.

Now, here October comes along with plenty of action — but surprisingly no major horror flicks.

Instead, I guess we’ll just have to enjoy the horror comedy of Zombieland: Double Tap and The Lighthouse — and, I guess, recoil at the awful discourse around Joker and Jojo Rabbit.

If you’re looking for scares, though, a few cinemas do have you covered these next few weeks: The Inwood, Texas Theatre and Alamo Drafthouse are all doing month-long horror repertory screenings.

That said, here’s a rundown on all of your best movie-going options this month.

Joker.
Director: Todd Phillips.
Writers: Todd Phillips, Scott Silver.
Cast: Joaquin Phoenix, Zazie Beetz, Robert De Niro, Brett Cullen.
Opens: Friday, October 4.
The discourse around this movie has been absolutely absurd. I don’t know if this movie has the power to incite violence – it certainly doesn’t have the intent. But it’s at least got to have something going for it, as it won the Golden Lion at the Venice Film Festival, one of the more highfalutin international fests. And Joaquin Phoenix has been getting raves for yet another version of the Clown Prince of Crime. This one is set in the ’80s, where Batman doesn’t exist but Gotham is still in tatters. I don’t know if the guy who directed the Hangover trilogy is the right person to do a lower-budget, serious-minded take on a comic book movie, but anything to wash away the taste of Jared Leto’s trying-way-too-hard take on the iconic character, right? Well, maybe not: Our own Javier Fuentes dumped all over it in his review.

Gemini Man.
Director: Ang Lee.
Writers: David Benioff, Billy Ray, Darren Lemke.
Cast: Will Smith, Mary Elizabeth Winstead, Clive Owen, Benedict Wong.
Opens: Friday, October 11.
The odds of this being good are like 40 percent, but I’m opting to have faith in Will Smith and director Ang Lee (Life of Pi). In a role that almost certainly would have been played by Arnold Schwarzenegger in the ’90s, Smith plays an assassin who’s being hunted — by himself. A clone (also played by Smith) is on his trail, leaving him to figure out why he’s being betrayed and how there’s another one (or more) of him out there.

Zombieland: Double Tap.
Director: Ruben Fleischer.
Writers: Rhett Reese, Paul Wernick, Dave Callaham.
Cast: Woody Harrelson, Jesse Eisenberg, Emma Stone, Abigail Breslin.
Opens: Friday, October 18.
A sequel to the gleefully violent zombie comedy has been rumored from the moment the original was released. But its stellar cast got extremely famous in the years after, and they finally had all their schedules free to do it. The new cast members include Rosario Dawson and, as Woody and Jesse’s duplicates, Luke Wilson and Thomas Middleditch. There’s almost certainly going to be some diminishing returns, but I’ve waited for this for so long, I can’t help but be excited.

Black and Blue.
Director: Deon Taylor.
Writer: Peter A. Dowling.
Cast: Naomie Harris, Frank Grillo, Reid Scott, Tyrese Gibson.
Opens: Friday, October 25.
Naomie Harris has been turning in great performances for more than 15 years, but she’s only recently gotten acclaim in the U.S., culminating in a much-deserved Oscar nomination for Moonlight. Here, she’s getting a rare lead role, playing a new cop who witness a fellow officer murder a civilian in cold blood. She had her body cam on, and now it’s a race against the clock to get back to the precinct to enter it into evidence, before a legion of corrupt cops – and the criminals they have working for them – take her out.

Jojo Rabbit.
Director: Taika Waititi.
Writer: Taika Waititi.
Cast: Roman Griffin Davis, Thomasin McKenzie, Scarlett Johansson, Taika Waititi.
The second-most controversial movie of the month (after Joker), Taika Waititi cashed in his Thor: Ragnarok capital to adapt this novel — a satire about a member of the Hitler Youth (Roman Griffin Davis) who discovers a Jewish girl (Thomasin McKenzie) hiding in his house. Oh, and his imaginary friend is Adolf Hitler (Waititi). There are a million ways this could go wrong, but it must have gone pretty well, as audiences at the Toronto International Film Festival gave it the Audience Choice Award.

The Lighthouse.
Director: Robert Eggers.
Writers: Robert Eggers, Max Eggers.
Cast: Willem Dafoe, Robert Pattinson.
I’m always down for something extremely weird that normal moviegoers will downright hate (see also: when we got angry comments for putting mother! on our Best Movies of 2017 list). Here, Robert Eggers follows up The Witch with this supernatural tale of a lighthouse keeper (Willem Dafoe) and his apprentice (Robert Pattinson) as they both slowly go mad to the point where deadly sea creatures may be involved.

Lucy in the Sky.
Director: Noah Hawley.
Writers: Noah Hawley, Brian C. Brown, Elliott DiGuiseppi.
Cast: Natalie Portman, Jon Hamm, Dan Stevens, Nick Offerman.
Noah Hawley has come a long way from the procedurals he used to write for in the mid-’00s. He’s now written one of my favorite novels (Before the Fall) and two of my favorite TV shows (Fargo and Legion) of the decade. Now he’s making his feature film debut, and it’s in a subgenre I love: Protagonists Processing Their Emotions in Space. Loosely inspired by Lisa Nowak – the astronaut who drove cross-country, allegedly wearing an adult diaper, to abduct the girlfriend of the man she was having an affair with – the film stars Natalie Portman as Lucy, who has trouble re-adjusting to life on Earth. Jon Hamm plays the fellow astronaut she begins an affair with, jeopardizing her position on a future Space Shuttle mission.

Parasite.
Director: Joon-ho Bong.
Writers: Joon-ho Bong, Jin Won Han.
Cast: Kang-ho Song, Sun-kyun Lee, Yeo-jeong Jo, Woo-sik Choi.
The buzz on this film has been deafening for months, ever since it won the Palme D’Or at Cannes. Bong Joon-ho is already regarded as a master of world cinema, hopping freely from genre to genre in both English and his native Korean. Most critics agree this is his best film yet — a vicious class satire about a poor family that passes themselves off as tutors for the kids of wealthy families, then move in and take over the houses. Given how good his past films are, I’m expecting this one will live up to the hype.

The Texas Chain Saw Massacre.
Director: Tobe Hooper.
Writers: Tobe Hooper, Kim Kenkel.
Cast: Gunnar Hansen, Marilyn Burns, Allen Danziger, Paul A. Partain, William Vail.
Playing At: Inwood Theatre.
Showing: Friday, October 4; Saturday, October 5.
Tobe Hooper’s low-budget horror classic has endured for 45 years because it’s still fucking terrifying. But it’s actually less gory than you remember. What he and his crew were able to do with limited funds is still astonishing, and none of its numerous sequels or remakes have ever come close to its power. If you’ve somehow never seen it, a midnight screening during the spookiest month of the year is the perfect setting.

Badlands.
Director: Terrence Malick.
Writer: Terrence Malick.
Cast: Martin Sheen, Sissy Spacek, Warren Oates, Ramon Bieri.
Playing At: The Magnolia.
Showing: Tuesday, October 15.
Terrence Malick’s debut feature is much different from his other works, a Bonnie and Clyde riff based on the true story of a 1950s couple who went on a killing spree. While it’s relatively short (only 93 minutes) and less obsessed with montages of natural wonders, it’s still a film of immense beauty and power, often considered ones of the best films ever made.

Dante’s Inferno.
Director: Henry Otto.
Writer: Edmund Goulding.
Cast: Ralph Lewis, Winifred Landis, William Scott, Josef Swickard.
Playing At: Texas Theatre.
Showing: Tuesday, October 15.
Goblin has written some of the most awesome film scores of all time, including Suspiria and Deep Red. Composer Maurizio Guarini has taken a break from that band to compose a new score for the silent horror classic Dante’s Inferno, based on the well-known section of Dante’s poem The Divine Comedy. This restored print of the 1911 film features Maurizio performing the score live, which should make for an extremely haunted evening.

The House of the Devil.
Director: Ti West.
Writer: Ti West.
Cast: Jocelin Donahue, Tom Noonan, Mary Woronov, Greta Gerwig.
Playing At: Alamo Drafthouse Cedars.
Showing: Monday, September 28.
It’s a classic set-up: Woman agrees to babysit for a creepy couple at a house way out in the middle of nowhere. But it’s how well Ti West executes that set-up that makes this a horror classic. The film is celebrating its 10th anniversary and seeing it with a crowd might be even better than in your house with all the lights out (which is how I first experienced it). If you can’t make the showing on the 28th, the Drafthouse’s Richardson location will also be showing it on the 30th.