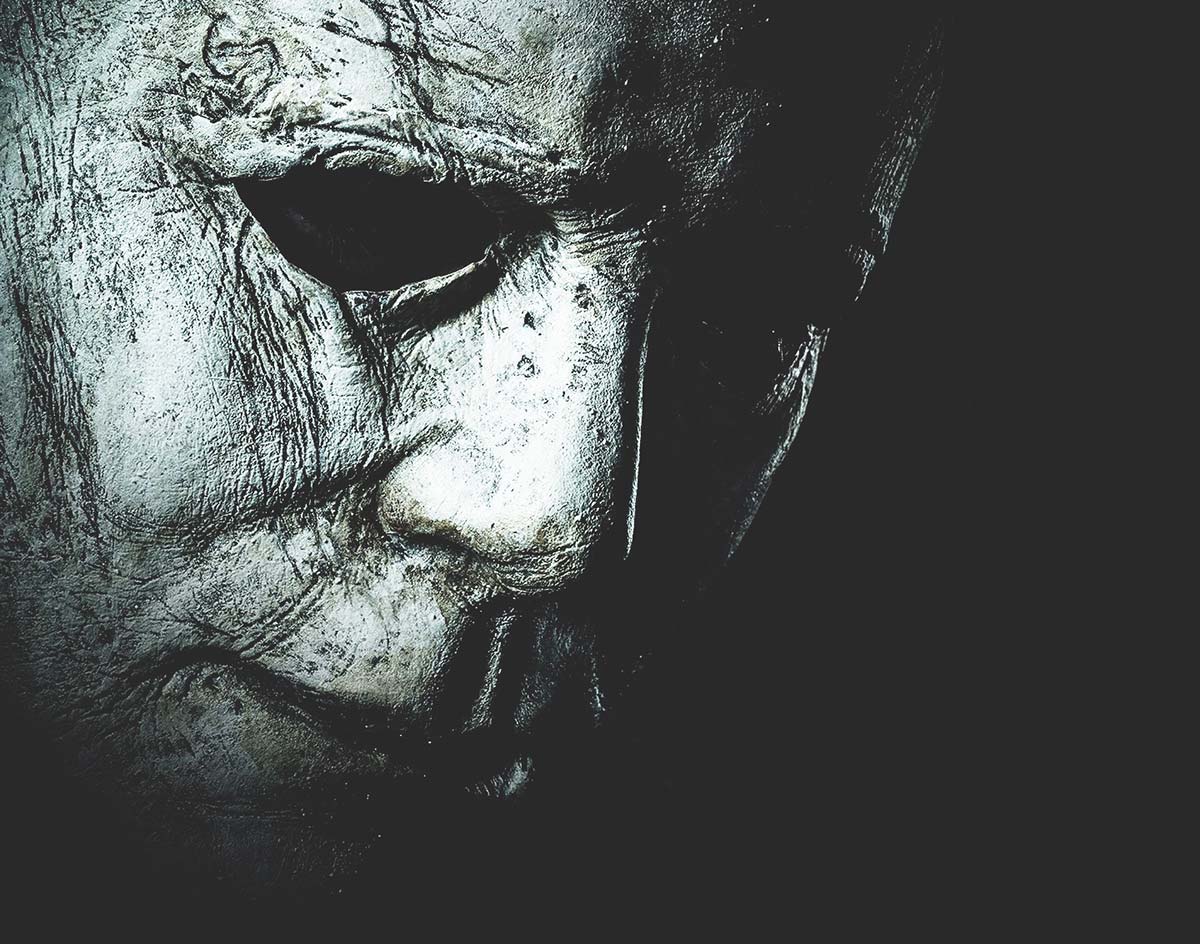 On Halloween, First Man, Bad Times at the El Royale And The Rest Of October 2018’s Top New Releases, Limited Showings and Repertory Screenings Around Dallas.

Moviegoers (and some film writers) tend to focus on the summer months and the period between Thanksgiving and New Year’s for the biggest releases.

But this year, the most ridiculously loaded month is October, which boasts two of my most anticipated movies of the fall, and several movies that you’ll almost certainly be hearing about next year as Oscar nominees.

(And that’s before we get to one of the most intriguing films of the year – Paul Greengrass’s 22 July, anyone? – which will premiere on Netflix.)

So, this month, I’ve added two extra films to preview, and also picked some more left-field choices for the repertory screenings.

There’s a lot to see.

The Hate U Give.
Director: George Tillman Jr.
Writer: Audrey Wells.
Cast: Amandla Stenberg, Regina Hall, Russell Hornsby, Common.
Opens: Friday, October 5.
One of the most important films of the year, this might be the film that finally gets mainstream audiences to understand the horror and impact of the U.S. epidemic of white police officers killing unarmed black men. Amandla Stenberg gives a (literal) star-making performance as Starr, who’s in the passenger seat when her friend is shot by a cop during a traffic stop. Though it occasionally has too much on its syllabus to teach its audiences, it’s powerful and unforgettable. Check out our full review here.

A Star Is Born.
Director: Bradley Cooper.
Writers: Eric Roth, Bradley Cooper, Will Fetters.
Cast: Bradley Cooper, Lady Gaga, Sam Elliott, Dave Chappelle.
Opens: Friday, October 5.
Though it was memed almost instantly, the fourth remake of this story has gotten nothing but raves so far. Bradley Cooper takes on the role of the alcoholic, aging rock star that takes a talented singer-songwriter (Lady Gaga) under his wing. It seemed unnecessary at first, but with all the talent involved (including Jason Isbell as its primary songwriter), this looks to be a riveting throwback.

Bad Times at the El Royale.
Director: Drew Goddard.
Writer: Drew Goddard.
Cast: Jeff Bridges, Jon Hamm, Dakota Johnson, Chris Hemsworth.
Opens: Friday, October 12.
Drew Goddard’s The Cabin in the Woods is one of my favorite movies of the decade — a hilarious deconstruction of horror tropes that had to guard its twists at all costs, which is why people thought it looked just like any other horror movie. Hopefully audiences are smarter this go-round, because his follow-up looks like it will do what that last effort couldn’t, but for crime films. Seven strangers are holed up at a dilapidated hotel at the California-Nevada border, and of course no one is exactly who they say they are. I don’t need to know anything else.

First Man.
Director: Damien Chazelle.
Writer: Josh Singer.
Cast: Ryan Gosling, Claire Foy, Jason Clarke, Kyle Chandler.
Opens: Friday, October 12.
I’ve decided that I’m just a sucker for any movie about astronauts. It doesn’t hurt that we’ve gotten so many great ones in recent years — Gravity, The Martian and even Alien: Covenant, just to name a few. So now that we’re getting a Neil Armstrong biopic from Damien Chazelle, who captured joy so well in La La Land and stress so well in Whiplash, you could say I’m… wait for it… over the moon.

Can You Ever Forgive Me?
Director: Marielle Heller.
Writers: Nicole Holofcener, Jeff Whitty.
Cast: Melissa McCarthy, Richard E. Grant, Ben Falcone, Jane Curtin.
As much as I’m generally a fan of McCarthy as a comic performer — seriously, go rent Life of the Party — she’s often even more compelling in dramatic work, even though she rarely gets to show it off. This is her big Oscar push, as she plays celebrity biographer Lee Israel, who eventually turned to forging letters from famous folks to make ends meet. Richard E. Grant brings his ultra-dry British wit as her best friend Jack. I’m also down on movies about famous frauds, though hopefully this one will be seen by more people than The Hoax or The Informant.

Mid90s.
Director: Jonah Hill.
Writer: Jonah Hill.
Cast: Sunny Suljic, Lucas Hedges, Na-Kel Smith, Katherine Waterston.
Jonah Hill shows off his writer-director chops in his first feature, a tribute to the skater culture he grew up with as a kid in the mid-’90s. Shooting lo-fi and in a square frame, he gets ground-level to all the tricks and inner turmoil of a lot of kids who turn to skating as an escape.

Monsters and Men.
Director: Reinaldo Marcus Green.
Writer: Reinaldo Marcus Green.
Cast: Anthony Ramos, John David Washington, Rob Morgan, Cara Buono.
If your heart can handle another movie about police shootings, this one looks more discussion-based than activism-based. Anthony Ramos plays Manny, a young baseball prospect who witnesses (and captures) a police shooting. If he doesn’t cause waves, he can push it deep into his mind and go on to enjoy a career in the MLB. Or he can release the video, show it to another cop (John David Washington) and see if any justice can be served. It looks like it’s a movie without any easy answers, which should make for a challenging experience.

American Genre Film Archive Secret Screening Anniversary Double Feature.
Directors: Unknown.
Writers: Unknown.
Cast: Unknown.
Playing At: Alamo Drafthouse Richardson.
Showing: Monday, October 8.
When DFW’s original Drafthouse location opened, it made secret screenings from the American Genre Film Archive a staple of its programming. To celebrate the location’s fifth anniversary, AGFA is doubling up with a rare back-to-back feature. There’s no telling what it’s going to be, but it will be out there, and presented on actual film.

Wait Until Dark.
Director: Terence Young.
Writers: Robert Carrington, Jane-Howard Carrington.
Cast: Audrey Hepburn, Alan Arkin, Richard Crenna, Efrem Zimbalist Jr.
Playing At: The Magnolia.
Showing: Tuesday, October 9.
Audrey Hepburn gives one of her best performances ever, in her Oscar-nominated turn as a blind woman fending off a trio of thieves. Films like Panic Room and Don’t Breathe owe a debt to this thriller, based on a popular play.

Halloween.
Director: John Carpenter.
Writers: John Carpenter, Debra Hill.
Cast: Jamie Lee Curtis, Donald Pleasence, Nancy Kyes, P.J. Soles.
Playing At: Inwood Theatre.
Showing: Friday, October 12; Saturday, October 13.
This is it. The original slasher. The movie that changed everything. The most successful independent movie of all time, until it was unseated by The Blair Witch Project more than 20 years later. Its scares might not seem so intense anymore, but everyone’s tried to rip it off, and none of its sequels and spin-offs have ever come close. True story: My parents saw this on one of their first dates in high school and my mom made my dad check the car before they got in because she was that freaked out. Now that’s the sign of a good horror movie.

Right in the Eye.
Director: Georges Méliès.
Writer: Georges Méliès.
Cast: Various.
Playing At: Texas Theatre.
Showing: Saturday, October 20.
Now, this is awesome. Georges Méliès is the greatest pioneer of early film, experimenting with techniques that are the basis for modern special effects. His silent works are still dazzling today, with a handmade quality that seems more personal and impressive than any CGI extravaganza. This show takes several of his films, playing a new live score for each one. This is a once-in-a-lifetime cinematic experience, folks. Don’t miss it.