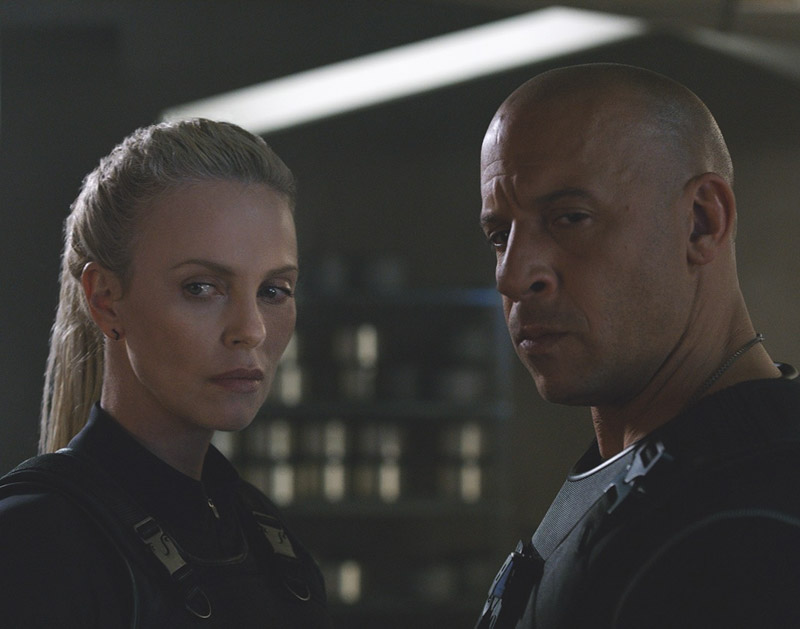 On The Fate of the Furious And The Rest Of The Month’s New Wide Releases, Limited Screenings And Repertory Showing Best Bets.

In this, the last month before we get bombarded with summer movies, we get a little bit of a break. Few of the films coming out this month feel like must-sees, and most are probably something you end up catching on Netflix later.

But it’s certainly an eclectic mix, with the biggest action movie of the year (The Fate of the Furious) going up against the smallest (Free Fire). Also, there are camp classics past (Beyond the Valley of the Dolls) and future (Unforgettable) getting some necessary screenings, and some monster movies that are really allegories (Colossal and Pan’s Labyrinth), along with a few completely bat-shit flicks (The Void and Twin Peaks: Fire Walk with Me) to boot.

The Fate of the Furious.
Director: F. Gary Gray.
Writer: Chris Morgan.
Cast: Dwayne Johnson, Vin Diesel, Charlize Theron, Kurt Russell.
Opens: Friday, April 14.
Remember when this series was just about street racing? That seems like a lifetime ago. Now these films are basically a multi-cultural Mission: Impossible nitrous boost. This is the first film without Paul Walker (save for the quasi-canonical Tokyo Drift) and new-to-the-series director F. Gary Gray (Straight Outta Compton) ups the stakes by having Dom (Vin Diesel) betray the group. Oh, and then there’s an Arctic submarine chase for some reason.

Free Fire.
Director: Ben Wheatley.
Writers: Ben Wheatley, Amy Jump.
Cast: Sharlto Copley, Brie Larson, Army Hammer, Cillian Murphy.
Opens: Friday, April 21.
Our critics are pretty split on British writer-director Ben Wheatley. Angela’s not the biggest fan. I, on the other hand, thought High-Rise was one of the best movies of 2016, and Javier has a tattoo of the guy. So it’s safe to say at least two of us are pumped for his latest, which all takes place in one location — a warehouse where an arms deal goes bad, and it’s every man and woman for him and herself. It’s probably going to be a bit of a mess, but it certainly looks like Wheatley’s funniest movie to date.

The Circle.
Director: James Ponsoldt.
Writers: James Ponsoldt, Dave Eggers.
Cast: Emma Watson, Tom Hanks, Bill Paxton, John Boyega.
Opens: Friday, April 28.
James Ponsoldt, one of the best independent directors working today, tackles Dave Eggers’ dystopian novel about a giant tech company whose obsession with putting cameras absolutely everywhere has some sinister implications. Obviously, there are some 1984 parallels here, but with private corporations instead of the government. This is going to be a risky movie to pull off without coming across as preachy or ludicrous, but with the right group of talent, I think they can pull this off.

[A note about limited releases: Unlike the big movies, which are booked months or years in advance, they don’t make it to Dallas on a regular schedule. It’s all up to the distributors and the theaters, which are usually independent. Check out the websites for both Angelikas (Dallas and Plano), both Drafthouses (Cedars and Richardson), the Magnolia and the Texas Theatre throughout the month to see what’s showing where.]

Colossal.
Director: Nacho Vigalondo.
Writer: Nacho Vigalondo.
Cast: Anne Hathaway, Jason Sudeikis, Dan Stevens, Tim Blake Nelson.
In this one, which Javier dug a whole lot, Anne Hathaway plays a recovering alcoholic trying to get her life back together after a break-up. Sounds straightforward — until you remember this is low-budget sci-fi auteur Nacho Vigalondo. The twist is there’s a giant monster terrorizing Seoul, South Korea, and there’s a deep connection between the two. I’ve avoided reading up anymore on this because I don’t want it spoiled, but reviews have been phenomenal, so I’m all in.

Gifted.
Director: Marc Webb.
Writer: Tom Flynn.
Cast: Chris Evans, McKenna Grace, Lindsay Duncan, Octavia Spencer.
Earnest courtroom dramas can be pretty dire, but this is such a great cast that I think they’ll elevate it. In it, Chris Evans plays the adopted father of Mary, a child prodigy. They seem to get along great until Mary’s grandmother (Lindsay Duncan) sues for custody. Whether it earns it or not, I’m probably going to bawl.

The Void.
Directors: Jeremy Gillespie, Steven Kostanski.
Writers: Jeremy Gillespie, Steven Kostanski.
Cast: Ellen Wong, Kathleen Munroe, Kenneth Welsh, Aaron Poole.
I wasn’t crazy about the 2011 prequel/reboot of The Thing (itself a “re-imagining” of the 1951 classic), but I am all for this homage, which takes place in a quarantined hospital. From the extremely gory ads, I’m thinking this is going less for a meditation on an enemy hiding in plain sight, and more for absolutely disgusting body horror.

Pan’s Labyrinth.
Director: Guillermo Del Toro.
Writer: Guillermo Del Toro.
Cast: Ivana Baquero, Ariadna Gil, Sergi Lopez, Maribel Verdu.
Playing At: Inwood Theatre.
Showing: Friday, April 7; Saturday, April 8.
It’s still hard to believe it’s already been more than 10 years since Guillermo del Toro’s Oscar-winning fantasy premiered. This was a formative movie for me as a budding cinephile and it’s rapturous on the big screen. That said, seeing this at midnight might give you nightmares of the Pale Man after, so be forewarned.

Twin Peaks: Fire Walk with Me.
Director: David Lynch.
Writers: David Lynch, Robert Engels.
Cast: Sheryl Lee, Ray Wise, Moira Kelly, Kyle McLachlan.
Playing At: Texas Theatre.
Showing: Friday, April 14.
At the time, David Lynch’s prequel to his well-regarded TV series was trashed. But it’s enjoyed a steady reevaluation in the ensuing decades. I recently saw this on the big screen, and I have to say it’s among his best works. It’s completely unhinged. It’s even darker than the show, with the supernatural elements becoming all too real and tragic. All this, plus one nutty David Bowie cameo!

The Fast & The Furious Marathon.
Directors: Various.
Writers: Various.
Cast: Vin Diesel, Paul Walker, Michelle Rodriguez, Jordana Brewster.
Playing At: Alamo Drafthouse Richardson.
Showing: Saturday, April 15.
The Fast & The Furious series is still mind-blowing — not for the movies themselves, but what they accomplished. The first film was a landmark in stupidity (and a massive hit), but cast egos and other ridiculousness kept it from being a full-fledged franchise. Then the band got back together in 2009 and never looked back, constantly expanding the cast to become the most diverse in mainstream movies, all while ditching any pretense of being about racing into its suddenly worldwide adventure flicks. Let’s be clear: It’s not supposed to work like this. A series isn’t supposed to resurrect like this. It’s not supposed to have its best entry a decade after its first one. Everyone’s supposed to be tired by this point, not still having a blast. Richardson’s Drafthouse plans for you to OD on adrenaline by showing all eight films in one day.

Beyond the Valley of the Dolls.
Director: Russ Meyer.
Writers: Russ Meyer, Roger Ebert.
Cast: Dolly Read, Cynthia Myers, Marcia McBroom, John LaZar.
Playing At: The Magnolia.
Showing: Tuesday, April 25.
Roger Ebert is undoubtedly one of the greatest film critics of all time. But he’s also one of the worst screenwriters ever — at least judging by his one at-bat. Beyond the Valley of the Dolls has nothing to do with Valley of the Dolls; it’s just a framework for Ebert and Russ Meyer to string together scenes of dancing, drugs and lots and lots of nudity. Some people swear by this cult classic. I’m not one of them, but it does demand to be seen just because it’s so bizarre and silly, and it will leave you wondering how a Pulitzer Prize-winning writer comes up with something like this. Ebert once described the film as “like a movie that got made by accident when the lunatics took over the asylum,” and that could not be more accurate.