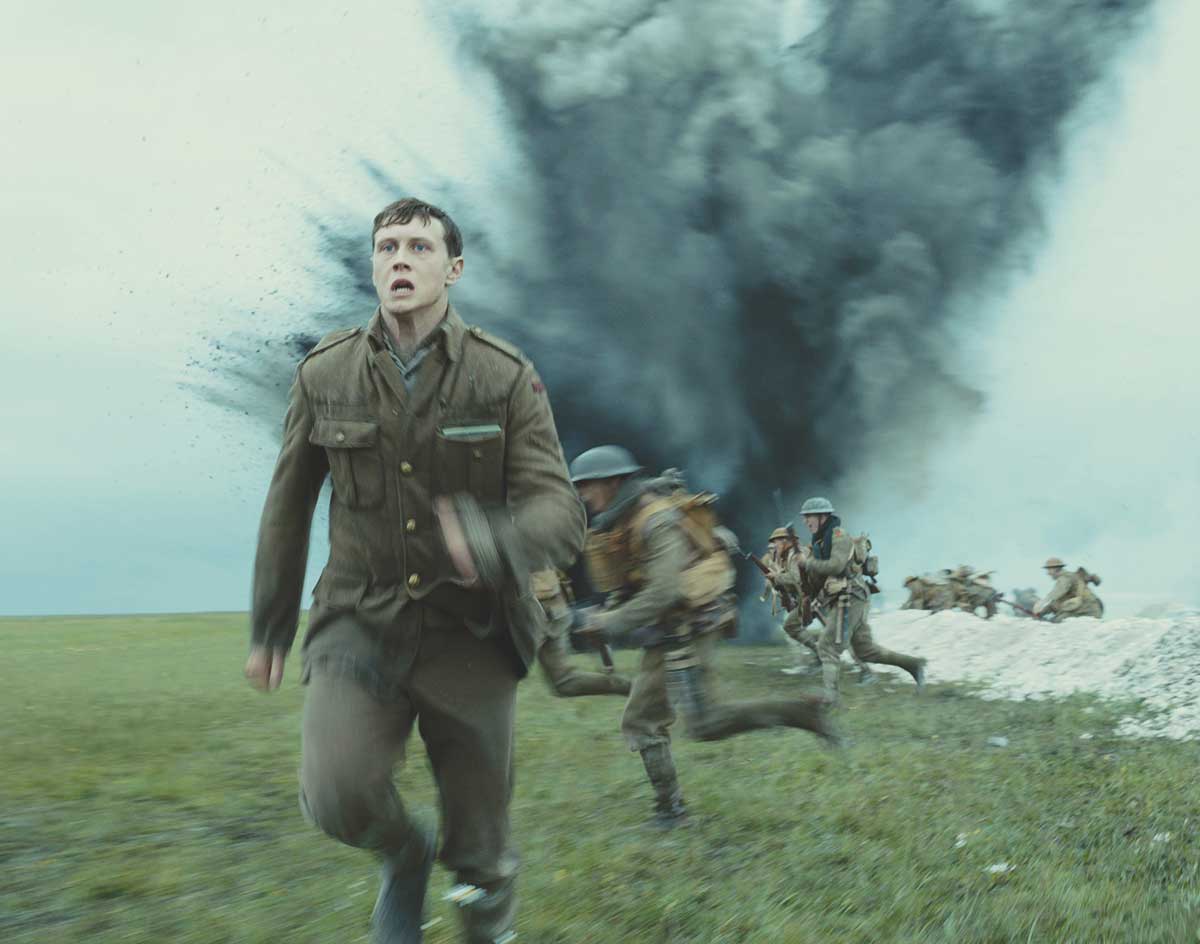 On 1917, The Gentleman, Just Mercy And The Rest Of January 2020’s Top New Releases, Limited Showings And Repertory Screenings In And Around Dallas.

As usual, January is an odd mix of the Oscar contenders that are finally getting a wide release, and the garbage that studios had left over and is now dumping on an unsuspecting public — about half and half, by the looks of it.

But at least we’ve got a new bonkers Nicolas Cage movie and a rarely seen independent made-in-Texas gem at the Texas Theatre to look forward to!

Read on for more details.

1917.
Director: Sam Mendes.
Writers: Sam Mendes, Krysty Wilson-Cairns.
Cast: Dean-Charles Chapman, George MacKay, Colin Firth, Benedict Cumberbatch.
Opens: Friday, January 10.
My No. 2 film of 2019 is probably the best movie you’ll see for a while this year. This World War I epic is a thrilling adventure that features some of the most stunning cinematography you’ll ever see. This is one you should run — not walk — to see in theaters, and preferably on as big a screen as you can. Don’t wait for streaming. Go now.

Just Mercy.
Director: Destin Daniel Cretton.
Writers: Destin Daniel Cretton, Andrew Lanham.
Cast: Michael B. Jordan, Brie Larson, Jamie Foxx, Rob Morgan.
Opens: Friday, January 10.
Based on the true story of Walter McMillan, who was wrongfully convicted of murder in Alabama, this drama has gotten a lot of praise based on Jamie Foxx’s performance. Michael B. Jordan plays the lawyer who took on the case to try to free him from prison. Expect a lot of big acting, and a lot of righteous anger, at a justice system that’s still targeted against minorities.

The Gentlemen.
Director: Guy Ritchie.
Writer: Guy Ritchie.
Cast: Matthew McConaughey, Henry Golding, Charlie Hunnam, Hugh Grant.
Opens: Friday, January 24.
After two weak attempts at big-budget adaptations (King Arthur and Aladdin), Guy Ritchie goes back to his roots with this chatty, hyper-violent caper. McConaughey plays the owner of a legal weed empire who goes to war with the gang led by Henry Golding that wants to take over his business. If it’s anywhere near as good as Snatch or The Man from U.N.C.L.E., this will be one of my favorites of the year.

The Rhythm Section.
Director: Reed Morano.
Writer: Mark Burnell.
Cast: Blake Lively, Jude Law, Sterling K. Brown, Max Casella.
Opens: Friday, January 31.
This one’s moved release dates a lot, which is never a good sign. But I’m still excited for this thriller from Reed Morano, who is part of the creative team behind Hulu’s The Handmaid’s Tale. Blake Lively plays a woman who goes deep undercover to try to exact revenge on the terrorist cell that bombed a plane carrying her whole family.

Clemency.
Director: Chinonye Chukwu.
Writer: Chinonye Chukwu.
Cast: Alfre Woodard, Aldis Hodge, Wendell Pierce, Richard Schiff.
If you’d like some more movies about how corrupt our justice system is, there’s also Clemency, which features the always great Alfre Woodard as a warden deciding whether to go through with the execution of a Death Row inmate (Aldis Hodge). The film won the biggest prize at Sundance in 2019, so expect something extremely powerful.

Color Out of Space.
Director: Richard Stanley.
Writer: Richard Stanley.
Cast: Nicolas Cage, Madeline Arthur, Joely Richardson, Tommy Chong.
Nicolas Cage in an adaptation of an H.P. Lovecraft story? I don’t know what else needs to be said, at least for fans of batshit crazy movies. This is Richard Stanley’s first fictional feature since 1992 — and first since getting fired early on from 1996’s disastrous The Island of Dr. Moreau.

Les Misérables.
Director: Ladj Ly.
Writers: Ladj Ly, Giordano Gederlini, Alexis Manenti.
Cast: Damien Bonnard, Alexis Manenti, Djibril Zonga, Issa Perica.
No, this isn’t another adaptation of the Victor Hugo novel or the musical. This is France’s official entry to the Oscars — a harrowing thriller about police corruption in Paris. Something tells me that, like America, they also have a big problem with racism over there.

The Last Picture Show.
Director: Peter Bogdanovich.
Writers: Peter Bogdanovich, Larry McMurtry.
Cast: Jeff Bridges, Timothy Bottoms, Cybill Shepherd, Ben Johnson.
Playing At: The Magnolia.
Showing: Tuesday, January 7.
The Last Picture Show is a tragic but often hilarious story about growing up in a nowhere Texas town in the ’50s. The cast is terrific top to bottom, including Ben Johnson and Cloris Leachman, who both won Oscars as the world-weary older generation who care about the young leads but still end up hurt by their selfishness. It’s really one of the greatest movies ever made.

The Legend of Boggy Creek.
Director: Charles B. Pierce.
Writer: Earl E. Smith.
Cast: Willie E. Smith, John P. Hixon, Vern Stierman, Judy Haltom.
Playing At: Texas Theatre.
Showing: Friday, January 10; Saturday, January 11.
This super low-budget thriller was one of the biggest independent hits of the ’70s. Filmed in and around Arkansas, it capitalized on the Bigfoot craze and made upwards of $20 million on a $100,000 budget. The recently restored print is one of the few legal releases the film has seen since its original run.

A Clockwork Orange.
Director: Stanley Kubrick.
Writer: Stanley Kubrick.
Cast: Malcolm McDowell, Patrick Magee, Carl Duering, Sheila Reynor.
Playing At: Inwood Theatre.
Showing: Friday, January 10; Saturday, January 11.
Stanley Kubrick’s extremely violent adaptation of Anthony Burgess’ dystopian sci-fi novel hasn’t lost any of its power, although it’s maybe not quite as shocking after nearly 50 years of far more violent movies, shows and video games. What stuck out to me on my most recent revisit was the horrors of angry young men growing up to become the police officers who patrol the streets they used to roam.

Barry Lyndon.
Director: Stanley Kubrick.
Writer: Stanley Kubrick.
Cast: Ryan O’Neal, Marisa Berenson, Patrick Magee, Steven Berkoff.
Playing At: Alamo Drafthouse Cedars.
Showing: Sunday, January 19.
If you prefer your Kubrick a little lighter, there’s his gorgeous follow-up, an epic story about a British rapscallion (Ryan O’Neal) and his many misadventures. I long thought this would be boring — until I saw a showing of it on the big screen and was floored by how hilarious and beautiful it was. The film will make its way to other locations throughout the month. Check the Alamo Drafthouse website for other showtimes.