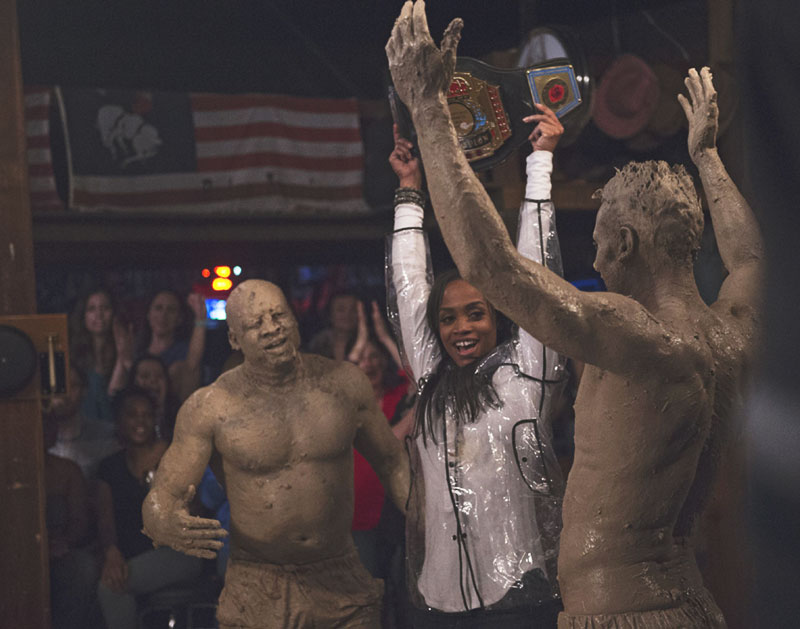 This Week On The Bachelorette, Shirts Come Off, Bros Lose Confidence And Rachel Finally Sends The Annoying “Waboom” Guy Home.

When we last left our Bachelorette, she was having a cocktail party before the rose ceremony when DeMario shows back up after having already been asked to leave.

This being a reality show that thrives on drama, Rachel’s third episode finds her agreeing to hear DeMario out. And so DeMario babbles on and gives a half-hearted I-now-lost-20,000-Instagram-followers story only for Rachel to once again give him the boot. At the rose ceremony, Rachel lets go of more drama by letting Lucas (the “Waboom” guy) and Blake go home.

Then, in perhaps one of the funniest moments of the season thus far, Lucas and Blake confront each other as they’re leaving the mansion. What follows is a childish, ridiculous, and quite funny skirmish. See you in Paradise, fellas!

After that action, Rachel goes on two group dates and a one-on-one date. Better yet, a villain started making his move.

Anyway, let’s take a look at all that action numerically — y’know, since that’s what we do.

“I Love You” Utterances: 1. Seriously! In week three, Fred says in his exit interview that he’s falling in love with Rachel. Granted, Fred has known Rachel since grade school. But still! Dude’s been on two group dates with her and that’s it. Man, this show is so great.

Shirtless Men: 14! Both group dates require the men to take their shirts off. The first group goes on Ellen, and they enter the crowd to do their best Magic Mike impressions. Then, the second group date mud wrestles. Both group dates were nice on the eyes.

Kisses/Make-Outs: 8. In a very awkward moment, Fred asks if he can kiss Rachel, then continues to talk before he even kisses her. Fred thinks there are fireworks; Rachel does not, and sends him home almost immediately after locking lips. Ouch.

Confrontations: 5. There are lots this week! Three of the five include Eric being confronted by the guys and/or him confronting various guys.

Wabooms: 10. Since Lucas does not get a rose, these might be the last Wabooms we hear until the Men Tell All episode.

Alex the Russian seems to cut loose on the Ellen date, coming across as funny and charming and earning the group date rose. Eric, meanwhile, seems to be this year’s version of the contestant who doesn’t do well in the process of this show, gets in his own head and starts questioning everything around him. The editors aren’t doing him any favors, either, making him come across as extremely unsure of himself. Somehow, though, Rachel still seems to dig him.

Lee is beginning to show his true colors. He’s really the worst type of villain — nice and sweet to your face, but totally different in his interviews. He seems to revel in irritating others and very much enjoys knocking Eric’s confidence down even farther.

Of course this week ends with another cliffhanger, leaving the rose ceremony to again happen at the beginning of the next episode. Is this a new trend? Maybe, maybe not. Honestly, other than some shirtless guys and the Eric confrontations, this episode isn’t particularly eventful, so we’re kind of reaching here. But, hey, now that the Lucas and Blake drama is done, maybe we can finally get ready for the Lee drama to begin.