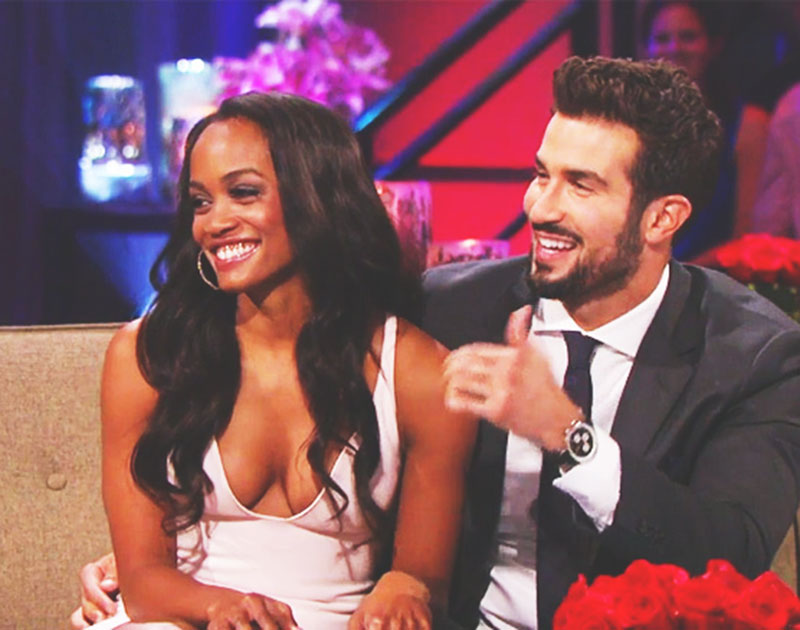 Well, We Told You Guys That Dallas Lawyer Rachel Lindsay Was Going To End Up With Colombian Suitor Bryan On This Season Of The Bachelorette…

It’s finally over, y’all. After a three-hour finale — and just as I predicted back in Week 7 — Dallas lawyer Rachel Lindsay went and accepted the proposal of Bryan.

She found love! Well, we’ll see: The track record for Bachelorettes marrying their final guy is better than their Bachelor counterparts, but it still ain’t super great.

Will these two engaged lovebirds last? Time will tell.

But how’d we get here? Well, The Bachelorette‘s producers decided to shake up their finale a bit by having the “live” portion interwoven with the drama. Rachel was live on stage the entire show with Chris Harrison as she watched the taped portions of the finale for the first time since she lived those moments out three months ago. After each segment, she would share her thoughts or confront one of the guys she let go. It was an interesting way to have the finale because, let’s face it, most of us would shut this thing off the last hour when they normally do those interviews.

Still, it was fairly obvious from the get go that the final two were Bryan and Peter. Seriously. We had to finish Peter’s overnight date then have Bryan’s overnight date, and the first time we even saw Eric this episode was during the rose ceremony in which he got the boot. Sorry, bud!

Then, before the final rose ceremony, we had final dates. Of course Bryan’s date went smoothly — dude’s a smooth talker! Sometimes too smooth, though. He sounds like he researched the most common answers to “what to say on The Bachelorette to get to the finals” and just regurgitated them here to Rachel. Either way, it was clear: He was committed and ready to propose.

Peter, on the other hand, was still not sure if he wanted to propose. Wanna know why? Because he’s a normal human. He’d just been through two months of filming, and he said he loves Rachel, but he just wasn’t sure if he wanted to ask the question. Alas, that wasn’t good enough for our girl Rachel. And so they decided to break up, leaving Bryan all alone by Rachel’s side.

Did Bryan propose as promised? Bet your ass he did. And, yup, Rachel said yes.

“I Love You” Utterances: 6. This was a love-heavy episode! Rachel said she loved Eric but wasn’t in love with Eric — ouch. Peter finally said he loved Rachel when she was leaving him for the last time, and then she said it back to him. And, of course, Bryan and Rachel exchanged sentiments of love multiple times. Basically, everyone who could say they were in love in this episode said it.

Shirtless Dudes: 2. The ab gods blessed us with a shirtless Peter and Bryan each in the mornings after their overnights with Rachel.

Cries: 5. There was always going to be a lot of crying this episode, to be honest. And a lot of it had to do with Peter. He cried when Rachel said she was leaving him forever. Rachel cried four different times over him. Relationships built on tears rarely last, do they?

Exes Mentioned: 1. Rachel brought up her ex-boyfriend of five years because she was worried about how Peter reminded her of that ex. She thought she and her ex were going to get married, but he never was ready. Hence her apprehension with Peter. It all makes sense!

Confrontations: 1. During the live portion of the show, Rachel and Peter had one of the more emotional confrontations of the season. He was still upset, thinking he might have made a mistake in how he handled things with Rachel. She, meanwhile, made it clear that there were more reasons to why she let him go, and that it wasn’t just the fact that he wasn’t going to propose. Riiiiight.

Aaaaaaaaaaaaaaaand that’s it. Rachel and Bryan will make their media rounds, and then settle down… somewhere. Maybe here in Rachel’s native Dallas? We don’t know. The newly engaged pair hasn’t decided where to move yet, at least not publicly.

It’s been fun watching this season with our hometown girl, though. She was genuinely likable as a lead, and we wish her nothing but the best.

We also wish Bachelor in Paradise would get here, like, tomorrow. Are you guys going to be watching? You know I am! Because that’s looking like a hot mess. Which is the best kind of mess, really.