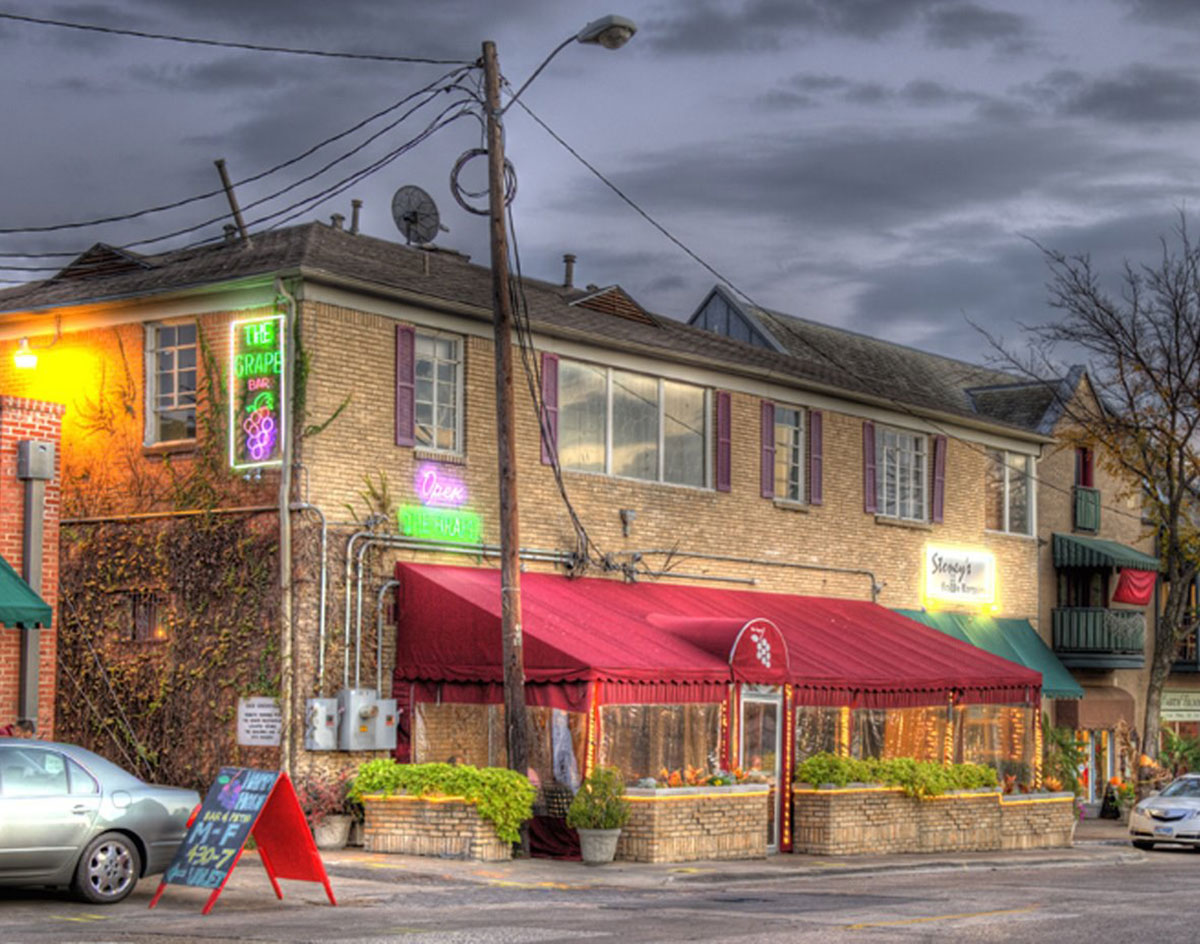 The Revered Restaurant, One Of Dallas’ All-Time Great Date-Night Spots And Home To One Of The State’s Top Hamburgers, Is Set To Close In October.

Update at 2:20 p.m. on September 12, 2019: The Grape co-owner Brian Luscher says that, within four hours of this article going live, Open Table bookings for his restaurant’s final 30 days were booked to “110 percent.” The phone at the Lower Greenville landmark, meanwhile, has barely stopped ringing since the news of its closure broke.

“The outpouring of love has been immediate and swift,” Luscher says when reached by phone this afternoon. “We have 20-deep waiting lists for certain reservation times. We’re gonna get our asses smoked for the next 27 or however many days – but we are going to be able to land this plane softly.”

In other words: Hopeful last-minute diners who have yet to snag a reservation could be shit outta luck at this point. The voicemail for The Grape’s main phone line currently features co-owner Courtney Luscher exasperatedly announcing that the restaurant is no longer accepting reservations by phone. Instead, would-be nostalgia tourists have two options: 1) Keep refreshing The Grape’s Open Table page, hoping that cancellations might come through the system and open up some reservation slots; or 2) try for some of the limited, walk-up openings that the restaurant has pulled aside from its reservation bookings while knowing heading in that any possible seating could draw a couple-hours-long wait if it comes at all.

Also, no surprise here, but, in order to keep up with demand, the restaurant will not be hosting its usual happy hour offerings during this final run.

“If you snooze, you lose, I guess,” Brian Luscher adds.

Long story short: Here’s hoping you were quick on the draw in the wake of this news breaking, Grape lovers!

The Grape, one of Dallas’ most revered dining destinations, will close its doors on October 9.

At the end of service this past Sunday night, Brian and Courtney Luscher — the couple has owned the Lower Greenville bistro since 2007 — alerted staff of impending plans to cesse operations at the beloved restaurant.

Opened in 1972 by Kathy McDaniel and Charlotte Parker, The Grape has long been a Dallas dining landmark. Its chef-driven menu, approachable price points and cozy neighborhood setting have helped established it as one of best date-night spots in the city. In recent years, its elevated burger — only available to order on Sundays and on Monday nights — has managed to consistently live up to the hype earned from Texas Monthly naming it the No. 1 burger in the state in 2009.

But rather than renew The Grape’s soon-to-expire lease agreement and reapply for its almost-lapsed TABC license, the Luschers have elected to put their time and energies toward family and other culinary ventures moving forward.

Unlike the recent closures of other cherished Dallas cultural fixtures, The Grape’s end does not appear to be the result of real-estate development greed: Co-owner Brian Luscher says McDaniel and Parker, who still own the building that houses the restaurant, remain hopeful that The Grape could live on in some capacity after its shuttering in the fall; Luscher says he is aware of discussions with at least one “established” area culinary player who is considering taking over the reins.

Regardless of if that sliver of hope pans out, the Luscher’s chapter at The Grape’s helm will end in mid-October.

“I’ve been tossing and turning over this [decision] for three months,” Luscher says when reached by phone. “It’s not something we’ve taken lightly. We know this place’s reputation as a Dallas institution.”

To that end, Luscher says it’s important that he and his team give the restaurant its due send-off. As such, The Grape will continue taking reservations and operating with business as usual through its final service on Wednesday, October 9. Given its romantic reputation — beyond anniversaries and birthdays, Luscher estimates that The Grape sees at least two or three marriage proposals each month, and sometimes substantially more — Luscher expects that a number of past diners will want to come by and pay their respects one last time between now and the end. He should know: Luscher experienced a similar rush of last-minute support when he announced that he was closing his adored Deep Ellum hot dog and burger joint Luscher’s Red Hots in 2016. (Ruins now sits in that same spot.)

“We’re going to be landing this plane properly,” Luscher says of his plans for The Grape’s final days. “This won’t be some emergency landing.”

Even after disembarking from The Grape, Luscher says he plans to maintain his strong presence in the Dallas dining landscape. The Luscher’s Post Oak Red Hots brand that Luscher’s Red Hots spawned will keep operating as it has — Luscher says it currently produces around 3,500 pounds of sausages each month — and it could soon be adding more retail outlets to go with its still-growing wholesale footprint. Luscher also plans to continue teaching American regional cuisine courses at El Centro College. He even teases the possibility of a “sort of Red Hots 2.0” location opening sooner than later as part of a new development being built within city limits.

Even so, after 15 years of working at the spot — he was an employee before an owner — Luscher becomes pensive when considering a life without The Grape. Its customers will no doubt feel the same way upon hearing news of its planned goodbye.

“It’s bittersweet,” Luscher says. “It’s not like we’re tossing double birds to the sky and smoking Camels on the way out. I’m gonna miss the ol’ gal.”