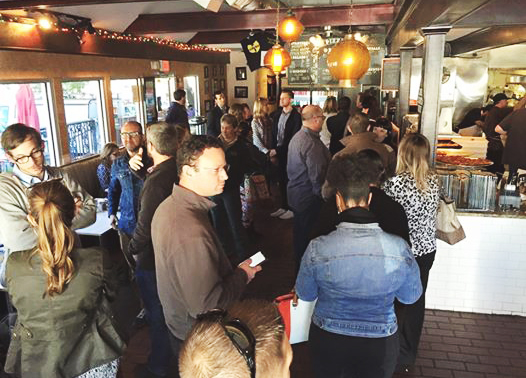 People Are Rushing To Eat At Zoli’s Before It Closes, And That’s Kinda Fucked Up!

It’s been known for a while that, due to planned developments in the Bishop Arts area it currently calls home, time’s been running out on Zoli’s NY Pizza Tavern. Yesterday, the exact end date — this coming Sunday, February 14 — became official, is all.

That’s all that happened.

And, really, it’s not even that big of a deal. Like I said: Anyone paying even the slightest amount of attention to this stuff — say, dedicated customers — should’ve known this was coming. Zoli’s owner Jay Jerrier certainly hasn’t hid this inevitability from anyone. He has long been open about the fact that his pizza joint’s closing is a preemptive action. He’s explicitly stated on numerous occasions that his business will indeed go on, being pretty up front about the fact that he never really dug this initial location that much in the first place and that he’s perfectly happy with an excuse to switch things up. In fact, yesterday’s reveal even came with word that he’s closing in on a new home for Zoli’s in North Dallas.

Still, predictable as the sun’s rising, Dallasites decided that, with unveiling of the final date for this Zoli’s, now is the time for a collective freak-out.

Jerrier, who also runs the Cane Rosso pizza chain and its five current locations across the region (with more coming, along with spots in Austin and Houston too), adds when pressed for more details that Zoli’s was outselling every location he operates today as of 1 p.m. He notes that these numbers include Cane Rosso’s flagship Deep Ellum location, which he describes as three times as big and twice as expensive.

“[I’m] surprised at the turnout,” Jerrier says. “We’ve been there for two-and-a-half years, and I guarantee Papa John’s down the street [usually] sells way more pizza than us.”

But should he really be surprised at this sudden outpouring of love? Please.

This is what Dallas does. We show up to support businesses on their way out, hoping no one noticed how our presence was absent when it actually could’ve done any good.

Can we talk for a second about just how fucked up this is? It’s really fucked up! As he happily pads his wallet — as previously noted, Zoli’s is not going out of business, just moving, and it’s gonna be totally fine — even Jerrier couldn’t help but see what we see in that photo he posted.

“[It’s the] same gnashing of teeth when Lakewood Theater was closing,” he says of Dallas’ penchant for crying foul after the fact.

These teeth-gnashers, it should be noted, are the same people who showed up outraged and ready to claim the Lakewood Theater’s discarded seats as keepsakes, blissfully unaware of the ironic fact that they wouldn’t be able to score such finds had their butts been in them at any point in recent history. They’re the same people who flooded the Amsterdam Bar on its final night after the bar announced its impending closure, that reveal apparently having spurred them into remembering all the good times they so clearly forgot they’d had there. They’re the same people who stopped by when it seemed like Deep Ellum’s July Alley was done — and even did so with such strength that the place ended up staying open quite a bit longer until that well too dried up.

It’s the same story over and over again with these people, and it needs to be said: These people are the fucking worst. They’re nostalgia tourists who reap an almost sick cultural cache from telling their friends that they too were able to hop on a bandwagon at the last minute. If they weren’t, these supposedly revered places wouldn’t be going out of business.

Speaking of shittiness: These people are different from, but cut from the same cloth as the White Knights who ride in at the last minute and give shits about buildings only when the demolition crews finally arrive — and certainly no better. Oh, we’re supposed to care about a building that no one expressed interest in using as anything more than a storage space before it was gone? That’s not how it works. If you enjoy something, you support it while it’s around; you don’t show up to pat its ass as it walks out the door.

But that’s what Dallas does. And, worse than pathetic, it’s just fucking tiresome at this point.

One of the most frequent criticisms lobbed at Dallas is that it doesn’t care about its own history. But that’s a total bullshit claim. Dallas loves its history — every bit as much as it loves dreaming about its future all doe-eyed.

What Dallas doesn’t bother itself with is the present.

Even when this unfortunate fact rears its head along with a slice or two of greasy, cheesy goodness, it’s fucking gross.