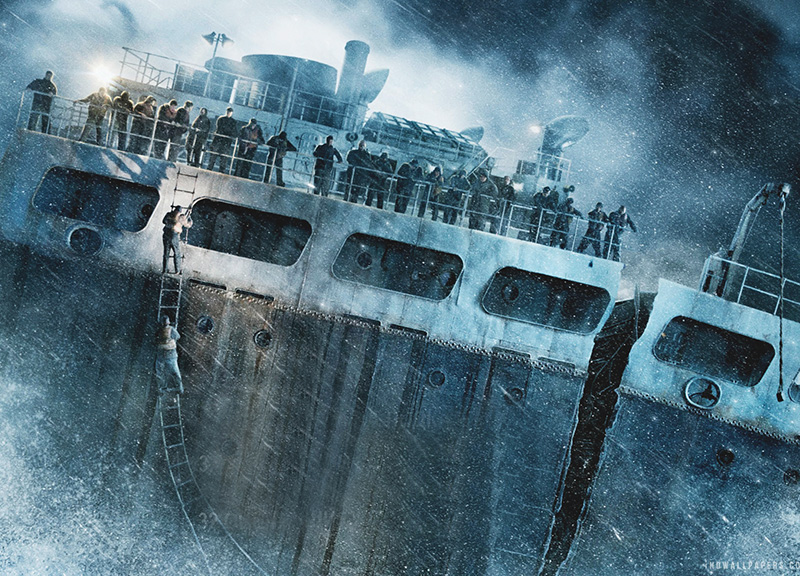 Man-versus-nature movies aren't exactly a new idea, but The Finest Hours, which features one of the best performances of Chris Pine's career, is one the most thrilling takes on the concept to hit theaters in some time.

It's an emotional story, its writing is sharp and, perhaps best of all, it refuses to dumb itself down for the sake of the audience.

Based on the true story of what is still considered the Coast Guard’s most dangerous rescue missions, The Finest Hours tells the 1952 tale of how four Coast Guardsmen in a tiny boat valiantly saved the lives of 32 sailors stranded off the coast of Massachusetts in a sinking ship during an especially harsh storm. While the movie mostly focuses on the rescue, it also focuses some on the rescuers loved ones back on the mainland as they too try to get through this storm.

Historically, Pine relies on his charisma and physicality to bring his characters to life, but in this instance, it really feels like he’s just acting his ass off. Playing Bernie Webber, a shy but dutiful man, our first introduction to him comes outside of a diner, where he's supposed to meet a blind date, Miriam (Holliday Grainger). He's freaking out, seemingly insecure that he's wearing the wrong shirt, although it turns out there's actually deeper issues at play from his past — concerns stemming from an earlier incident that defines him as a person and informs every decision that we see him make in the movie.

Without spoiling how, let's just say this: Webber is a man who always hangs his head low and aims to avoid ruffling any feathers. So, when his commanding officer (Eric Bana) orders him to go out and look for the in-danger sailors on a small, inadequate boat during a bad, bad storm, he doesn't put a fight. Rather, he presses forward when the going gets tough.

The scenes in the wrecked ship are equally as impressive, with Casey Affleck turning in a strong performance as an unpopular mechanic who must figure out how to keep his fellow sailors alive and away from each other's throat after a collision with an oil tanker leaves their ship split in two. Some of the best scenes in the movie come as the sailors try to stay alive through teamwork and problem-solving. Theirs is a somewhat familiar predicament, but one that's pulled off well thanks to cast chemistry. Immediately upon meeting these shipmates, these character feel familiar — not because they necessarily fit nicely into stock secondary character archetypes, which they kind of do, but mostly because they bring a fresh attitude to the predicament.

The only time the movie really falters is when it switches its focus back to the townspeople and Miriam. On her own, Miriam's a pretty badass character — she's confident and doesn't give a damn about what anyone thinks — but every time she deals with her the wet blankets masquerading as people around town, it kills the momentum of the tense action scenes happening out at sea.

And that action is quite impressive, and especially so in 3-D, which is used to great effect here to portray the punishing rains and crashing waves.

In all, The Finest Hours is a nice surprise during a time of year that otherwise historically stands as a film wasteland. No, it won't earn itself an Oscar nomination, but it's the kind of film that deserves to be enjoyed in a theater, on a big screen.