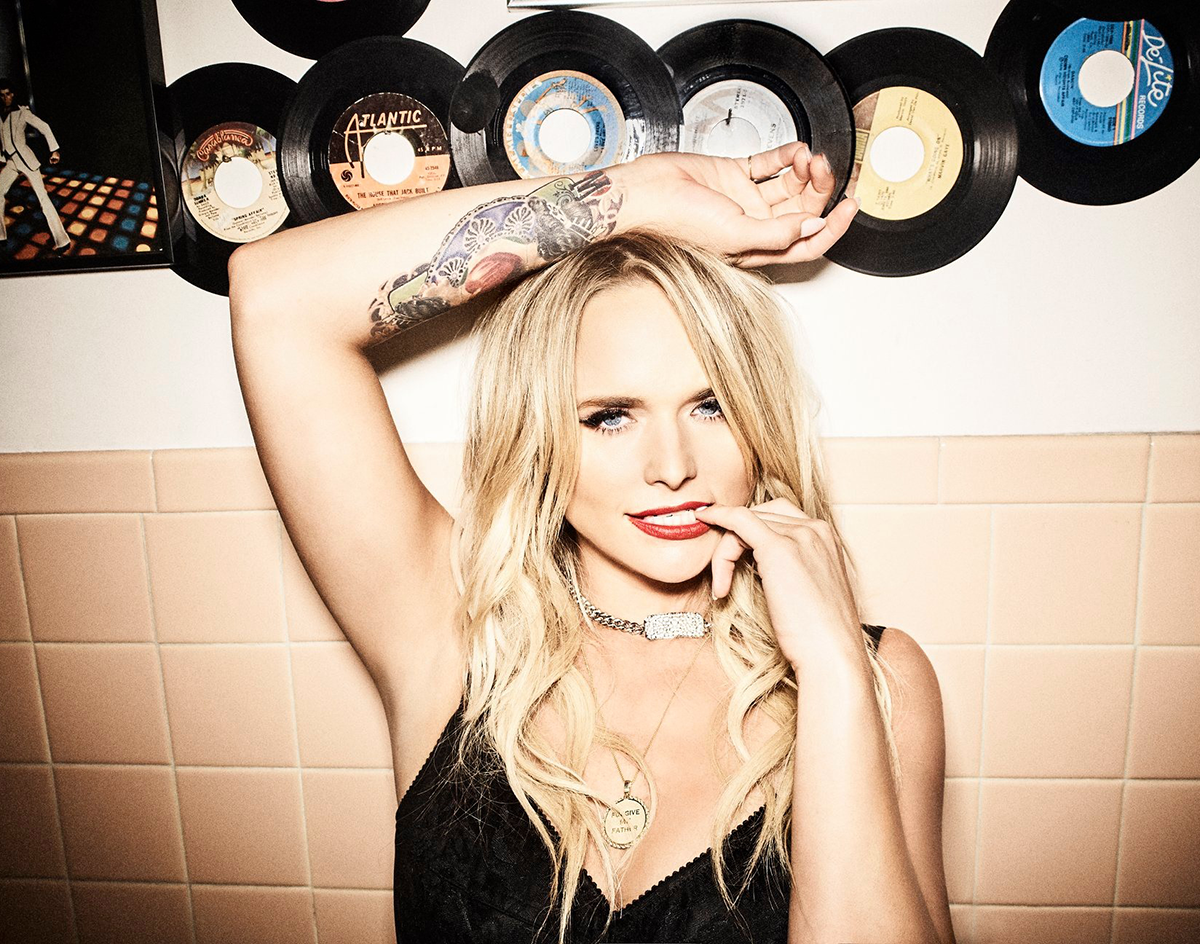 Do Somethin’ Bad With Miranda Lambert, HandClap For Fitz & The Tantrums And Get Your License To Ill At Three Links’ Staff Infection. Plus More!

The most handsome man in the world is Robert Pattinson, apparently.

Any Twilight-obsessed teenager in the late 2000s could have told you as much, but British gossip rag the Daily Mail made the claim on February 4 with the help of plastic surgeon Julian De Silva.

De Silva compiled a list of the ten most handsome men in the world, based on the mathematical concept of The Golden Ratio of Phi, which the Daily Mail describes as such: “the length and width of someone’s face is measured and then the results are divided…the closer the ratios of a face or body are to the number 1.618 (Phi), the more beautiful they become.”

The outlet claims the concept was used by Leonardo Da Vinci to portray the ideal male body in his piece “The Vitruvian Man,” but mathematician Keith Deviln debunked this in 2007.

Filling out the top five were Superman actor Henry Cavill, Bradley Cooper, Brad Pitt and George Clooney. In other words, a who’s who of white dudes. There’s a little more diversity farther down the top ten, with Idris Elba at number eight and Kanye West at number nine, but the list is otherwise practically translucent.

It’s totally fine to find Robert Pattinson attractive (he’s swoon-worthy in The Lighthouse, we won’t front), but any claims of an individual being the “most” handsome or beautiful come with their own ethnocentric baggage. As corny as it may sound, beauty really is in the eye of the beholder.

If you want to make your weekend beautiful, here’s a list of things happening around town — no racist, pseudo-math necessary. — Daniel Valdez

Sarah McLachlan at McFarlin Memorial Auditorium
Remember that super depressing song that played during those inescapable ASPCA commercials that ? This folk-rock artist is the culprit. — Nikki Johnson-Bolden

Murder By Death at Deep Ellum Art Co
2020 will mark the 20-year anniversary of Indiana rock band Murder by Death’s existence, and this tour will be in celebration of that. Old enough to drink! Cheers. — GG

The Adicts at Gas Monkey Bar N’ Grill
Four years ago, The Adicts went on a co-headlining tour with Reverend Horton Heat, yet Dallas didn’t make the cut on one of its stops. Someone needs to answer for that. — GG

Dirty South at Granada Theater
Fair warning, this Grammy-nominated DJ is not, in fact, from the dirty south. — NJB

The Bitch Bible Live at The Bomb Factory
Self-described “PR nightmare” Jackie Schimmel is serving up a live edition of her podcast where she discusses, well, anything she wants. — NJB

Slander at South Side Ballroom
This Mad Decent- signed electronic duo is no stranger to the rave festivals a lá TomorrowWorld, EDC and ElectricZoo. But this time, it’s bringing “gud vibrations” on a headlining tour. — Mason Geear

Ja Rule at Gas Monkey Live!
Hey, it can’t be any worse than his very publicly co-signed Fyre Festival. — DV

Getter at Stereo Live Dallas
You might know this guy from threatening a baby in that “Aye, yo Xander get your boy dog,” video that floats social media. He’s also a DJ, apparently.  — NB

Staff Infection at Three Links
Barf Wave Records is about to infect Three Links with a truly ill two-day festival. Headlining night one is Sealion joined byLoafers and Lizzie Boredom. Night two features a triple threat of alt-rock cover bands: Deadbeat Club (The B-52’s), Androgynous (The Replacements) and The Darned TX (The Damned). The best part is, it’s all bands who work or have previously worked for the revered Deep Ellum venue. — DV

Xetas at Andy’s Bar
If you missed these Texas-based garage-punks at Three Links, Andy’s Bar has graciously given you one more chance. — DV

Jessica Simpson at AT&T Permorning Arts Center – Wyly Theatre
The early 2000s pop singer-turned-shoe-and-handbag designer couldn’t go on a book tour for her memoir “Open Book” without making a stop in her hometown of Dallas. — NJB

Stevie Tombstone at Sons of Hermann Hall
Tombstone is an ’80s folk artist similar to that of Johnny Cash known for keeping love for the genre alive by performing over 200 shows a year. Jacob Furr and Katie Robertson open. — NJB

Mutha-Falcon at Rubber Gloves
This Denton punk band is playing a show to celebrate the release of a new mutha-fucking single. — NJB

Charlie Wilson at Winstar
Depending on your age, you’ll either recognize this soul icon as the powerhouse voice behind The Gap Band or that cool, older dude who shows up on Kanye and Tyler, the Creator albums. — DV

Dying in Designer at Ruins
15 years ago, it would have been difficult to imagine an emo rapper sharing a label with Sum 41 and Taking Back Sunday, but adolescent alienation transcends genre boundaries. — DV

Allen Stone at Granada Theater
This Washington singer-songwriter released a brand new album titled Building Balance toward the end of last year. If you have an affinity for Leon Bridges’ Motown revival sound, you may want to check this out. — GG

Periphery at House of Blues
This Washington, D.C. progressive metal outfit released its sixth full-length titled Periphery IV: Hail Satan last April and did a run with Dance Gavin Dance in support of it. This time around, the quintet is claiming top billing, with Plini and Covet opening. — GG

The New Pornographers at Canton Hall
Fun fact: There was a televangelist named Jimmy Swaggart that called rock music “the new pornography,” and that’s where this Canadian indie-rock band gets its name from. Swaggart got wrapped up in two prostitution scandals during the Reagan-Bush years, so given his affinity for sex work, maybe he meant that as a compliment. — GG

Miranda Lambert at American Airlines Center
2003 was a weird time. The U.S. invaded Iraq, the Wachowski sisters released two Matrix movies (only one of which was good), and among a wave of singing competition reality shows that sprouted following American Idol’s success stood one show on USA — Nashville Star. Lindale, Texas resident Miranda Lambert competed on the show’s first season, only to score third place. Sure, she may have gone on to win Grammys, sell multi-platinum records and take up considerable real estate on Billboard charts, but the judges decided to go with Buddy Jewell instead, with full confidence that their decision would age well. — GG

High & Mighty Podcast Live at Sons of Hermann Hall
Jon Gabrus hosts this podcast about “stupid stuff that a nerd/meathead/manchild would be into.” So, um, there’s that. — NJB

Camila at The Bomb Factory
No, this is not the former Fifth Harmony member who is dating Shawn Mendes. This duo from Mexico City is a three-time Latin Grammy Award winner that has wowed audiences in Latin America for years. – NJB

Vader at Gas Monkey Bar N’ Grill
Not the Vader of “I’m Your Father” fame, rather a Polish heavy metal band that doesn’t even need the power of the force to blow your mind. — Mason Geear

Black Flag at Rubber Gloves
Greg Ginn only reunited the current incarnation of Black Flag as a middle finger to Keith Morris. If you want to see the spite project of a 64-year-old stoner that lives in Taylor, Texas, look no further. If you’re looking to rekindle Black Flag’s glory days, well, just stay home and listen to My War. — GG

Mýa at Trees
Mýa has been an R&B staple since the late ’90s, but you might remember her from one-fourth of the early 2000s rendition of “Lady Maramalade,” or a the runner-up on Dancing with the Stars in 2009. Or maybe you just know her for being underrated, because she is. — MG

Staff Infection at Three Links
Barf Wave Records is about to infect Three Links with a truly ill two-day festival. Headlining night one is Sealion joined byLoafers and Lizzie Boredom. Night two features a triple threat of alt-rock cover bands: Deadbeat Club (The B-52’s), Androgynous (The Replacements) and The Darned TX (The Damned). The best part is, it’s all bands who work or have previously worked for the revered Deep Ellum venue. — DV

Say My Name at Lizard Lounge
Not only is he a mega DJ, he’s also a Chapman University Grad with a degree in PR and Advertising. It all seems to have paid off, too — the guy has received co-signs from the likes of Skrillex and The Chainsmokers. –NB

Army of Darkness 35mm Screening at Texas Theatre
Hail to the king of ’90s horror-comedies, then stick around for a charity raffle benefitting Dallas Pets Alive. — DV

Bastards of Soul at The Kessler
These inglorious bastards are up for five nominations at this year’s Central Track Music Honors. And to make things sweeter, the band’s record-release show at the Kessler is sold-out, so it seems like the hype is only spreading. — DV

Lane 8 at Stereo Live
Groovy, glimmering deep house ideal for both headphone-listening and booming club speakers. Just don’t bring your phone onto the dance floor — the event description promotes the show as a “photo-free space.” — DV

Ana Gabriel at Toyota Music Factory
This Latin-pop and Mariachi staple has been in the game for almost 50 years and is one of the biggest superstars in Mexico. But, if you’re not attuned to that scene, Omar Rodriguez-Lopez of At the Drive-In and Mars Volta has been playing in her backing band lately. — GG

Elle Varner at House of Blues
This Brooklyn native is offering up a “Refill” for fans who need a serving of silky R&B vocals. —NJB

Sadfacethuggin at Trees
The Dallas emo rapper, whose praises we’ve sung in times past, will be closing out a short Texas leg with a rather last-minute hometown show. — GG

Acid Carousel at Rubber Gloves
This band of twenty-somethings that passes out snacks at shows has a catalogue of trippy songs that evoke the psychedelic sounds of the ’70s. — NJB

Escape the Fate at Club Dada
It seems to be fate that these guys always come back to Dallas. The emo act has been around since 2004 and has gone through its fair share of lineups within the group. Clearly the chaos has worked out, they’re still rocking out venues. —Natalie Bermudez

Once Upon A Movie Award Watching Party at Texas Theatre
An Oscars watch party wouldn’t be complete without a red carpet and a winners poll ballot. — MG

Dallas Renegades Season Opener
For some reason, Vince McMahon has resurrected his once-defunct XFL football leauge, and Dallas is one of eight cities to house a team in its retrial. For the XFL’s opening weeekend, the Renegades will take on the St. Louis Battlehawks. — Alec Spicer