Three Links Is Keeping It In The Family For Staff Infection.

The Deep Ellum Punk Rock Venue Is Hosting Its First-Ever Two-Day Festival Showcasing The Talent That Keeps It All Together.

Being in a band isn’t listed among the job requirements for working at Three Links in Deep Ellum — but maybe it should be.

People who stop into the revered punk rock venue this weekend will see why, too, as the spot, along with Barf Wave Records, hosts a two-day festival called Staff Infection that’s meant to showcase the many musical talents of its staff. This Friday and Saturday night, Three Links’ stage will be graced by a litany of interesting performers — among them the B-52s tribute Deadbeat Club, stalwart area punk bands Lizzie Boredom and Sealion and its Tuesday night rap-funk residents CoLab — all of which boast at least one member who holds down a gig in the venue when they’re not playing music.

The idea to put on a show strictly featuring acts affiliated with the venue has been tossed around the Three Links walls for a while, says festival organizer Adam Locklear, a barback at Three Links and the drummer for local punk favorites Loafers.

“So many of us are musicians in good bands that work here,” Locklear says. “The buzz started going, and we would talk about it [after closing time] a lot, so as soon as we started hashing out the details of it, I think that’s when it became more real.”

Conversations first spurred when Locklear, Aisha White (a Three Links bouncer who raps under moniker Tree) and The Gorehounds frontman Howard Kelley (who used to bartend at the venue) half-heartedly mentioned the idea to Three Links owner Scott Beggs a couple years back. All it took was one far-advanced open date to fall in front of Beggs’ booking calendar to spark what Locklear describes as a pretty easy organization process.

“[Beggs] was sitting at a computer one day and was looking at the dates,” Locklear says. “He sent me a text saying, ‘Are you going to do this or not?’ So, we set some dates and I just started doing it.”

Beggs himself has a storied background in the Dallas music scene, having booked shows in rooms such as the Gypsy Tea Room and Trees before opening Three Links seven years ago. When the opportunity arose to book his own stage with his own staff, he says the decision to give it the green light was a no-brainer.

“There was a time, back as I was growing up, that bars and venues weren’t always the most welcoming places,” Beggs says. “So I’ve tried to, when possible, build our staff around musicians who understand the way they want to be treated — and the way they want to treat other people. We just have good people here, who also happen to be super talented.”

In fact, Locklear says the Three Links staff is so stacked with musicians that he couldn’t even book every coworker of his to the event if he wanted to.

“There’s a lot of them,” Locklear says. “And, honestly, there were a couple really good bands that got left out — because there were so many.”

Next year, perhaps? The Three Links team says its already eyeing the possibility of spreading the contagion to an annual event of sorts. In fact, heading into this weekend’s festivities, Beggs says he’s optimistic about future similar showcases taking place again down the line.

“I’m really proud of our staff, and I like to showcase them,” he says. “I’m proud of how they represent us to the community and to the people coming through.”

Single-day tickets for Staff Infection run between $10-$15, but you can score a two-day pass for $20 here. 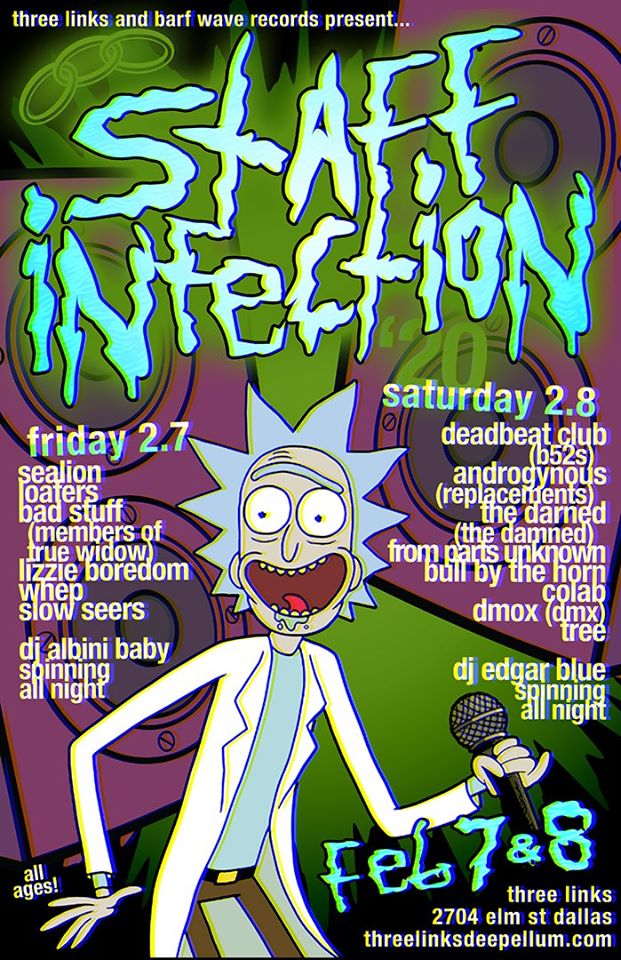