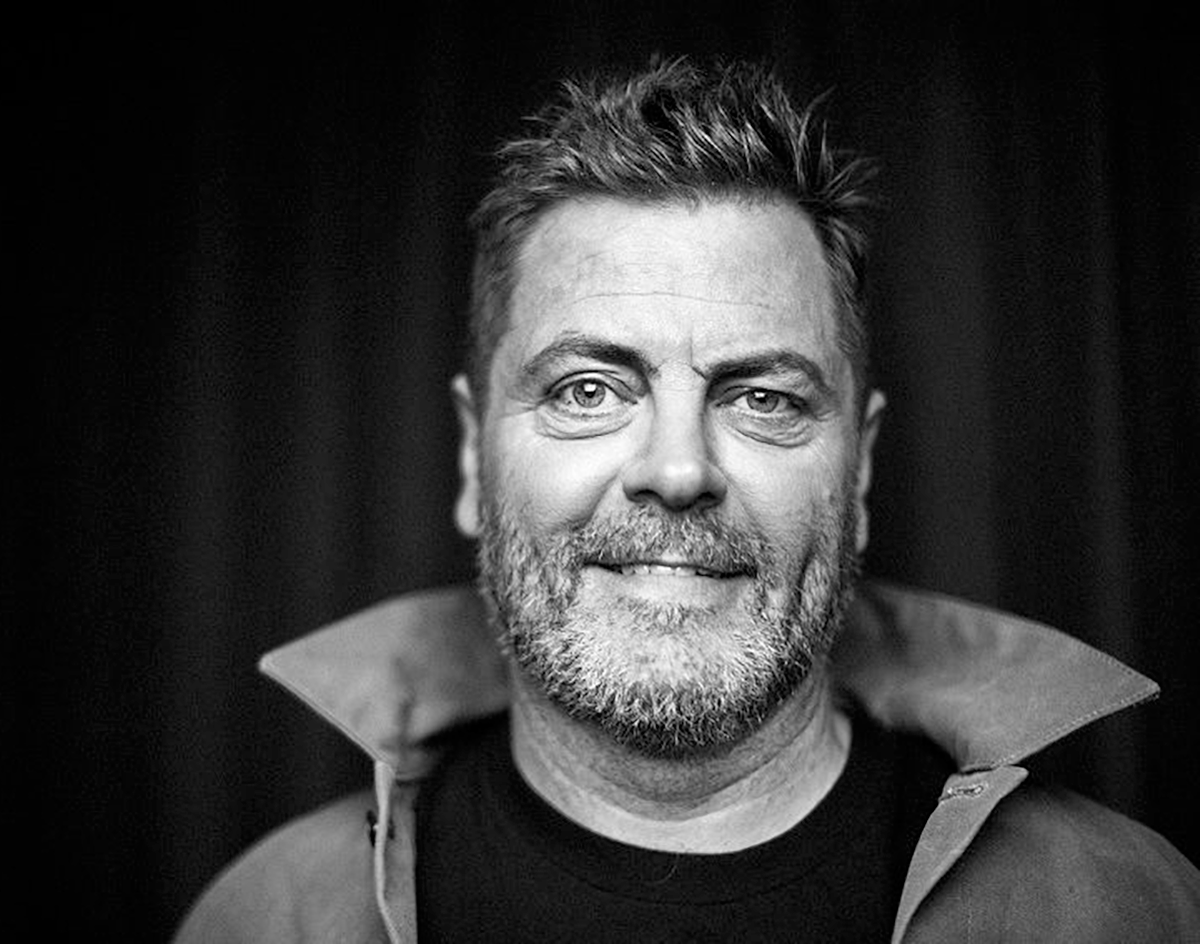 Rise Up With Nick Offerman, Catch The Highly Anticipated Jawbox Reunion And Fire Up The Grill For Curren$y At Bric’s Smoke Out. Plus more!

If you have used literally any of the social media platforms this week, you have probably been unable to escape the talk of FaceApp, which gives you an exaggerated peek at what you will look like when you are elderly.

It has not just been for us common folk, either. Celebrities such as Cardi B to Kevin Hart to The Jonas Brothers have gifted us pretty grizzly previews of a future where botox apparently does not exist.

Some, like Drake, ended up looking a little too distinguished. So much so,  you wonder if they took a little liberty with photoshop instead of using the actual app — which may have been a smart move. As it turns out, the app is run by the Russian based company Wireless Lab, because why wouldn’t it be.

The concern of private information being hacked is so high that Senator Chuck Schumer (D-N.Y.) has asked the FBI and the Federal Trade Commission to look into the company, while the Democractic National Committee has asked all of the potential Democratic nominees for President to remove the app from their phone. Yikes.

You know what’s just as fun, but free from Mother Russia and Vladimir Putin? This list of things to do in town this weekend. — Travis McMillan

Shane Smith at Lava Cantina
Shane Smith & The Saints is a five-piece band from Austin that hipsters, rednecks and bikers can all get into. Music really brings people together, huh? — Stephanie Salas-Vega

Jawbox at Trees
Having been reformed just this year, Jawbox is on a limited tour and Dallas was lucky enough to get a stop. — TM

Cowboy Mouth at Gas Monkey Bar N’ Grill
Despite the name, Cowboy Mouth, this band does not perform country music instead they perform a New Orleans fueled mix of rock, punk and blues. — TM

Domi and JD Beck at The Common Table
JD Beck is a 16 year-old Dallas native and drummer touring with French piano artist Domi, as they perform around the U.S. and France. — TM

Mo Pitney at Billy Bob’s Texas
Mo Pitney is known for his genuine and personal take on country music in the vein of George Strait and other Grand Ole Opry legends. — TM

Vallejo at Texas Theatre
This isn’t the Bay Area of Vallejo, California displaced by recent earthquakes, it is a band from just down the road in Austin. — TM

Two Tons of Steel at Dan’s Silverleaf
This San Antonio-based band is a fan favorite of the storied Gruene Hall and has also performed at the Grand Ole Opry. — TM

Celeste Barber at House of Blues
Celeste Barber is a comedian who came to fame, in part, for parodying of celebrities photos on instagram. — TM

Will Clarke at Lizard Lounge
Last year this DJ’s remix of U2’s “Love is Stronger Than Anything in its Way” hit No.1 on Billboard Dance chart, making it U2’s first No.1 in 17 years. Outside of the music world, Clarke is a streetware brand designer and the host of his monthly radio show, The Barbershop, on Sirius XM. — SSV

The American Fuse at Three Links
This band formed in Dallas in the ’90s but their vibes really says ’70s NYC punk. The self-proclaimed monster-hunters of Mississippi, The Deadtites, will open. — SSV

Luna Luna EP Release at Deep Ellum Art Co.
Luna Luna made away with a ton of awards at our Central Track Music Honors earlier this year, so we’ll let that speak for itself — Alec Spicer

98 Degrees at Winstar Casino
I wasn’t wondering what this group was up to these days, but um, I guess this is the answer anyway. — AS

Nick Jordan at Killer Tacos (Denton)
Nick Jordan claims to be a hip-hop artist from Los Angeles, but animations of him on his website imply that he may be half alien. — TM

That could be you. Just saying. — AS

Nick Offerman at WinStar Casino
The woodwork enthusiast and famed comedian most notable for playing Ron Swanson on Parks and Recreation returns to WinStar, likely to show off both of his talents. Offerman, by the way, is a fan of Brooklyn-via-Denton accordionist Corn Mo and has brought him on tour in the U.S. and Australia. That probably will not happen this time around, but one can dream. — Garret Gravley

Yes at The Pavilion at Toyota Music Factory
The outfit currently masquerading as Yes is playing Toyota Music Factory. Steve Howe and Alan White are the only current members who were around during the band’s golden years, but as it stands, the legendary English prog band currently has no original members. On the bright side, Arthur Brown is also on this tour, and he never comes through Dallas. — GG

Curren$y at Canton Hall
Young Money signee Curren$y last played Dallas at House of Blues with Wiz Khalifa. Now he’s playing “Bric’s Smokeout” with the likes of Larry Jone, The Outfit TX, Yak the Mack, Money Mal, Tsa Mel and Azchike. As far as we know, there isn’t any official confirmation on whether there’s a cookout, but it would be cruel to tease us with that possibility and not deliver. — GG

Part Time + Gary Wilson at Deep Ellum Art Co.
The former is the solo project of Ariel Pink collaborator David Loca, and the latter is an experimental music dinosaur who has made records with R. Stevie Moore and a fan out of Earl Sweatshirt. — GG

John Vanderslice at Andy’s Bar (Denton)
Between Eyehategod and Xiu Xiu, Andy’s has been bringing in some more high-profile shows as of late — and they continue down that trajectory in bringing John Congleton-associated folk musician John Vanderslice. To make this offering even more enticing, the seemingly dormant Baptist Generals open. — GG

Chris Young at Dos Equis Pavillion
Like many great musicians, Chris Young got his start after winning “Nashville Star,” a singing competition on USA Network, in 2006. — SSV

The Alarm at Gas Monkey Bar N’ Grill
The Alarm, Modern English and Jay Aston’s Gene Loves Jezebel all in one house. It’s like a trip back in time to the ’80s. New-wave fans better pull up to this. — SSV

Sharam at It’ll Do Club
Sharam is a techno DJ and member of The Deep Dish, which has been a dance music innovator for over two decades. Aside from running the Yoshitoshi record label, Sharam also features weekly mixes from himself and his label’s artists on his radio show. — SSV

The Cush at The Foundry
This psych-rock husband band is led by a husband and wife duo, and is making its rounds as it prepares for the release of its upcoming fifth album. — TM

Spectrum at Dallas Live!
The event is described as an “immersive color and light experience.” I don’t know what that means, but I would bet 3-D glasses would not be out of place. — TM

I, Pariah at Ridglea Theatre (Fort Worth)
I, Pariah and the Exiled Martyr will both be performing, which is fitting, because both appear to be dedicated outcasts and not that quiet about declaring it. — TM

Aaron Watson at Texas Live!
Texas native Aaron Watson just released his 15th album, Red Bandana, and is hitting the road for what we guess is at least the 15th time.  — TM

Flaw at Trees
This Louisville, Kentucky-based metal band isn’t shy about its flaws, in fact it will scream them proudly. –TM

Boys of Summer Tour at Trees
Teenagers who are famous for being on social media are on a tour. How did we get here? — AS

KoRn and Alice in Chains at Dos Equis Pavilion
Former Ozzfest favorites and the best band to slam a Monster Energy to, Korn, have announced a co-headline tour with Alice in Chains 2.0. Underoath and Ho99o9 open. — GG

Built to Spill Sunday at Granada Theater
The revered Idaho-based indie rockers return to their regular Dallas stomping grounds at Granada this summer in celebration of the 20-year anniversary of the band’s wonderful fourth full-length, Keep It Like a Secret. — GG

Bruce Robison and Kelly Willis at Dan’s Silverleaf (Denton)
This husband and wife duo from Austin have a new album coming out called Beautiful Lie featuring the song “Astrodome.” It bangs. — TM

The Church 25th Anniversary at Lizard Lounge
Channel your inner Wednesday Addams and join every goth in Dallas as they perform a ritual sacrifice of their mothers leftover mascara to celebrate the 25th anniversary of The Church. — TM

Twin Tribes at The Nines
Twin Tribes describes its lyrics as being about “The undead and parallel universes.” So… Yeah… — TM