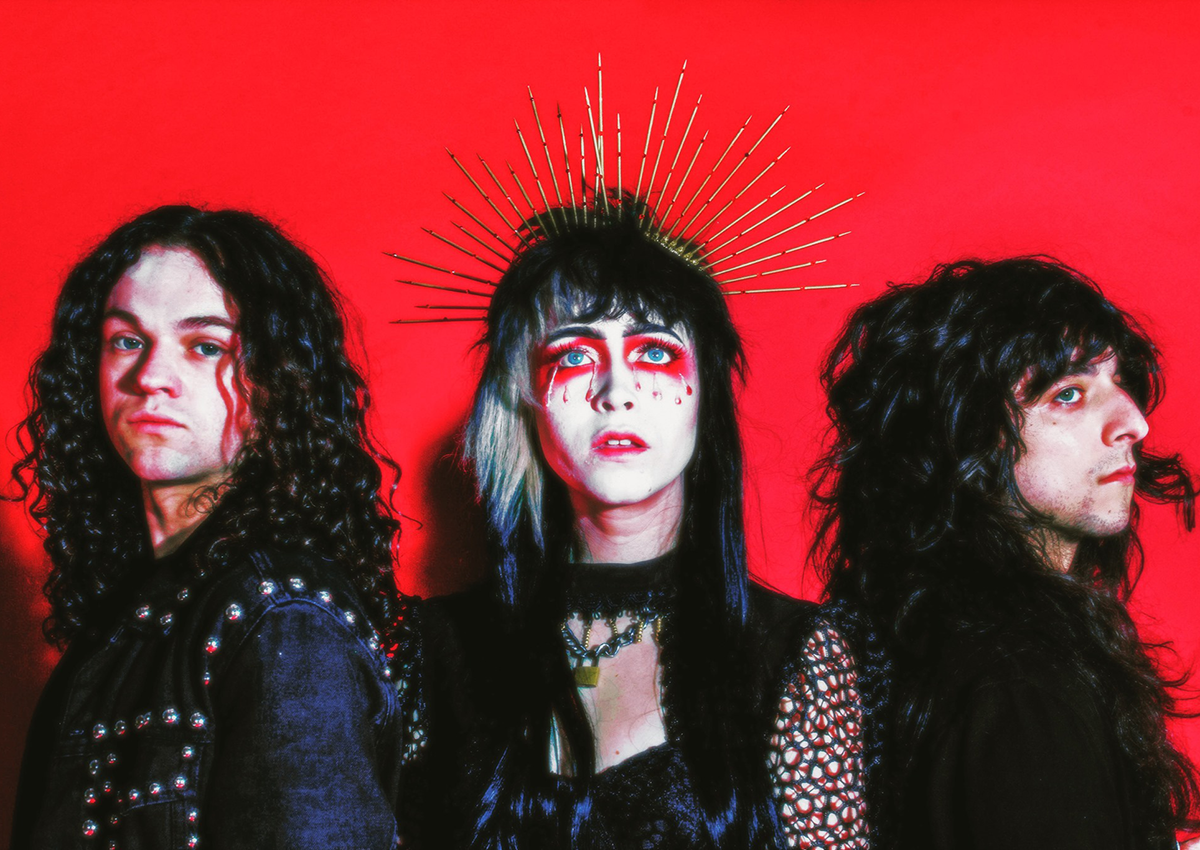 Be A Martyr For Rosegarden Funeral Party, Stay Useless With Cloud Nothings And Keep It Pure Country With George Strait. Plus More!

Good news, fans of vastly overrated fast food: Chick-Fil-A might be less homophobic now! Emphasis placed heavily on “might be.” It all depends on how much credit you give the company for its announcements this week.

In a press release, Chick-Fil-A announced that it would be winnowing down the number of charities it donates to in order to “provide additional clarity and impact with the causes it supports.” Among the organizations it’s ceasing donations to include The Salvation Army and Fellowship of Christian Athletes, both of which have come under fire for their respective histories of anti-LGBT policies.

The corporation’s 2018 tax returns revealed it donated $825,000 to the Fellowship of Christian Athletes, which forbids its employees from engaging in “homosexual acts.”

Chick-Fil-A defended the decision by claiming that this criticism “mischaracterizes the mission of the foundation”, essentially arguing, “hey, these organizations we donate to do good things too, who cares if their internal policies are messed up?”

That said, it’s pretty suspicious timing that this announcement comes just one month after the fast food chain’s first U.K. location closed down due to public outcry after just eight days in business.

From the outside, it’s difficult to tell whether this move is based on purely financial motives or a genuine change of heart. Either way, you have plenty of better options to spend your time doing in DFW this weekend that don’t include eating morally dubious chicken. — Daniel Valdez

Incubus at Toyota Music Factory
Did you know that Incubus and System of a Down played a show together at the Galaxy Club (what is now the Point Skate Shop, as we pointed out in a previous piece) in 1998? A lot has happened since then! The California rock band played Ozzfest, dominated the rock charts in the early ’00s, enjoyed a resurgence in 2006 with Light Grenades and went on hiatus two years later, only to return to the spotlight in 2010. In recent years, the band has been touring with other Generation Y dinosaurs such as Deftones and Jimmy Eat World, but appear to be flying solo this time around. — Garrett Gravley

The Pharcyde at South Side Ballroom
Jack Daniel’s is putting together free events titled “Jack Daniel’s Art, Beats & Lyrics” (or ABL for short), and legendary west coast hip-hop duo The Pharcyde have been tapped as headliners for the Dallas affair. Jay*Clipp, Wally Sparks and Jeremy Avalon open. – GG

Drowning Pool at Trees
Let the bodies hit the floor, and while you’re at it, donate some toys to kids in need, since this gig is a Toys for Tots benefit. — DV

Kaitlyn Bristowe at House of Blues
Being on The Bachelor can be a pretty sweet gig, if you know how to keep it spinning. Bristowe was a contestant one season, then starred in The Bachelorette, and now she’s a podcaster and “influencer.” You have to respect the hustle. — DV

Hayes Carll at Granada Theater
Carll is a native Texan and Americana artist with a sense of humor — his 2011 album titled KMAG YOYO stands for “Kiss My Ass Guys, You’re On Your Own.” — DV

Grum at Lizard Lounge
Grum makes progressive house that sounds like it should serve as a soundtrack to some sort of neon-lit racing game. You could even call it Gran Turismo-core. — DV

Rufus Wainwright at Majestic Theatre
The baroque-pop queer icon has spent most of this decade focused on his extracurriculars, like composing operas and adaptations of Shakespeare sonnets, but he’s finally readying a new pop record and touring to boot. — DV

Morbid Angel at Gas Monkey Bar N’ Grill
One of the most influential death metal bands of the 1990s, and one of Beavis & Butthead’s favorites, as well. — DV

George Strait at Dickies Arena
Remember when he played his “final” concert at AT&T Stadium five years ago? This is one cowboy who refuses to ride off into the sunset. — DV

Blade Runner Bash at Panoptikon
The original Blade Runner movie takes place in November 2019, and we have to say, that film’s vision of sci-fi dystopia looks a lot cooler than the one we’re currently living in. In honor of this timing, Panoptikon is throwing a cyberpunk themed party featuring new-wave DJs and go-go dancers. — DV

Once at AT&T Performing Arts Center
“Falling Slowly” is one of the few Academy Award-winning songs that isn’t utter schlock, so it’s no wonder that the movie it came from got a musical adaptation. — DV

Cursive, Cloud Nothings & Appleseed Cast at Trees
There’s a loyalty card that gets punched every time a co-headline bill gets announced, and legend has it that if you stamp it enough, you can redeem it for a free car wash. — GG

Buildings at Club Dada
On the doomy noise-rock crew’s new record, one of its songs commands the listener to “Piss Up a Flagpole. At least buy us dinner first. — DV

INTXS at House of Blues
Even in the genre-blending 1980s, you never would have seen INXS, Huey Lewis & the News and Cyndi Lauper share a stage, but that’s the power of tribute bands. — DV

Cattle Decapitation at Gas Monkey Bar N’ Grill
The ecologically-minded death metal group is dropping its newest album on Black Friday, which should make for an appropriately grim soundtrack for retail workers. — DV

Blood Cultures at Ruins
This Brooklyn-based band keeps its members’ individual identities anonymous to all (even its publicist), but its noisy electro-pop isn’t as faceless. — DV

Lewis Black at Majestic Theatre
One of The Daily Show‘s most prolific correspondents is, according to the name of his show, “Alive in Concert.” There wasn’t any doubt he would be alive, but we guess we’re glad that’s fully clarified! — DV

Japanese Fall Festival at Fort Worth Botanical Gardens
Celebrate the Year of the Pig at this two-day festival presented by the Fort Worth Japanese Society. On deck for Saturday and Sunday are food trucks, traditional dance/karate performances and local craft vendors. — DV

BrainDead Brewing Metalfest at BrainDead Brewing
As you might have guessed from the title, it’s a festival with a shit-ton of metal acts performing. Particularly notable acts on the lineup are local heroes Pinkish Black and Philly’s Zorn, who perform death metal with tongue fully impaled through cheek. — DV

Pigface at Granada Theater
The industrial veterans and Trent Reznor buddies are headed out on tour for the first time since 2005. — DV

Zhavia at House of Blues
If you saw the recent “Aladdin” remake (it made $1 billion world-wide so surely some of you have), you heard this singer belt “A Whole New World” with Zayn Malik during the end credits. No Zayn at this show, but she’ll be performing her own R&B tunes. — DV

Ottmar Liebert & Luna Negra at House of Blues
New-age and flamenco fuse together for what’s sure to be a zen experience, which makes sense, given Liebert is also an ordained monk. — DV

Angélica Rahe at Deep Ellum Art Co.
Rahe served as Kali Uchis’ musical director on her 2018 tour, so it’s no surprise that she makes similarly chill alternative R&B. Supporting her on the bill is Deep Ellum hip-hop group Cure for Paranoia. — DV

Ashmore at Gas Monkey Bar N’ Grill
Your stoner uncle’s favorite bands, from Pink Floyd to the Doors, will be covered in this free gig by tribute group Ashmore. — DV