31 Things To Do In Dallas This Weekend: November 29 – December 1 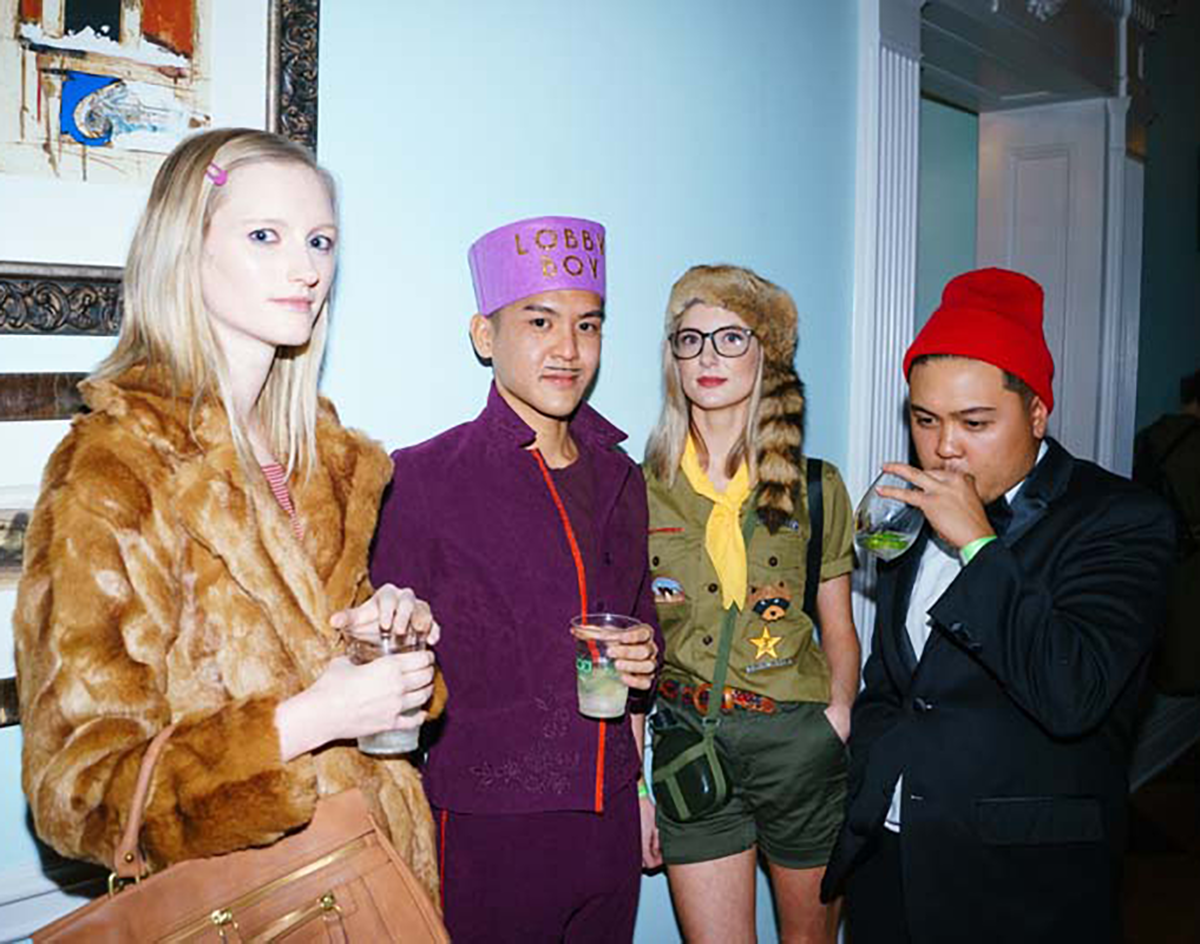 Get Your Wes Anderson On at Disco TX’s Explorer Club Gala, Love ‘Em All With K. Michelle And Let The Texas Gentlemen Get You Shakin’ All Over. Plus More!

Speaking of Black Friday, it’s expected to be even more of a hot mess than usual this year, if you can believe it.

According to the National Retail Foundation, 165 million people are expected to shop between Thanksgiving Day and Cyber Monday this year.

DFW shoppers make up a particularly lucrative portion of that population: according to a Deloitte survey in 2017, local shoppers planned to spend an average of $1,699 during the holiday season, well above the national average of $1,228. Can’t say we relate!

Considering the scrutiny companies like Amazon have faced for placing holiday-rush efficiency over the health of their employees, participating in large-scale corporate Black Friday and Cyber Monday events doesn’t feel very ethically justifiable. Then again, “No Ethical Consumption Under Capitalism!” doesn’t sound as snappy in an Old Navy ad.

Fortunately, there’s plenty of other options to spend your time doing around Dallas this weekend that don’t include feeding the mass-consumerist monster. — Daniel Valdez

Domo Wilson at House of Blues
You may have come across her Instagram page or heard her song “Bisexual Anthem” a time or two. If you haven’t, you will. — Garrett Gravley

Back in Black at Gas Monkey Bar N’ Grill
Nearly all of AC/DC’s ’80s heyday lineup has either passed away or retired from touring, so a tribute band like Back in Black is your best bet to see AC/DC in their former glory. — DV

Taron Lockett at Three Links
Any funk artist is only as good as their drummer, and Taron Lockett has drummed for some of the greats, from Dallas’ own Erykah Badu to Prince. — DV

Black Taffy at Ruins
One of Dallas’ trippiest beat makers is headlining at Ruins. Don’t write him off as “Chill Lo-Fi Beats to Study To” — his album, Elder Mantis, is one of the most re-listenable electronic records DFW has seen in some time. — DV

Disco, TX: Explorer’s Club Gala at Midnight Rambler
The latest of Disco, TX’s pop-culture themed parties is devoted to twee icon Wes Anderson. Attendees are encouraged to dress up as one of their favorite characters from Anderson’s movies, so why not try a costume inspired by 1996’s Bottle Rocket, which he filmed here in Dallas? — DV

Anime Dallas at Hyatt Regency
Dallas is a major hub of U.S. anime fandom, in no small part due to Funimation in Flower Mound, and this second-year convention aims to cement that reputation. This weekend-long celebration will feature cosplay contests, vendors of nerdy goods and guest appearances from popular voice actors. — DV

Chus & Ceballos at It’ll Do Club
Even though It’ll Do is under a new team, the aim is to retain the dance club’s cred. Inviting this long-running Spanish techno duo certainly seems like a good step in that direction. — DV

K?D at Stereo Live
Some of the artists this young EDM producer has dropped remixes for include Porter Robinson and The Chainsmokers, which should clue you into his melodic sensibility. — DV

Cowboy Mouth at Six Springs Tavern
The name “Cowboy Mouth” comes from a play by Sam Shepard and Patti Smith, referring to “one with a loud and raucous voice.” That description certainly applies to this rowdy jam-band, as well. — DV

K. Michelle at House of Blues
Her hip-hop-infused R&B has made some dents in the Billboard charts, but K. Michelle is arguably just as popular for her starring role in VH1’s Love & Hip Hop series. — DV

Snails at South Side Ballroom
The award for “Most Disgusting Genre Name” goes to…”Vomitstep,” which is the brand of visceral dubstep that this producer regurgitates. Better luck next time, “shitgaze.” — DV

(Hed) P.E. at Trees
The rap-rock crew is taking a break from their schedule as 9/11 Truther clowns to grace Trees. — DV

The Texas Gentlemen at Gas Monkey Bar N’ Grill
A regular Thanksgiving watch for classic-rock fiends is The Last Waltz, Martin Scorsese’s rock doc about the roots-rock legends, The Band. If you’re looking for modern music in a similar vein, The Texas Gentlemen are worth a listen. — DV

The Band of Heathens at The Kessler
One of Austin’s most popular Americana acts is bringing its folksy heathenry to Dallas. — DV

Dallas Ambient Music Nights XXXVI at Texas Theatre
If you haven’t been to one of these celebrations of audio-visual psychedelia, brace yourself for a tantalizingly trippy time. — DV

Helium Queens at Sweet Tooth Hotel
This “seers of the future and electronica power trio” is invading Sweet Tooth for a cosmic rave experience. — DV

aMuse: Black to Techno
This high-concept warehouse party is dedicated to the icy, intense sounds of tech house. — DV

Swimming While Drowning at Latino Cultural Center
The LCC is hosting the Dallas premiere of this queer coming-of-age play by Latino playwrights Emilio Rodriguez and Jorge B. Merced. — DV

Oregon Trail Party at Mac’s Southside
A party inspired by the classic edutainment computer game “The Oregon Trail,” for those with fond memories of digitally dying of dysentery. If your team is able to traverse the physical and mental challenges inspired by the game, you’ll win the Golden Wagon Wheel Trophy. Onward ho! — DV

Benny Benassi at Stereo Live
Here’s a weird fact about this EDM DJ: his remix of Public Enemy’s “Bring the Noise” won a Grammy in 2009, resulting in the only ever Grammy win for PE. Better late than never! — DV

Moving Panoramas at Double Wide
If you didn’t catch this Austin post-punk act at SXSW earlier this year, now’s the perfect opportunity to get acquainted. The band’s “Baby Blues” track sounds like the gauzy, hooky rock Dum Dum Girls used to make. — DV

Thank You Scientist at Three Links
If you have equal room in your heart for King Crimson and The X-Files, you’re kindred spirits with this progressive metal band. — DV

Light Up Lowest Greenville
Thanksgiving’s over, which means we can finally get festive without being annoying about it! The 3rd Annual Light Up Lowest Greenville event will feature all sorts of holiday lights brightening up the neighborhood and drink specials from plenty of local bars, along with a Reverse Food Truck accepting canned good donations. — DV

Punk Rock Brunch at Three Links
$15 gets you brunch, free coffee from Bag of Coffee Co. and sets from three local punk bands. Brunch has never been such a bargain. — DV

Freddie Gibbs at Trees
“Album of The Year” might sound braggadocios for a tour name, but if you released a hip-hop record as vividly and brilliantly produced as his latest collaboration with Madlib, you would be proud too. Cousin Stizz and Benny the Butcher open. — DV

A Peter White Christmas at Majestic Theatre
Sure, it’s not Miles Davis or anything, but Peter White’s smooth jazz stylings fit the holiday season well. — DV

Lorelei K at Rubber Gloves
We caught this Denton art-pop auteur at Dan’s Silverleaf last month and came away very impressed. Here’s an opportunity for you to see for yourself. — DV