Would You Rather: The Dallas Texans Or The Tampa Bay Buccaneers? 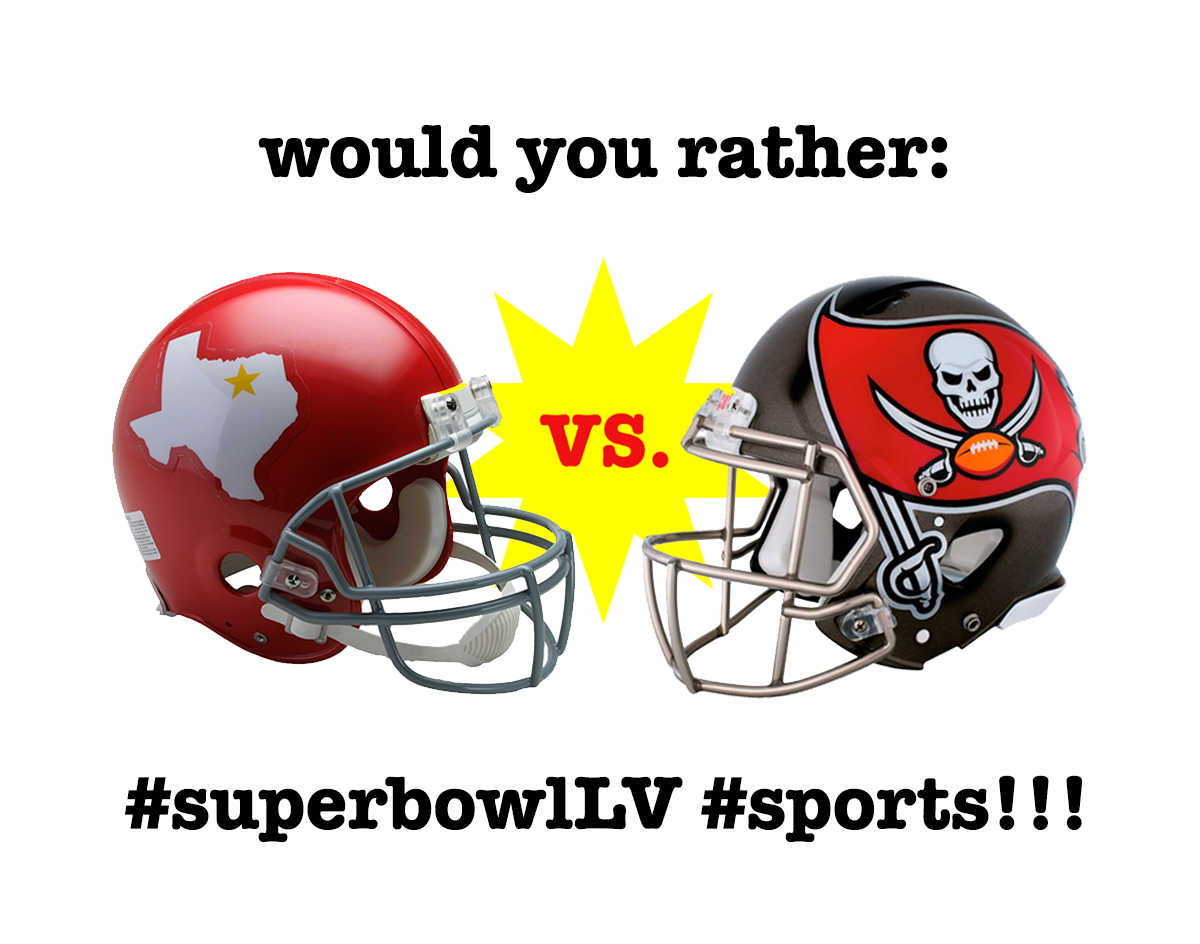 Super Bowl LV Is Happening This Sunday, And We Just Want To Know Which Team You Think Will End Up Earning The Win At This Year’s Big Game.

Well, the votes are in — and approximately 39 percent of Central Track readers would like to see the Irving-based entertainment company Chuck E. Cheese serve as Wall Street’s next short-squeeze effort. We really don’t know what’s funnier, the idea that Chuck E. Cheese is really just a children’s casino or that the company’s mascot has a full name and it’s Charles Entertainment Cheese.

Either way, you know us: We encourage hilarious chaos however we can get it.

That’s why this week’s “Would You Rather?” question is targeted at the most civilized people on the planet, sports fanatics!

If, for some reason you have lived under a rock or have just recently woken up from a traumatic head injury, this Sunday is Super Bowl LV. This year’s game will find the Tampa Bay Buccaneers facing off against the Dallas Texans, also known as Kansas City Chiefs.

Oh, what? Did we trigger you, Chiefs fans?

Make no mistake: Before moving to Kansas City, the Chiefs once were known as the Dallas Texans. You can thank Dallas magnate Lamar Hunt — the tenacious son of billionaire oil tycoon H.L. Hunt of the prominent Hunt family here in Dallas — for that. It’s a pretty wild story, actually, about how the Chiefs are still owned by a family based here in Dallas. In conversation with Texas Standard this week, Michael MacCambridge — a sports-based journalist in Austin and the author of Lamar Hunt: A Life in Sports — breaks the whole tale down pretty succinctly.

But here’s the gist: Lamar Hunt, whose father was once considered the richest man in the world, wanted to own a football team in the wake of the sport’s popularity in the 1950s. He tried many times to buy a franchise in the National Football League while calling for an expansion of the league, which at the time only had 12 teams and had deemed areas like Dallas “undesirable” as future franchise hubs. And that’s when Hunt did what he did best: In 1959, he founded his own league called the American Football League, and eh signed up his own team called the Dallas Texans as one of its charter members.

He was more successful than the imitators who’d follow him, and his effort forced the NFL to view expansion in a different light. In 1960, the league announced the expansions of new teams in Minnesota and here in Dallas, with the launch of a team called the Cowboys. A few years later in 1966, the AFL and NFL merged, and the Dallas Texans retained their color scheme while moving to Missouri, where they became the Kansas City Chiefs.

Hunt retained ownership of the Chiefs until his death in 2006, and his offspring still run the show. These days, the winners of the AFC Conference in the NFL each season are awarded the Lamar Hunt Trophy for their efforts.

After having won their former owners’ namesake trophy for the second year in a row this season, the Chiefs are now headed to the Super Bowl, where they’ll face off against Tampa Bay Buccaneers in their home field of Raymond James Stadium. And, oh yeah, apparently some guy named [squints] Tom Brady is supposed to be there, too? Never heard of him.

Anyway, all that being said, who are you rooting for this Super Bowl LV? The Dallas Texans or the Tampa Bay Buccaneers?