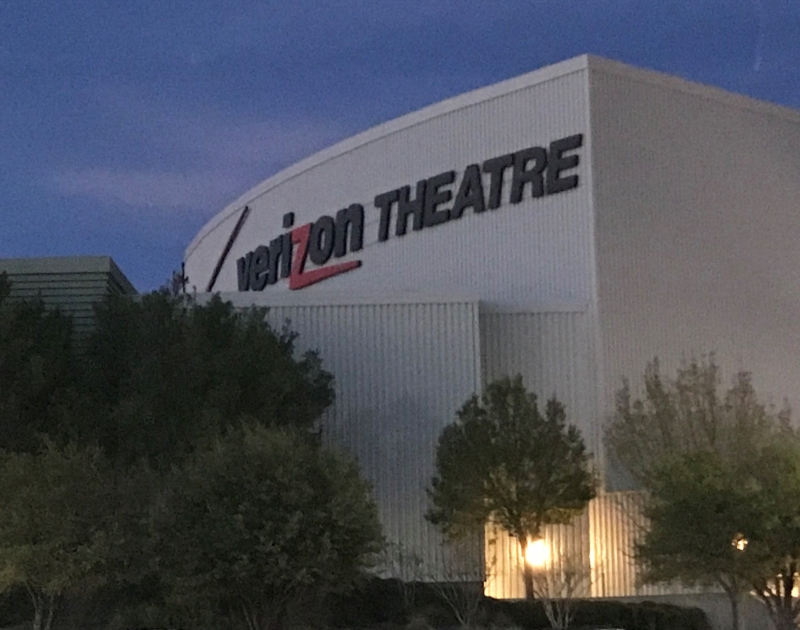 Grand Prairie’s Verizon Theatre Has A New Name (For Now), Claire Morales Gets Some Rolling Stone Love, Demi Lovato Is Recovering and So Much More!

It was called NextStage when it opened. It was called Nokia Live back when my high school held its graduation there in 2002. For the longest span of its run, though, it was called Verizon Theatre.

But now that name, too, is no more.

For the time being, the 6,000-cap Grand Prairie theater will simply be known as The Theatre at Grand Prairie.

Granted, it’s safe to assume that the removal of its old sponsors name simply means that they’re fielding calls for a new name sponsor, although, at this point, our attempts to get comment on the matter from AEG Live, which operates the venue, have been fruitless.

Still, if you’re a business owner and slapping your name on a venue in Grand Prairie sounds like it might fall within your budget… well, first of all, we’d like to speak to you about some exciting opportunities here at Central Track. But, after that, we’ve got an example from recent history to help give you a sense for how much sponsoring an area venue might set you back.

By all means, though, take your time perusing our advertising page first!

OK, so: When the 20,000-capacity space then-known as the Starplex Pavilion was looking for a sponsor last year it was reportedly seeking in the neighborhood of $800,000 annually for naming rights. Those, of course, eventually went to Dos Equis for an undisclosed sum.

For our next trick, we’re going back and giving an update on last week’s lead item surrounding the hospitalization of the Colleyvile-raised Demi Lovato last Tuesday after an apparent drug overdose. As CNN is reporting, she remains hospitalized due to complications including “nausea, vomiting and a high fever.” Though she’s expected to make a full recovery, there’s no timetable as to when she’ll be released from Cedars-Sinai Medical Center in Los Angeles. In that same story, CNN quotes a representative for the singer who says: “Some of the information being reported is incorrect, and [we] respectfully ask for privacy and not speculation as her health and recovery is the most important thing right now.” With that, we’ll refrain from offering up any more supposition on her condition, and instead send continued good vibes her way.

Someone else riding a wave of good vibes is Claire Morales, who appeared in this month’s edition of Rolling Stone’s 10 country artists you need to know this month column. In the write-up, the Denton indie-rocker drew comparisons to noted country greats Joni Mitchell, Kate Bush, PJ Harvey, Leonard Cohen and Courtney Barnett. Not sure we’d call her — or any of those other artists — country acts, though.

A musician with more country bonafides than Morales who also got an RS mention this week was Rhett Miller, who recently made his second appearance on Foo Fighters guitarist Chris Shiflett’s Walking the Floor podcast. This time around, he talked about the Old 97’s‘ upcoming Christmas album, a new solo album and his book of subversive children’s poetry. We’ve mentioned all three of these things in previous editions of this column, but ol’ Rhett does offer up a bit more detail on the Christmas album here: “It’s nine originals,” he says. “There’s a few co-writes. One of them is with Kevin Russell of Shinyribs, formerly with the Gourds… The title track for the album is ‘Love the Holidays,’ and that’s the co-write with Kevin Russell, and it’s the album-opener.”

On the subject of collabs: Mac Demarco brought Post Malone on stage at this weekend’s Fuji Rock Festival in Japan to play egg-shaker during a cover of Kyu Sakamoto’s “Sukiyaki.” Check out some bootleg video here.

Also playing that same festival was Kacey Musgraves, who managed to hit James Corden’s late-night show before crossing the ocean. Check out her appearance below and note the album-like precision with which she pulls of the title track of this year’s Golden Hour LP.

While those YouTube browsers are open, let’s go ahead and throw a bunch of other new clips your way.

First up is the young Charlie J. Memphis, whose debut single “Move Along” first appeared in our Songs of the Week column a couple weeks back. As noted then, this track was produced by Bowling For Soup frontman Jaret Reddick, with a full EP produced by John Pedigo due out in September.

Meanwhile, Josh T. Pearson ambled down to Mexico to film his cinematic “A Love Song (Set Me Straight)” video. As for me? I feel pretty dense for only just now realizing that every song on his The Straight Hits! LP has the word “straight” in the title.

Like Pearson’s video, Red Shahan’s “Waterbill” clip also features a man in a cowboy hat cruising in a Cadillac. There’s also a live shot from the Lubbock location of Blue Light, which only gets us more excited about the impending opening of Dallas’ offshoot.

Next up is Gineaux, who may or may not be going by Neaux ID these days. It’s the first video for a project the Dallas-by-way-of-Louisiana rapper has due out in the fall.

Also? While we posted a lyric video for Sad Cops’ “Numb Hand” a while back, the band’s now got a proper visual for it. The highlights include a stop-down to shotgun a can of La Croix. Also, peep that Dead Sullivan T-shirt worn by frontman Grayson Harris!

More curious is the fact that Tay-K is continuing to release new material from prison. For instance, we’ve posted below a new video that just dropped for a track that came out back in March. Notes Star-Telegram, he’s also currently being sued for signing a record deal from behind bars: “The principle behind this case is that people and corporations shouldn’t profit from violent crimes against the innocent,” says an attorney for the victim that the Arlington-sprung rapper is accused of helping to murder. “Taymor McIntyre became a threat to society, possibly with the encouragement of others, in order to promote sales of his music. I want those sales to compensate his victims, not to enrich a record company that supports a child thug.”

You know who we’d love to see get more money? Dallas’ reigning champs of low-budget clippage, Luna Luna, who are back with another great DIY clip for the awesome tune “Fro.” For reals, this band is really, really good:

On a similar note, Dead Vinyl uses a bunch of cardboard and other reclaimed garbage to make a pretty respectable little sci-fi short to go with its “Till The Cosmos Fall” single. One band’s trash is another band’s treasure, indeed.

Also, the re-formed [Daryl] is back with a new-old clip comprised of archived home video footage of the band during its initial run, set to the tune “Bottle Rocket.”

Finally, we’ll close this one out in the usual fashion — with some quick-hitting notes!

Verizon Theatre cover photo via. Got a tip for White Noise? Email us!