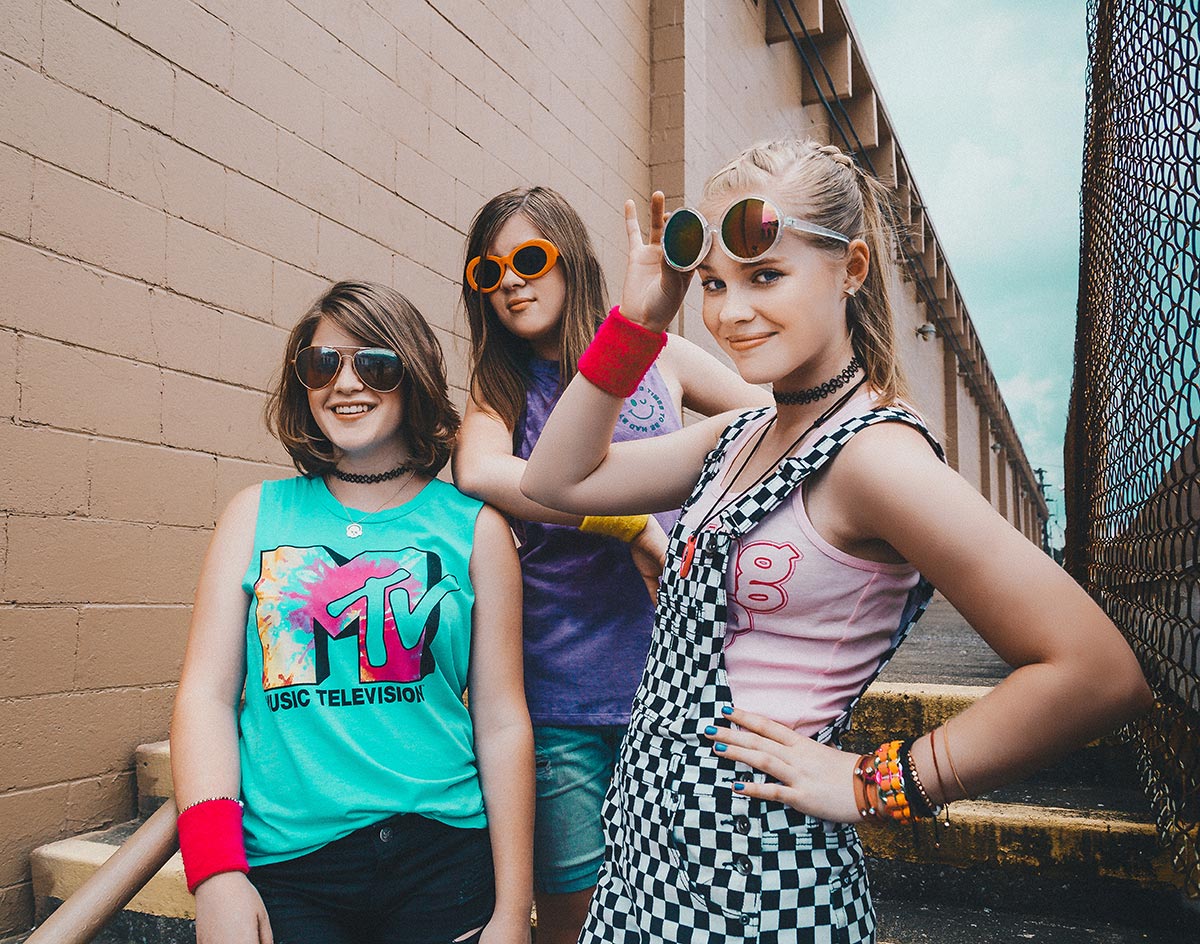 Not Ur Girlfrenz Return To The Pop-Punk Bigs, The Killers Are Blowing KAABOO Texas’ Load, Hellyeah (And The Clubhouse) Finds Life After Vinnie Paul & More.

They say millennials have killed many pastimes — like as dining at chain restaurants or dropping coin on diamonds (here’s a full list of other things millennials have supposedly killed!) — but one institution that everyone just assumed would stay evergreen only for it to die a violent death at the hands of millennials was the Vans Warped Tour.

Last year, you may recall, the famed touring pop-punk festival embarked on its final tour of our nation’s parking lots after 24 years of sun-soaked summertime scene fun.

Of course, this year, a zombie-fied version of the event is indeed still taking place — just not in the same way that it used two. On what would have been the festival’s 25th tour, Warped Tour is taking place over the course of three separate events — first as a sold-our, single-day June 8 event at the Rock & Roll Hall of Fame in Cleveland, then in two separate weekend-long deals in Atlantic City (June 29 and 30) and in Mountain View, California (July 20 and 21). Playing the former are the local pop-punk heroes and Warped Tour veterans in Bowling For Soup and, reprising their Warped appearance last year, Not Ur Girlfrenz, the up-and-coming teenage pop-punk outfit managed by Bowling For Soup vocalist Jaret Reddick. In California, they’ll join a lineup featuring Warped icons such as Blink-182, Taking Back Sunday, The Offspring and Good Charlotte, plus some left-field additions like Atmosphere, Cut Chemist and Quicksand.

One group that Not Ur Girlfrenz might do well to take some cues from is another once-young, family-indebted trio with local ties, the Jonas Brothers, whose February-announced recent reunion appears to be an unequivocal success. Last week, the once-Westlake-dwelling JoBros released a new single called “Sucker,” and paired it with a slick new music video that features the siblings romping around a castle with their significant others. Five days removed from its release, the clip has racked up more than 48 million views by the time of this writing.

Additionally, the song has already reached No. 1 spots on Apple Music, Spotify and iTunes in North America, and globally checked in at the top spots on Apple Music, YouTube and Twitter’s services. Its 20 million-plus streams on Spotify are also good enough to make it the No. 2 global single going right now, making the band’s publicity claim that the track is also the No. 1 “Greatest Gainer for Top 40” radio at the moment kind of a no-brainer.

Of course, beyond international fame, the Jonases have had some help pushing their new track to audiences: All week long, the band’s performed in residency as the in-studio music guests on The Late Show with James Corden. An episode of the host’s popular “Carpool Karaoke” series is also apparently imminent. Also coming soon, according to The Hollywood Reporter, is an untitled Jonas Brothers documentary about the band’s reunion that’s coming to Amazon Prime at an as-yet-undetermined time in the future.

Talk about an impressive synergistic roll-out!

A more head-scratching roll-out is that of KAABOO Texas. Say what you will of that festival’s apparent targeting of an older audience with its mish-mash of legacy bands and comedians. Mostly, we’re curious about The Bomb Factory‘s booking of the KAABOO-headlining act The Killers for a gig at their Deep Ellum confines on Thursday, May 9. That’s literally just one day before band is slated to play KAABOO — something we now know for a fact given the festival’s own recent reveal of its own performer schedule. 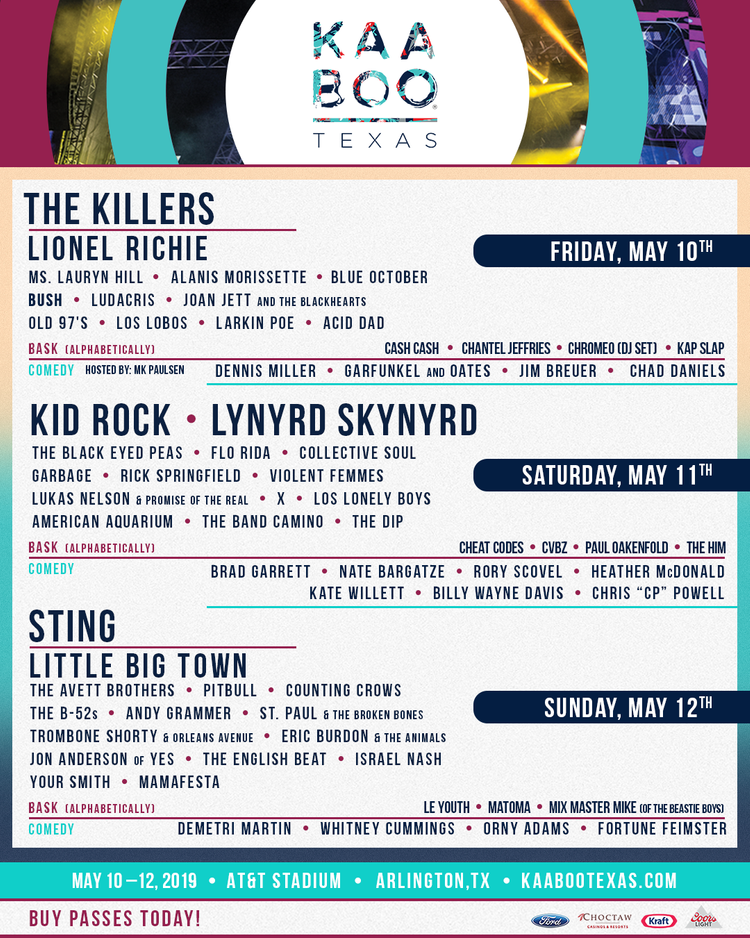 We can’t really make heads or tails of this announcement, and none of our industry contacts are talking yet about how this makes any sense in a world where bands tend to agree to radius clauses when signing up to play would-be destination festivals.

The best course of action, we suppose, is for music fans who dig The Killers but not many other acts on KAABOO to not look this gift house in the mouth, and instead guarantee their way in to see the band in the more intimate Bomb Factory space when tickets go on sale this Friday at 10 a.m. right here.

It’s important, after all, to catch your heroes while you still can, as you never know when this cruel world might snatch them from you. Earlier this week, Keith Flint, the fiery frontman of the British electronic act The Prodigy, was found dead in his home at age 49, the result of an apparent suicide. Needless to say, this means the group’s planned May 5 apparance at South Side Ballroom has been canceled, with promoters today promising full refunds at the point of purchase to all who’d already bought tickets in advance of that gig.

Our thoughts are with Flint’s friends and family as they attempt to pick up the pieces of their own lives following this week’s tragic news. Doing so can take a while.

Some eight months after Pantera drummer Vinnie Paul‘s own tragic passing at the age of 54 due to lingering heart complications last summer, it seems those around him are only now starting to get their houses back in order. Paul’s other band, Hellyeah, just this week announced its first show ever since their drummer’s passing. Billed as “A Celebration of The Life of Vinnie Paul”, the May 11 show is expected to be a star-studded affair with special guests who will join the band in paying tribute to their late friend, with a portion of the night’s proceeds being donated to the American Heart Association. The band will also be releasing some of Paul’s final recordings on an upcoming album, for which they just shot a music video in Brooklyn over the weekend.

Meanwhile, Paul’s old strip club The Clubhouse is also turning the page. Starting this Sunday, March 15, the spot will transition into a new brand called Aces of Dallas at The Clubhouse, which promises to be “the largest hip-hop gentleman’s club in the city.” The spot will still be BYOB, fully nude and open till 5 a.m., but it’s days as a rock ‘n’ roll-themed spot are done. No word yet on what will become of all the cool memorabilia that decorated its walls.

Trophies indeed make for good wall decor — well, so long as they’re clear. That’s something Dallas rapper Bobby Sessions knows well. He even covers the subject directly in the new video for his song “Dirt On Your Trophies”, which dropped this week following following an announcement that he’ll be touring soon with Shady Records freshman Boogie.

Denton’s Eric Pulido too knows a thing about decorating. The former Midlake frontman’s new project, E.B. The Younger, dropped a whopping 9-minute music video for his “When the Time Comes” cut. The clip, set in the pristine Denton watering hole Paschal Bar that Pulido co-owns, was directed by his old pal Jason Lee and styled by Kate Siamro.

Also with a new video this week is Dallas rapper T.Y.E, whose latest Dance Dailey-directed clip promotes the song “PTSD” off of his freshly-released full-length, Tr:32 (Voices).

Lastly, let’s run down a couple other new cuts that are worth your listen to this week, even thought they come without any visual aids.

And, well, that does it till next week.

Cover photo courtesy of Not Ur Girlfrenz. Got a tip for White Noise? Email us!