White Noise: So What?! Music Festival Returns After A Four-Year Hiatus. 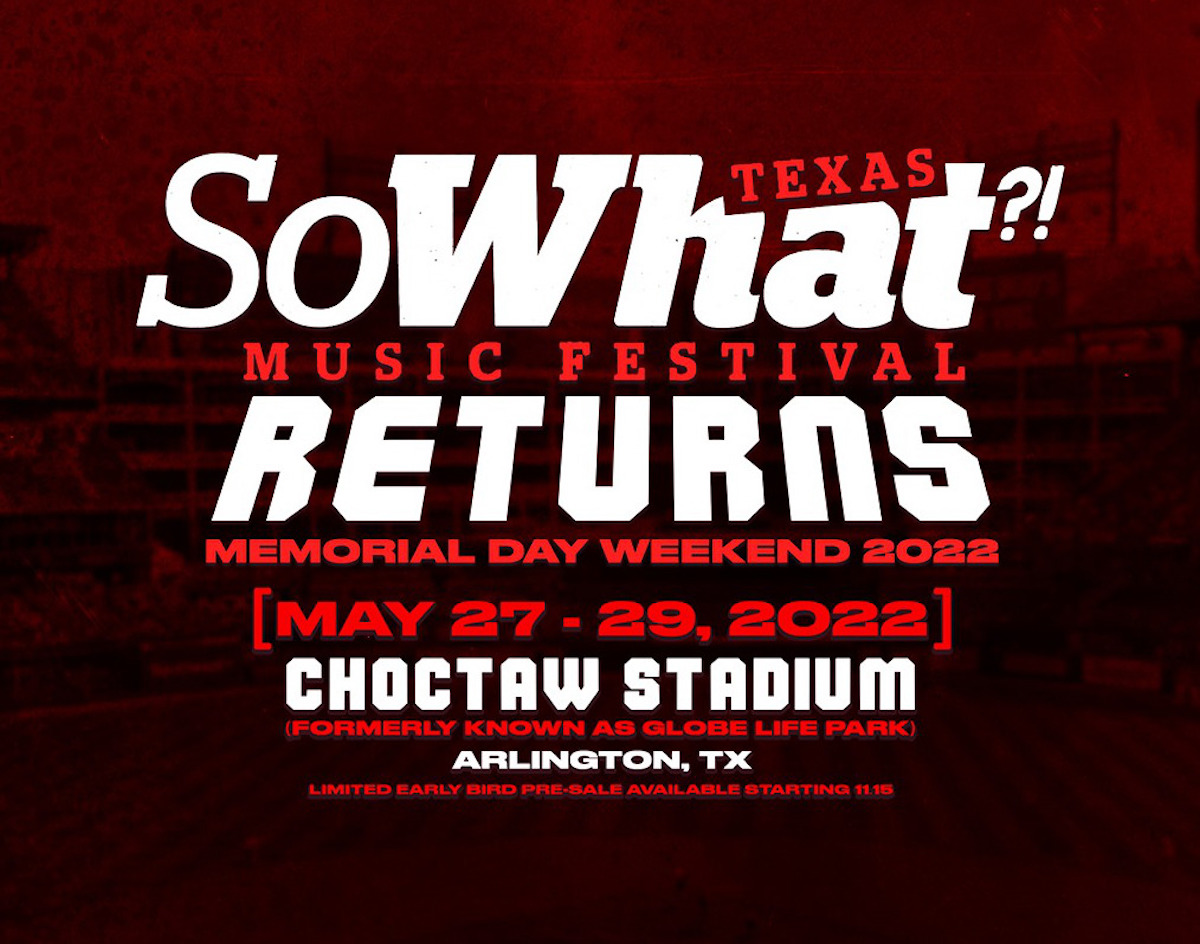 In a twist of events, So What?! Music Festival, the punk/emo version of SXSW and Dallas’ version of Warped Tour, is returning to DFW.

Third String Entertainment announced last week that the festival will be returning next year during Memorial Weekend, May 27-29 at Choctaw Stadium, formally known as Global Life Park, in Arlington. This is the first time the festival will be held since 2017. While the lineup has yet to be announced, So What?! Has previously brought over 50 bands with a mix of metal, rock, indie rock, hip-hop and more.

Asking Alexandria, The Used, Pierce The Veil, Taking Back Sunday and Bring Me The Horizon have previously performed at So What?! since establishing in 2008. So, if you’re a 20-something-year-old, think “high school emo phase.”

The news also comes months after Third String announced its Dallas holiday music festival Unsilent Night would also make a comeback after a six-year hiatus. Last week, it revealed its full lineup, which will include well-known punk and emo acts such as Sleeping With Sirens, Nessa Barrett, Scary Kids Scaring Kids. Some Dallas local acts, such as LiL Lotus, The Polarity, Penny Bored, Dani Lovell, The Crown and House Parties, are also on the bill. Early Bird tickets for that are on sale now here.

Is emo really making a comeback? If yes, then it’s time to stock up on liquid eyeliner and pull your old skinny jeans with the checkered belt from the bottom of your drawer.

While many of us are excited for these upcoming festivals, we are – once again – reminding you to stay safe.

The 10th, and youngest, person is confirmed to be dead after Travis Scott’s Astroworld festival crowd surge. Ezra Blout, a 9-year-old boy from Dallas, died on Sunday in Houston from sustaining serious injuries at the festival. He had been sitting on his father, Treston Blount’s, shoulders when the crowd surged and crushed them both and leaving Treston unconscious before realizing his son was missing. Ezra was found at hospital and was placed in a medically induced coma on Nov. 5 with severe damage to his brain, kidney and liver from being “nearly crushed to death,” according to the lawsuit his family filed against the rapper and Live Nation, the event’s organizer.

The Astroworld tragedy prompted Gov. Greg Abbott to form a Texas Task Force on Concert Safety to make sure incidents like it never happen again. The task force will establish recommendations and strategies by analyzing concert activity. This is meant to protect concertgoers by focusing on crowd control, security measures and addressing controlled substances.

Answers to what happened at Astroworld, however, are still unidentified. Authorities said investigation to why a crowd surge occurred at Astroworld will still take months to answer.

Speaking of comebacks and politics, there’s no way we should omit this man from this week’s White Noise. After a failed Senator and Presidential campaign run, Beto O’Rourke announced he will be running for Texas Governor. We’re sure you’ve heard by now – at least those of you who are still signed up to receive those infamous Beto for Texas campaign text messages.

Third time’s the charm, eh? We shall see. We thought it would be cool to mention him here based on his punk rocker background, which almost got him in trouble with Republicans in 2018. Back in his hometown of El Paso, the Texas Representative was in band with Cedric Bixler-Zavala, who found a successful career in music as a member of Mars Volta and At the Drive-In. Their DIY rock band Foss formed in the early 1990s and didn’t last long, yet O’Rourke’s punk side is still imprinted in his political career.

Trying to kick Republicans out of office is actually very punk rock.

Triller Fight Club, the sports entertainment group, is hosting a combat fighting event at Global Life Field in Arlington Nov. 27. Triller Fight Club, which established last year, announced it will debut its triad combat technique — a two-on-two combat sport with boxing and mixed martial arts elements — at the event that will include a live performance by Metallica.

Triller has previously added that entertainment element to their matches with celebrity guests like Snoop Dogg and Justin Bieber, but Metallica sounds way too fitting for this one. Triller also plans to bring more special guests but are holding back on whom they might be.

So far, we’ve given you some interesting announcements happening in Dallas, but we saved the best one for last.

Get ready for this. No, seriously, because nothing could prepare you for this next one.

Demi Lovato announced they are a new — and first celebrity — ambassador for Gaia, a conspiracy-filled social platform. Gaia, which calls itself the “largest resource of consciousness expanding videos,” is known for its videos about Atlantis, battles between reptilian humanoids, ancient aliens, UFO conspiracies and even acts as a space for QAnon.

According to the press release, Lovato was interested after being introduced to Dr. Steven Greer, founder of the Center for the Study of Extraterrestrial Intelligence, and his meditation protocols intended to make contact with extraterrestrials. On Instagram, Lovato shared that “understanding the world around us, both known and unknown, and diving deeper into areas that expand our consciousness is exciting.”

That’s great, Demi. We wish you luck. A lot of it.