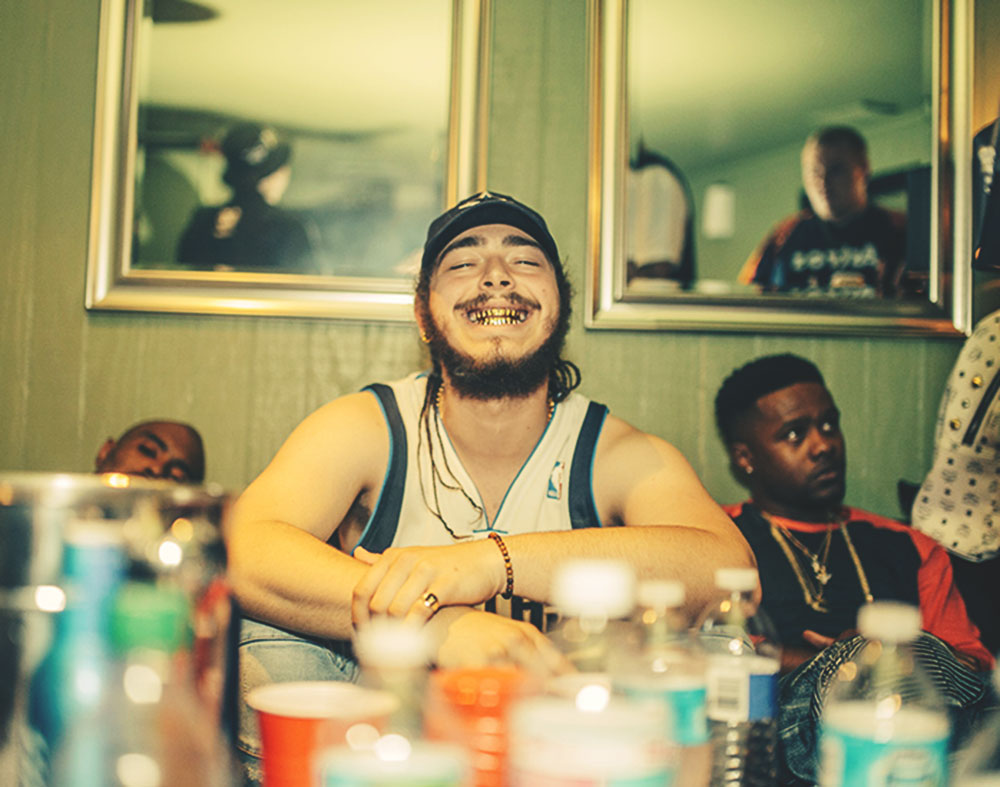 If you see Central Track as a mere gossip rag that fixates too heavily on Post Malone, you’re not going to like this week’s installment of White Noise.

Where to begin? You may recall that we referred to last week as the start of Post Malone Season™, and yes, that’s pretty damn accurate. On top of dropping his third full-length Hollywood’s Bleeding with features from heavy-hitters Travis Scott to the Prince of Darkness himself, Ozzy Osbourne, Mr. White Iverson dropped the lineup for the highly anticipated second installment of Posty Fest. As we reported yesterday, the lineup is as star-studded as ever:

At a glance, jousting may seem like a random festival amenity, but on Friday’s episode of The Tonight Show, Posty and Jimmy Fallon both jousted at Medieval Times (but not before feasting). Perhaps that provides a bit more context, but honestly, who needs that whenever you have the opportunity to joust to Pharrell and Rae Sreummurd?

By way of more somber news, Stoney revealed in an interview with Zane Lowe that before Mac Miller’s death last year, they were in talks to record a collaborative album.

“We were going to make an album,” Malone said. “We were sitting there playing beer pong and we were like, ‘Let’s make a fucking album.’”

Sadly, we will never get to see the two collaborate, and it leaves us wondering what could have been.

Still, if you’re longing for a who’s-who of marquee names on a single project, look no further than The Highwomen. The supergroup consisting of Maren Morris, Brandi Carlile, Natalie Hemby and Amanda Shires just dropped its self-titled debut album via Elektra Records. Veteran producer Dave Cobb is behind the release, with guests artists that include Jason Isbell, Sheryl Crow and Yola. The group also took time out for a profile in The New York Times to talk about the challenges of being women in a male-dominated industry. We stan.

Hollywood’s Bleeding and The Highwomen is a pretty decent haul so far, but if you’re looking for something else to add to your record collection, the Texas Rangers Baseball Team is hosting a Vinyl Night on Friday, September 13. (Three days from now!) And Jack White fans, take note.

Per a press release, “The addition of Vinyl Night at Globe Life Park gives Rangers fans a unique commemorative item, combining Rangers history with Jack White’s legendary hit “Battle Cry.” If you decide to watch the Rangers play the Tampa Bay Rays and find yourself itching for a commemorative 7-inch, note that Side B of the record has “an exclusive Ranger themed version of the song.”

Of course, this isn’t the first time White has participated in a baseball-related venture in our fair city – in 2017, we reported the brainchild behind Third Man Records, White Stripes, The Raconteurs and Dead Weather teamed up with Lake Highlands native Ben Jenkins and Ian Kinsler in opening a Deep Ellum headquarters for a baseball bat company called Warstick.

About 40 miles west of that, Fort Worth’s Amon Carter Museum is making a highly-anticipated comeback later this week as the annual Party on the Porch commences on September 14. Three days prior to this, Negative Gemini (the solo project of Brooklyn producer and pop artist Lindsey French) will be playing a show curated by the promoters behind Fortress Festival. Should you decide against leaving the confines of Dallas, you can catch French at Canton Hall on November 5 as she opens for Kero Kero Bonito. Holy disregard for radius clauses, Batman!

Still, you should get out more and subsidize the arts. What better way to do this than to chip in for Thin Line Fest’s 11 Days of Giving, a fundraising campaign for the nonprofit festival that started yesterday. In March of this year, we exclusively announced the full lineup for this year’s installment of the festival, and while the lineup wasn’t something that would compete with Austin City Limits or Levitation, it’s still impressive that they’ve been making each offering free to attend since 2017. And based on some figures we were told on the low, it looks like Thin Line has considerably more funding for 2020 – imagine the possibilities if it had more!

Yep, the concert industry is tough, and organizing shows needs to be a labor of love. Nobody knows this better than Deep Ellum Art Co., which just celebrated its two-year anniversary last week. In that two-year stretch, the midsized venue has hosted countless acts from up-and-comers to larger names such as Gus Dapperton, (Sandy) Alex G, Wavves, Jamila Woods and Connan Mockasin. Other shows on the horizon for the venue-that-could include Mercury Rev, This Will Destroy You, White Reaper, Russian Circles and White Denim. Despite some reported struggles and the challenge of competing in a heavily crowded space, owner John LaRue has made the room one of Deep Ellum’s most respected venues as of late. That’s a remarkable achievement.

While we’re on the topic of remarkable achievements , let’s look at some new releases deserving of your ear:

Experience a more verdant glitch in the matrix with Keanu Leaves’ new EP I FEEL FINE:

Rapper (:hristian released dummy ep, and there’s no better way to start an EP than with the lyrics “I just fucked your mom inside the bathroom at the Olive Garden”:

Cuban Doll dropped a new video for a banger called “AGF” featuring Rubi Rose and Renni Rucci and likely to put you in the mood to twerk: