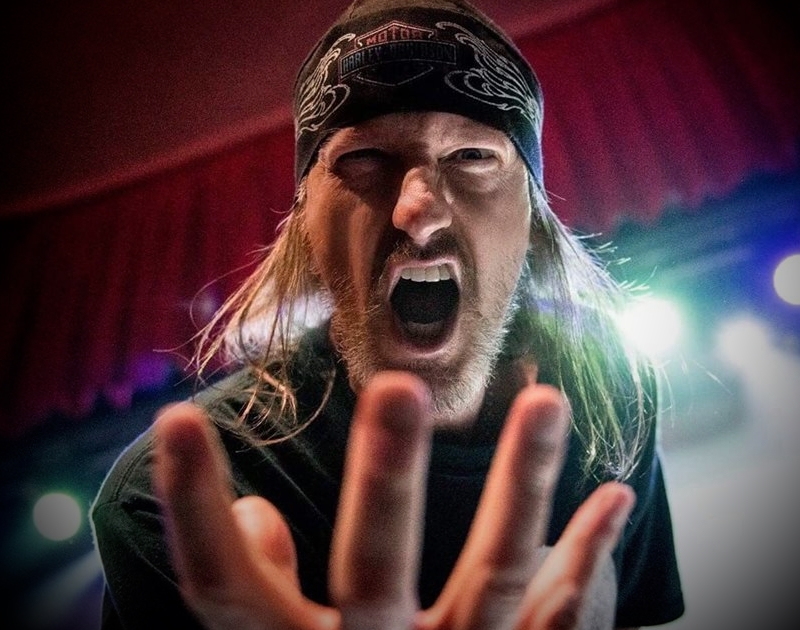 Two weeks after checking himself into hospice care, the pioneering and legendary Dallas thrash vocalist Bruce Corbitt has died.

Best known as the frontman for Rigor Mortis, which formed in the ‘80s and was once signed to Capitol Records despite the fact that the band penned nothing but songs about death during the height of the PMRC scare, Corbitt cheated death several times, once when he was stabbed during a show in the ’80s and another time while watching his bandmate Mike Scaccia die onstage during a 2012 performance in Fort Worth.

For the past two years, though, Corbitt’s been incredibly upfront about his own mortality — something he publicly came to terms with throughout his ongoing battle with esophageal cancer, which eventually spread throughout his body.

On Friday, January 25, Corbitt finally passed. He was 56, but his fighting spirit and legacy live on. Many of his bandmates, along with other members of the metal community, are quoted in this excellent new Billboard write-up — including the below video tribute from “rival” singer Phil Anselmo of Pantera.

If it feels like things have been extra brutal of late in this regard of late, that’s because they have been. Beyond also prematurely taking drummer Scotty Tecce in recent weeks, we’ve also received word that Fort Worth musician Jayson Wortham is currently battling Hodgkin’s Lymphoma, a type of blood cancer.

Unable to work given his diagnosis, the Dove Hunter singer/guitarist has chosen to forgo conventional treatments in favor of alternative therapies, which you can help subsidize by donating to his GoFundMe page. Funds for Wortham’s care will also be raised via the sales of a new collection of Wortham’s songs that have been made into a gold seven-inch, which is available to preview and pre-order below. Physical copies are to be released on March 18.

In better health-related news, the Charley Crockett camp that announced that the Americana performer’s own recent surgery to address longstanding heart issues was successfully completed. Says Crockett via a social media update from earlier this week: “The last 5 months have been a wild ride through the medical world, insurance, learning about how all these things work, and making the decisions necessary to save my life. I’ve got so many stories to share with y’all at another time, but right now I just wanna tell you that I made it through the dark and that I came home today to start on the road to healing. This charging bull got himself a new transmission good for a million more miles. Thank you for blessing me with your positive energy. I feel y’all lifting me up. I’ve been turning my curse into a blessing since 1984 and y’all can always count on me to come over that next mountain top.”

Moving on, a handful of big show and fest announces have come down this week. The Elm Street Music & Tattoo Festival has announced plans to return on May 17, 18 and 19, although no performers have been announced yet. Cody Johnson, meanwhile, is leveraging his newfound mainstream success into Fort Worth festival called the Cody Johnson Throwdown, which will take place at Panther Island Pavilion on June 29. Combining music and food, Taco Libre will return to the Dallas Farmers Market on April 27 with a handful of musicians, including the legendary Tejano musician Flaco Jiménez, in tow. And, on February 23 at the House of Blues, the venerable Reverend Horton Heat will play a special 30-year anniversary gig celebrating its bass player Jimbo Wallace‘s three decades in the band.

Sometimes, though, you don’t get fair warning like the type we offered up above. Take, for instance, what went down this past weekend, as country megastar Cody Jinks forewent the 5,000-capacity rooms he’s now used to playing in order to play a secret pop-up gig at his old Adair’s Saloon stomping grounds.

Moving on, Allison Ponthier premiered a new video via Billboard. Says the ex-pat Dallas musician in a statement: “‘Gross’ isn’t about putting on an $18 face mask and calling it self-care; it’s more about giving yourself permission to be human. I’m constantly seeing tweets like, ‘Fellas, would you ever date a girl with cellulite?’ or ‘Fellas, would you keep your son in your house if he wore makeup?’ Seeing the constant policing of specific groups of people is so rage-inducing, so writing this song was really cathartic.”

Another new video out this week comes from Flower Child, who adopts a ninja persona in her “Spadistic Explosion” clip, signifying the manner in which she plans on slicing all these mumble rappers with her actual rhyming skills.

Closing out another successful rundown of local music news and notes, here are some quick-hitting, bulleted stories that should also be on your radar:
• Aquaman star Jason Momoa recently expressed some praise for Fort Worth country boy Vincent Neil Emerson on his Instagram account after catching him on tour with Colter Wall.
• Old 97’s frontman Rhett Miller has launched a new star-studded podcast in which he talks to his fellow famous creative types about how they channel, well, their creativity, we guess.
• Denton public radio station KUZU is broadcasting 12 hours of live music performances via a video stream on Saturday, February 2, to raise it’s latest round of operating funds.
• Grapevine’s own Post Malone, who is up for four Grammys this year, will perform live at the big ceremony alongside Red Hot Chili Peppers. You may recall his performance alongside Aerosmith at last year’s MTV Video Music Awards. It’ll be kind of like that!

Bruce Corbitt cover photo via Housecore Records. Got a tip for White Noise? Email us!