White Noise: Is North Texas About To Finally Get A Real Destination Music Festival? 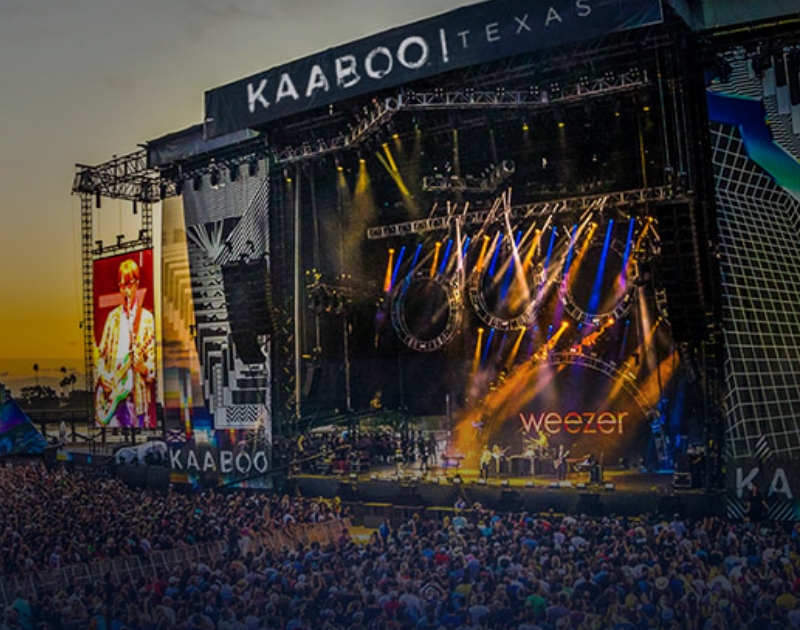 Just about every time we catch wind of a new festival around these parts, we make some kind of snarky quip through which we question just how many fests this town needs.

Crowded though that landscape may be, it arguably still lacks that one, big, marquee Coachella-caliber event that draws in attendees from all over the globe. For all the great local music festivals that Dallas-Fort Worth hosts each year, the sad fact remains: It has always lacked a real destination fest.

That looks to change in 2019, though, as San Diego’s KAABOO Del Mar plans to bring a version of its luxury fest to Jerry World.

Last week, the Jones Family announced a partnership with the KAABOO brand to bring a three-day, immersive fest experience to AT&T Stadium next May 10, 11 and 12. Per a press release, the event will feature “equal parts world-class music, household names in comedy, contemporary art, gourmet cuisine and craft libations, and ‘personal indulgences.’”

This year’s Del Mar event sold out all its passes for the first time in its four-year history. It’ll really be something if the organizers manage to repeat that feat in North Texas, where early-bird, three-day GA passes are currently on sale for $259, with three-day Blue Star and Rockstar (VIP) packages are going for $899 and $3,999 respectively.

But if the San Diego one this year is any indication, those millionaire concertgoers are gonna have a real blast! While the North Texas version of the fest won’t announce any bands until early next year, Foo Fighters, Robert Plant and Imagine Dragons all played the San Diego one earlier this year.

Speaking of raising the bar: Dallas-area producer duo Play-N-Skillz have been nominated for a Latin AMA in the “Favorite Song – Tropical” category for their Steve Aoki, Daddy Yankee and Elvis Crespo collaboraiton “Azukita.” That song was also recently certified platinum, while another of the twosome’s recent singles, “Cuidao,” was certified gold.

Similarly, Yella Beezy’s “That’s On Me,” beyond long having become a certified Dallas street hit, was not only recently certified Gold, but it also currently stands as the No. 1 song on Urban Radio, according to Mediabase‘s radio airplay charts.

Also earning a numerical accolade this week was the Midlake-sprung BNQT, which ranked No. 47 on Paste’s list of the top 50 supergroups of all time. The top spot on that one, of course, was secured by the Dallas-born Stephen Stills and his CSY cohorts.

Another solid bit of press was earned this week by M83’s touring keys player Kaela Sinclair, who was featured in a blog by botanical hair product line REVERIE. Sinclair, who was in town this week as a touring member of Troye Sivan’s band when it stopped by the Pavilion at Toyota Music Factory, talked to that company about her globetrotting ways and her upcoming Half Asleep EP, which comes out October 5.

Also keeping busy is The Voice judge, Kelly Clarkson, who is adding another full-time gig to her plate. Starting this fall, the original Idol will be getting her own daytime talk show, which will air on NBC.

Moving on, a pair of tunes from Leon Bridges and Luke Combs’s episode of CMT’s Crossroads have been released as singles. Yes, Bridges’ “Beyond” and Combs’ “Beautiful Crazy” are now crossover duets, folks — and you can hear them below.

Bridges’ “If it Feels Good (Then it Must Be)” also got the video treatment, with a clip released earlier today. A globetrotter himself, this one was filmed in Paris even though the song’s opening lines reference Fort Worth.

Another new one out this week comes from rapper C Struggs, who you might recall lost his two-year battle with cancer last month. The video for his “How it Happened” is a testament to his endless spirit, though, as it was filmed from his hospital bed.

There are lots more videos to get to this week, too — like the one below from 17-year-old Booker T. student Tippy Balady, whose debut EP is still forthcoming. Regardless, she’ll be performing songs from it this Friday at Breda Studio first.

And here’s one from Dallas-sprung rapper FXXXXY‘s collaboration with Gunna called “Need U.” The former told The Fader that he was inspired by Spike Lee and Hype Williams when thinking about the concept for this visual.

And, as if the new single from Astrus and Nate V wasn’t strong enough to earn these newcomers a pile of attention on its own, the video directed by wunderkind Denton filmmaker Ciara Boniface really puts this one on next level. Watch out now!

Finally, as we frequently do, we leave you with a trio of quick-hitting notes:

• Polyphonic Spree side project Plandroid is on its way up to Chicago this weekend to cut a record with the iconic indie rock producer — and champion poker player — Steve Albini.
• When the Dallas-spring Snarky Puppy side project Ghost-Note hits Deep Ellum Art Co. on October 26, it’ll feature viral video star Dywane “MonoNeon” Thomas Jr. in its lineup on bass.
• And, in somber news, Eagle Audio engineer Jeff Ward passed away over the weekend. He played a role on a huge number of memorable Fort Worth records over the years, and he will be greatly missed.

KAABOO cover photo via. Got a tip for White Noise? Email us!