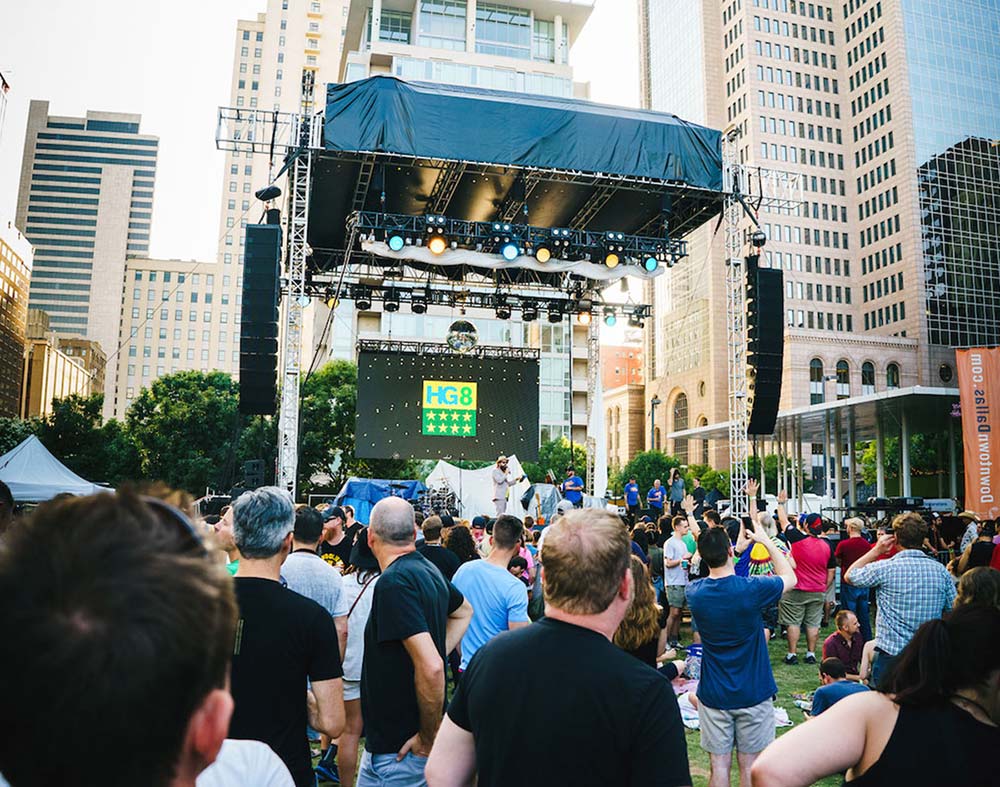 Homegrown Could Be In Danger, Starplex Stays Thirsty and The New York Times Takes A Look At Maren Morris’ Rise To The Top Of The Pops.

Seems the best day of the year in Dallas music could be in danger of not happening in 2018.

On Sunday evening, Josh Florence — the Club Dada, City Tavern, Off The Record and Independent Bar + Kitchen co-owner behind the Homegrown Music & Arts Festival that takes place annually each spring at Downtown Dallas‘ Main Street Garden Park — sent out an email to friends and family of his festival, alerting them that the ninth annual edition event that’s set to take place on May 12 is in danger of not taking place due to low ticket sales.

“We’re at a loss,” the email read, noting that the festival has followed the same marketing that it has successfully used to draw crowds out to its offerings in year’s past and Florence writing that he feels this year’s lineup of Explosions In the Sky, The Black Angels, Alvvays, Roky Erickson, Ume, [Daryl], Vodi, Medicine Man Revival, Duell, Acid Carousel and Sad Cops is “solid,” which it is.

And so, following the Blind Butcher model, Florence is making his plight publicly known. In an interview with Robert Wilonsky at Guidelive, Florence chooses not to blame festival overload for his festival’s sticky situation, but is instead simply letting the public know that, without buying tickets for the fest ASAP, the festival might be forced to not take place this year.

“We owe it to our staff and to the bands to leave it all on the field and try everything in our power to succeed this year, even if it means swallowing our pride a little, which is not easy,” Florence tells Wilonsky. “It’s not our M.O. to pull the curtain back. But the response we’ve received from our industry family and friends and from Downtown Dallas Inc. has been overwhelming. I literally have a lump in my throat talking about it. It’s awesome to feel the support and love.”

Florence might look to Rigor Mortis and Warbeast vocalist Bruce Corbitt this week for proof that miracles can happen and turn even the most dire situations around. After revealing earlier this year that his doctors had told him that he was without a doubt going to lose his battle with esophageal cancer, Corbitt took to Facebook today to reveal that, against all odds, his “white blood cells, platelets and everything have all shot back to normal.” In the uplifting video in which he shares the news, Corbitt calls the development a “miracle” and announces that “there’s no stopping [him] now.” We here at Central Track are certainly pulling for him, that’s for sure.

In other interesting news,  it seems the Fair Park amphitheater venue’s return to being known as Starplex was as short-lived as anticipated. Just a year after after reverting to its old name, the venue announced in advance of its season-opening Foo Fighters show this past weekend that it would now be known as Dos Equis Pavilion as part of a “multi-year agreement. Alas, the press release announcing the the news doesn’t use the word “interesting” even once, apparently because the beer just dropped its “The Most Interesting Man In The World” campaign — and for good this time. Shame, as we were looking forward to referring to it as “The Most Interesting Venue In Dallas” moving forward.

Alas, that title may in fact belong to the new Box Garden stage at Plano’s Legacy Hall, which the Dallas Observer announced this week as an eco-friendly spot given its use of recycled shipping containers in its build-out. Dallas indie pop darling Sarah Jaffe will kick off the new stage’s life cycle as she headlines its grand opening on Friday, May 18. Tickets to that affair will run $25 and are available for purchase right here. Oh, and if you were curious, the Observer reports that the venue will be able to seat 400, while also boasting room for another 1,200 standers.

In a wild turn of events, the Denton ex-pats in Parquet Courts brought the reigning queen of queen of daytime talk to her feet when they performed on The Ellen DeGeneres Show today. Degeneres revealed herself to be a fan as she introduced the band to her crowd and described their May 18-due, Danger Mouse-produced album’s title track “Wide Awake” as “a song that [she loves] so very much.” Check out the performance below, then get your somehow-still-available $20 advance tickets to the band’s gig this Saturday night at Sons of Hermann Hall right here.

You’ll want to be at that Sons of Hermann Hall show, for sure. Because — as the second video, which finds Parquet Courts performing another handful of tracks for the famed Seattle-based radio station KEXP, shows — the band is experiencing something of a kickass moment. Check it out:

Also riding high this week is the Arlington-sprung a capella group Pentatonix, whose new collection of pop covers, called PTX Presents: Top Pop, Vol. I, debuted at No. 10 on the Billboard Top 200 Albums chart this week.

That’s some solid charting — but not quite on the level of their fellow Arlington ex-pat Maren Morris, whose “The Middle” collaboration with Zedd got her to the No. 1 spot on Billboard‘s Hot 100 Singles chart a few weeks back. The country star’s crossover into pop was so successful, in fact, that The New York Times reached out to everyone involved in the track for an inside look into how it got made and how long it took to get Morris to it. The result is a very cool mini-documentary that is absolutely worth your time.

Sticking on the subject of interesting mini-documentaries, Mass Appeal also released on on Post Malone this week. Centered around Yung Posty’s stop at The Bomb Factory back in October, the clip features insightful interviews with the Grapevine native’s manager, former bosses, old teachers, friends and fans. It’s a cool look at an artist who is just as surprised as everyone else about his success.

Now, to close out this week’s column, let’s get into some of the week’s area releases, yeah? OK!

Rapper Jayson Lyric, who has been absent from public view for a minute, returns this week in a big way with a video for his song “Still Got It.” Turns out, he does!

Meanwhile, the ever-prolific dudes in The Outfit, TX dropped a new Dance Dailey-directed video for their DJ T-Walk produced “Rope A Dope” track.:

Soundscape artist IAMYU, on the other hand, released his first-ever music video this week. You can check out the ethereal, Nick Lewis– and Stephen Carmona-featuring “Nuclei” below.

Rapper B. Anderson actually touches on some similar sonic themes in his new cut, “Average,” which is a nice return to the scene from him, as well.

Electro-pop scene giants Ishi, meanwhile, have a new single out called “Galaxy Child” that comes readymade with a Redsean remix also in tow.

Then, to close out things this week, comes this return from Yung Nation, which sounds like something to get excited about, although the freestyle track does leave a little to be desired. Here’s hoping there’s more, and better, offerings where this one comes from.

Homegrown cover photo by Karlo X. Ramos. Got a tip for White Noise? Email us!