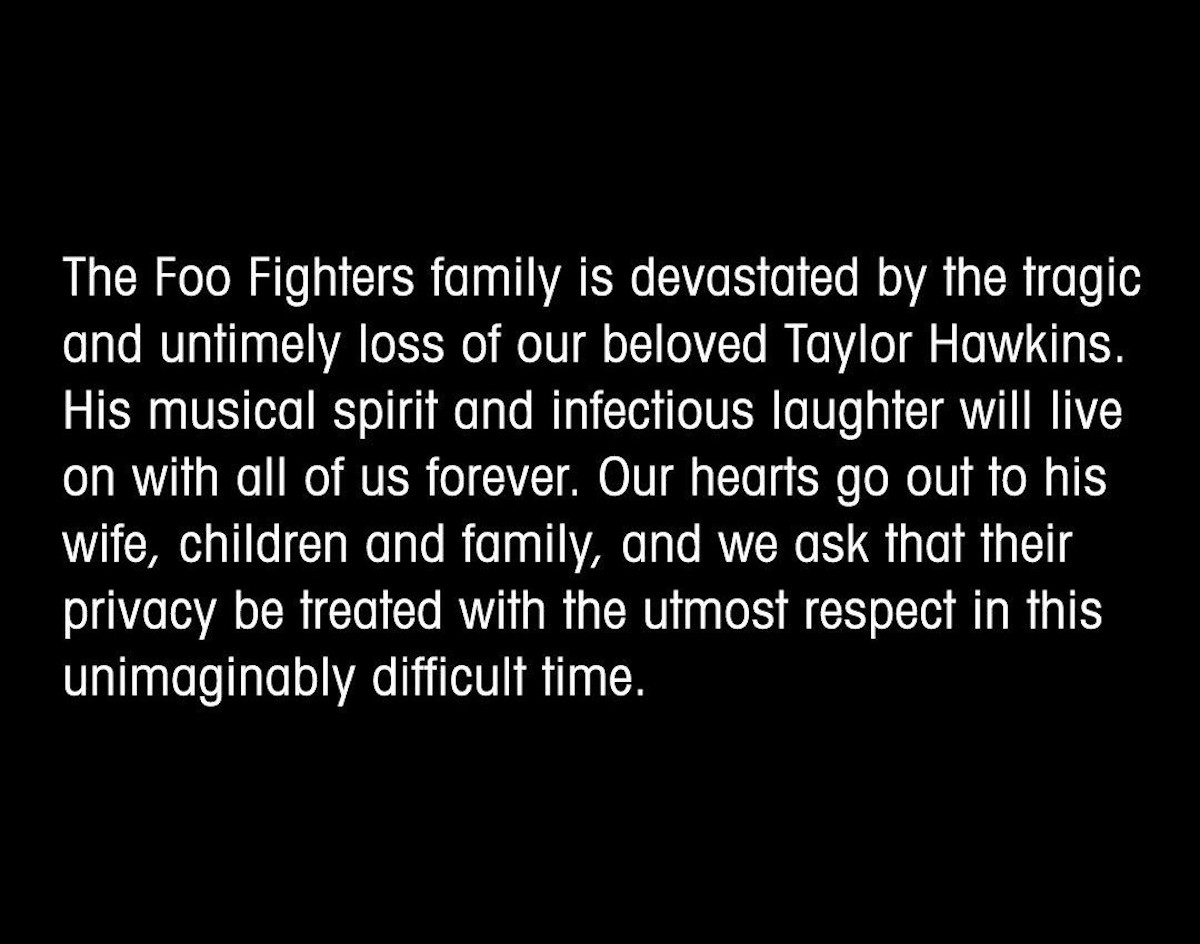 During the legendary Foo Fighters’ current South American tour, the group’s drummer was found dead at the age of 50. Taylor Hawkins, a Fort Worth native, drummed for the Foo Fighters for 25 years and was best friends with founder David Grohl — a devastating death for many.

The band was at its Bogota, Colombia stop when Hawkins reported chest pains, causing emergency officials to rush to the scene and help him out. At this point, it was too late, and healthcare workers were unable to revive him.

After the announcement, many fans raced to the internet to learn what could have happened to him. His cause of death is unknown and investigations are taking place as we speak, but toxicological tests show that 10 psychoactive substances were found in his body.

We’re sending a big “rest in peace” to Hawkins and giving our condolences to the group, his family and friends.

On a lighter note, Roxy Music recently announced its first North American tour in almost 20 years to celebrate the 50th anniversary of its self-titled debut LP. The performers will stop at American Airlines Center Sept. 23, following a show in Austin two days before.

Tickets will drop Monday for this 10-stop tour, just in time for the two-year anniversary of their induction to the Rock & Roll Hall of Fame. Why are we mentioning this English band? The founding members (Bryan Ferry, Andy Mackay, Phil Manzanera and Paul Thompson) will be joined on the road by special guest St. Vincent, who will support eight of the tour’s stops, including Dallas.

We have another show coming up in Dallas, and this one is going down Thursday. It’s the sixth annual Wale’s Walemania VI (with two years missed — thanks again, COVID), a pro-wrestling-themed musical event at the House of Blues. Opened by professional wrestling recap show The Ringer’s Masked Man Show Podcast, this event will welcome David Shoemaker and Kazeem Famuyide.

The event’s performers will include Swerve Strickland, Ricky Starks, Machine Gun Karl Anderson and many other artists. This year’s event also welcomes a new partnership with Spotify and exclusive merch from Foot Locker that combines Wales wrestling and sneaker-related interests. Tickets are still available on the House of Blues’ website, so make sure to grab ‘em while you can. And if you you’re in need of more WrestleMania-related outings, we got you covered.

In the vein of live shows, Dallas Summer Musicals is undergoing a name change — the 81-year-old organization is now known as Broadway Dallas. The new identity gives the group a chance to incorporate new sub-brands to continue serving the Dallas community as part of its mission to invest in educational programs and community partnerships.

The name change is also helpful since the organization puts on shows year-round. Along the name change came the announcement of its 2022 lineup, kicking off with Ain’t Too Proud: The Life and Times of the Temptations in September and My Fair Lady at the start of November.

Lastly, in case you missed it, an 11-year-old drummer from Aledo shredded the drums with Seattle’s Candlebox for a song in its Dallas concert on Saturday. The band’s vocalist Kevin Martin discovered Austin Arbelaez through an Instagram post, and as someone who started drumming at 10 years old himself, he wanted to get the young musician on stage — especially after seeing his Korn and Metallica-inspired videos that he regularly posts. They welcomed Arbelaez on stage to perform “You,” a 1993 Candlebox hit that came long before he was even born.

We also couldn’t helped but notice that Denton’s own Flickerstick follows Arbelaez’s Instagram as well. Maybe there’s hopes for a collab there as well?