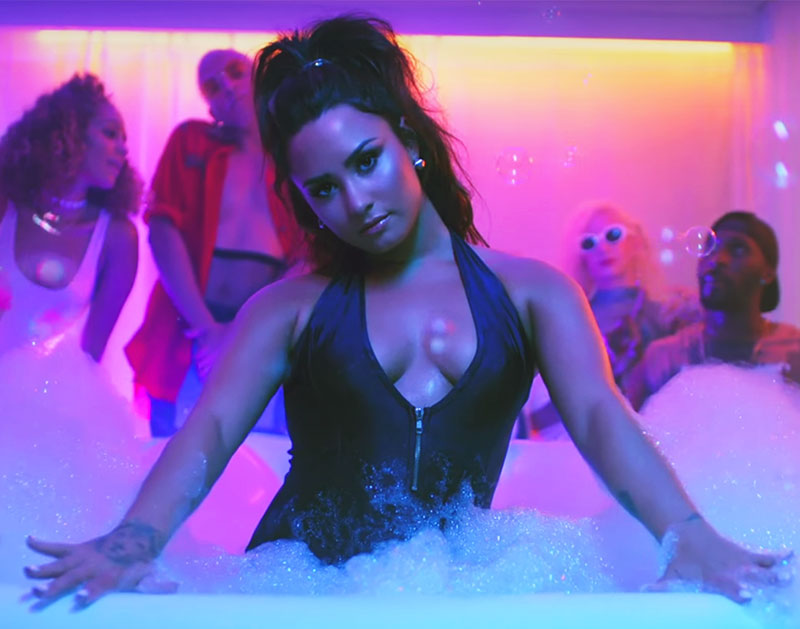 Demi Lovato Slayed All Comers This Weekend, Todrick Hall Backed Up Taylor Swift And Siamese Changed Its Name To Midnight Opera. Plus More!

It’s been a busy summer for Colleyville’s Own Demi Lovato, with the 25-year-old pretty much constantly promoting the “Sorry Not Sorry” single off her upcoming Tell Me You Love Me LP, be it through releasing music videos for the song or throwing house parties in her fans’ homes.

But this weekend, she really went big. First, on Saturday night, she had the honor of performing the national anthem before what felt like the biggest fight of the decade as Floyd Mayweather and Conor McGregor clashed in Las Vegas. And she nailed it, too!

Why was there a fight during a Demi Lovato concert? pic.twitter.com/6822i1Bi2r

But that’s not all the pop superstar did this weekend. She also performed at the 2017 MTV Video Music Awards on Sunday night. Here’s that footage:

Speaking of pop superstars, Taylor Swift returned to the spotlight over the weekend with the release of her comeback single “Look What You Made Me Do” and its accompanying music video, and a Dallas-sprung talent features prominently in the video. Yup, that’s YouTube triple threat Todrick Hall dancing right by Swift’s side, showing off his choreography skills as part of her crew during the dance breakdowns. Check it out.

Turns out, the two have been friendly since 2015, when Hall posted a mashup of Swift’s hits songs that now has almost 6 million views. Since then, Swift has even supported the local artist during his run on Broadway in Kinky Boots.

Moving on, Garrett Owen may not be a pop superstar just yet, but they guy’s definitely got some talent. Case in point: The moody country singer and songwriter just released a new video for his song “Rose Hill,” which you can check out below and, if you dig, see him perform live when he opens for Charlie Sexton this Friday at the Kessler Theater.

Also out this week is a new track from Ronnie Fauss, who is back and ready to promote his upcoming third album, Last of the True, which will be released October 27 via New West’s Normaltown Records imprint. Notably, “Saginaw Paper Mill” finds Fauss teaming up with North Texas indie rock hero Ben Kweller for qhat Fauss describes as “a crunchy, devil-may-care rocker with honky-tonk piano and some hazy, road-trip ready visuals to boot.” If that isn’t specific enough for you, give it a listen below.

Then there’s Cure For Paranoia, which just released a music video for “Wired,” a cut from their upcoming album of the same name. The Jeff Adair-directed video isn’t the only news the Deep Ellum favorites have, though, as they’ll also be joining Slim Thug and Z-Ro on a 10-city Texas tour starting later this fall.

Taking things in a far more explicit direction is rapper Lil Ronny MothaF has once again gone viral with his video for his new song, called “Cool It Now.” The video has mostly garnered attention for its very NSFW sex scenes that might’ve been too much even for the long-gone BET Uncut series. It’s a lot to take in, but that’s also why it’s going viral on Twitter. Of course, this is part for course for marketing master Lil Ronny, who garnered viral success off his song “Circle (Throw That Ass In A Circle)” when Beyonce danced to it mid-performance at the 2015 Made In America music festival that was live streamed on the then-brand-new Tidal. (It’s worth noting, though, that the song was a hit before then.)

Speaking of viral hits: Another local rapper who’s still in the midst of his fame expanding is 17-year-old incarcerated Arlington rapper Tay-K, whose hit song “The Race” has now moved up to No. 49 on the Billboard Hot 100 chart while coming off a week that saw him featured in The New York Times.

One act that deserves that kind of attention, for sure, is the band we first met as Siamese earlier this year. That band’s The Mesmerist rightly generated quite the buzz around town when it was released, and the band’s only since built upon that early attention thanks to the stunning visuals and choreography of its fantastic live performances. Alas, the band will be known by a different name moving forward: In a press release sent to Central Track, lead vocalist Teddy Georga Waggy announces that the band will henceforth be known as Midnight Opera. Per Waggy, the new name is “Regal. Velvety. Lustrous. And most importantly nobody else is using it.” You can help the band ring in its new name as it kicks off an 11-city tour with a gig at the Double Wide on August 30 alongside Nervous Curtains. For a solid taste of what to expect, check out this cool video produced by the Milkwaukee-based Hear Here Presents that the band also passed along our way.