Once Down, What Do We Do With Confederate Monuments? 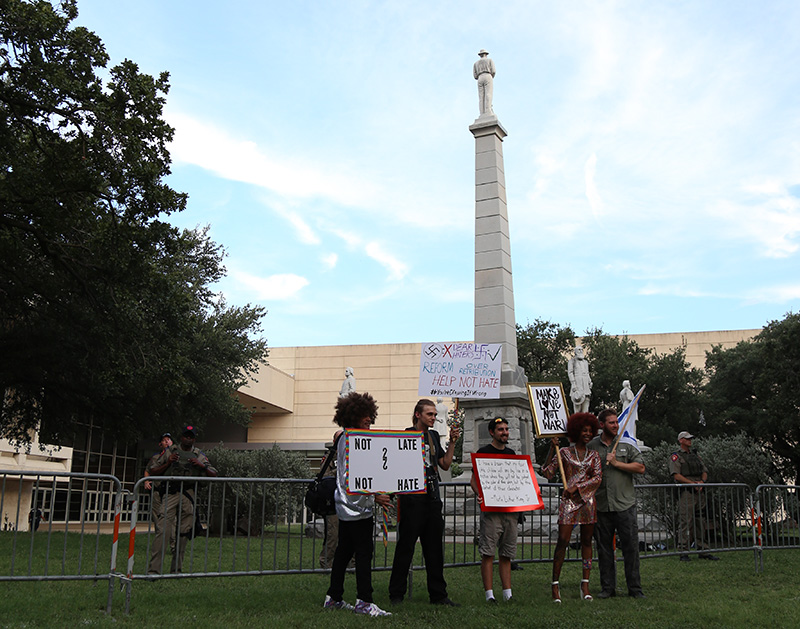 Since We Apparently Can’t Just Take Wrecking Balls To Dallas’ Confederate Monuments, Here’s A List Of Options To Consider For These Statues’ Futures.

It’s beginning to look more and more like a foregone conclusion that public monuments to the Confederacy around Dallas will probably soon be a thing of the past.

That door was officially opened on Wednesday when Dallas City Council voted 13-1 to immediately remove the statue of Robert E. Lee statue from its namesake park. Sure, the removal was temporarily halted by the Sons of Confederate Veterans with the help of a white supremacist attorney after they argued in court that the removal was a violation of due process and freedom of speech — but a federal judge ultimately ordered that the removal could go ahead. And so crews are now currently preparing to remove the Lee statue from its perch in Uptown, and to place it in storage… somewhere. Meanwhile, Mayor Mike Rawlings’ task force on the matter is debating whether to suggest the removal of the stone monument to the Confederacy at Pioneer Park in Downtown Dallas.

Also on the task force members’ to-do list, though, is entertaining another question: What do we do with the remains of these two monuments?

Mayor Pro Tem Dwaine Caraway told Fox 4 a couple of weeks ago that we can’t simply destroy these monuments: “We’re not going to destroy history,” he said. “If it was a simple wave of the magic wand, I’d have played Bewitched and wiggled my nose, and they’d be gone. But where are they going? That’s another fight.”

When we ran the numbers, we determined that the stone monument could be removed for $325,000 — more than $800,000 less than the city’s own $1.2 million estimate for that statue alone. When our numbers were applied to removing both statues, we saved the city more than $1 million in total. For kicks, we finished out thought experiment by putting that extra money toward the purchase of a warehouse where the monuments could be stored in perpetuity.

And, hey, our math was spot on, too! City Council member Philip Kingston basically said as much in a Facebook post, noting that he has in fact been contacted by several actual construction companies that would do the two jobs for a fraction of what the city staff suggested.

Seeing as how we’re so smart, we’ve now decided to offer up a few solutions for the mayor’s task force and the City Council as they decide the fates of these tributes to the side that lost the Civil War.

Put them in the Hall of State at Fair Park. The Hall of State at Fair Park already hosts a couple of Confederate monuments, like the Confederate star and a stone sculpture that represents the confederacy. As is constantly said, these statues and monuments are a part of history, so maybe we should let them be a part of our history in a museum. Plus, this museum is also owned by the city, which means the costs of putting these on display should be minimal.

Move them to the Confederate War Cemetery. Just south of Fair Park, this city-owned cemetery already holds the graves of Confederate veterans and some of their family members, and is maintained by city workers. So the costs would be minimal, for one thing. But, also, moving the monuments here fits the aesthetic theme!

Ditch ’em in some cheap warehouse somewhere. So, as previously stated, our own estimate to remove Dallas’ public Confederate monuments saves the city more than $1 million, which, as we found, is more than enough to purchase a small $542,000 warehouse wherein the pieces of the stone monument and Lee statue can be stored. So let’s just take that semi that our estimate calls to needlessly rent for 30 days and have it move those pieces to the warehouse we just bought!

Auction them off. Considering that there are a lot of people out there who are upset that these monuments are coming down, let’s allow them to put their money where their mouths are by buying them and taking them off our hands. The people of Dallas clearly don’t want them, but let’s throw the chest-out Facebook commentators who complain about their removal a bone and let them house these suckers on thewir own pieces of land — for a cost.

Destroy them. Apologies to mayor pro tem Caraway, but this is a viable option. Sure, the Lee statue is indeed an expensive piece of art, a commissioned sculpture that was unveiled by President Franklin D. Roosevelt. It does actually have some serious monetary and historical value. But, even so, if the City of Dallas wants to send a message that it wants to stand by people of color in Dallas, destroying these monuments is indeed within the realm of possibility.

Banish them to “The Boneyard.” Here’s a fun fact: The City of Dallas already has a building in East Dallas where it puts its old architectural relics that it deems too worthwhile to just toss out in the trash. It’s colloquially known as “The Boneyard,” and, unless they are indeed destroyed or auctioned off, this is almost certainly where the statues are headed off to be forgotten about.