What You Need To Know About Early Voting At The AAC.

Voting At The American Airlines Center Is Fast And Socially Distant, With Hand Sanitizer Everywhere. Plus, Parking Is Free And You Get A Cool Mavs Button!

It’s Day One of early voting for the 2020 General Election here in Texas — and, in Dallas County in particular, registered voters can head to any of 61 early voting polling locations within county limits to cast their vote between now and October 30. (The same is true of Election Day itself on November 3.)

Already, we’re seeing reports of high voter turnout across the county, with word of hundreds lining up at various locations before polls even opened at 7 a.m.

But what of Dallas’ largest — and newest — polling location? Well, that distinction belongs to the American Airlines Center, which is normally home to your Dallas Mavericks and Dallas Stars, and has opened its gates this year to the voting public as part of an NBA initiative meant to help get out the vote.

This morning, we cast our own ballots at the arena to see what the experience of voting where we normally drunkenly cheer on our favorite locals sports teams was like.

Here’s what we learned.

The line to vote is found at the northeast corner of the arena. The line forms outside of the Eighteen76 Club. After checking in there, voters are ushered into concourse of the venue, where they can cast their ballots at any of the dozens of booth lining the halls. After voting, voters exit along Houston Street on the east side of the venue.

Parking is free. Beyond the various nearby DART stops available to public transit users, voters who drive to the AAC to cast their ballots can park for free inside the Lexus Garage, which is located directly across from the voting line. This morning, we spotted one Dallas Police officer on hand to direct traffic. 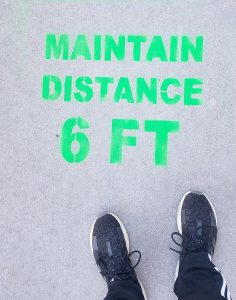 Social distancing is enforced. Outside of the arena entrance, a snaking queue is marked by stencils reminding people to maintain social distancing from one another as they await entering the building. Inside the venue, green tape is used for this same purpose.

There’s plenty of hand sanitizer to be had throughout the space. From the entrance through the exit, we counted no fewer than three hand sanitizing stations for voter use.

Everyone was masked up. While Texas Gov. Greg Abbott has said masks are not required at polling places this election, everyone we encountered at the AAC this morning was wearing one.

There are plenty of workers on hand to help you out. Polling judges who check voters in and hand them their ballots are seated behind plexiglass screen guards. They also provide voters with a stylus to use on the voting machines as part of an effort to keep touching shared surfaces at a minimum.

The whole experience is a pretty quick one! Whereas we’ve heard of lines at other locations around the county taking as long three hours to finish, our experience at the AAC was a pleasantly speedy one. Using the stopwatch feature on our phone, we clocked the time from getting in line to leaving the arena at 15 minutes and 23.08 seconds. Granted, some voters we spoke with who voted here today waited longer; one friend told us his experience at the arena last two hours and 45 minutes due to delays involving voting machines going offline. Still others we spoke with reported times of six minutes, 20 minutes, 30 minutes and an hour. So, yes, your experience may vary. But with dozens of booths inside the venue, the line seemed to always be moving at a pretty solid clip at large. (Pro tip: While the feature doesn’t apply to every polling location in Dallas County, this nifty dashboard provides real-time estimates on wait times at various voting spots within county limits, including the AAC.)

On your way out, you get a cool, limited edition Dallas Mavericks-branded “I Voted!” button. While we didn’t see any of the “I voted in Dallas County!” stickers that most locations traditionally (but don’t always) offer, others we know who voted at the AAC today received both a sticker and a button. The button alone is some pretty sick swag, though.

Voting here just feels cool. Voting in general is a pretty rad experience, but there really is something neat about doing it at the AAC. Call us corny for thinking so, but today’s experience definitely elevated the already fulfilling task of doing one’s civic duty. 10/10. Highly recommended. Would vote at AAC again if it remains open as a polling location in future elections.

You can score some Mavs and Stars merch after you vote. Looking to snag some Western Conference Champions swag to celebrate Your Dallas Stars’ wonderful Stanley Cup run this year? The AAC’s merch store The Hangar is open, so feel free.

This website here provides any additional information you may need. The big takeaway is that the AAC is opening for voting from 7 a.m. to 7 p.m. on Mondays through Saturdays, and from 1 p.m. to 6 p.m. on Sundays.

So get out there and cast your vote, OK?