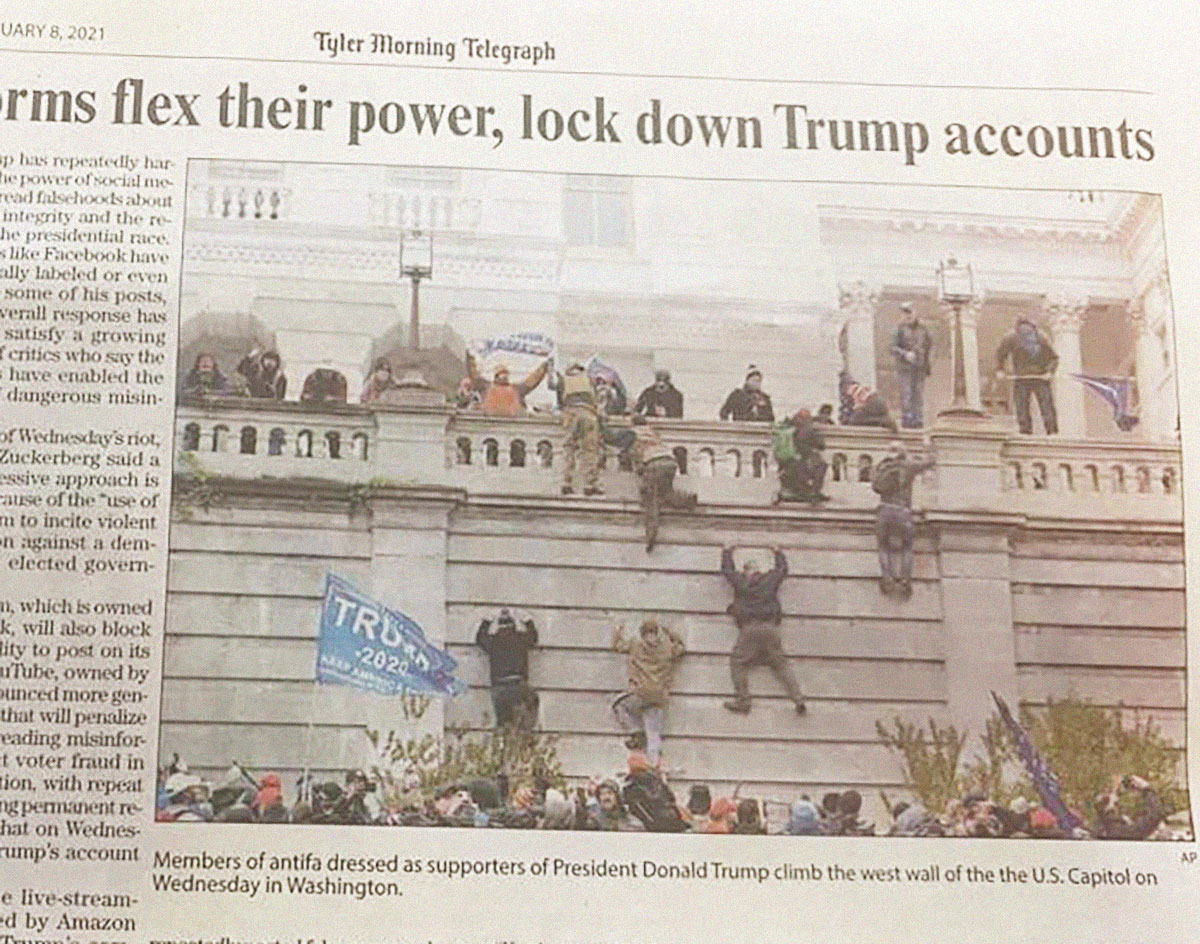 The Tyler Morning Telegraph has come under fire for a photo caption it printed this morning within its coverage of Wednesday’s riotous storming of the U.S. Capitol in Washington, D.C.

Underneath an Associated Press photo, the only daily newspaper in the East Texas city of Tyler identified the insurrectionists seen scaling the walls of the Capitol as “[m]embers of antifa dressed as supporters of President Donald Trump” in a Friday morning cutline. This messaging parrots a baseless conspiratorial deflection of what authorities say happened in D.C. on Wednesday.

Photo evidence of the Morning Telegraph‘s printed caption — which was definitely not the same as the caption provided along with the image by the AP itself — started going viral on social media early Friday afternoon.

Hey @Tylerpaper you might want to check your photo captions.

Pressured to respond, Morning Telegraph editor John Anderson tweeted that he was aware that the cutline was not “correct” and said the change “was not done by editorial staff.”

It was not done by editorial staff. That is not the correct cutline and we are addressing it.

A few hours later, the Tyler newspaper itself released the following statement on the caption’s wording: “The Tyler Morning Telegraph is aware of an incorrect cutline on an Associated Press photo in our print edition on Jan. 8, 2021 on page A8 where we incorrectly identified protesters as members of Antifa. This was inserted by one person and does not represent the views or options of the Tyler Morning Telegraph. The error has been corrected in every place that we can correct it and we will run a correction in print.”

The statement neither uses the words “regret” or “sorry,” nor does it indicate if the person who inserted the changes faces any repercussions for their actions.

Founded in 1877 originally as a weekly publication called The Courier, the Morning Telegraph eventually morphed into a daily newspaper operation owned by a single family for 108 years — until 2018, when it was purchased by M. Roberts Media, a media group that also owns a number of other smaller Texas newspapers, including the Longview News-Journal, the Marshall News Messenger, the Panola Watchman and the Victoria Advocate.

The Morning Telegraph currently boasts a printed circulation of less than 30,000, but is both colloquially and in the publication’s own branding known as “the Tyler paper.” It serves a readership that famously lives “behind the pine curtain” in a region still rife with racial injustices.

Tyler is located less than a two-hour drive east of Dallas along I-20. It is represented in the U.S. House of Representatives by Republication Congressman Louie Gohmert. Along with U.S. Senator Ted Cruz, Gohmert led the charge of 17 Texas conservatives who continued objecting to the presidential election’s certification even after Wednesday’s violence.

Early in the morning on Thursday, Gohmert offered the effort’s final objection to Vice President Mike Pence. Without any support in the Senate, the Congressman’s motion was denied.

Five people are now confirmed to have died as a result of Wednesday’s insurrection at the U.S. Capitol.