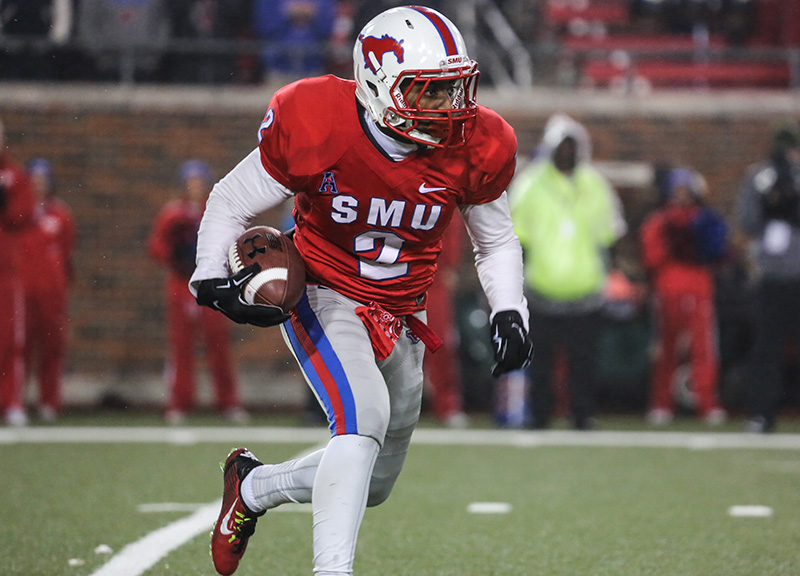 After SMU's 13-14 Loss To South Florida, A Winless Season Suddenly Seems Like A Possibility.

Everything seemed to be going so well for the Southern Methodist University Mustangs on Saturday night. Well, for a while there, at least.

No, it wasn't pretty — like at all — but, still, the Mustangs held a 13-0 lead over the University of South Florida Bulls at the end of the first half. And, for the winless Ponies, this was an exciting prospect. Better yet, that same score stood until the end of the third quarter, too.

Then, in the fourth quarter, the Bulls made a switch at quarterback, replacing freshman Quinto Flowers with sophomore Mike White, who'd started the season off as the team's starter and, on this night, made the case for more playing time. White entered the game halfway through the fourth quarter and swiftly led his team to two touchdowns with his only two drives at the helm of the Bulls' offense. His second and go-ahead drive was a 21-play effort that went for 75 yards that lasted 6:02, during which USF converted three fourth-down attempts and left just four seconds on the clock for the Mustangs at the end of the game.

“We've gotta learn to finish,” SMU coach Tom Mason, who in September took over the gig from June Jones on an interim basis, said after the loss. “We had that game. There's no reason to lose that ball game.”

And yet the team found a way, leaving an obvious, if difficult question on the table: With just three games remaining on the schedule, is this 0-9 team destined to go 0-12 on the season?

It's a possibility, for sure. The Mustangs' next two games are against the University of Central Florida (a 6-3 team currently third place in SMU's American Athletic Conference) and Houston (a 5-4 team currently fifth in the conference), and wins against these two teams would seem to be tall tasks. The greatest chance this team — the only winless team in the NCAA's Football Bowl Subdivision — will have at a victory will be in its final game on the year, against the University of Connecticut, a team that is currently 2-7 on the season. Unfortunately, SMU will be forced to place that one in Huskies territory.

Still, there are glimmers of hope that seem to indicate that a win could be on the horizon for this team. In its past two games, SMU has shown some significant improvements. Against Tulsa last week, SMU had its best offensive outing of the season, producing four touchdowns and 464 yards with new starting quarterback Matt Davis leading the offense. Davis, a sophomore, hasn't been the only change on offensive side of the ball, either; junior running back K.C. Nlemchi and sophomore wide receiver Deion Sanders, Jr. who led the team with seven catches for 57 yards this week against USF in his first start of the season, have also earned more snaps. This week, Sanders Jr. also reprised his role as kick returner and opened the game with a 53-yard return.

“I thought the kid's always been explosive and a good football player,” Mason said of Sanders Jr.'s performance on Saturday. “I was just happy for him. He made some really good plays, and he made smart decisions.”

To be sure, it's small victories like those that the Mustangs must hang their hats upon for now, while taking comfort in the fact that these efforts have put team in better positions to win games. Still: The defense has continued to struggle, and injuries in the secondary and at linebacker are wearing the defense thin. And, even as Saturday night looked like a sure win for the Mustangs for a time as they controlled the game for three and a half quarters, those factors eventually played roles too large to overcome.

“The football gods just aren't with us right now,” Mason said, summing up his perspective on the night's loss. “Somebody's gotta make a play. Somebody's gotta step up. We gotta drive the ball. Somebody’s gotta get the first down. [But] however you look at it, we didn't get it done.”

SMU defensive back Hayden Greenbauer (22) stops USF running back Darius Tice (31) in his tracks. Greenbauer finished is the Mustangs’ leading tackler on the season with 63.

SMU defensive back Horace Richardson (9) celebrates a fourth down stop by the Mustangs defense.

SMU quarterback Matt Davis rushes down the field against USF.

SMU defensive end Justin Lawler (99) celebrates his touchdown catch in the first half. The Mustangs led the Bulls 13-0 at the half.

SMU running back K.C. Nlemchi (25) dives for a first down.

SMU running back Prescott Line (42) rushes down the field against the USF defense. The 10-yard run was Line’s longest run of the game.

SMU wide receiver Der’rikk Thompson (7) fights to breakaway from a USF defender during a punt return.

USF running back D’Ernest Johnson (32) heads toward the end zone in the fourth quarter.

USF running back D’Ernest Johnson (32) falls into the end zone for the Bulls’ first touchdown of the game.

USF backup quarterback Mike White (14) scrambles down the field. White entered the game in the fourth quarter and led the Bulls to two scoring drives.

SMU linebacker Caleb Tuiaosopo (2) watches the replay of USF’s go ahead touchdown in the final seconds of the game.

SMU linebacker Jonathan Yenga (1) walks off the field at Ford Stadium after the Mustangs’ 13-14 loss to the USF Bulls. 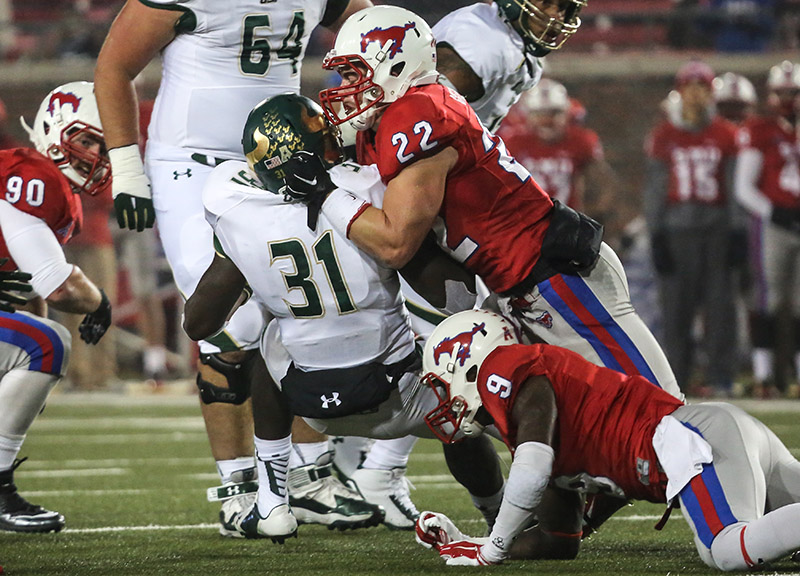 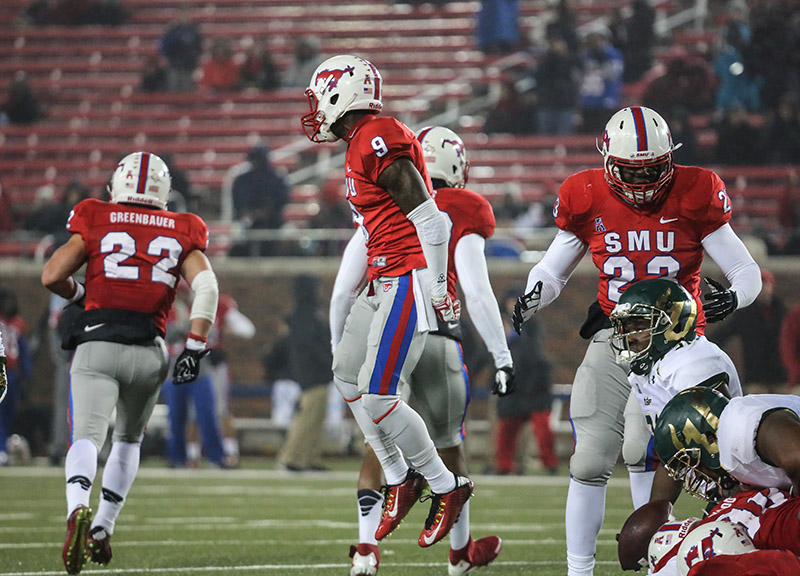 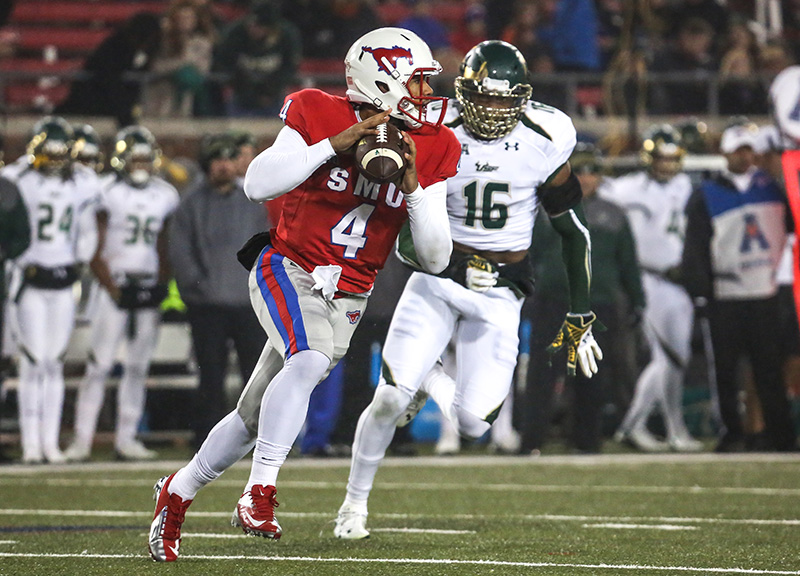 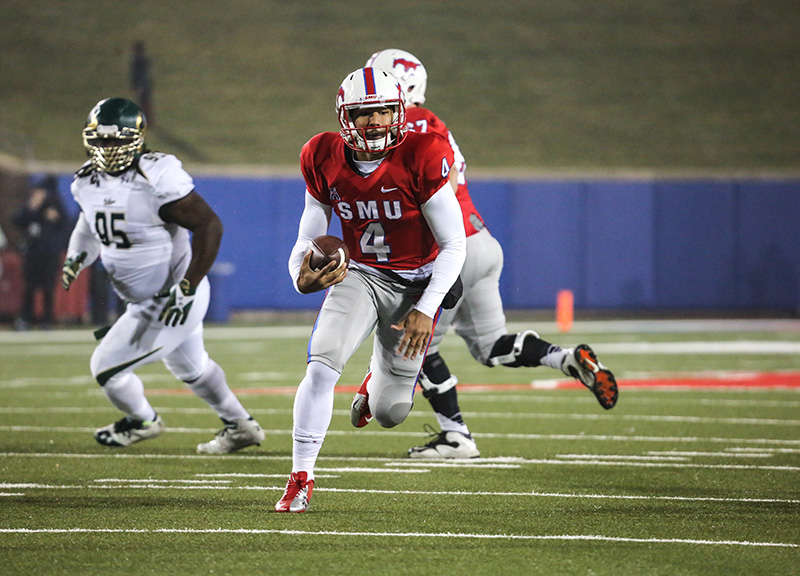 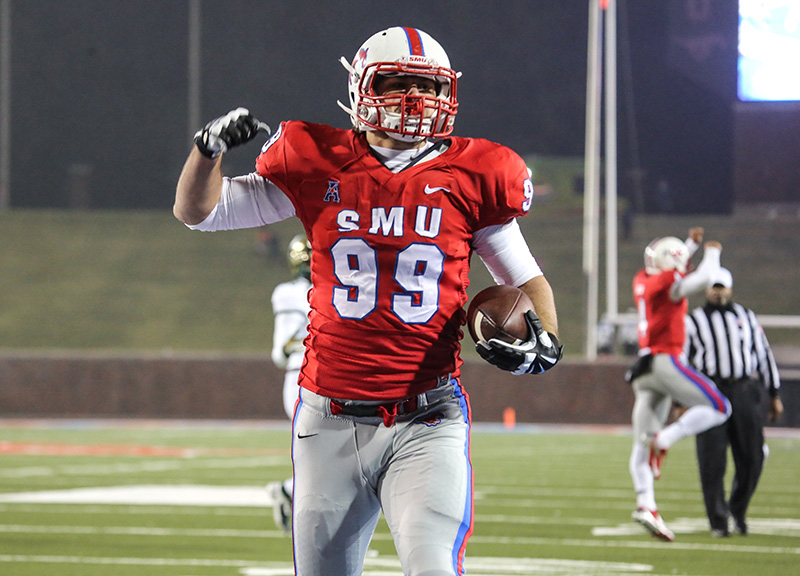 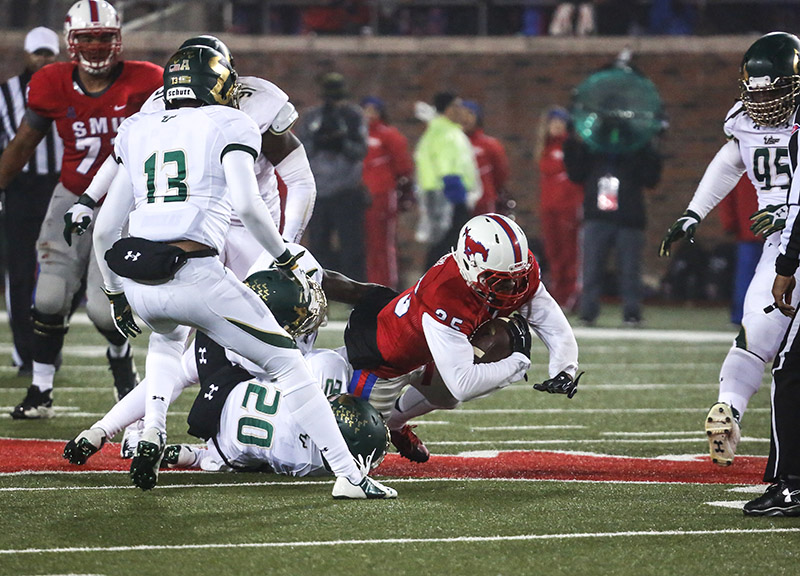 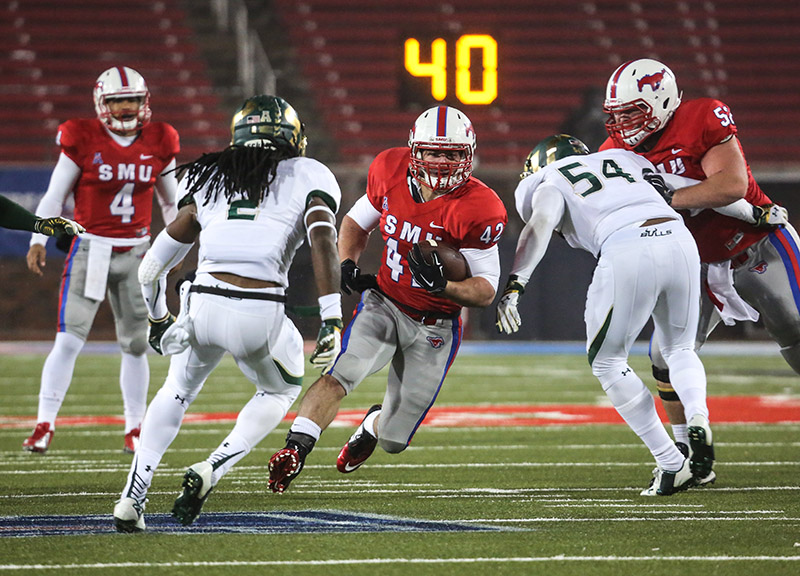 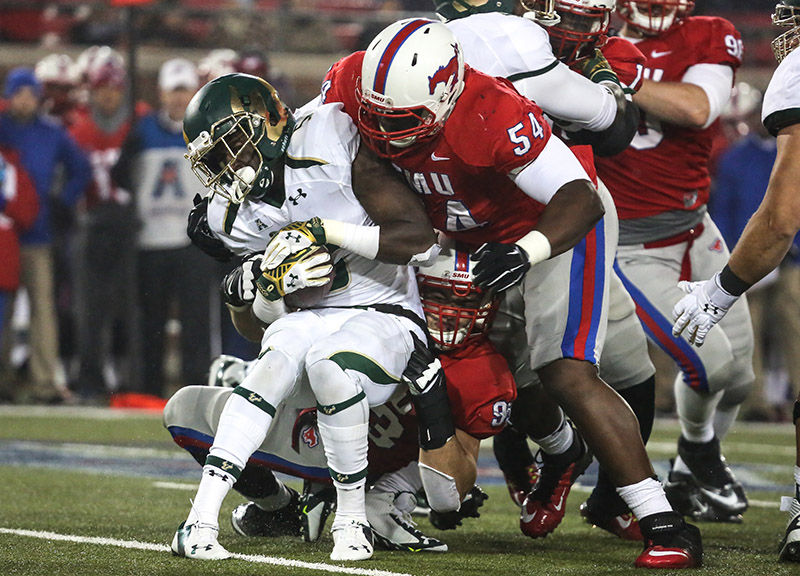 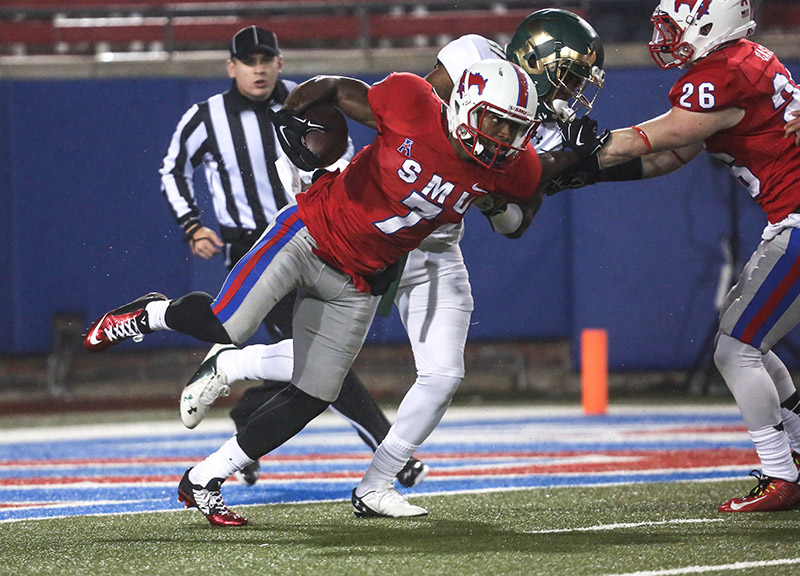 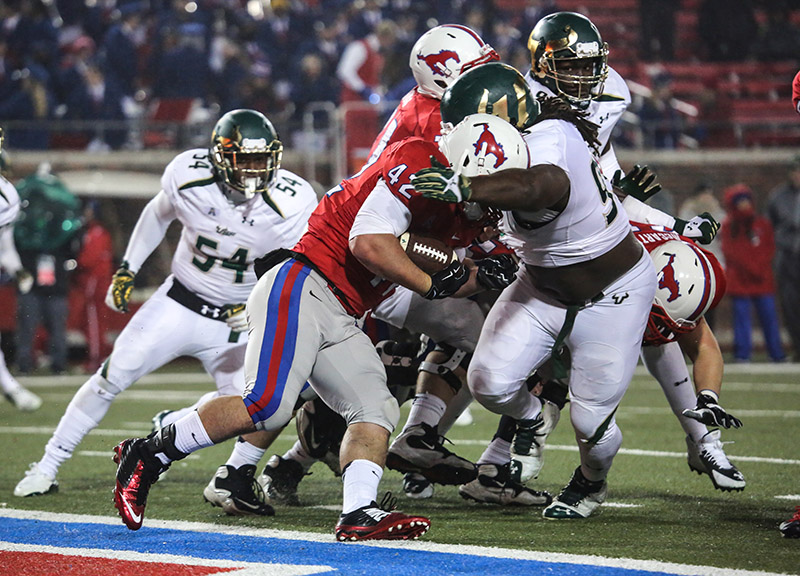 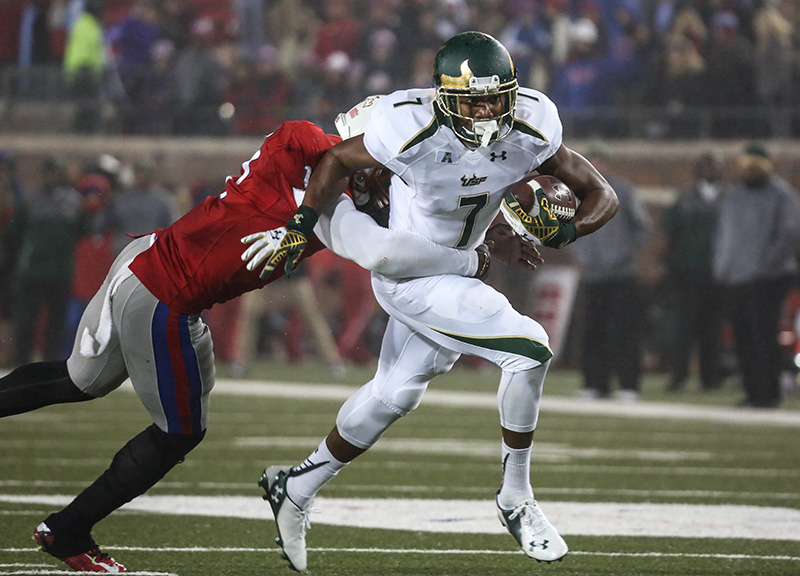 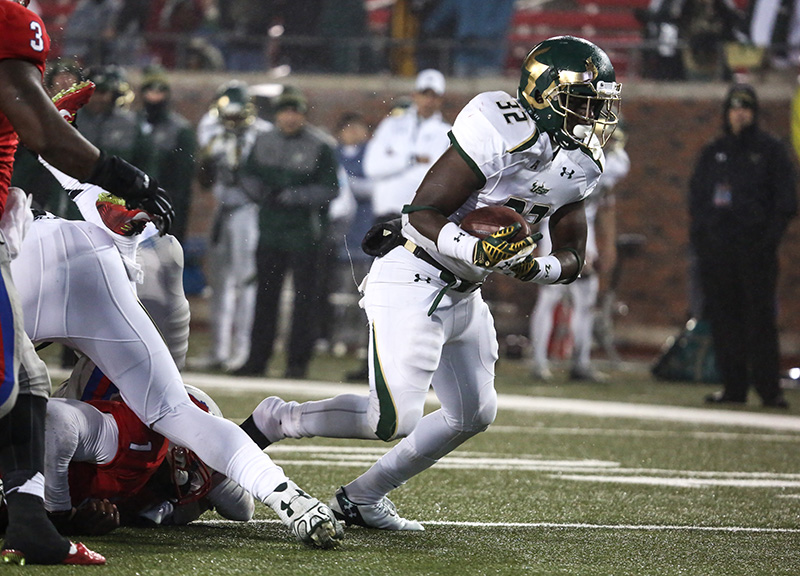 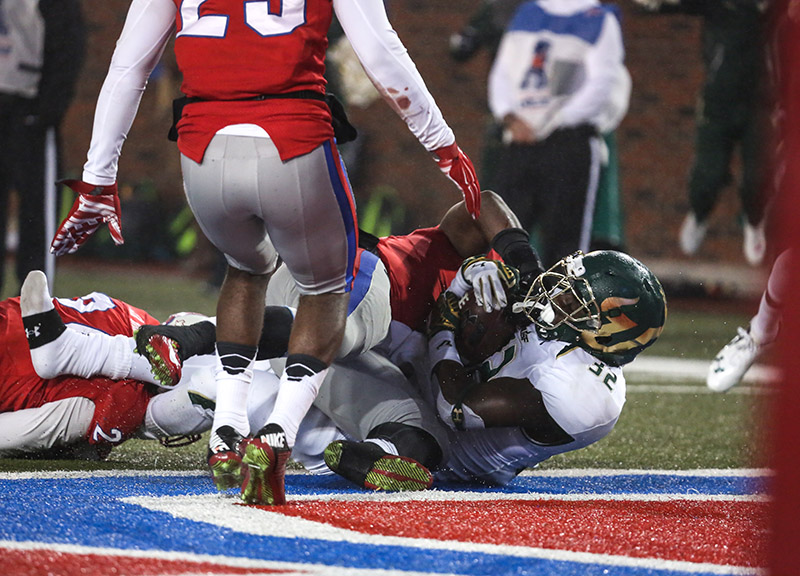 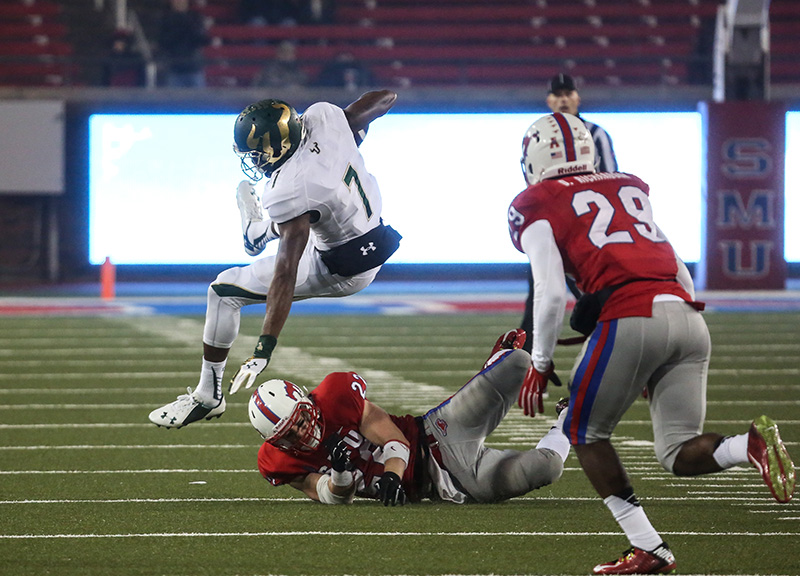 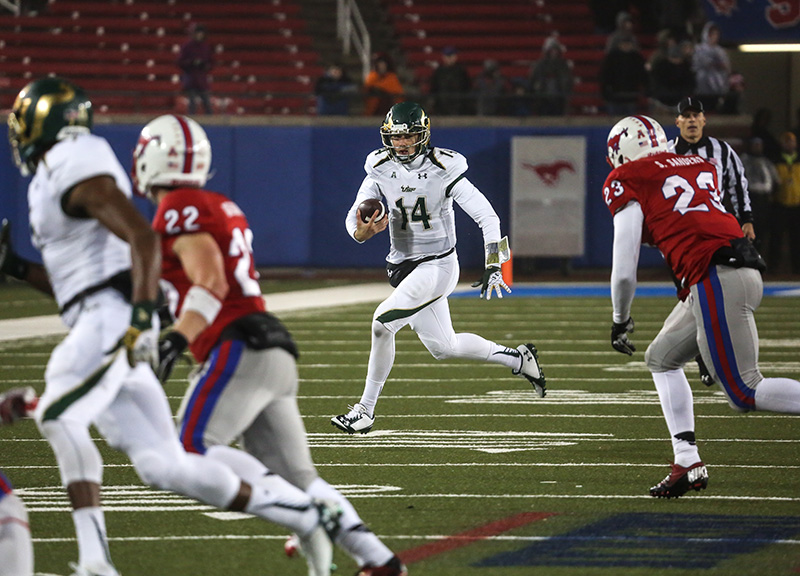 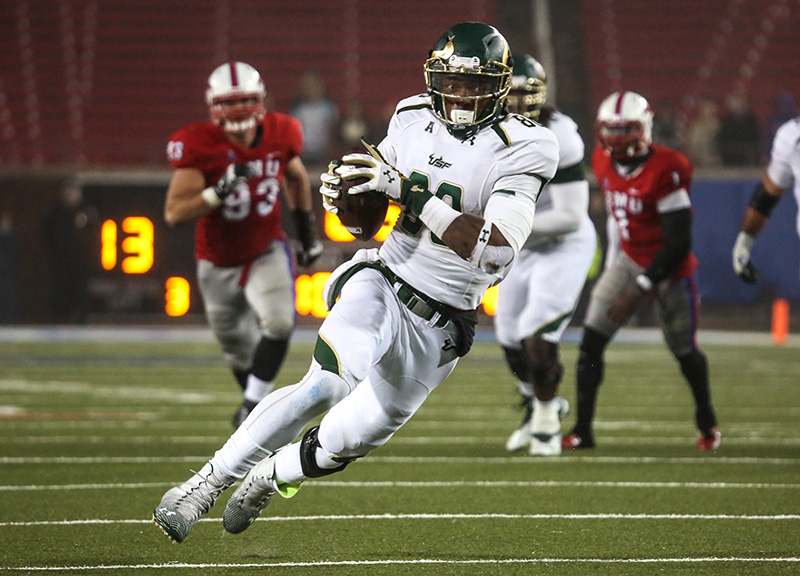 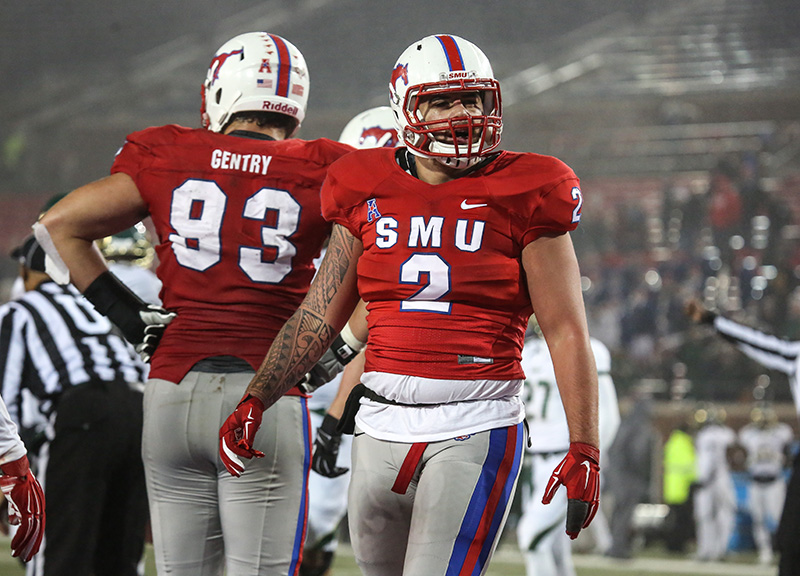 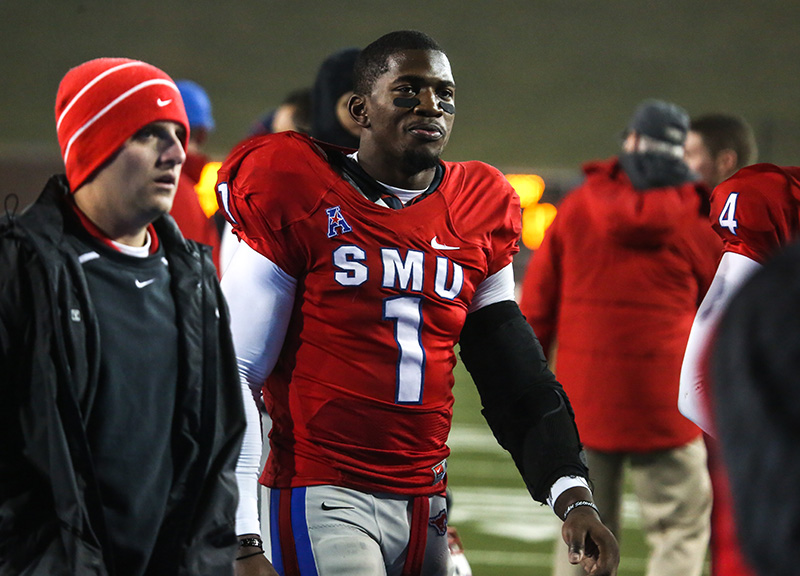