Tony Romo Is Leaving The Cowboys For CBS. 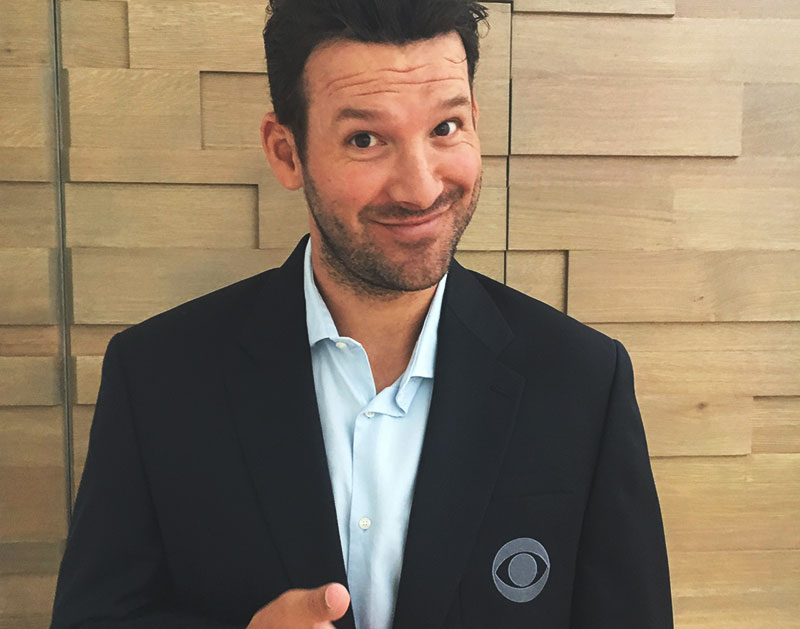 Well, we finally know what the future holds for one Antonio Ramiro Romo — either the third- or fourth-best quarterback in Dallas Cowboys history, depending on whom you ask. After being officially released earlier today by the Cowboys, the 36-year-old all-time Cowboys leader in career passing yards and touchdowns thrown has agreed to join the sports broadcasting arm of CBS, where he’ll immediately join play-by-play announcer Jim Nantz as the color analyst on the network’s top football-calling team, replacing Phil Simms in the booth, who has helmed that post since 1998.

A CBS press conference scheduled for later today will make the news formal, but statements from the Cowboys and from CBS all confirm the news, as do reports from various NFL insiders. And, well, the below tweet sent out by Romo himself also does the trick, acting essentially as the final touch on the Cowboys’ Romo-to-Dak-Prescott transition at QB1.

I guess it’s time to start dressing up. #CBS pic.twitter.com/GseSRiyNOo

For Romo fans who perhaps selfishly feared that the ever-talented but oft-injured Romo might find late-playing-career in a uniform not colored silver and blue, it’s welcome — even exciting — news. But some in the broadcast media ranks — including a former member of CBS’ top NFL broadcasting team — are less than enthused by this announcement, which immediately thrusts a no-experience ex-player into the most prominent analyst role on CBS.

Former CBS broadcaster Bonnie Bernstein, who worked as a sideline reporter for CBS from 1998 to 2006 and spent her last three years with the station working as part of the Nantz and Simms, called Romo’s hire “total crap” in a series of tweets posted on the matter this afternoon.

No offense. But that’s total crap.

Romo/2 A network’s #1 NFL analyst is one of the most coveted positions in all of sports broadcasting. For those of u who think…

Romo/3 “All they do is talk,” *live* broadcasting so much harder than you realize! Try, on the fly, sharing cohesive thoughts in 10-15 secs.

But I’ve worked on that crew. And I know how tough that gig is. That’s all.

Berstein’s point is a fair one. For all of Romo’s charisma and charms that have long been displayed in press conference settings and in on-air interviews on local radio and television stations, the guy is completely green when it comes to broadcasting. He’ll no doubt have help and coaching along the way, and CBS is likely committed to grooming him into a long-time player in this role just like the snore-inducing Simms was before him, but it’s at least a little interesting that CBS is making Romo its top dog from the jump without holding his feet to the fire in a lesser role with less pressure for maybe a year or two.

If nothing else, Bernstein and other industry vets will no doubt be holding Romo to a higher-than-usual standard as a result of this development. That’s a tough position to be in.

Good thing is, if Romo needs any help, you gotta figure he can just check in with another star ex-Cowboys QB who sits in the top booth of a NFL-broadcasting network, one Troy Aikman. After all, with this development, former Cowboys QBs are now the top color analysts on the two biggest NFL-carrying stations.

And, hey, ain’t that something.