Three Questions About The Dallas Mavericks’ Return To Action. 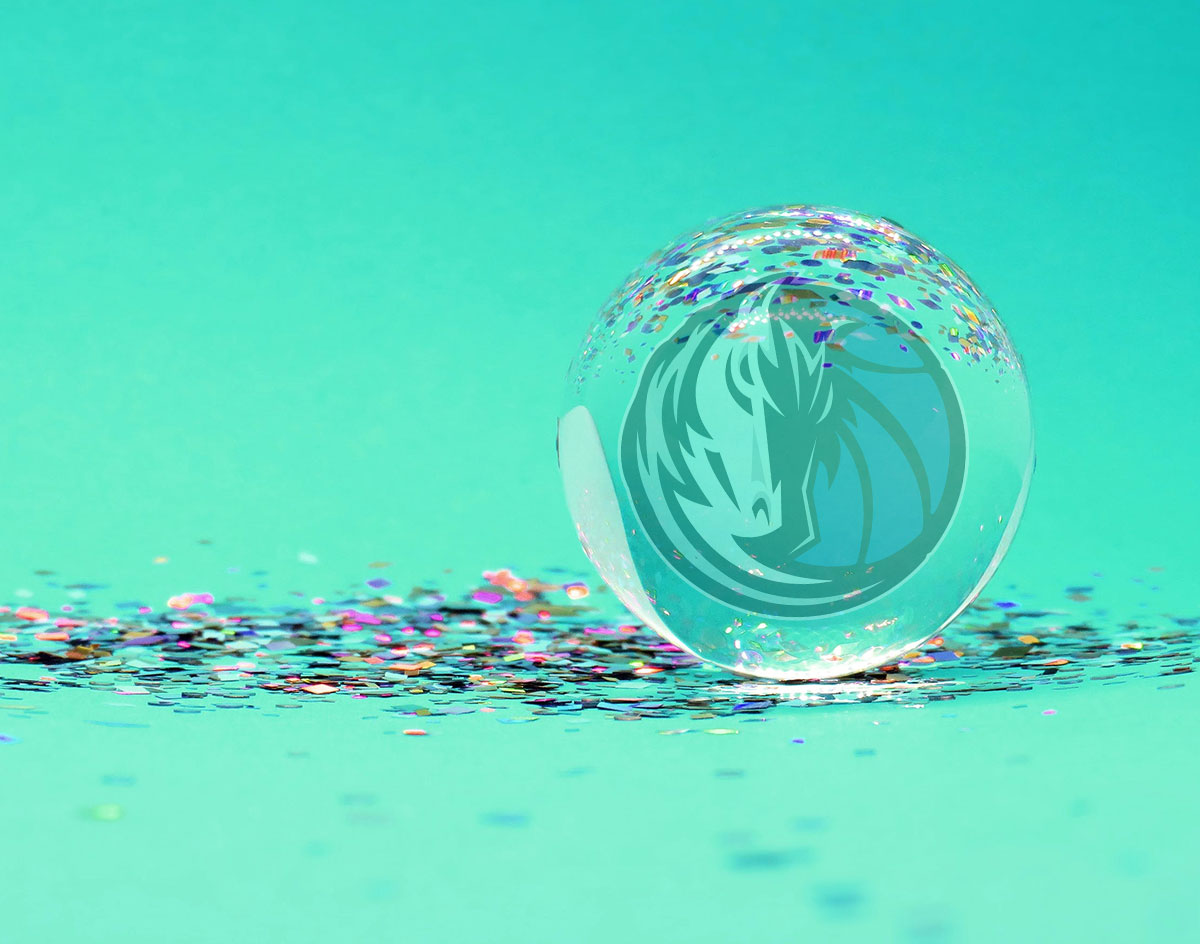 The NBA Is Back, And While The Bubble Won’t Quite Work Like The League We Saw Before The Pandemic, Could That Be A Good Thing For Luka & The Mavs?

Remember Hubba Bubba Max? That giant piece of fruity sugary dense gum? The first bite always exploded with flavor. Then, very quickly, it would lose its taste and turn into a lump of gritty rubber in your mouth.

Well, the NBA is now on the verge of coming back — to the Max, in a very Hubba Bubba way. And whether that’s a good thing or a bad thing is something that, well, we should be able to determine very soon.

Considering that the Dallas Mavericks played the last game of the real NBA Regular Season before the league-wide shutdown on March 11, 2020 — nearly 25 years ago (give or take) — MFFLs have technically waited less time than other fanbases for their team to return to action. Still, Mavs fans will have waited a full 142 days between consequential games by the time the team returns to regular-season play on Friday, July 31, from the comfort of Disney World, where the league as been sequestered into a bubble of all its own.

In the coming days and weeks, the NBA will explode with games and highlights and NBA Bubble Life content. With some luck, this bubble won’t burst of lose any flavor. But there’s a chance it could blow up in everyone’s face.

With official action on the verge of returning, let’s consider three big questions surrounding the NBA’s restart, the NBA Bubble and, of course, Your Dallas Mavericks.

1. Should The NBA Be Coming Back At All?

This is a question I wrestled with for weeks on end.

My full-time job is creating NBA (and NBA-adjacent) content. Personally, I have a lot riding on this season restart — but not my life.

I’ll be home sitting in front of a screen, trying to enjoy every minute of basketball on display. The players, coaches, staff members and hundreds of other league employees will be risking their safety, and potentially the health of their loved ones, just to finish a season and hoist a gold basketball hoop trophy.

So far, everything has gone according to the NBA’s massive Health & Safety Plan. In fact, the NBA’s second round of league-wide coronavirus testing results came back 100 percent negative, which is a pretty incredible feat in and of itself. To date, the Bubble is holding just as the powers that be had hoped.

But, as Texans know, this virus doesn’t follow any plans. It’s a sneaky S.O.B. Until there’s a vaccine, there will always be some amount of risk involved. Minnesota Timberwolves big man Karl-Anthony Towns, for instance, lost his mother to the virus back in April — and even just a single life is too many to risk.

So: The honest-to-goodness answer here is that, no, NBA probably shouldn’t come back.

But the NBA’s top brass and its players association all green-lit plans for a return. There is, after all, a lot of money at stake for all parties involved — myself included.

They assessed the risk and made that choice, and so far it appears to be paying off. Yes, there’s always going to be a strain of doubt and anxiety about the restart in the pit of my stomach until the coronavirus is beaten.

But, as long as there’s basketball and immense safety measures in place — seriously, go listen to Mavs coach Rick Carlisle detail those procedures at the 28:30 minute mark here; it’s wild the lengths the league is going to in order to keep everyone in the bubble safe — Ill allow myself to be excited the NBA is back.

2. Does The NBA Restart Actually Work In The Mavs’ Favor?

In the buildup to the restart, Mavs players have pretty much uniformly said the current situation they find themselves in feels more like a preseason than the mid-season resumption it really is.

That much makes sense; this abbreviated season and restart is something that no one in the league has ever seen or experienced before.

The closest the league has come to something like this is its 1947-48 season, the shortest NBA season on record. That year, the league’s eight teams played 48 games each — and four of those teams eventually folded by season’s end.

More recent examples can be seen the 1998 and 2011 lockets, during which teams played 50 and 66 games each respective season.

This time around, each team will play three exhibition scrimmages, then eight games to determine playoff seedings. The playoffs will kick off immediately thereafter.

Trying to compare any prior season to this one is like having a real architect explain how Minecraft works. They’re kind of similar concepts, but not really.

Fortunately, the Mavericks have a few things going for them that could become advantages once consequential play begins.

For one thing, the Mavs only have two players over 30 years old in their expected 10-man rotation — the 35-year-old J.J. Barea and the 31-year-old Boban Marjanovic. Otherwise, the roster is filled with fresh, young legs that just rested for four straight months. Those of us of a certain age know how much easier it was to boot and rally when we were younger than it is in our advanced years.

It also will likely be of benefit that the Mavs’ strategies are centered around a single ball-dominant player in Luka Doncic. Dallas’ offensive system is fairly easy, actually: Luka dribbles ball, Luka shoots ball or Luka passes the ball to another player who shoots ball. The intricacies and timing of his decision-making is what makes Doncic’s  mastery of the game so enticing — but, on the surface, it’s all quite simple. That simplicity should be easy for the team to pick back up and run with during this restart, giving the Mavs an advantage over clubs with more team-oriented offensive systems, like the Jazz, Nuggets and Thunder.

On that same note, this Mavs team knows who they are. During a recent media Zoom session, Mavs guard Tim Hardaway Jr. was asked what he thinks about being the this option on this team’s offense, and his answer was pretty awesome: “I’m just trying to do whatever I can to make two guys on our team’s life as easy as possible out there on the floor in KP and Luka. At this point I just want to win.” (He also went on to give hsi fellow backcourt player Seth Curry credit for the “amazing job” he’s done this season.)

In his own Zoom session with the media, Barea also gave Doncic some high praise: “Any time you have one of the best players in the NBA at 21 years old as your best player, he’s only going to get better, and that is a crazy thing to say.”

This Mavericks team has a clear hierarchy. Luka Doncic is the best player and No. 1 option, Kristaps Porzingis is his running mate, and the team’s No. 2 option. Everyone else’s role is to make Doncic and Porzingis’ jobs easier.

Once again, that simplicity and the clear definition of roles should help the Mavs stay unified throughout the restart, and give their squad an advantage over competition with more complicated systems in place.

3. Why Are Injured Mavs Players Dwight Powell And Courtney Lee In The Bubble At All?

Bringing the NBA and all the players back to play basketball is one thing. But bringing a player into the NBA Bubble to not play at all just seems like an unnecessary risk, no?

One of the weirder aspects of the NBA’s return is that the Mavericks have done just that, bringing injured players Dwight Powell and Courtney Lee with them to Orlando, even though neither are expected to play at all during the shortened season’s return. No, really: Carlisle has gone out of his way to definitively say that neither player will see any on-court time in the bubble, no matter the circumstances, given that Powell is still recovering from a torn Achilles that he suffered back in the normal season and given that Lee hurt his calf during the hiatus from action.

So why bother bringing these two along? Seems morale is mostly the answer here.

Lee is frequently mentioned as a mentor and favorite veteran among Mavs players — specifically by Doncic. It’s also worth noting that Barea and Lee are the only two Mavs who have been an NBA Finals, and their playoff experience, which the rest of this team sorely lacks, could prove valuable down the line.

Powell, on the other hand, doesn’t have as much playoff experience as Lee. But he’s also known as a great locker room presence and team bonding agent. It should also be said that he was the mastermind behind the Mavs’ smash viral DJ Quarantine video.

In a Zoom session, Carlisle mentioned that “[Powell] is able to do everything needed for his rehab here [in Orlando],” whereas his injured teammate Jalen Brunson was better suited staying back in Dallas to continue rehabbing his injured shoulder.

Powell, for his part, says he’s on board with that: “[Bubble rehab] is actually probably better in a lot of ways. There’s no distractions. It’s a very regimented schedule for me anyways. So it’s easier for me to adhere to that in this environment.”

Another interesting wrinkle, courtesy of Carlisle: “[Powell’s] very involved with the Player’s Association… A lot of the planning that went into everything here in Orlando and Disney, he was directly involved in. He still remains an important conduit between he players and the league on those levels as well.”

That’s a fair point. Powell is, indeed, the Mavericks’ official Players Association representative, and he was mentioned as one of the players on the NBPA group that was working to help with restart plans back in May.

So, no, neither Powell nor Lee will play in the restart. But they’re still part of the team, and they bring their own value off the court in various ways.

With the restart now looming, their off-court contributions for the Mavs will be seen sooner than later. Presuming, of course, the bubble doesn’t burst, and retains its flavor in ways Hubba Bubba Max never could.