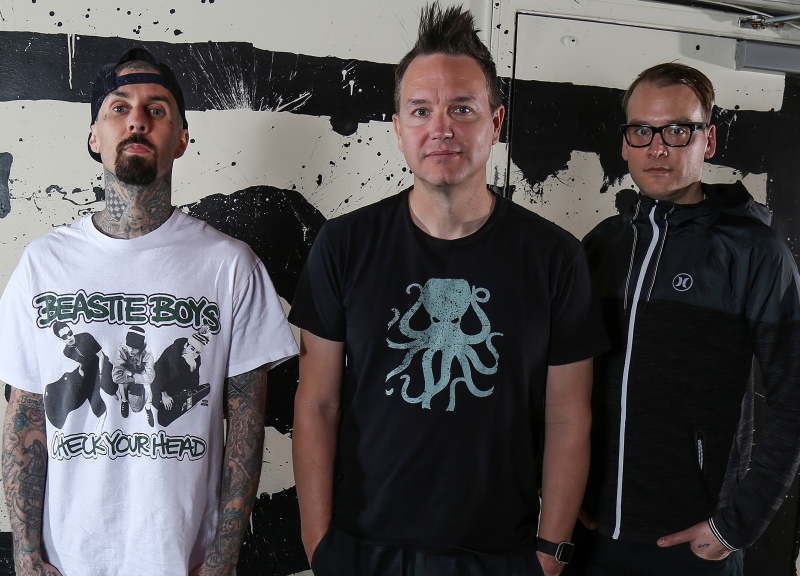 Take Off Your Pants And Jacket.

With age comes wisdom. And in the cases of cheese and wine, improved quality and taste. So this 340-year-old cheese that was recently discovered in an old Korean shipwreck must be, like, the greatest cheese of all time.

Or it could be hella-gross. There's only one way to find out — ask the brave soul that dares to take the first bite.

Some things aren't up for debate. Take, for instance, whether or not this weekend is going to be awesome. It is. Period. Just look below, it's got all the makings. Don't be afraid to take a bite. — Cory Graves

Friday
Blink-182 at Gexa Energy Pavilion
It's really not the same without Tom, but he's moved onto greener pastures. If you grew up adoring Blink and its fun, oftentimes stupid, style of pop-punk, then the chance to see two-thirds of the outfit is really all the convincing you need. Also their new album is really good. Also, All-American Rejects and A Day to Remember will be there. — Calvin Cashen

Bar Politics: “WTF Is a Better Block?” at 700 W Davis
At this month's edition of Dallas' live answer to The Daily Show, host Josh Kumler and Co. will try to figure out just what the fuck does make a better block. The answer, in part, is crepes. — CG

Denton Comedy Fest Day 1 at J&J's Pizza
J&J's is the pizza plug in Denton, if you didn't already know. They will host a comedy fest with local and national comedians down in their basement this weekend to make you laugh till you accidentally spit those remnants of that slice on the back of that ladies head in front of you. Please don't do that. — Sidney Johnson

Edwin McCain at Granada Theater
Longtime friend of Hootie and the Blowfish — and performer of your mom's favorite song of 1998 — Edwin McCain, brings his notorious indie rock acoustic guitar stylings to the Granada. Check it out, and maybe take your mom as a way of saying thanks for being such a big “fan of your life” all these years. — Nicole Arnold

A Flock of Seagulls at Gas Monkey Bar N' Grill
Since we haven't invented time travel yet but you're looking to get back to the times of neon colors and big, crispy hair, the Flock is here to transport you back to the '80s. And you'll run. You'll run so far away. — SJ

The Cush, Joe Gorgeous at The Foundry (Free)
Texas psychedelic-indie rockers The Cush will be playing with “Mr. Gorgeous” for a show geared to shift vibes from 0 to 100, real quick. Try the fried chicken. — SJ

Cinderblock Sessions: Northern National at Shipping and Receiving
Still working to get its parking situation squared away, and the City of Dallas off their backs, the Cinderblock folks opted to move this session beyond city limits. And to an actual live music venue. That's one way to avoid a ticket — or, two, actually. — CG

CinéWilde Presents: To Wong Foo, Thanks for Everything! Julie Newmar at Texas Theatre
Texas Theatre regular, Cinewilde brings back the 1995 classic for its usual “queertastic” film screenings. Swayze, Leguizamo and Snipes in drag? One of the greats for sure. — SJ

Different Strokes at Twilite Lounge (Free)
Dallas' first and only Strokes tribute band, features members of Party Static, Birds of Night and Vandoliers, among others. Catch them for free this weekend, just know there's a strict dress code that must be adhered to: Leather jackets, Chuck Taylors and sunglasses, which must be worn indoors only. — CC

Thyroids, Matthew J & Dray at Aqua Lab
If the thought of Mark Hoppus singing about being 23 is a little too prissy for your tastes, I certainly won't put it against you. I mean, he's 44 and he still spikes his hair. If a band name like Thyroids is piques your interest, check out its tour kick-off show, by all means. — CC

Jill Scott at WinStar World Casino
The R&B goddess is just a hop, skip and jump away in our neighbors backyard. We love you Jill. You're totes worth the drive up I-35. — SJ

Saturday
An Evening With Al Pacino at WinStar World Casino
Big Al is coming through. Not Al Boenker from those cheesy mid-day commercials, the Al we all know. You can also get a 20 percent discount on tickets using the promo code “Serpico.” How original! — SJ

Rascal Flatts at Gexa Energy Pavilion
Known for making soccer moms and country darlings swoon since 1999, comes Rascal Flatts and the hits they're so known for. So expect chants of “Life Is A Highway” or “My Wish” almost endless from none other than your mom. — Evan Henry

Upright Citizens Brigade at Dallas City Performance Hall
There's nothing quite as exciting as not knowing exactly what to expect. Be prepared to expect the unexpected at this insano improv comedy show, which will spotlight a plethora of rising stars and a fair share of familiar names. — CC

Deep Ellum Lit Hop at Deep Vellum Books
Stroll Deep Ellum with other literary enthusiasts, hitting spots Deep Vellum, Drugstore Cowboy and others for a quick gander through their collection of books, writings, art, spoken word performances, readings and a zine make-and-take — everything that makes Deep Ellum what it is. — SJ

Dew NBA 3X at Bomb Factory
Nothing beats a good old fashioned three-on-three pickup game. This Saturday, 3X will bring that classic fun to The Bomb Factory with co-op basketball matches and food trucks with an NBA-style twist.– CC

Fourth Anniversary Getdown at Lakewood Brewing
Four years later and Lakewood Brewing Co. is still amalgamating the finest ingredients into quality beer. To commemorate this fine accomplishment, the brewery will be throwing an epic shindig, where it'll be unveiling a selection of never-before-tasted beers. — CC

Jamey Johnson at Billy Bob's
Jamey Johnson was strongly influenced by some of country music's most cherished luminaries, something he'll no doubt wear on his sleeve this Saturday as he's singing all those lonesome songs. — CC

Burn and Brew at Community Beer Co.
Working out can be taxing on both the body and the mind, if you can't find the willpower to get up and just do it. So what better incentive to get that butt into gear than a nice, cold pint of Community Beer Company's best after you finish? Counter-productive? Don't be a baby — SJ

Reunion Lawn Party at Reunion Tower
Fear of missing out is a legitimate excuse for you to head to Dallas' second Reunion Lawn Party. If it slipped your mind the first time around, don't let it happen again. — CC

Denton Comedy Fest w/ Shane Mauss at J&J's Pizza
The inaugural Denton Comedy Fest, which runs from Thursday through Saturday. Sustaining a comedy festival places a lot of demand on a local comedy scene. Just sustaining enough of a comedy scene to claim your town has a “comedy scene” is daunting enough by itself. The festival is showcasing a diverse lineup of talent from Denton and other parts of DFW, and includes some national acts — the final show is being headlined by Shane Mauss, who's been featured on Comedy Central, and made several appearances on Conan. — Alex Gaskin

Jimbo Jam at Henry's Majestic
To celebrate the recent and unfortunate passing of James “Jimbo” Patrick Trusheim, Henry's Majestic is hosting this benefit to honor Jimbo and his life, on what would have been the day he was planning to marry his high school sweetheart. The band Armstead will also be performing. — SJ

Reading While Intoxicated Magnolia Pub Crawl
Pub crawling down Magnolia Avenue with a book in your hand isn't unconventional, it makes you a studious drunk, so grab those book marks and drink away. — SJ

Alejandro Escovedo at Kessler Theater
Critical darling, cult favorite, Austin legend and Dallas import Alejandro Escovedo plays a hometown set tonight. That news should excite Dallas resident and former president George W. Bush, who was known to rock Escovedo's song “Castanets” at the White House. Unfortunately, upon learning that tidbit, the left-leaning Escovedo stopped performing the song live for a spell. Now that Bush has long been out of office, the song's since made its return to Escovedo's set lists, and he'll likely pull it out tonight — that is unless Bush decides to show up. — CG

Pseudo Future at The Prophet Bar
These guys are only interested in “playing very, very loud.” Their words exactly. — SJ

The Black Hole at Texas Theatre
Here's a Disney movie you've probably never seen before and the title pretty much sums it up. As a bonus, Stumptone will play a live album release show behind the screen following the film. — SJ

Kevin Aldridge & The Appraisers (Single Release) at The Chat Room
Here, Aldridge and his backing band are releasing the fourth single from a batch they recorded with television star Jordan Richardson a while back. The very radical Daniel Markham and John LaMonica also perform. — CG

Inter Arma at Three Link///s
One of sRichmond, Virginia's Zeppelin-nodding metal outfit Inter Arma's most recent releaes is a one-song EP. That one song, though, lasts an astounding 46 minutes. This Relapse-signed outfit doesn't shy away from the heavy or the epic. — CG

Dallas County Community Block Party at Southwest Center Mall
Among the attractions here will be an attempt to make the longest Soul Train line ever with over 500 people, which would purportedly make it a Guinness record. That's a long line to go through and you'd better have rhythm, or else stay out of the kitchen. —SJ

DAMN XVI at RBC
Damn, Dallas! Back at it again with the ambient music nights. — CG

Sunday
Pokémon Go Meetup at Dallas Arboretum
“Gotta catch 'em all.” Is this slogan meant for those elusive little creatures, or you players out there? The marketers have the real PokéBalls, now just hop in. On the real, though, the Arboretum has one of the biggest concentrations of Gyms, PokéStops and rare pocket monsters in the whole damn city. — SJ

Bassjackers at SiSu
DJ, Marlon Flohr, and producer, Ralph van Hilst have been playing together since high school. The duo has been named “Top 100 DJ's” in DJmag and have worked with a bunch of mainstream artists. Come see what the fuss is about — from your spot by the pool, no less. — SJ

SHINee at Verizon Theatre
K-pop is one of those ubiquitous genres that only appeals to a very, very specific market. Still, it's hard to deny the still-growing popularity of the genre; which has broken numerous social barriers with its emphasis on sensory overload and squeaky-clean pop aesthetics. It's even reached an arena-level status in the states. SHINee is the latest K-pop outfit to fill that demand. It plays the Verizon Theatre this Sunday. — CC

EC Twins at Bungalow Beach Club
At first glance, it seems the EC Twins really know how to light up a room. The duo's EDM-tinged club bangers will hit right at home at Bungalow this Sunday. — CC

Water Balloon Fight at Quakertown Park
Denton. Water balloons. Water guns. Clean up. Drink…in that order. And bring little ones at your own risk. — SJ