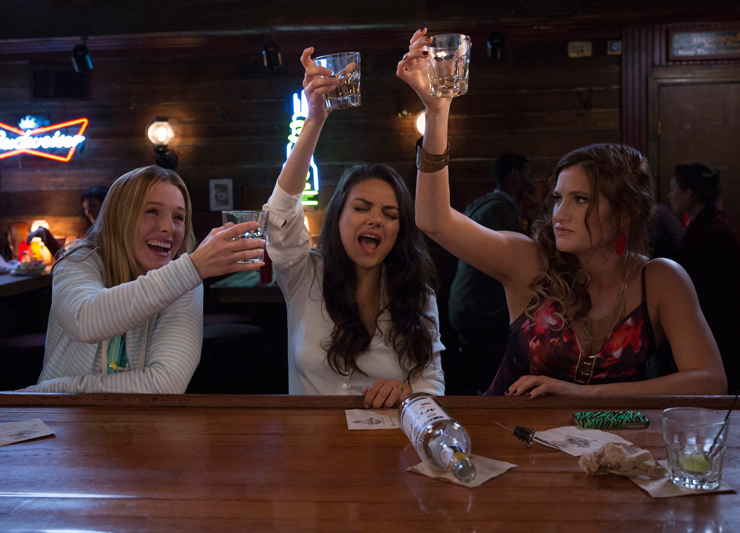 Bad Moms Might Provide The Most Consistent Laughs Of Any Comedy This Summer.

Bad Moms might set a record for montages and number of times a character says the title of the movie in a line of dialogue. But I won’t hold that against it, because Bad Moms also might provide the most consistent laughs of any comedy this summer.

Mila Kunis plays Amy, the overworked mom trying to keep her career, run the house and still be a good parent. Bad Moms crucially doesn’t suggest that this is impossible — just that it’s exhausting. After a particularly dreadful PTA meeting in which ice queen Gwendolyn (Christina Applegate) bans pretty much every ingredient from the upcoming bake sale, Amy walks out in protest.

Keeping up appearances is a losing game.

Over drinks with long-suffering mother of four Kiki (Kristen Bell) and hard-partying single mom Carla (Kathryn Hahn), Amy decides to give herself a well-deserved break, letting her middle school-aged kids make their own meals and kicking out her philandering husband (David Walton).

Much of the comedy comes from writer-directors Jon Lucas and Scott Moore essentially gender-flipping the trio from their breakout hit The Hangover. There’s the sexy ringleader, the put-upon type-A personality and the wild card. But because Kunis, Bell and especially Hahn are such game comedians, they find a way to make it feel fresh instead of a retread, even when the film deploys its own WTF celebrity cameo.

The film loses some points for attempting some emotional resonance that it doesn’t earn or need, frankly. Amy often oscillates wildly from not caring that she’s a “bad mom” (read: that she’s not striving for perfection) to worrying that she actually is a bad mom (read: that she’s selfish and failing her kids). A scene with an extended discussion — complete with visual aids — about the foreskin of uncircumcised penises doesn’t exactly mix well with saccharine heart-to-hearts about the importance of family.

Given that the only other female-driven comedy of note this summer — some film about bustin’ ghosts — has been plagued by endless controversy stoked by obnoxious misogynists and hampered by a studio hell-bent on franchising, it’s nice to see that Bad Moms succeeds on its own terms.