Things To Do On Thursday, February 11. 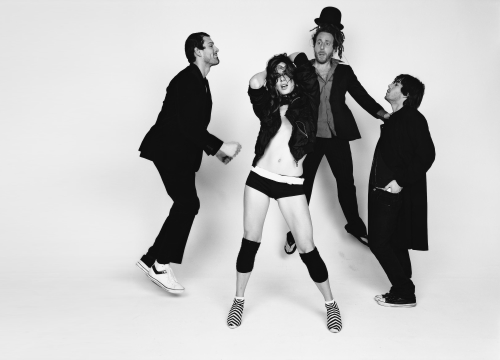 Alas, that game is still in development. A brief video demo that surfaced online is the only way we even know it exists. But in the meantime, there's some ways to spend your time that do exist. Here's a bunch of them, though none of them where punching someone in the dick is permissible. Oh well. — Cory Graves

Brazilian Girls at Dada
Brazilian Girls is an alternative dance band made up of four members, none of which are Brazilian and only one of which is a girl. The band has a poppy, layered sound that's easily danceable, light and fun. The band reunited three years ago, but has yet to release a new album, though one is reportedly in the works. Dreamers opens. — Paul Wedding

Bullet For My Valentine at House of Blues
All the way from Bridgend, Wales, is Bullet For My Valentine! Bullet is here to invade the U.S. with its banging heads and metallic guitar riffs. This band will make you want to run in circles and slay your friend with your whirling tantrum of fists. But, really, if you like metal influenced rock bands from the United Kingdom, check out Bullet for My Valentine. Asking Alexandria and While She Sleeps will open the show. — Roberto Aguilar

Local Education at Three Links
The thirteenth installment of King Camel's Local Education series is a doozy. The show features artist and producer Picnityme who flexes some tight future R&B that's good for your head and your soul; rapper and lyricist $kaduf, who rolls off bars like the flick of a Bic; and dream indie-pop band Field Guide who is on the serious come up. This will also be $kaduf's last show before he pushes off to California, according to the Facebook event page. The cover is $9 at the door. — RA

Luenell at Arlington Improv
Though she appeared in Borat as the hooker with a heart of gold, the title character found in a personal ad, married and took back to Kazakhstan, Luenell Campbell actually makes her living telling jokes. Hard as it is to believe, not everything in that movie was as below board as advertised. Shocking, we know. — CG

Epica at Gas Monkey Bar N' Grill
If ever there was a perfect singer made for symphonic metal, Simone Simons of Epica is that singer. Born in the Netherlands, she learned music by playing flute at age 12. Her interest in symphonic metal was piqued when she first heard the band Nightwish at the age of 15. Next thing she knew, she was asked to front her own band. The rest is history. Infidel Rising, Divine Retribution and Exalt the Throne open. —RA

George Winston at Kessler Theater
The piano styling of George Winston is so damn fluid, relaxed and cognitive. Imagine walking in the early evening through a gentle mist while leaves swirl above your head. Your eyelids may fall heavy, but your heart is light and airy. Winston has been honing his piano skills since the '60s, and has been influenced by some of the greats like Vince Guaraldi, Jimmy Smith and Fats Waller. — RA

Valentine's Stop + Shop at Pegasus Plaza
Did you know they sell Valentine's Day gifts at 7-Eleven? Because they do. But is that really what you want to show up at your date's door with this weekend? Drop by this pop-up shop for something a little more thoughtful, y'know, if you're dating someone that happens to buy into that whole greeting card holiday nonsense. — CG

PDA: An Underground Dance Party at Rubber Gloves
Much like the title suggests, this party will feature some of the best dance tunes from less appreciated genres like industrial, darkwave, post punk, new wave and some techno and house songs as well. It's a free party, so check out some weird new music and get to dancing. — PW

ALL '80s PARTY! PURDY in PINK at Double Wide
DJ LZRPRK is bringing some of the best and worst of the '80s to Double Wide. It's a free dance party featuring music from pop to glam rock to new wave, so check it out and remember why you miss the '80s or are really glad they're over. — PW

Big Bang Meets No Diggity at Beauty Bar
No Diggity is a DJ event put together by DJ Empanadamn in New York City. The mix puts together throwback music and future hits in R&B, sould, disco, funk and various other dance heavy genres. This event will coincide with DJ Sober's regular Thursday Big Bang party, where he'll be celebrating the release of his latest Valentine's mix. 88 Killa hosts. — PW

Eric Bogosian: Bitter Honey The Best of 100 (Monologues) at Wyly Theatre
Eric Bogosian is a performer that's pretty much done it all: from writing, acting (in the Dallas-shot Talk Radio as well as Law and Order: Criminal Intent), to founding a dance theater. He made solo plays popular back in the '80s based around his gripping monologues. For three days he's reviving those same monologues in Dallas. Each night will be a little different, though all three shows will feature some of his most famous performances. — PW

Dallas Stars Night at Addison Ice House
The Stars have been going through a big of a rough patch lately. After being one of the top teams in the league for most of the season, they've really been dropping the ball the last couple months with several losses. But at the very least, you can drink away your sorrows while watching the game at Addison Ice House. And you can meet the team's old goalie Marty Turco and onetime captain Brendan Morrow, while the Stars take on the Chicago Blackhawks. — PW

Saving Private Ryan at Angelika Film Center
Fuck Shakespeare In Love. Saving Private Ryan was for it's time the most visceral and realistic war movie ever made, with the most disturbing opening battle scene of all time. The film is a classic that should be required for pretty much everyone when learning about World War II and what it takes to be a soldier. — PW