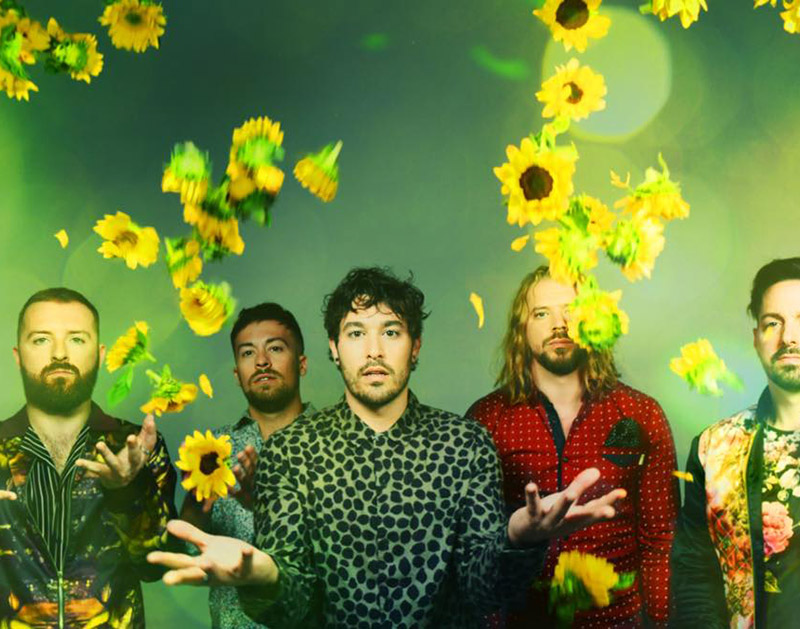 Get To The Otherside With Red Sun Rising At Trees, Drink All The Beer At The Big Texas Beer Fest And Celebrate Selena At Country Burger, Texas Theatre, Club Dada and Top Ten Records.

You may have seen that Motorized Lime Bike Jousting event on Facebook that’s scheduled for this Sunday. And as much as we would’ve enjoyed it, we’ve got some bad news.

It was just an April Fool’s Day joke. Yup. We found out/confirmed our suspicions when we were putting together our bike sharing update last week. You know the one. We wrote about how Dallas now has the most rentable bikes in the entire country and how city of Dallas officials are actually trying to come up with a solution to this bike mess we’re in.

We also found out that even if any bikeshare company was going to start scattering scooters and motorized bikes everywhere, it wouldn’t actually be permitted because Dallas’ current ordinance doesn’t allow those vehicles on streets or bike pathways.

So yeah, it’s a bummer that we won’t be able to see folks jousting on motorized bikes or scooters on the streets of Deep Ellum. But fortunately for us and the rest of the area, there’s plenty to do elsewhere — and we’ve laid out the coolest things you can get up to this weekend below. Have fun out there. — Obed Manuel

Midnight Madness: The Room at Inwood Theatre
Get your spoons ready! — OM

Darkness Divided, Charcoal Tongue at Prophet Bar
Divided Darkness is a Christian Metalcore band, originally from San Antonio. Formed as a worship band in 2010, it has held on to the Christian messages though its music has gotten heavier. Delivering heavy riffs, guitar sweeps — and a religious message — the band cites influences like As I lay Dying and The Devil Wears Prada as inspiration for its style of Metalcore. Charcoal Tongues, also a San Antonio native, plays a blend of hard rock with 2000s Industrial Metal and Metalcore influences. — Jacob Besser

Chrome Sparks at Deep Ellum Art Company
The indie electronic dance out of Brooklyn mixes bright synths and groovy, danceable beats on top of calming ambient soundscapes. Chrome Sparks has a distinct fun sound that incorporates both experimental electronic music and more pop-centric sounds. Northern California duo Machinedrum — also known as Syndrome and Tstewart —  was one of the first groups to define glitch-hop with its signature blend of hip-hop beats and experimental electronica. Suffice it to say, this is going to be one dance-worthy show. — JB

Ottoman Turks and Friends at Double Wide
Based out of Dallas/College Station, the country rock band plays classic country songs along with some hints of blues rock, rockabilly, surf rock and classic rock. Having played in the DFW scene for a while the outfit has defined itself as a country band unafraid to take risks. Crooked Bones, led by Whiskey Rambler’s Tyler Rogeaux, will also perform. — JB

Big Texas Beer Fest at Automotive Building at Fair Park
Today kicks off this two-day celebration of all things beer. Organizers are expecting more than 120 breweries and at least 500 different brews to try from. Food trucks and other vendors will be on site to soak up the booze in your belly. — OM

John 5 and The Creatures at Trees
The former Marilyn Manson, Rob Zombie and David Lee Roth guitarist is back with The Creatures, an outfit that indulges playing guitar heavy prog-rock with moments of math-rock influence. The Creature’s talent provide a great basis for John 5 sporadic and powerful guitar performances, so expect a solid show from the seasoned guitarist. Rivethead and Nytrate also perform. — JB

Disco, TX The Get Down at The Stoneleigh
A throwback celebration, hear the rhythm and rhyme of the disco era to the evolution of hip-hop. Take inspiration from Netflix series The Get Down and bring out your disco shorts and velor tracksuits. MC 88 Killa will be hosting and expect nothing short of amazing it’s his birthday too! — GT

Badfish (Sublime Tribute) at House of Blues
They don’t actually practice Santeria, but they do play all your favorite Sublime tunes. — OM

WoC Open Mic at Maroches Bakery
The organizers at Lucha Dallas have designated this month’s open mic for women of color in honor of Women’s History Month. — OM

Vinyl Fantasy at Single Wide
DJs Clumsy & Shy and Emptycylinder will play all the garage, psych and progressive rock as well as funk and soul that you can handle. No cover. Just come ready have a few drinks and enjoy some tunes. — OM

Spinster Records Showcase
Performing tonight at this folk showcase are Andrew James, Mr. Carter Davis and Penny and Dime. Show is free and you can totally BYOB. — OM

Murderino at Noble Rey Brewing Company
Gather around for happy hour with fellow lovers of the My Favorite Murder podcast. — OM

Selena 35mm at Texas Theatre
Check out the screening of the 1997 film that launched Jennifer Lopez’s career. Screening starts at 7 p.m. and tickets will run you $11. — OM

Selena Arts Tribute Show at Top Ten Records
A special mural will be unveiled at this art show that will follow the screening of Selena at Texas Theatre. This appreciation of Selena-inspired art is free and open to the public. — OM

Robot Maria at Double Wide
Kaleider and Robot Maria play a mix of electronic music with post rock elements. Their music has a mix of instrumental sections along with drum loops, industrial noise and elctronic experimentation. Isopod is a Dallas based musician who plays a mixture of moog synths with new wave influences. — JB

Dallas: The 40th Year Reunion at The Longhorn Ballroom
The celebration of the iconic show will feature a talk with original cast members, live music and trivia contests for fans — all in the place where many of the show’s scenes were filmed. Party runs from 6-10 p.m. — OM

Red Sun Rising at Trees
The band is stopping in Big D just as its newest album, Thread, hits the market. The album’s title is derived from the usage of the hashtag #WeAreThread used to describe their music genre it represents. Kind of like #WeAreNegan but not as evil. Dark Avenue, Reflecting Echoes and Extension open. — GT

Locked & Loaded at Armoury D.E.
Knifight, Atop and Rei Clone are putting on a show for free. Just for you. Show starts at 9 p.m. — GT

Downtown Dallas Scavenger Hunt
Sign up using the link above and make sure your crew is ready to walk around downtown in search of the rest of your clues. Space is limited, so be sure to sign up early. — OM

Unsilent Spring Postcard Party at Deep Vellum Books
It’s time to fight back and save the earth. With Earth Day approaching come in and write a postcard to elected officials to let them know you want action. Stop by Dark Moon & Poetry between 12-5 p.m to let your voice be heard. — GT

Easter Keg Hunt at The Rustic
Easter egg hunts aren’t just for kids. Join in on The Rustic Easter Keg hunt! The Rustic will drop hints on their Facebook and Instagram about where the kegs are located. The contestant with the most kegs found will win a $250 gift card and one Texas Ale Project Keg of 50 ft Jackrabbit IPA. — GT

Spring Gallery Walk 2018 at Dallas Art Dealers Association
More than 20 galleries and collections will participate in this all-day event that will feature art talks, special exhibitions and workshops. Enjoy a full spectrum of the art Dallas has to offer. — OM

Ty Dolla $ign at House of Blues
The Beach House 3 Tour is here, and we’re guessing Ty Dollaa $ign’s Dallas fans are hype to hear hits like “Love U Better,” “Ex” and “Stare” live. This show’s gonna be so lit you’ll want to drive your “Droptop in the Rain” to it. — GT

DFW Witchy Bazaar at The Tin Panther
At this gathering of local vendors, shop for handcrafted goods and learn a few tricks during yoga lessons and arts and crafts tutorials. Everything kicks off at 3 p.m. — OM

Selena Day Afterparty at Club Dada
Faded Deejays and “Screwmbia” innovator Principe Q will be playing jams all night long to continue the celebration of Selena’s life. And as long as you get here before midnight, you get in for free. — OM

The Do-Gooder Meet Up at Double Wide
Finally do that good thing you’ve been wanting to do! Seriously. The Double Wide crew put together this gathering where area non-profits will be on site to help guide you and introduce you to efforts you may have been itching to get involved with but didn’t know how. The mingling kicks off at 2 p.m. — OM

Alt 90 at Sundown at Granada
The local ‘90s cover band will take the stage from 11 p.m. until close and will play — you guessed it — all the ‘90s covers you can handle. From Nirvana to Red Hot Chili Peppers. Come get your nostalgia fill. — OM

She Kills Monsters at Theatre Three
She Kills Monsters has an aggressive title, but rest assured, it will make you laugh. The comedy written by Qui Nguyen gives an inside look at the world of fantasy role-playing games. Bring out your inner geek and warrior spirit for this one. — GT

Dallas Pets Alive Adoption Event at Community Beer Company
If you’re looking to add a fur baby to your life, consider this get-together of beer and dog lovers. From 2-5 p.m., a few baby puppies will be up for adoption at Community Beer Co. The good folks there will also be giving special tours of the brewery. Discounted tickets are available. — OM

Brian Fallon & The Howling Weather at Kessler Theater
Fallon brings his authentic rock music from his latest release “Sleepwalkers”. His inspiration is parenting role as a father of two. The album brings a combination of his previous band Gaslight Anthem, but with a more uplifting feel. The Howling Weather will be coming along.
— GT

Shutup! It’s Sunday at Prophet Bar
Just because it’s Sunday doesn’t mean the fun is over. End your weekend with performances by Moment Before, White Rhiinos and Kinsley August. Doors open at 6:30 p.m. — GT

Waitress at Music Hall at Fair Park
Experience this musical based on the eponymous 2007 film about a small town woman trying to escape the clutches of an abusive husband and the diner job that’s keeping her stagnant. — GT

All Frank Ocean Everything at RBC
It’s Lonny Breaux’s turn at an all/everything throwdown. — OM

Easter In The Park at Oak Lawn Park
Dress up your baby puppy and enter it to win various contests, including best look-a-like and best spring costume. And don’t forget: the pooch parade kicks of at 2 p.m. — OM

Easter at The Adolphus
The staff at The Adolphus will serve up scrumptious variety — one that includes chicken and waffles, goat leg and Texas honey glazed ham. Click the link above for full details. Tickets are $95. — OM

Jesus Christ Superstar at Alamo Drafthouse Cedars
The 1973 film based on the controversial musical of the same name centers on the events leading up to — spoiler alert! — the crucifixion of Jesus Christ. — OM

American Idol Watch Party with Ron Bultongez at The Rustic
The American Idol hopeful will be on site to do a brief meet and greet and will perform after the newest episode airs. So come hang out and maybe have a drink with Ron and wish him good luck. — OM

Laugh Your Mass off at Main at South Side
Austin’s own Arielle Norman will headline this show after De De T, Taylor Higginbotham and Kerry Smith dish out the jokes. — OM