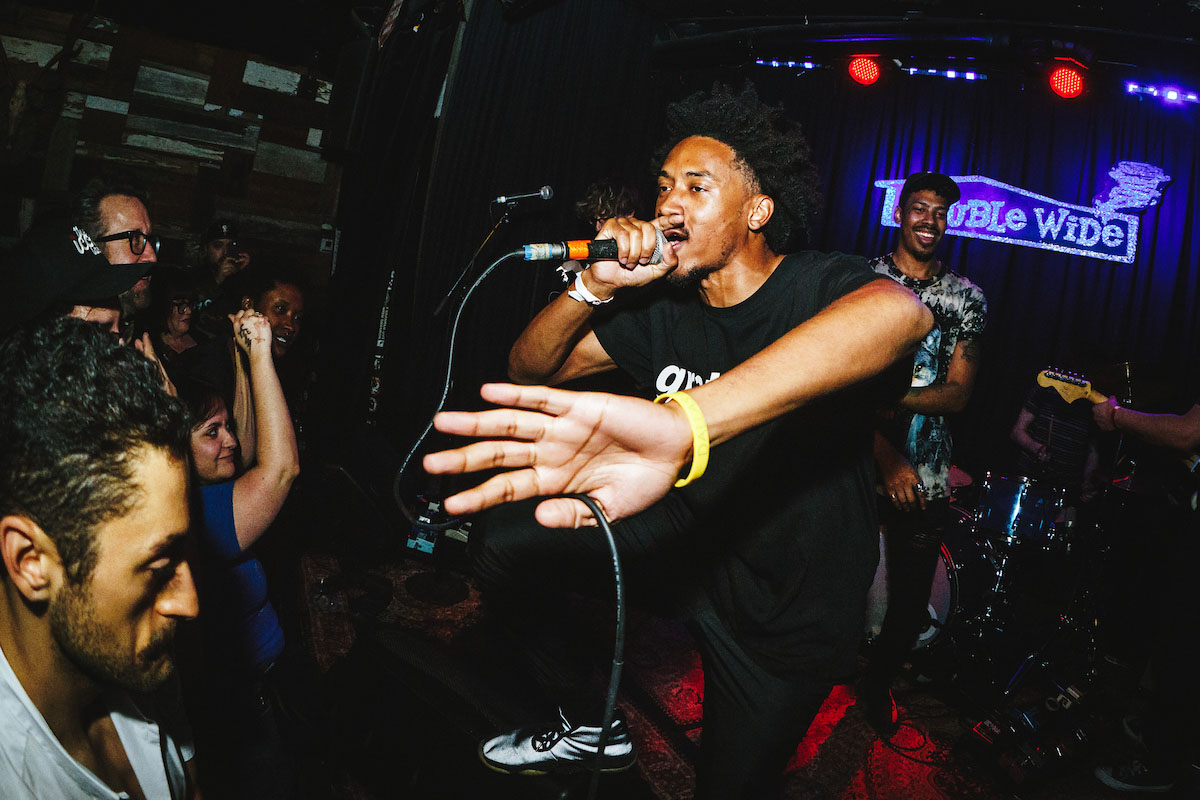 Jam With A Line Up Of Dallas’ Best Talent Presented By Bobby Sessions, Free Fall With John Mayer, And 50 Other Things To Do This Weekend.

If you don’t have plans this weekend already, make some. Please.

We don’t want you getting so bored that you and your friends eventually reach the point that you’re like, “Hey, let’s dig up my dead grandma and take the valuables she was buried with” the way James Howard of Kentucky and his two friends did.

The three were charged with violating a grave, so at least they’ll face their justice.

But seriously, if you don’t already have plans, here’s a handy list all the cool graveyard-free shenanigans you can get into this weekend. — Obed Manuel

Phora at Gas Monkey Live
This self-made OC rapper on the rise comes through Dallas on a tour promoting his latest album, Yours Truly Forever. — AC

Look and See: A Portrait of Wendell Berry at The Texas Theatre
An examination of an American farmer, novelist, poet and environmental activist with archival footage, interviews with family members and readings of his poetry. — AC

A Ghost Story at The Texas Theatre
A weird fiction-style tale of life after death, time travel, love, loss and denial. Don’t be fooled by the title or poster; this isn’t a horror story, but a strange and highly original tale. Starring Casey Affleck. — AC

Brew Ha-Ha Comedy Series at Rabbit Hole Brewing
Enjoy brews and stand-up at this mash-up of comedy and dating show where one contestant will win a date with a comedian. The hitch? Like dating shows of yesteryear, contestants don’t get to see their potential paramour, only listen. — AC

Elise Davis at The Rustic
Smooth , sultry country storytelling from a Nashville-based singer-songwriter who draws inspiration from love, life and growing up in the south. — AC

Sommore at Arlington Improv (SOLD OUT)
You’ve seen her on TV and in such movies as Soul Plane, Friday After Next, Dirty Laundry and Family Reunion, but those are all side gigs. Stand-up is her thing and, judging from her sold-out show, her reputation precedes her. — AC

Los Lonely Boys at House of Blues
No, seriously. I’m asking. How far is heaven? — AC

Social Science: Conundrum at Perot Museum
Sure, a lot of the Perot’s exhibits are aimed at kids, but this event makes them accessible even to adults. How, you ask? Why, with booze. That’s right, get a few signature cocktails in you and you can appreciate displays designed even for the youngest demographics. Add to that a few performances and discussions, and this after-hours adults-only event is sure to excite. — AC

Summer Hot Underwear Ride at Red Star Bicycle Shop
Ever get a piece of clothing tangled up in your bike chain? Well, there’s no chance of that at this clothing-light bike ride. — AC

Putridity, Delusional Parasitosis, DTF, Primorius at The Rail Club
Do you like guitars down-tuned to the point they make your lower intestine quiver? What about vocals that sound like a rock grinder working overtime? Well, have I got a show for you. — AC

$1,000 Battle of the Bandz: Hip-Hop at Trees
Contestants have just 10 minutes to throw down their best material in a face-off that can cover at least part of their rent. — AC

Queen and Adam Lambert at American Airlines Center
They will rock you. — AC

Waxahatchee, Palehound, Outer Spaces at Club Dada
A trio of bold, bright and melodic indie rock bands from outside of Texas. — AC

Fiji at Gas Monkey Bar and Grill
Smooth R&B/reggae fusion jams to cool off to. — AC

All Diplo Everything at RBC
Blue, The Misfit and The John Stewart will spin. Five bucks gets you in, 21 and up. — OM

Tecmo Madison Presents: Tecmo Dallas at Irving Convention Center
Game on. This is where the road to Tecmo Madison XIV starts, so it’s time to you bust out your best Tecmo skills. Winner will be flown out to next year’s Tecmo Madison XIV. —  Pauline Esguerra

John Mayer at American Airlines Center
This heartthrob with his raspy voice and swaying, romantic tunes will have you free fallin’ in love all over again. —  PE

Alex Harris, Matt Swagnew and DJ KMOR at Double Wide
So many cool hip-hop jams so chill they’re bound to give you brain freeze. Join Alex Harris as he plays tracks from his newest project Foolish.— AC

This show has been postponed.

Photo Swap Meet at Dallas Center for Photography
Calling all photographers: check out this event for some very unusual and rare photo equipment finds including cameras, lenses and lighting equipment. —  PE

Adakain, Kaiyros, Save Me San Diego, Sweet Chaos at Trees
Some hard rock and metal music to drain your sorrows, and maybe a couple drinks too. —  PE

With Teeth, Navajo, The Leader The Legend, Forget Conformity at The Rail Club
A full metal lineup for all you headbangers. —  PE

Sharam at It’ll Do Club
Some radioactive techno music will do just the trick this weekend. —  PE

Brian McKnight at Fair Park Music Hall
You’ll be back at one before you know it. —  OM

Viva Dallas Burlesque Presents Grease at Viva’s Lounge
A Viva’s Burlesque adaptation of the popular musical series. Because it doesn’t matter if you win or lose, it’s what you do with your dancin’ shoes! —  PE

Bobby Sessions Presents the DDD Experience at Club Dada
Bobby Sessions, Sam Lao, Blue, The Misfit., Rikki Blue and more. How are tickets still available for this one? — OM

Maze ft. Frankie Beverly at Verizon Theatre
Soulful, yet distinct tunes. Two voices perfectly blended into one that you probably cannot get enough of. —  PE

War On The Catwalk at House of Blues
Starring some of the contestants from Season 9 of RuPaul’s Drag Race comes a stellar performance on the catwalk. —  PE

Emo Nite Dallas at RBC
Another installment of this traveling party. Time to get sad and jump around. — OM

Chad Calek at House of Blues
On his Sir NoFace tour, check out this paranormal genre director proving the existence of ghosts with an interesting screening for all the skeptics out there. —  PE

Incubus at Starplex Pavilion
Will you be there, whatever tomorrow brings? —  PE

Primus at South Side Ballroom
Tickets have been sold out for a while for this one, but if you were lucky enough to snatch one, then enjoy. The band will probably play the tunes of its first album in six years, The Desaturating Seven, which was announced at the end of last month. — OM

Back To School Mimosa Walk at Bishop Arts
The perfect time of the month to forget that school is starting up again. —  PE

Thieves of Sunrise Single Release Party at Spinster Records
Celebrating the release of Thieves Of Sunrise’s “I Walk Away’” and “Save Me Tonight” singles on vinyl. — PE

Ramon Ayala at Billy Bob’s Texas
Catch this pioneer of modern Mexican music as he shows off his master accordion skills. — OM

Blame the Comic at Hyena’s Comedy Club Dallas
He won’t be to blame if your night isn’t full of laughs. —  PE

First Sunday at Sons of Hermann Hall
A salon party with some cool locals — discussing different topics and grubbing down on tasty food. —  PE

Money Man at Gas Monkey Live
Money Man will probably be playing tracks off his latest mixtape, Secret Society, so you’re in for fun night. — OM

Peticolas Ping Pong Tournament at Peticolas Brewing Company
Channel your inner Forrest Gump and win out this tournament. If not, at least you tried… and got your first beers on the house. —  PE