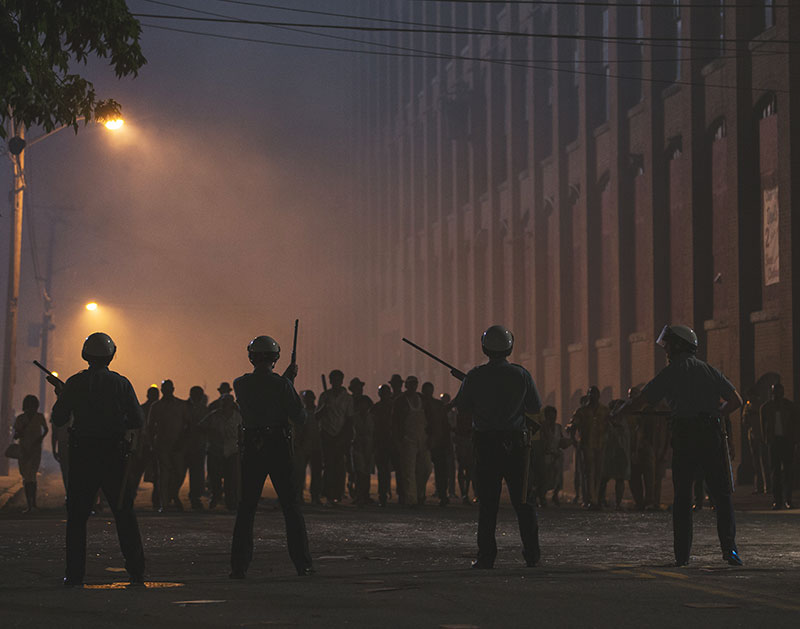 On Detroit, Logan Lucky, The Trip To Spain and The Rest Of August’s New Releases, Limited Showings And Repertory Screenings.

The summer is winding down, which means we’re in our annual lull. Does Hollywood not realize that it’s still stupid hot out and we need a place to seek refuge for a few hours? Apparently not.

Fortunately, we’re not totally SOL this August. Over the course of this month, we’ve got new films from Oscar-winning directors, as well as some sharp indie comedies and even a slate of gorgeous musicals up at the McKinney Classic Film Festival, which will run from August 25 though 27.

So what will you be watching in theaters this month? Glad you asked!

Detroit.
Director: Kathryn Bigelow.
Writer: Mark Boal.
Cast: John Boyega, Will Poulter, Jacob Latimer, Algee Smith.
Opens: Friday, August 4.
The 1967 Detroit riots are a dark part of our nation’s history, and one that hasn’t been explored nearly as in-depth as it should be, given the fact that horrific police brutality and wide socioeconomic disparity in one of the country’s most prosperous cities nearly ripped it apart. Maybe Kathryn Bigelow and Mark Boal, the dynamic filmmaking duo that they are, aren’t the best equipped to tell this particular story of racial injustice. But they’ll definitely deliver a harrowing experience about the people caught up in terrifying circumstances, just like they did in The Hurt Locker and Zero Dark Thirty.

The Hitman’s Bodyguard.
Director: Patrick Hughes.
Writer: Tom O’Connor.
Cast: Ryan Reynolds, Samuel L. Jackson, Gary Oldman, Salma Hayek.
Opens: Friday, August 18.
Ryan Reynolds has to protect one of the world’s most effective hitmen (Samuel L. Jackson) long enough for him to testify against a dictator (Gary Oldman.) This eitherlooks like a much dumber version of In Bruges or a much funnier version of 16 Blocks, but dammit if I didn’t laugh really hard at the first trailer, which uses Whitney Houston’s “I Will Always Love You” to comical effect.

Logan Lucky.
Director: Steven Soderbergh.
Writer: Rebecca Blunt.
Cast: Channing Tatum, Adam Driver, Daniel Craig, Riley Keough.
Opens: Friday, August 18.
Now we’re talkin’! Steven Soderbergh, one of the best modern directors, comes out of retirement for this southern-fried heist starring some extremely funny people, as well as people known more for their brooding than for getting a chance to live it up (we’re looking at you, Daniel Craig). Here, two down-on-their-luck brothers (Tatum and Driver) team up to steal the cash from the Coca-Cola 600, arguably the biggest NASCAR event of the year. I don’t know about you, but my engines are revved.

Crown Heights.
Director: Matt Ruskin.
Writer: Matt Ruskin.
Cast: Keith Stanfield, Nestor Carbonell, Nnamdi Asomugha, Bill Camp.
Opens: Friday, August 25.
Based on a true, infuriating and sadly all-too-common story, Crown Heights is based on the life of Colin Warner (played here by Keith Stanfield), a man from the titular New York City neighborhood who is wrongfully imprisoned for much of his life. His friend Carl King (Nnamdi Asomugha) then dedicated his life to making sure Warner was released, even as he fought against a justice system and presidents (Reagan and Clinton, in particular) that wanted to see even more people behind bars.

Ingrid Goes West.
Director: Matt Spicer.
Writer: Matt Spider, David Branson Smith.
Cast: Aubrey Plaza, Elizabeth Olsen, O’Shea Jackson Jr, Wyatt Russell.
Things get crazy fast in this pitch-black comedy about an obsessive woman (Aubrey Plaza) who immerses herself into the life of a celebrity (Elizabeth Olsen). There are drugs. There’s murder. There are car accidents. This movie has it all for those who want to take a walk on the wild side.

Patti Cake$.
Director: Geremy Jasper.
Writer: Geremy Jasper.
Cast: Danielle Macdonald, Bridgett Everett, Siddharth Dhananjay, Mamoudou Athie.
One of the most pleasant surprises of this year’s Dallas International Film Festival was this unvarnished but still inspiring dramedy about a female rapper (a radiant Danielle Macdonald) who hopes to make it despite barely surviving with her alcoholic mother (a shockingly good Bridgett Everett) and facing constant put-downs. This one’s a real gem. Don’t miss it.

The Trip to Spain.
Director: Michael Winterbottom.
Writers: Steve Coogan, Rob Brydon.
Cast: Steve Coogan, Rob Brydon, Marta Barrio, Claire Keelan.
Steve Coogan and Rob Brydon return for a third helping of their largely improvised series about two friends roaming around Europe, eating decadent meals and doing impressions of great actors. This might not be a dish for everyone, but this is exactly my kind of thing.

Wind River.
Director: Taylor Sheridan.
Writer: Taylor Sheridan.
Cast: Jeremy Renner, Elizabeth Olsen, Graham Greene, Gil Birmingham.
Taylor Sheridan wrote both the incredible Sicario and the pretty good Hell or High Water — the latter of which was Oscar-nominated nominated for both Best Picture and Best Original Screenplay — and now he takes his shot at directing with another thriller. The film stars Jeremy Renner as a local cop and Elizabeth Olsen as an FBI agent as they both investigate a brutal murder on an Indian reservation.

The Princess Bride.
Director: Rob Reiner.
Writer: William Goldman.
Cast: Cary Elwes, Robin Wright, Mandy Patinkin, Chris Sarandon.
Playing At: Majestic Theatre.
Showing: Saturday, August 12.
Sure, you’ve probably seen The Princess Bride hundreds of times. But I bet you haven’t seen it with Cary Elwes (Westley himeslf!) in attendance. That’s exactly what the Majestic will be offering here If you want an even richer experience, read Elwes’ behind-the-scenes book As You Wish before you go. It will make you appreciate how they pulled off the film’s magical blend of humor, action and romance even more than you already do.

Dark City.
Director: Alex Proyas.
Writers: Alex Proyas, Lem Dobbs, David S. Goyer.
Cast: Rufus Sewell, William Hurt, Kiefer Sutherland, Jennifer Connelly.
Playing At: Angelika Dallas.
Showing: Tuesday, August 22.
Dystopian fiction is exceptionally hard to do well, but Alex Proyas’ masterwork did all that while blending in noir elements and asking essential questions about free will versus destiny — and a full year before The Matrix did at that, as Roger Ebert pointed out in his rave review. It doesn’t have as many “Whoa!” moments as that classic does, granted, but in some ways it’s even more stylish and thought-provoking. It’s also nice to remember that there was a time when Hollywood would fund ambitious sci-fi projects, even if they weren’t based on comic books.

Pee-Wee’s Big Adventure.
Director: Tim Burton.
Writers: Phil Hartman, Paul Reubens, Michael Varhol.
Cast: Paul Reubens, Elizabeth Daily, Mark Holton, Diane Salinger.
Playing At: Texas Theatre.
Showing: Saturday, August 26.
Few people love Pee-Wee Herman as much as I do. I immediately latched onto his weirdo schtick as a kid, which is why this movie has remained a favorite of mine for two decades now. It’s relentlessly funny and weird, and pulls off a lot considering its relatively small budget.

The Pirate.
Director: Vincente Minelli.
Writers: Albert Hackett, Frances Goodrich.
Cast: Judy Garland, Gene Kelly, Walter Slezak, Gladys Cooper.
Playing At: McKinney Performing Arts Center.
Showing: Sunday, August 27.
Gene Kelly. Judy Garland. Cole Porter. Legends all. Their only movie together was this magnificent Vincente Minelli effort, which uses its sets, costumes and colors better than many musicals of the era. I know there are plenty of new and older movies to see on the big screen every month, but trust me when I say there are few experiences as intoxicating as seeing a classic musical like this one in a theater, which is just what this closing-night offering at the McKinney Classic Film Festival promises.