Things To Do On Thursday, October 27. 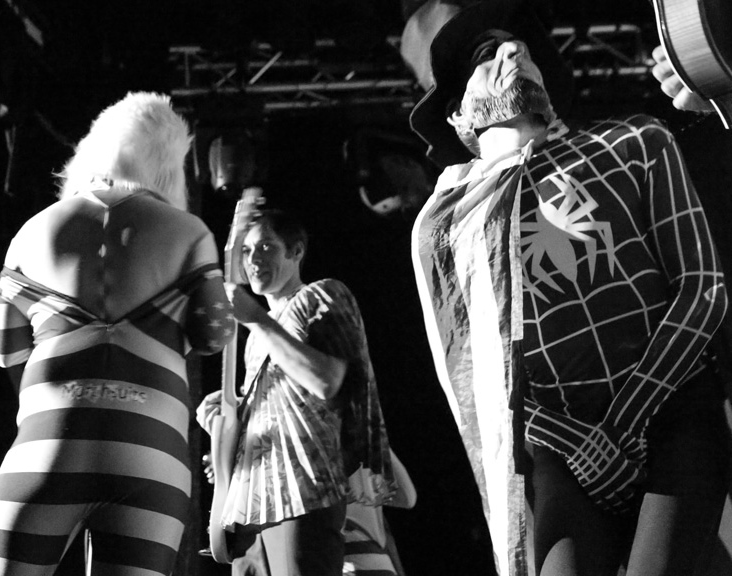 Get Some Soul Power.

Some folks in California were recently looking back at their Class of ’93 high school yearbooks when they realized one of their wizard classmates used his senior quote to predict a 2016 World Series win for the Chicago Cubs. “You heard it here first,” he punctuated his smartass quote with. What the what?!

We’re pretty good at predicting things, too, only we aren’t nearly that good. We can’t tell you what’s going to happen 23 years from now, but we do have a pretty firm grip on the week ahead. And we know exactly what the best things are to do around town tonight. You heard it here first. — Cory Graves

Inaugural Opening at 31 Eleven Gallery (Free)
It’s cool to see the perceived persecution by the Fire Marshall hasn’t discouraged new galleries from tempting their fate. 31 Eleven Gallery (3111 Cole Ave.) will show off its new digs and “outside the cubicle” philosophy while displaying the new works of Mable Dulary and Marsha Filler, both of who will be on hand at this reception. Per the invite, live music and quote-unquote refreshments will be provided. — CG

Beats and Eats at Granada Theater
The Granada continues its monthly food and music pairing series with a four course meal by chef Chad House (Cafe Momentum) and dinner music courtsey of The Texas Gentlemen. — CG

of Montreal at Trees
Six albums into of Montreal’s career the band made the dramatic shift from technology-shunning, ’60s-aping to making some of the most interestingly chaotic, electronic-influenced pop music of the aughts. For the nine albums that followed the sea change in philosophy frontman Kevin Barnes took to writing and recording most of the works himself, partially alienating his friends, family and bandmates in the process, and discovering alter egos in the depths of his personality. Sure, Barnes struggles to reconcile the value he places on art versus how he treats those around him; and while those deficiencies may not make Barnes the greatest role model, they are part of what makes him one of the most prolific and interesting artists of our time. — CG

Decks in the Park at Klyde Warren Park (Free)
If there was a signature edition of this free monthly dance party series, it’d have to be the annual Halloween bash, where a thousand North Texans running the gamut from toddler to GILF show up in costume to dance the night away. DJs Play-N-Skillz, Sharkweek, Black Frames, The Feels, Wish FM, Jose Pascuall G and Nikolas James bring the beats. — CG

“Caught in the Act” (Opening Reception) at Kettle Art (Free)
Some of NTX’s most prolific and well-known rock photographers will display physical copies of their work. Concert pics from the ineffable Mike Brooks, Kathy Tran, Daniel Rodrigue, Erin & Steven Reeves, Jason Janik, Rico DeLeon and Joel Winburne will all be represented, many of them have also shot for our humble little culture site more than a time or two. — CG

Egyptian Lover at Dada
There aren’t many rappers or DJs that can say they’ve been at it for 30-plus years. And whereas his hip-hop-pioneering contemporaries were busy releasing singles, The Egyptian Lover’s 1984 debut LP, On the Nile, was one of the first full-length hip-hop LPs ever released. Even more remarkable is the fact that early tracks from his catalog — songs such as “Egypt, Egypt” — have remained legit club staples even all these years later. He’ll spin records and perform live cuts as well at this one. After all, what is a DJ if he can’t scratch? — CG

Rob Zombie’s 31 at Texas Theatre
Per Rob Zombie, Halloween is the No. 1 day when people go missing, so he decided to make a horror movie about it, set in a haunted carnival on Halloween night. The gore-fest took three edits to get down from an NC-17 to an R rating. — CG

Johnnyswim at House of Blues
This power couple gives us hope when it comes to love. To be so intimately close in every aspect of life is… wow. We don’t even know if we could do it. But we wish them the best. Now the music that comes out of Johnnyswim reflects the strength and intimacy behind the duo, and is almost whimsical and fairy-tale-esque. Not that we’re complaining. See real life love in the form of music tonight at the ol’ HOB. — Chrissi Chetwood

Melanie Martinez at South Side Ballroom
The biggest knock on reality singing competition The Voice is the fact that it has yet to really break a big superstar. Season 3 contestant Melanie Martinez just may be one of the closest things the program can hang its hat on. Since competing for #TeamAdam in 2012, she’s signed to Atlantic and released a debut album last summer. Interestingly enough, that disc’s biggest hit was penned by former American Idol judge Kara DioGuardi. Guess she likes to keep it real. — CG

The Pretty Reckless at Gas Monkey Live
It’s important to note that front woman Taylor Momsen was one of the leads on Gossip Girl. Let me guess, “I did it for the paycheck?” —  Chase Whale

Gettin’ It at Dallas Comedy House
Hilarious stories of women getting what they want.

Halloween Block Party on Henderson
Throw on the ol’ costume, and see if you can hit each of High Fives, Barcadia, Beauty Bar and The Whippersnapper, each will be in full-on party mode tonight. — CG