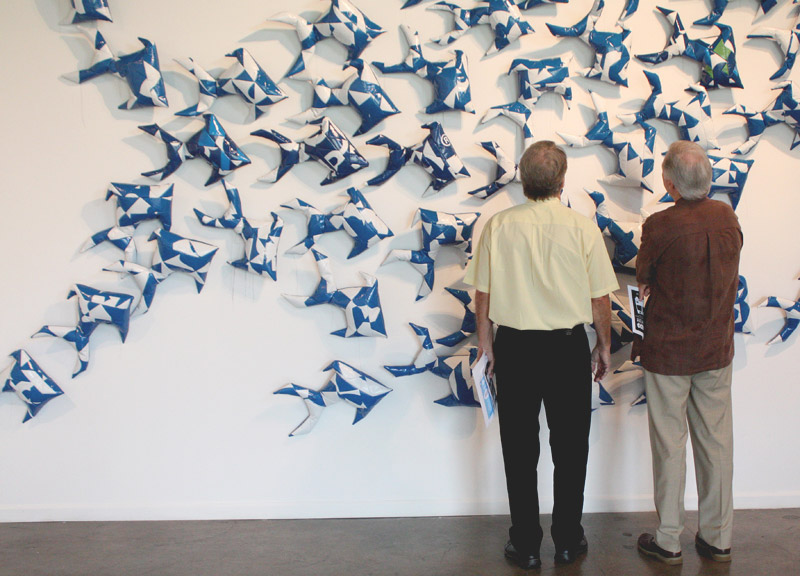 Everything You Need To Know To Keep Your Art Event From Getting Shut Down By The Fire Marshal.

The talk of the art and underground Dallas music scenes of late has also centered around these realms’ perceived persecution at the hand of the Dallas Fire Marshal. And, by their own admission, the DFM has indeed shut down 16 art-related events in a 12-month period, ending with this past weekend.

But to be fair, those 16 shutdowns represent only about two percent of the roughly 700 inspections the department conducted over that same time period.

Still, these shutdowns are very much a concern — not just for the well-organized and very vocal art community, but for citizens that like to attend cool, offbeat events, and for a city that likes to tout the ways in which its artists were one of the biggest groups responsible for revitalizing neighborhoods like the Design District.

Earlier this week, representatives from the Fire Marshal’s office, as well as the Building Inspection department and Office of Cultural Affairs held a “public” meeting — quotes because the meeting took place at noon on a Tuesday, when most of the public was, y’know, at work — to come to some sort of understanding between the city, its gallery owners and other members of its art scene.

We were there, too. And, ever since, we’ve done our best to comb through the notes we took and distill them down to a guide on how to get straight in the eyes of the city — or, in other words, a how-to on throwing a low-key event in your art or DIY space without it getting busted up midway through.

Here’s what we learned.

Read up about certificates of occupancy. According to the City of Dallas, a CO is “a document issued by Building Inspection, which permits land, and/or buildings to be used for the purpose(s) listed on the CO. Chapter 52, ‘Administrative Procedures for the Construction Codes,’ of the Dallas City Code states that except for certain uses, (for example, single family uses, duplex uses, etc.), COs are required prior to occupancy of a building or land.”

It’s important to make sure you get the correct CO from the jump, though, because that’s one of the primary reasons that many events have been getting shut down of late. Spaces with a General Business CO, for instance, aren’t permitted to operate outside of that certificate’s limitations — like, say, by acting like a night club or a venue for one night each month.

To that end, the Dallas Development Code requires that “Except for single family and duplex uses, a person shall not use or change the use of a building, a portion of a building, or land without obtaining a certificate of occupancy from the building official.”

Where do you get your CO? You’ve got some options here:
• The Building Inspection Division is located at 320 E Jefferson Boulevard, Room 118 — Permit Center.
• Or you can apply online.
• The cost for a CO is $215, plus a $65 Code Compliance fee.
• Either route you go, make sure you review this checklist beforehand to make sure you’ve got all your ducks in a row.

Know the right people. Has it been more than two weeks since you turned in your application, but you still haven’t heard back? The following people have been specifically tasked with being the point of contacts between the city and businesses like the ones in the arts community.

Be proactive. Don’t wait until your event is shut down to realize that it goes against the stated use of your space as laid out by your CO. The Fire Marshal is encouraging event organizers to reach out with questions in advance. Given some notice, they say they’re happy to come out and let you know if everything is up to snuff, along with letting you know what you are and aren’t allowed to do. If needed, this kind of communication can also give you some time to find a more suitable site to hold your event should the Fire Marshal give you a thumbs down.

Bug the city to change the code. Another reason the Fire Marshal seems to specifically butt heads with art gallery owners is because, weirdly, there isn’t really a specific CO for that type of business as of now. Many galleries currently are operating as “retail,” “light industrial” or some other type of “general business.” There’s simply not a proper CO for exhibiting and selling works of art, holding opening receptions or hosting other spoken word and intimate music performances.

Maybe we should try and change that? It would sure solve a lot of issues. City employees at this week’s meeting stated they were aware of this shortcoming and are exploring ways to reconcile it. Hold them to that. Call them. Write letters to not only the above contacts, but to council members like Adam Medrano and Scott Griggs, whose districts many galleries operate in.

Keep it on the DL. If you really are insistent on holding DIY underground events that falls squarely outside of the bounds of your facility’s current CO — or, heaven forbid, if you don’t even have a CO in the first place, gasp! — then keep that shit off the radar. Certainly don’t make a public Facebook event for it or send an email to sites like ours for inclusion on our respective things-to-do-around-town posts. During this week’s meeting, the Fire Marshal fully copped to using social media to find out about events happening in spaces they wouldn’t want them taking place in. Maybe just tell your friends and interested the old-fashioned way with a phone call or an email or even a text. Or if you have to use Facebook, make sure you’re creating a private event instead of a public one. That way, the Fire Marshal will be none the wiser. Also, fun fact: Facebook’s event pages actually default as private ones when you create them from a personal account. Long story short: If you’re telling the larger public about an event, public official are probably going to get hip to it somehow. Basically, just use common sense.