Things To Do This Halloween Weekend. 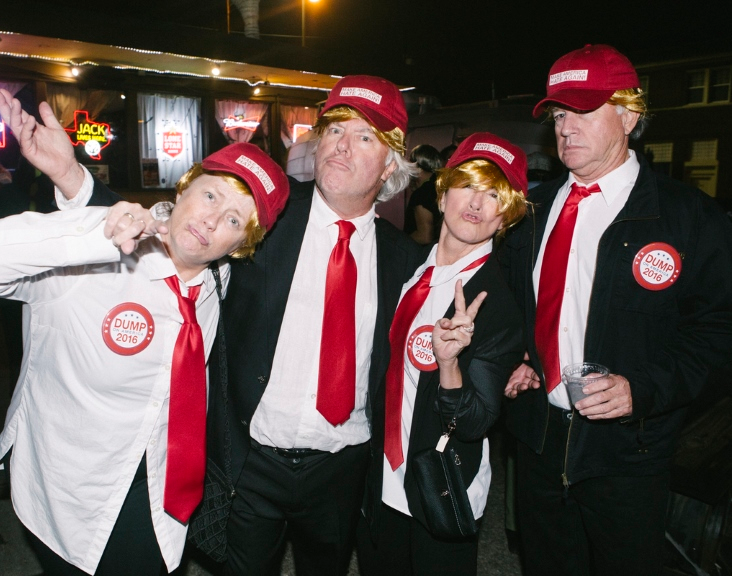 Desperate for something to do this Halloween weekend? Stick your head in a pumpkin, why don’t ya?

All tricking aside, the treats you seek are below. – Cory Graves

Dallas Mavericks vs Houston Rockets at American Airlines Center
The Mavericks play their first home game of the 2016-17 campaign against the Rockets, then immediately head down to Houston for a rematch in their barn on Sunday. By December, these teams will have already played their only four matchups of the entire season. Yeehaw. – CG

Party Static, Tsu Shi Ma Mi Re, We Are The Asteroid at Double Wide
Tsu Shi Ma Mi Re is a trio of female shoegaze rockers from Japan whose music is incredibly well-formed, albeit erratic at times. The Facebook event page puts it perfectly, saying the band’s lyrics are “idiosyncratic, quirky, often funny or disturbing.” WE Are The Asteroid, from Austin, is another trio of prog-rockers. The band includes former members of the venerable Pong and Butthole Surfers. And, of course, everyone should be plenty familiar with Party Static by now, maybe the best live band Dallas has to offer. — Roberto Aguilar

Astronautalis at Kessler Theater
Astronautalis is a well-known commodity around these parts. After being raised in Jacksonville, Florida, the currently Minneapolis-based rapper born Andy Bothwell cut his teeth in the North Texas music scene while attending Southern Methodist University and getting his live show footing at venues up in Denton. He’s been through a number of times in recent years, especially while he was working on his Cut the Body Loose LP with John Congleton. For more info on this one, check out our most recent Q&A with Bothwell here. — Jessi Pereira

Modern ‘Til Midnight! at The Modern Art Museum of Fort Worth
Have you been out to Fort Worth to check out KAWS’ massive, career-spanning “Where the End Starts” exhibit yet? It’s kind of a big deal. They’re throwing a big party to celebrate as much, with music from the likes of White Lung, The Dividends, The Hendersons, Bad Mountain and DJ Sober. Plus, art tours, and grub until midnight? Sounds like a hell of a way to spend a night at the museum. — Obed Manuel

El Ten Eleven at RBC
Instrumental post-rock power duo El Ten Eleven love using looping pedals to create huge sonic works. At the same time, they hate it when you call them a math rock duo, which they decidedly are not. Maybe next they’ll decide to finally be fed up with reviewers that continue to use tired lines like “I can’t believe two guys create all that sound,” to describe the band’s efforts. It’s something you’ve just got to see in person to really get. — CG

Estampas Porteñas Presents: “Deseos…” at Dallas City Performance Hall
Both Friday and Saturday, the Argentinian tango company presents its newest production, “a celebration of the greatest artistic elements of Argentina including the indomitable tango, the athletic malambo of the gauchos, and musical styles that range from the melancholic to celebratory.” It’s their first time performing to Dallas. — CG

American Psycho + A Killer Young Professionals Dance Party at Texas Theatre
Do you like Christian Bale? His early work was a little too new wave for my tastes, but when American Psycho came out in ’00, I think he really came into his own, commercially and artistically. It screens tonight. A dance party follows, where there’ll be plenty of Huey Lewis & the News. — CG

Oak Lawn Halloween Block Party on Cedar Springs
Happening on the 3900 Block of Cedar Springs (a.k.a. The Strip), this event is free for any and all. Expect plenty of scary rainbow paraphernalia and drag queens. Event starts at 7 p.m. and runs through closing time. It’s one of the best Halloween events in the Metroplex every year. Check out this video from last year. — Trace McCaslin

Twisted Trick or Treat at Double Wide
A Judas Priest tribute, an all-female DeVo tribute and a Strokes cover band provide the tunes, and he bar provides a $500 prize to the winner of the costume contest. Just please, for the love of god, please don’t come dressed up as a Nazi. It’s neither original nor cute. — Different Nikolai

Improvised Horror Movie at Dallas Comedy House
You’ve never seen a horror movie like this, but that’s mostly just because this one doesn’t exist yet. Tonight at the DCH — and every Saturday through Halloween — crews will improvise live, cabin-in-the-woods-style slashers based on audience suggestion. Seating is limited, and advanced tickets are strongly recommended. Believe us, though, it’ll slay. — CG

Dallas Marijuana March at JFK Memorial
DFW NORML is hosting its annual marijuana march and is topping it off with an afterparty at The Cherry Apothecary, though we weren’t given a manifesto for what’s going down there… — OM


World Steak Showdown at Billy Bob’s
More than 100 teams from around the world will compete this weekend at the ultimate Texas showdown. You can go and watch or you can be a judge and sample all the steak for $40. — OM

Do For It Records Halloween Show at Curtain Club
Locals covering Faith No More, Clutch, Depche Mode, System of a Down and Green Day. — CG

Bombon Does Dallas at RBC
A Houston dance party featuring Bombon DJs Gracie Chavez and Principe Q. Calavera face painting will be available on the spot. As long as they leave the humidity down there, this should prove a fun night. — OM

Night of the Creeps 35mm + Monster Party Behind the Screen Show at Texas Theatre
Watch the cult classic about aliens, zombies and a deranged killer in all its 35mm glory, and then stay for live music from American Werewolf Academy and Daniel Markham. — OM

Bianca del Rio at South Side Music Hall
The winner of Season 6 of RuPaul’s Drag Race stops in Dallas as a part of the NOT TODAY SATAN tour. Expect blunt jokes and singing from Hurricane Bianca. — OM

King, Nick Hakim at Kessler Theater
KING’s latest album release We are KING was described by Pitchfork as an album that ”harkens back to a time when there were clearer distinctions between R&B, pop, and hip-hop, when acts like Jodeci and SWV ruled the airwaves, and the music was lighter and more sensuous.” Hakim opens. — OM

Pokemon Symphonic Evolutions at Music Hall at Fair Park
Have you noticed all the Ghastlys and Haunters popping up in Pokemon Go this week? Because Halloween. Oh those clever developers at Niantic. Welp, here is a symphony attempting to appeal to the younger crowd by playing some tunes from the popular game/TV series. Oh those clever musicians. — CG

TRUNK SHOW S2 by SMITH II “SS17 Do Not Touch” at Breda Studio
Anyone repulsed by the Drumpf’s recent “grab them by the pussy” remarks will most likely find some art that speaks to them here, where it’s perfectly clear who and what are and aren’t supposed to be touched. — CG

Halloween Roast at Dallas Comedy House
[Who are we roasting this time?] Stephen King. To be honest, I know there are other monsters on it. I’m playing the Wolf Man. Mostly, I think, because of my appearance. But also, I’m a fan of the Wolf Man, I suppose. I guess more than any other monster. But yeah, we’re roasting Stephen King, that son of a bitch. —Scott Crisp

The Jayhawks at Kessler Theater (Sold Out)
Like The Replacements, Soul Asylum, Husker Du and Prince, The Jayhawks were bred in Minneapolis during one of the oddest decades of the 20th century, the ’80s. In addition to surviving that mess, the band released its first new album in forever earlier this year, which remains remarkably faithful to the sound that put the band on the map in the first place. — Chase Whale

The Head and The Heart at South Side Ballroom
These guys and gal have been through a lot within the past couple years: From selling homemade CDs at local shows to getting signed to Sub Pop to touring for what seems like forever with no breaks, all the while finding time to release new material. Now these indie minstrels have a long road of continued success ahead of them, but, considering the hectic and starry-eyed road they just crossed, they seem game. — Jordyn Walters

Stevie Nicks, The Pretenders at American Airlines Center
“I need you to love me / I need you today / Give to me your leather / Take from me my lace.” — Stevie Nicks

Rae Sremmurd, Lil Yachty, Eearz, Bob Swae, Impxct at The Bomb Factory
For a few hours Sunday, at least while the SremmLife tour is holding court, The Bomb Factory will be a no flex zone. So, um, don’t even think about flexing. Stop it. — CG

Concert in the Garden at Urbano Cafe
Here, Good Records has teamed with Urbano Cafe, Jimmy’s Food Store and the Texas Ale Project to bring a concert/”major porch hang” to the garden behind Urbano (1410 N. Fitzhugh) on Sunday, from noon to 5 p.m. Performing that day will be local outfits Squarewheel, CLIFFFS and the live debut of Plandroid, the new side project of The Polyphonic Spree‘s Jason Garner and Nick Earl. — CG