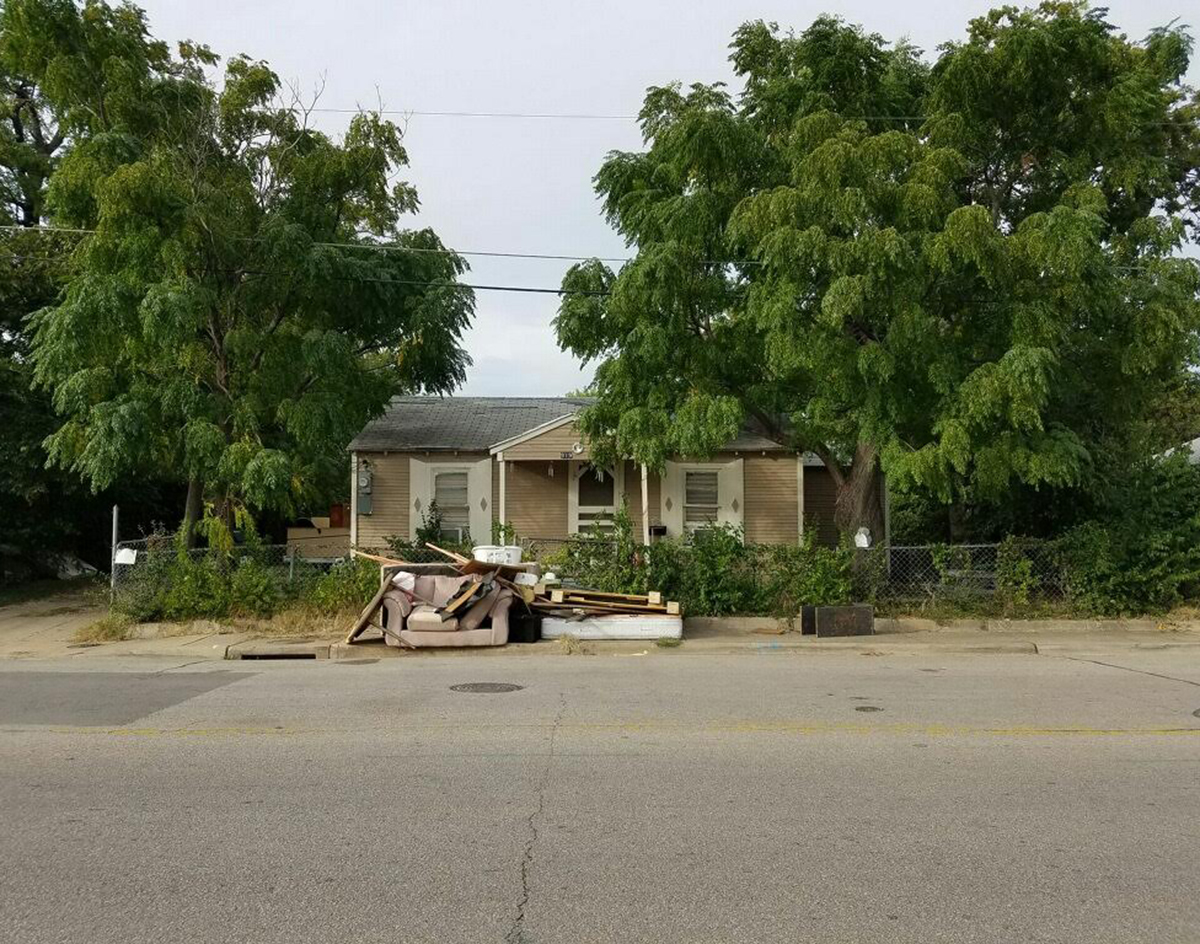 Earlier This Month, 300 Families Were Evicted From Their West Dallas Homes To Make Way For Developers. This Is Just One Such Family’s Story.

Every weekday morning from fall 2006 until spring 2010, Francisco Resendiz rode the school bus from West Dallas to Skyline High School in Pleasant Grove.

The yellow school bus would cross the Trinity River over the almost-crumbling Continental Bridge.

For three years, Francisco would look out the window and watch as crews worked to build the Margaret Hunt Hill Bridge.

“The Bridge to Nowhere” is what the local media called it. But Francisco saw something different. He didn’t know why they were building the bridge. Didn’t care, really. As a student who traveled across almost the entirety of Dallas every day to get to Skyline’s architecture program, he thought he was seeing his future. He was thrilled to have a front-row seat to seeing something so modern and huge being built from the ground up.

But he always wondered one thing: “Why to West Dallas?”

Norma Resendiz, Francisco’s mother, uses one word to describe the condition of the house that she and her family called home for 12 years: deplorable.

“You would walk around and everything would shake,” she says. “Parts of the house just felt unsafe, and it was scary to think what could happen.”

Such was the state of hers and about 300 other HMK Limited properties, most of which are situated in the West Dallas and Oak Cliff. Then, as the Dallas Morning News reported in early October, more than 300 families received letters – the Resendizes included – notifying them that HMK was taking their rental homes off the market and telling them that they would have to move out by the end of the month.

HMK notified Dallas County’s director of code compliance of this play just weeks before the city approved a new ordinance that allows city inspectors into rental homes to make sure the properties are up to code with new standards.

A less-than-ideal physical state for their house wasn’t enough to scare off the Resendiz family, though. It was home, Francisco says. The cramped and crumbling conditions couldn’t dampen years of celebrating birthdays and holidays with his mother, step-father and three younger siblings.

“Even though the 420 square foot house was not the most spacious place to be in, my family and I knew we were more than fortunate to be together with a roof over our heads and a meal on our plates,” Francisco says.

Growing up in these conditions wasn’t as bad as most would think, Francisco says.

His neighbors in this West Dallas community historically known as Los Altos were always welcoming, and local non-profit organizations were available to help needy families. And with the Los Barrios Unidos clinic right down Singleton Boulevard, medical services were always within reach.

It wasn’t until the 2012 opening of the Margaret Hunt Hill Bridge that Francisco really realized that change was coming to his part of town.

Not far from his home, businesses started to pop up – and ones that were vastly different from the type to which his neighborhood had become accustomed. When Four Corners Brewing Co. opened up on Singleton later that year in the former home where the mechanic that his family had regularly taken its car in for repairs, he knew something was up.

His suspicions were confirmed the following year when Trinity Groves broke ground.

“I knew that was gonna bleed over farther west,” Francisco says. “We were in shock seeing how fast it was happening.”

Today, anyone with eyes can see that West Dallas is prime for development – a simple observation that has forced many a longstanding small business and homeowners in the area to start questioning what a future here might hold for them.

Francisco and his mother both concede that the developments near their home have been aesthetically pleasing. But looking nice only masks so much; it was certainly not enough to look past any concerns that the low-income families in their neighborhood were likely being handed the short end of the stick.

Still, while they feared the rapid change, they felt secure – because, every now and then, HMK would mention that maybe – just maybe – they would allow the Resendizes and other area families to make offers so that they could purchase the homes that they had been renting for so long.

“I thought change could happen and I imagined they would try to get rid of us somehow,” Norma says. “I did feel fear, but not much, because I always thought they would sell to us.”

Their long-time hope turned out to be a false bill of goods.

On the evening of October 3, Norma and her son walked to the HMK Limited office on Singleton Boulevard to pay their monthly $450 rent. Upon their arrival, the office attendant notified them that HMK would be holding individual meetings with several tenants about the possibility of purchasing their rental properties – just as the Resendizes had been hearing – and urged them to sign up for a one-on-one. They did so eagerly: Purchasing their house was something the family had dreamed of for years. Leaving the office that night, they felt as if their chance had finally come.

“When I was coming out of high school and going into college, I always had it in my mind that I would save up once I got done with school and buy the land,” Francisco says. “It wasn’t the only place we could afford, but we stayed there because it was our dream.”

The family met with their landlords October 7. Hanna and Khraish Khraish, the father-son co-owners of HMK, were both present that day. After more than a decade of renting, Francisco says this meeting was the first time he’d ever come into contact with the elder Khraish. Initially, he took that as a positive sign. He was hopeful that the meeting would be a productive one.

But it wasn’t – not in the way he and his family had hoped it would be, at least. Instead, the Khraishes told Francisco and Norma that they were being evicted. The Khraishes said the city was forcing them out of the rental business, and that the Resendiz family legally had until the end of December to move out.

But the Khraishes wanted them out even faster than that. If the Resendizes could move out before October 24, the Khraishes said they would refund Francisco’s family the month’s rent and their security deposit. The landlords also promised a letter of recommendation to provide to the family’s next landlord.

Only once the meeting ended did the shock set in. On the walk home, Francisco realized that surely his family wasn’t the only one being given this notice. He turned to his mother to share a stark realization: “If he’s saying we’re being evicted, if he’s telling all the people the same thing,” he told his mom, piecing everything together, “then we’re not the only ones looking for a house – especially if we want to stay in the area.”

In other words, Francisco, who graduated from the University of Texas at Arlington with a degree in architecture, would never be able to fulfill his lifelong dream of designing a house for his family on the patch of land where he’d been raised. 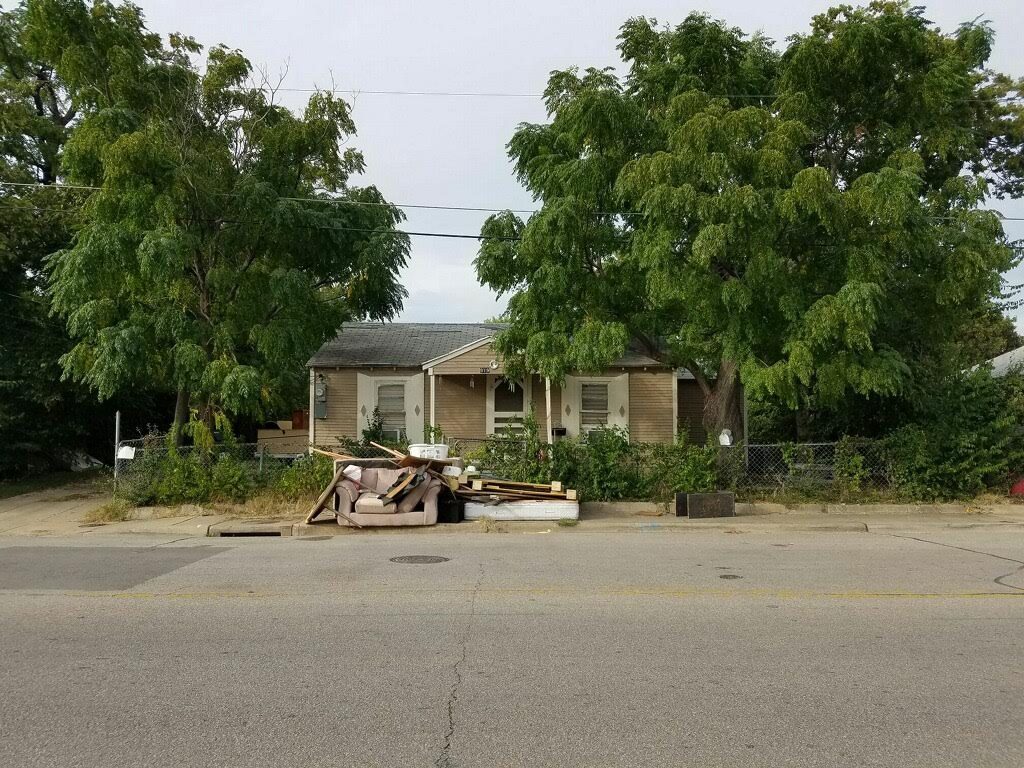 The fight over the evictions in West Dallas has been on local TV newscasts and in newspaper headlines for weeks now. HMK and the city’s leaders – namely Mayor Mike Rawlings and West Dallas city council representative Monica Alonzo – have been trading verbal jabs for weeks now.

Jim Schutze at the Dallas Observer called Rawlings “the single worst destroyer of affordable housing in Dallas,” also referring to (among other actions) a 2014 effort by Rawlings to stop the construction of affordable housing developments. The courts, meanwhile, have gotten into the fight, too: Just this week, a judge extended a delay in the ongoing evictions for two weeks to allow for HMK tenants to better prepare for their moves or for possible unlawful eviction cases against the Khraishes, the Dallas Morning News reported.

Norma says she blames the landlords and the elected officials alike for the current situation. She blames the Khraishes for knowingly letting their homes fall into such disrepair. And she blames the city for not stepping in to defend its citizens sooner.

“One time, there was a city crew repairing some pipes in the street and I invited one of them in and they saw how we were living – and they didn’t care,” Norma says, realizing that she was fairly naïve to expect any sympathy from the city. “Now the city is looking for any pretext to find a way to kick everybody out.”

Francisco too regrets not seeing the writing on the wall earlier. Now he understands why the HMK continued renting its properties and never investing in their upkeep.

“We know that [HMK] has the right to take these houses of the market and sell them,” Francisco says. “They’re sitting on a goldmine. I wouldn’t blame them if they sell.”

The Resendiz family, for its part, is trying not to be bitter about their situation, instead preferring to keep an eye toward the future.

This past weekend, they moved into a home off Canada Drive, just next to the western levee of the Trinity River. It’s a bigger house, and for the first time since the family moved to the U.S. in 1998, the children of the house will now each have a bedroom to call their own.

But that upgrade comes at a cost. The family will be paying $1,200 a month – almost three times than they used to – to rent their new home.

“I’ll have to work more now,” Norma says. “So I’ll have less time with my kids. But I at least know that they’ll be able to finish school here this year, and that we have a place to live.”

Francisco says his plan now is to help his family settle into its new home and to start graduate school next fall. As for that dream of designing a house for his family one day? He says it’s still on the map – albeit one that no longer includes his cherished Los Altos neighborhood.

“Right now, I feel like this battle was lost a long time ago,” Francisco says. “We just didn’t know it.” 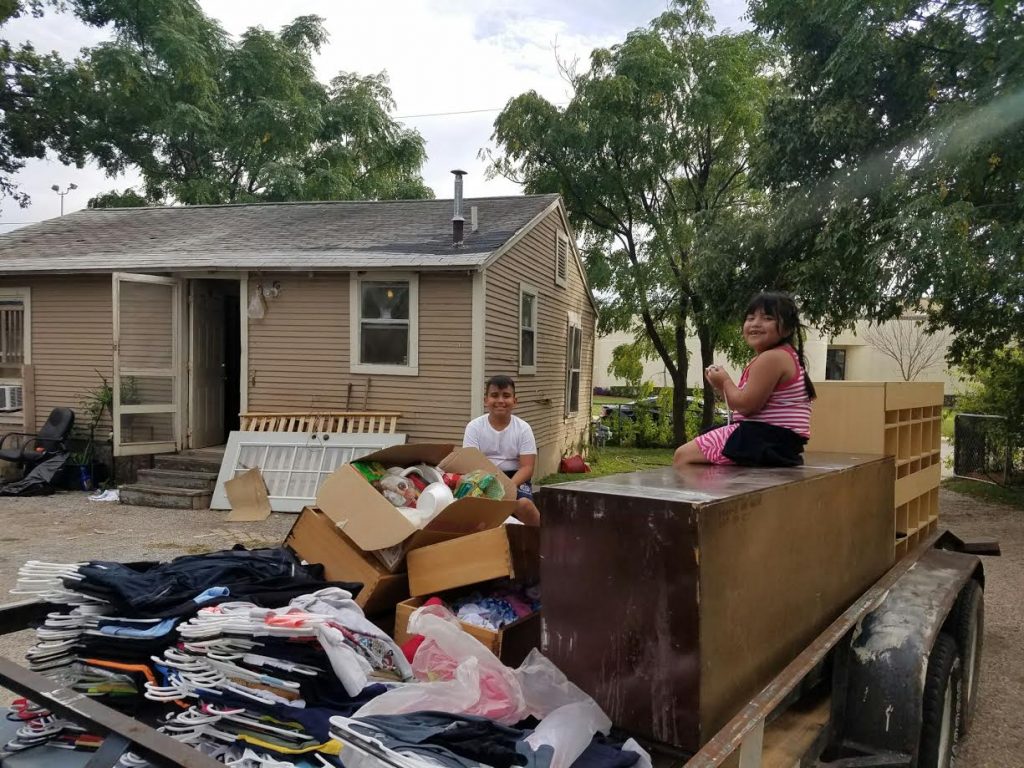 The youngest members of the Resendiz family on moving day. Photo courtesy of Francisco Resendiz.