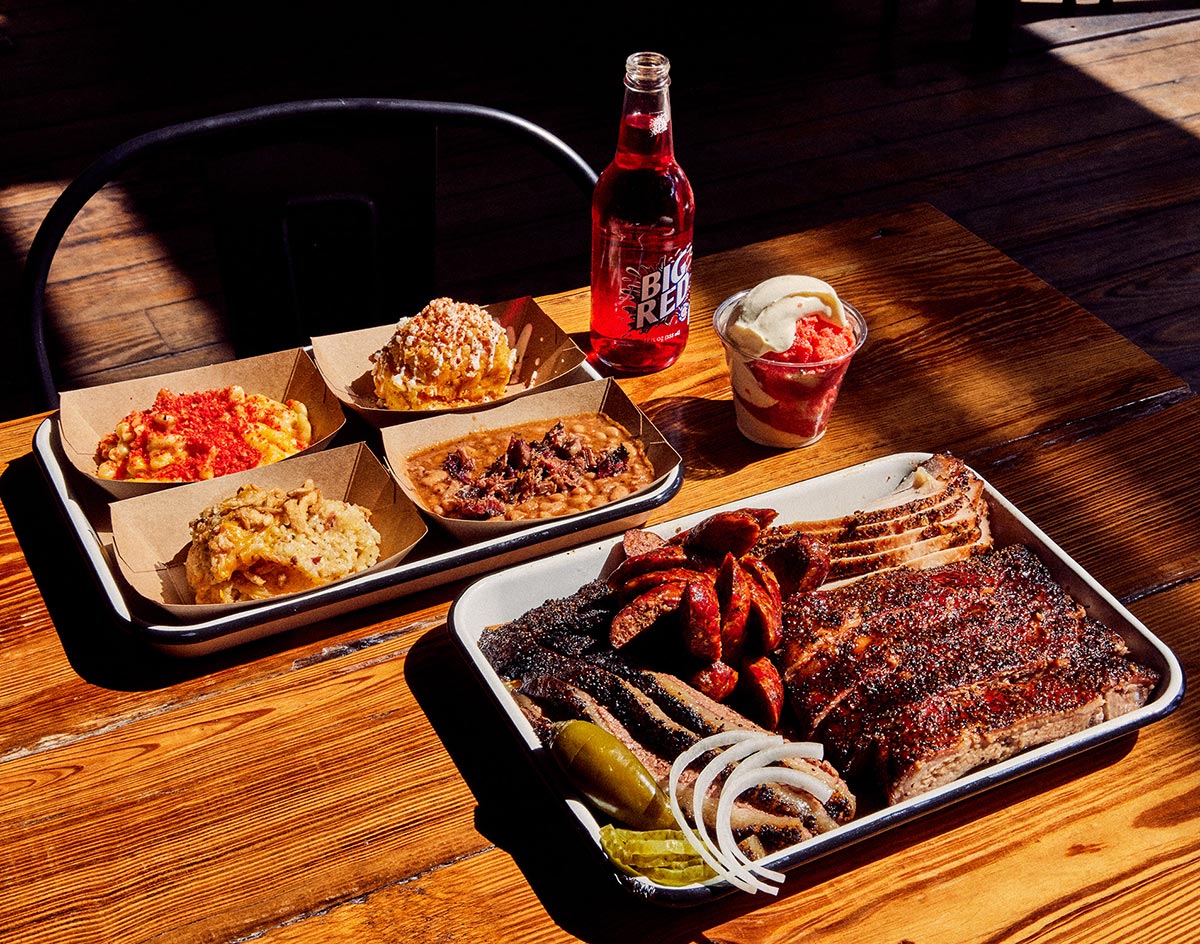 ‘Texas Monthly’ Names A New Fort Worth Barbecue Joint The Tops In The State, Poplar Dallas Hotspot Harris’ House Of Heroes Abruptly Closes, Drone Snack Delivery Arrives In The Suburbs And So Much More!

Where there’s smoke, there’s fire — and, every four years, Texas Monthly barbecue editor Daniel Vaughn does his part to set foodies around the state ablaze by dropping the magazine’s rankings of the top 50 barbecue spots in all of Texas.

That was certainly the case this week, as Vaughn and his 35-person team of taste-testers dropped their 2021 barbecue rankings which arrived complete with more than just a handful of surprises.

The biggest of all, though? Turns out, the best barbecue in all of Texas — and, thus, the world — comes from North Texas, and from a place that just opened up in February of last year. According to Vaughn, you won’t find any barbecue better than what they’re cooking up and slinging out at Fort Worth’s Goldee’s Barbecue. It’s an embarrassment of riches in these parts, really, as Dallas’ Cattleack Barbeque also placed at No. 6 in the rankings, and Fort Worth’s Panther City BBQ.

A number of other regional entities additionally showed up in the non-ranked 11 through 50 positions of Vaughn’s Top 50 — including three more from Dallas (Slow Bone, Smokey Joe’s BBQ and Terry Black’s Barbecue), two more from Fort Worth (Dayne’s Craft Barbecue and Smoke-A-Holics BBQ) and one apiece from Arlington (Hurtado Barbecue), Frisco (Hutchins BBQ) and Grand Prairie (Zavala’s Barbecue).

Congrats to each of the honored spots!

Speaking of milestones in barbecue, the Dallas Morning News this week has a cool profile on Dickey’s Barbecue Pit — and, specifically, its original location that currently sits at 4610 N. Central Expressway, even though the Central Expressway wasn’t even built when it opened back in 1941. Now in its 80th year in operations, the restaurant chain, which now claims more than 1,000 locations, says this original spot is the older continuously operating restaurant in the state.

Speaking of longstanding traditions, the State Fair of Texas may be over, but the legend of its food is still spreading. New-to-Dallas food YouTuber Mikey Chen uploaded to his Strictly Dumpling channel this week a recap of all the fried foods he ate at this year’s event. Check out his thoughts on the gluttonous indulgences below:

Alas, the 2021 State Fair of Texas‘ run isn’t the only thing to have come to an end recently. A video uploaded to Twitter showed a text chain from the wait staff at the popular Uptown restaurant and nightclub Harris’ House of Heroes finding out that their employer had abruptly decided to close shop — a move further confirmed by the sudden disappearance of the business’ once-very-active Instagram page.

On the other hand, we now know for sure that Oak Cliff’s beloved neighborhood bar and restaurant Ten Bells Tavern will live on after it was revealed that construction plans were going to be booting them from their current home. This week, bar owner Meri Dahlke shared to various social channels of her business’ future home — a converted duplex located on 8th Street, mere spitting distance away from the original location.

It’s cool to know news before it breaks, right? Well, if that’s your jam, then you’ll dig Off The Menu Club, an iPhone-exclusive app that, for $20 a month, provides its users with a weekly list of secret items being served at local restaurants. Some of these items include a Dirty Bird from Taco Wasted and a Gruyere souffle from RM 12:20 Bistro, as noted by the Dallas Observer. To celebrate Off The Menu Club’s Dallas-Fort Worth launch, Deep Ellum Distillery will host New York City-favorite Prince Street Pizza in the form of a pop-up from Thursday through Halloween.

Also arriving in Dallas from a long distance is Surfin’ Chicken, an Americanized version of Croatian French fry joint, Surf’N’Fries. Per CultureMap, Surf’N’Fries’ U.S. president of operations Carrie Sam wanted to include fried chicken on the menu, as the word surf is often associated with seafood. At their Walmart kiosk spot in Garland, Surfin’ Chicken diners can now enjoy wedge fries with a variety of toppings, including chili, pulled pork, or even salmon or fried shrimp. Hell, I mean, the fair is over, so where else are we going to get this amount of excess?

Speaking of extra: Remember that “big dumb SUV” that ran into Rush Patisserie this past May? Alas, owner Samantha Rush was unable to salvage Rush’s storefront. But Rush and her Trailercakes brand are making lemonade out of lemons, pivoting to a custom/order-only business operating out of a commissary kitchen near the original store, per the Dallas Morning News. Fans of Rush’s baking can enjoy favorites like her butter croissants and pain au chocolat, as well as Trailercakes favorites, like the Cookie Monster cupcake and the Slap Your Momma Chocolate. Talk about a slapper there!

On that vegan note, two McDonald’s locations in Irving and Carrollton will be testing out the brand’s McPlant burger beginning next month. Dallas-Fort Worth is one of four markets to test the McPlant burger, which was developed by McDonald’s in partnership with Beyond Meat, CultureMap reports. As for us? We’ll stick to the Impossible burger at Uncle Uber’s in Deep Ellum for now.

Or, if we’re looking for another kind of drive-through experience, we’ll head up to the new McKinney spot Salomy from husband-wife duo Appolo Kamdem and Salomay Fayorsey. Here, the Dallas Morning News notes, couple will offer a variety of crepes — from sweet Nutella-and-strawberries crepes to the savory crepes featuring h roasted chicken, sautéed mushrooms and caramelized onions.

Or maybe we’ll just stay at home and let drones bring us our food. That’s about to be the reality in the North Texas communities of Frisco and Little Elm soon enough, actually. According to the Dallas Morning News, Walgreen’s and Google‘s Wing company are teaming up to pilot their new drone delivery initiatives in these suburban cities, starting with things like snacks and toiletries.

The future has truly arrived, hasn’t it?