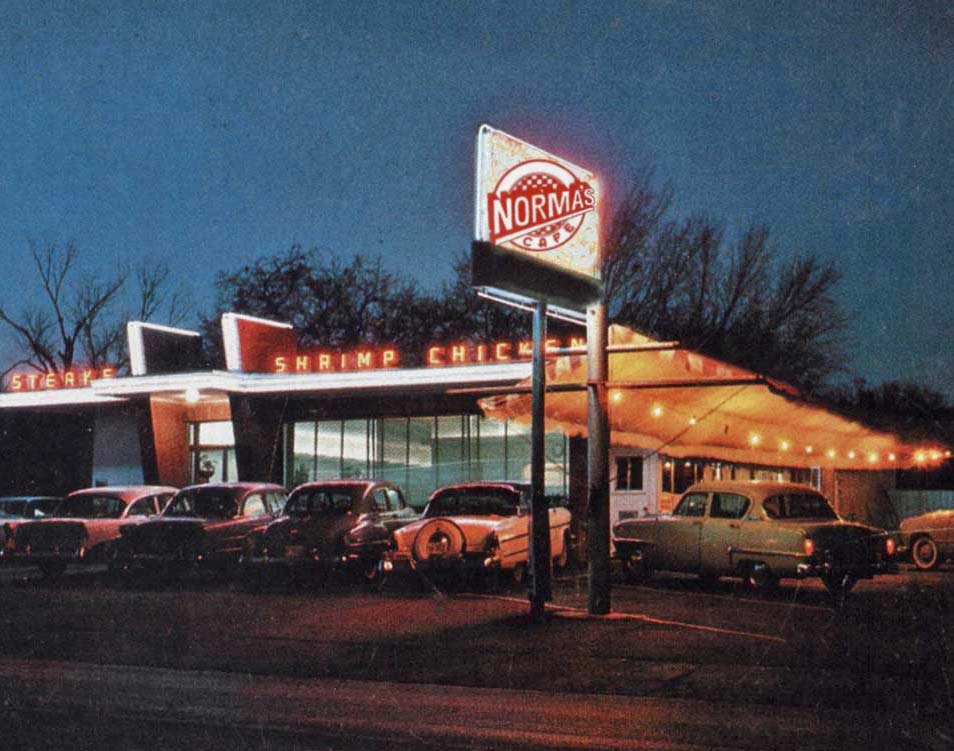 These days, diners all across North Texas are familiar with the comfort food homestyle cooking of Norma’s Café, which currently boasts five locations across the region.

But the Norma’s story starts a full 65 years ago, actually. Yes, it was all the way back in June of 1956 that the first location of the highly regarded local chain began serving Oak Cliff residents out of its 1123 W. Davis Street address.

The times, they sure have changed. Back then, a Norma’s chicken fried steak dinner cost less than $2, and while that same dish will normally run you $11.49 these days, dine-in guests will soon be able to visit any of the restaurant’s five locations and enjoy a meal at those Day One prices. To celebrate its 65th birthday, diners can order their choice of three of Norma’s blue plate specials — chicken fried steak, chicken and dressing or meatloaf (each served with mashed potatoes and green beans) — for just $1.79 on June 23, while supplies last.

Even better? A portion of its sales will be given the Dallas-based nonprofit the Birthday Party Project, which helps bring the magic of birthday celebrations to children experiencing homelessness.

Sure, we may use this column to mostly highlight new restaurant openings, but there really is something to be said about classic Dallas establishments like Norma’s that have stood the test of time and keep drawing in the crowds.

That said, there is a lot going on this week in terms of new spots that are on the way.

First up, there’s the long-in-the-works Asian smokehouse Loro, which has finally set an opening date. The highly anticipated collaboration between Aaron Franklin of Austin’s beloved Franklin Barbecue and acclaimed Uchi chef Tyson Cole, will officially open for business at 1812 Haskell Avenue on July 5. This East Dallas location will be Loro’s second in Texas, with the first arriving in Austin back in 2018 and a third one in the works for Houston down the line. But, as Eater notes, diners can still expect a number of Dallas-only dishes at this spot, courtesy of chef de cuisine Mike Perez, who is being tasked with running the kitchen. In addition to Austin favorites like sesame rice noodles with chili vinaigrette and chicken karaage, the Dallas-specific options include a coconut-scented rice with chopped brisket and fried peanuts, a French onion brisket melt and a fish-and-chips option. Loro will also serve up boozy slushies and cocktails, including a Thai watermelon punch that is arriving just in time for summer heat. Oh, and early birds will indeed catch Loro’s worm, as happy hour at the bar will run from 2 p.m. to 5 p.m.

Speaking of a boozy summer: The Pop Parlor just opened up in Frisco, and fans of Deep Ellum’s Picolé Pops will enjoy this Florida-based ice-pop joint for its added alcoholic twist. As Eater notes, The Pop Parlor is known for its cool, fruity popsicles, such as the pineapple passionfruit and watermelon mint pop, but its boozy pops are just as appetizing. The cucumber jalapeno margarita, passionfruit mimosa, Riesling pear and mango mimosa will give you that extra kick if you’re really feeling yourself this summer. Not feeling like a popsicle? No worries. The shop also sells espresso and drinks — because you can never have too many coffee spots.

East Dallas obviously agrees with that sentiment! As the Dallas Morning News reports, a third LDU Coffee location is opening up this August, with this new location arriving right next to Hypnotic Donuts near White Rock Lake. One thing you won’t get at LDU Coffee, though, is wifi. In fact, in a move meant prevent itself from looking like a workspace, none of the LDU Coffee shops in town have wifi at all. It’s just another way that the company’s Australian co-owners and brothers Adam and Mark Lowes have shaped the laidback vibes of their brand, which sells more flat white espresso drinks than anything else.

Turns out, the Lowes aren’t the only brothers making headlines this week. We can’t talk about this week’s food news without mentioning the current Hawaiian food explosion North Texas right now. After giving away free meals last week, PaperCity reports that the fast-casual Hawaiian comfort food joint Hawaiian Bros. opened itself up for full service in Denton this week. And, turns out, it’s just the first location of many to come. Co-owned by Cameron and Tyler McNie, two brothers from Oregon who fell in love with Hawaiian food and culture, the company will be opening additional locations in Alliance, Hurst and Fort Worth as the summer goes on. As for what to expect? Well, each plate here contains a choice of meat (like slow-roasted pulled pork or marinated teriyaki chicken), plus a side of jasmine rice and tangy macaroni salad. You can also get the brothers’ signature dishes — Huli Huli Chicken, Molokai Chicken and Honolulu Chicken and Luau Pig — and Spam Masubu as a side dish. One more note: The kitchens here are free of freezers, fryers and microwaves, so all food will be freshly made.

Speaking of fresh things: Though he’s long been known for his beloved Italian cuisine, Dallas chef Julian Barsotti is switching things up with a new Tex-Mex restaurant opening this year. Eater reports that this new concept called Odelay will be an expansion of the ‘Ritas & Queso ghost restaurant concept that Barsotti launched during the pandemic. Expect Tex-Mex classics like gorditas, cheese enchiladas and brisket tacos.

Oh, and that’s not all Barsotti has planned for this year: In addition to his other Italian restaurants Nonna, Sprezza, Carbone’s and Fachini, he plans to open a fifth Italian spot in Dallas soon. Called Bacari Tabu, this new concept will open next to Nonna and serve pizza and Venetian-style tapas — and if they’re even half as good as Fachini’s 100-layer lasagna, then we’ll be stoked as hell.

Lastly this week, the Dallas Morning News notes that the popular Quadrangle breakfast and brunch spot Dream Café is getting bulldozed and redeveloped after 33 years at its location. But it’s note going away completely: The restaurant will soon be opening up a new location at 2811 McKinney Avenue — complete with a new front patio, a back courtyard and even below-ground parking.

Change can be an invigorating thing sometimes!

Cover photo via Norma’s Cafe. Got a tip for The Spread? Email us!