The Coors Light Waterfall On I-35E Is (Kinda) Gone! 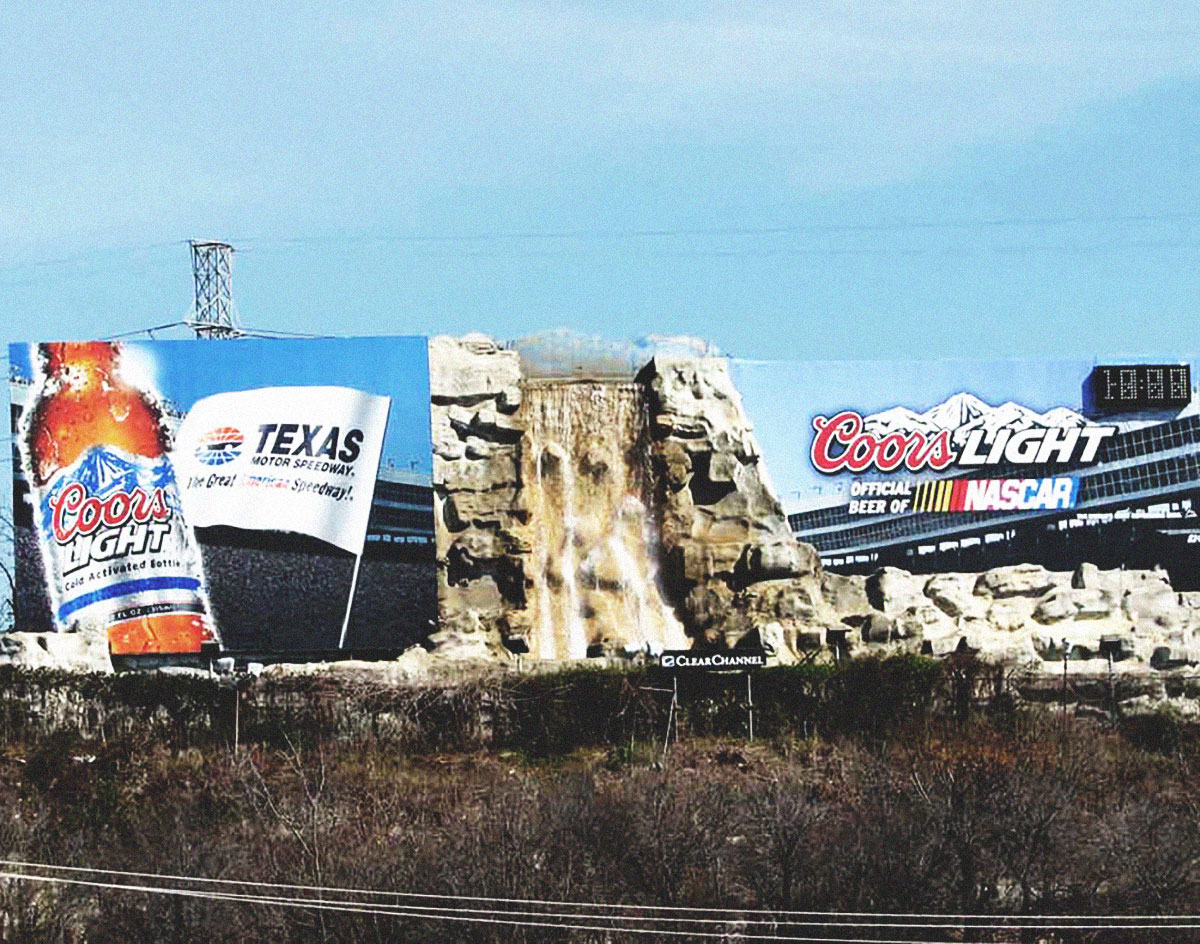 The Landmark I-35E Billboard Might Look Unfamiliar To Dallasites Who Recognize It As The Coors Light Waterfall — But It’s Still Technically A Coors Ad.

Update at 9 p.m. on May 26, 2020: Since publishing this story this morning, it has come to our attention that the billboard is now back to being a Coors Light ad, its time as a Vizzy promotion short-lived.

We haven’t been leaving the house much, and we regret the error — although we are glad to have some normalcy restored to the universe.

If you have driven on I-35E near Downtown Dallas recently, you might have noticed something amiss: Everyone’s favorite Coors Light waterfall billboard has been swapped out for an advertisement for something called Vizzy.

Before you start your petitions and draft your Facebook eulogies, though, you should know the new campaign is technically still a Coors one: Vizzy is Molson Coors’ answer to the booming hard seltzer market.

So the famous Coors waterfall billboard in Dallas is now a Coors seltzer waterfall?
This is why the apocalypse sucks.
Not cool Dallas, Not Cool… 😠 pic.twitter.com/UfuMmFBVPt

Described as “the only hard seltzer made with antioxidant Vitamin C from superfruit, acerola cherry,” Vizzy claims to set itself apart from the increasingly crowded market with antioxidant levels that boast more Vitamin C per cup than an orange.

It’s a commendable attempt to make you feel better about throwing them back like La Croix, we guess.

How is no one else sad that the Coors waterfall billboard in Dallas changed??
What’s next? Change the Winstar one to Choctaw? 🤦🏻‍♀️

Back to the billboard: Those who know it as the Coors waterfall might be disappointed further in learning the Dallas staple wasn’t always a Coors billboard, either.

First constructed in 1962 and now owned by Clear Channel Communications, the waterfall made its debut as an ad for the no-longer-defunct, San Antonio-launched Pearl Beer. This was followed by campaigns for cigarettes, vodka and more before Coors eventually took hold of it in the ’90s — back when Baby Doe’s Matchless Mine restaurant still resided behind it as opposed to the high-rise apartments of today.

Basically: Your whole life is a lie.

The good news, we suppose, is that no matter what graces the waterfall’s placard these days or into the future, the fixture itself is not going anywhere. In 2007, the City of Dallas designated it an “extraordinary significant sign,” guaranteeing its protection.