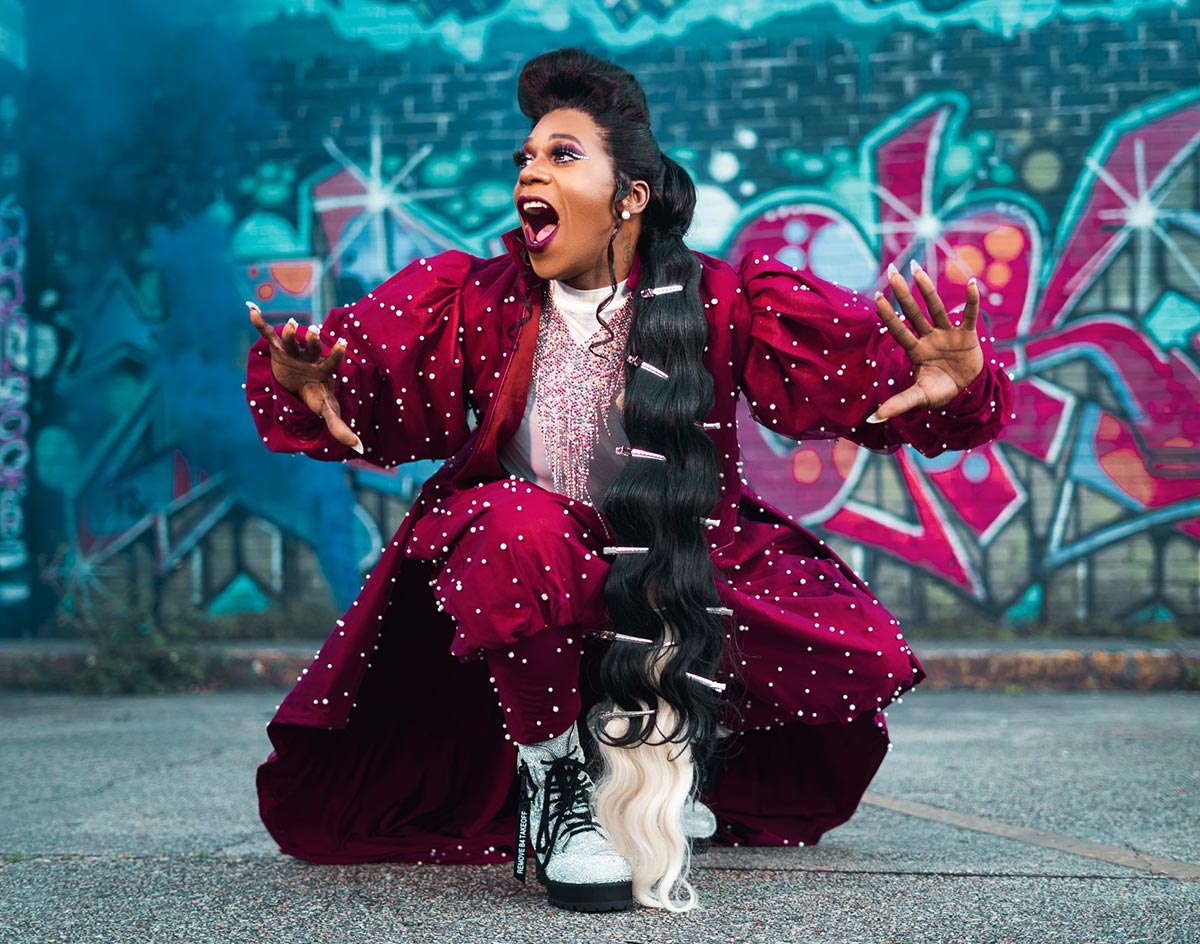 This Week In Dallas, You Can Float On, Put Some Bounce In Your Step, Pay Your Respects To RBG And Run Like Hell From Longhorns And Sooners. Plus More!

It’s finally October, everyone! In other words: We’ve official hit the most wonderful time of the year.

To celebrate the start of spooky season, we thought we’d kick off this collection of top Dallas-area happenings this week with a handful of underrated, creepy-sounding songs that will fit right into your Halloween playlists. Why? Because, frankly, society as a whole needs to get more creative with Halloween music.

So, before we get into this week’s rundown, here’s a list of 10 songs to rock out to this month that aren’t “Thriller” or “Monster Mash” or some other over-played song of the season:

ZZ Top at Dickies Arena (Fort Worth)
Part of the venue’s 2021 Legends Concert Series, this show will benefit The University of North Texas Health Science Center at Fort Worth. The performance will also serve as a space to pay tribute to the band’s late bassist, the Dallas native Dusty Hill, who passed away at age 72 back on July 28.

Band of Horses and Robert Ellis at House of Blues
The Seattle-bred indie group makes the perfect soundtrack for taking a barefoot stroll through a foggy forest. Before living your cottage core fantasy, though, slip into something more jazzier with Fort Worth singer-songwriter Robert Ellis — and enjoy a Topo Chico while you’re at it.

Manchester Orchestra at Amplified Live
This Atlanta (not Manchester) indie rock band just released its latest album, The Million Masks of God, this past spring, and it’s full of dark introspection that’s softened by many moments of hope. If you haven’t kept up with this group’s releases, you may have heard their music in the 2016 film, Swiss Army Man, for which they did the entire score.

Flogging Molly, Violent Femmes, Me First & The Gimme Gimmes and Thick at Southside Ballroom
Just a couple of genre icons sharing top billing atop this tour offering, no big deal! Pick your poison: “Drunken Lullabies” or “Blister in The Sun”?

Bob Mould at Granada Theater
Mould has been rocking since the early ’80s, when he co-founded the acclaimed punk outfit Hüster Dü. Since then, he’s mainly flown solo as a singer-songwriter, with the exception of two albums from another one of his bands, Sugar. Recently, he revisited the Hüster Dü hit “I Apologize” with the musical efforts of comedian Fred Armisen.

John Legend at Texas Trust CU Theatre (Grand Prairie)
The pop artist, The Voice judge and EGOT winner will be in Grand Praire for his “Bigger Love” tour. In addition to his music career, Legend is also an activist, having just announced the launch of HUMANLEVEL, an initiative  meantto benefit communities feeling the effects of institutionalized racism. Fittingly, his 2020 Bigger Love album is filled with songs that were penned in response to the killing of George Floyd.

Wavves at Amplified Live
Get transported to the California coast and live your new life as a beach bum. Frontman Nathan Williams has been a prominent figure in music gossip for the past few years, whether it’s through his banning Trump supporters from Wavves shows or being criticized for his passive job as a landlord.

Torres at Deep Ellum Art Co.
Influenced by Stevie Knicks and musical theatre, Torres knows how to up the dramatics at her live shows. Her 2021 album  Thirstier came 18 months after 2020’s Silver Tongue, and both have been met with acclaim. Also, both albums feature cover art of Torres’ likeness as painted by her girlfriend, Jenna Gribbon.

Modest Mouse and Future Islands at The Pavilion at Toyota Music Factory (Irving)
Let the good times kill you with this dynamic indie pairing. Longtime rockers Modest Mouse just dropped their newest album The Golden Casket, while special guest Future Islands just released a new single called “Peach.” Also, I’m super jealous of whoever is going to this one, as Modest Mouse is my favorite band of all time.

Big Freedia at Granada Theater
This larger-than-life artist is truly a pioneer for being one of the definitive acts to help bounce music blossom outside of it’s home of New Orleans. She’s collaborated through the years with Lizzo, Beyoncé, New Kids on The Block and RuPaul, and has been sampled by Drake and Beyonce. She was also the subject of her own Fuse reality series, Big Freedia: Queen of Bounce.

Ruth Bader Ginsburg Concert at Dallas Symphony Orchestra
The Dallas Symphony Orchestra is paying tribute to the late and great Ruth Bader Ginsburg a year after her passing last September. In addition to being a Supreme Court Justice, RBG was also passionate of classical music. This concert will feature the world premier of brand new material from composer Ellen Taaffe Zwilich, the first woman to win the Pulitzer Prize in music.

Flatland Cavalry at Lava Cantina (The Colony)
These cowboys are sending in the cavalry and bringing you a blend of folk-country-Americana in the process. Can’t make this show? The Colony isn’t the band’s only stop in Texas on this tour. Catch them in five other cities across the state over the next few days — including their hometown of Lubbock.

Lake Street Dive at The Factory in Deep Ellum
The band says they “epitomize democracy” because of their genre-blending. In turn, you’ll get elements of indie, jazz, country, soul and folk in their music — all snippets that reveal the taste and upbringing of every member of the quartet, who have all been proficient in music in childhood.

Joshua Ray Walker at Granada Theater
The beloved Dallas country musician is debuting his new album in the only city that would make sense. As much as he gets accolades for being unafraid to get emotionally vulnerable in his lyrics, the dude’s also got a great sense of humor. Need proof? Just check out his country cover of Lionel Richie’s “Hello,” which comes complete with a shot-for-shot iPhone remake of the original music video.

Rival Sons at House of Blues
The blues rock band will be right at home at this venue. Expect powerful vocals and guitar riffs from this group that’s become an undeniable force in modern rock. In 2020, for instance, the group’s Feral Bones LP secured a Grammy nomination for best rock album.

Borgore at Stereo Live
Hailing from Isreal, Yosef Asaf Borger does it all. He’s an EDM producer, DJ, rapper, singer and multi-instrumentalist who takes a page out of the book of just about every genre out there for his own music. He also has his own music label, Buygore Records. He also just released his latest single, “I Don’t Care.”

Red River Showdown at Cotton Bowl
Woo, sports! It’s that time of the year where the historic Texas and Oklahoma football rivals once again square off here in Dallas. Last year was the highest scoring game in history — with the win going to Oklahoma.

Rick Ross, Jeezy, Gucci Mane, 2Chainz, Fabolous, Boozie Badazz and DJ Drama at American Airlines Center
This “Legendz of the Streetz Tour” lineup is absolutely stacked. So, no, they’re not throwing around the term “legends” for nothing. See all of these hip-hop heavyweights under one roof – including onetime rivals Gucci Mane and Jeezy as a pleasant surprise.

Metalachi at Trees
Metal plus mariachi equals Metalachi. Yes, it’s exactly what it sounds like — a mariachi group that covers classic metal and rock n roll songs — and you need it in your life. Besides having some of the best onstage outfits you’ve ever laid eyes on, Metalachi also intercuts its setlists with comedic breaks. There’s also an element of comedy and tons of fun within their act, but the level of musical prowess is astonishing.

Hunny at Dada
This dance-y and dreamy indie outfit has released three singles so far this year. “Daydreams/Heartbreaks,” “Xbox Luvr” and “Sports With Strangers” all have taken an agnsty pop-punk turn, which is a slight departure from the band’s previous indie-dream-pop vibe. But don’t worry; you can still dance around your room to it.