Tensions Flare Over Encampments: All Eyes Are On OHS. 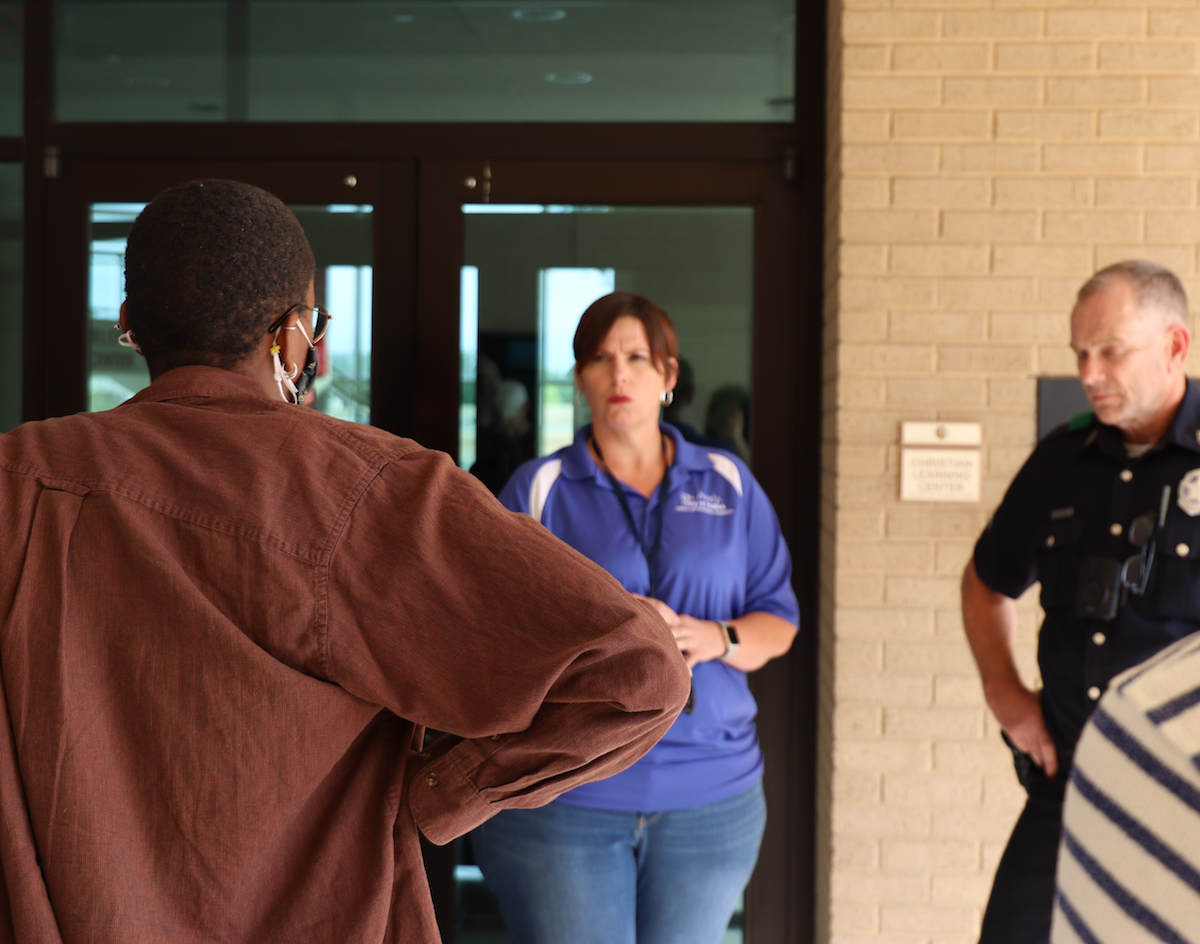 Dallas’ Office of Homeless Solutions (OHS) has been busy, to say the least. The OHS has conducted seven homeless encampment sweeps in Dallas including one on May 19 in District 11, North Dallas.

With a rise in resident complaints and concerns about encampments, OHS director Christine Crossley says more may be on the horizon.

“We as a city are coming from a place where we do not want to do sweeps,” Crossley says. “I know that there are those who will say, ‘Well, you’re doing them anyway.’ We don’t live in a perfect world. What we do want to do is house everyone sustainably and so we have the Dallas Real Time Rapid Rehousing Initiative.”

Sweeps occur when an encampment is deemed unsafe by means of violence or evidence of weapons. Crossley says at that point OHS must intervene. The city aims to give encampment residents a 72 hour notice to gather their belongings and leave the site before cleanup crews arrive and remove remaining belongings.

There are 4,410 individuals experiencing homelessness in Dallas and Collin counties, according to the Metro Dallas Homeless Alliance (MDHA).

Since September 2021, MDHA says DRTRR has enrolled 1,304 individuals in the initiative. Enrollments are tracked on a community dashboard.

District 11’s council person, Jaynie Schultz, was on site for the May 19 sweep and addressed constituents’ concerns about the IH-635 and Hillcrest underpass encampment through an Instagram post. Schultz shared that the camp had been “cleanedup” and confirmed other “cleanups” were to come.

The response wasn’t quite what we imagine Schultz expected. Instagram users commented calling the post “repulsive,” “dehumanizing” and “disgraceful.”

“I could have been much more sensitive. It was an insensitive remark that I wish I could take back honestly,” Schultz says. “With that being said, because of the danger in that area that the neighbors were in, in terms of the fires, the gunshots, peeping toms, I really needed to take a very strong action about that, but the comment itself is absolutely insensitive.”

At a May 24 District 11 neighborhood meeting hosted by Schultz and OHS, constituents voiced concerns over alleged fires, gunshots, peeping toms and vandalism. Some went as far as to make a cry for the city to “lock them up.” Fear penetrated the room.

“Part of this is trying to demystify the fear of the unknown … we have a lot of issues with violence visited upon a vulnerable community,” Crossley said to attendees. “… It’s very easy to say that that is the population causing the issues, but actually that is the population that attracts the issues because people know that they are easy to take advantage of.”

Mutual aid activists, who have been at the forefront of support and relationship development with the growing houseless community, have voiced concern about OHS’ ability to stay true to the promise of safely and humanely housing encampment communities. 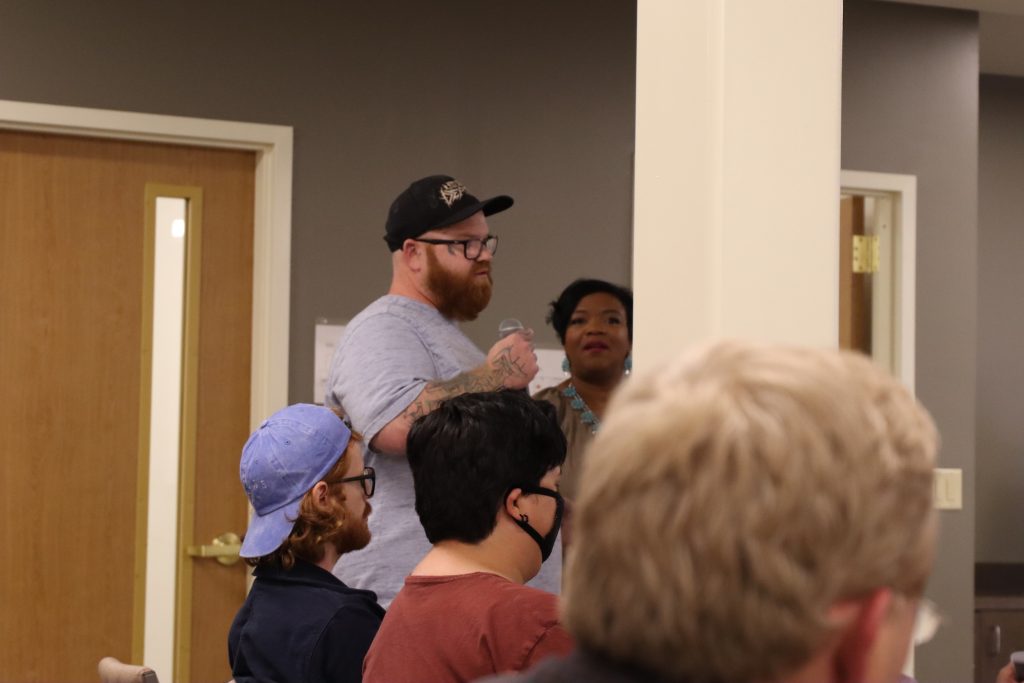 Earlier this year, Danielle Carty, organizer of Say It With Your Chest DTX, a mutual aid that supplies the houseless with laundry services, met with OHS from an encampment site. Carty allowed the encampment residents to speak to Crossley as opposed to speaking for them.

“When I put them on the phone the overall concern was, ‘Y’all don’t come out here and do anything. You’re wasting taxpayer money and what you need to do is house people like you said you would,” Carty says. “People don’t want to go with [OHS] because you keep lying and all you have is police presence and we don’t need that. That doesn’t make us feel safe.” 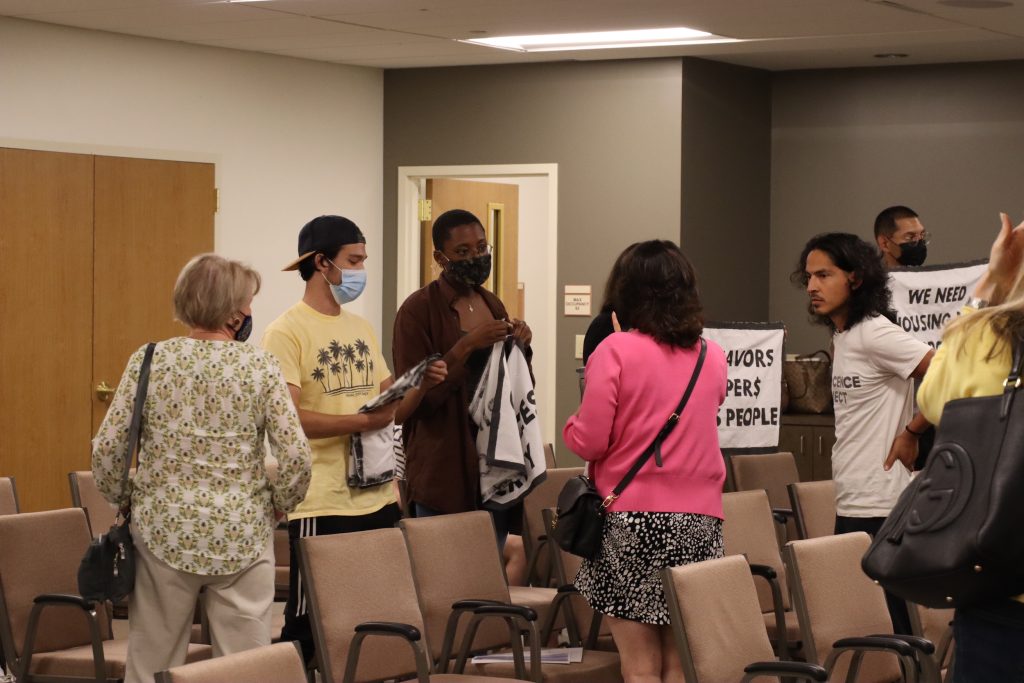 “It is very traumatic,” Tanner Ka, Dallas Sandwich Sunday organizer, says. “They throw away all their stuff. They have an older dog, we just got dog vet meds and it was thrown away. There’s another gentleman there that’s a type one diabetic and we had just got them insulin, it was like $170 worth of insulin, and they threw that away, they wouldn’t let them get it. We had to rebuy all that stuff.”

Medical records and identification cards were thrown away as well, according Ka. The sweeps add strain to the already limited resources available to mutual aids who function primarily off of donations. Once displaced, individuals must once again find temporary residence and begin to rebuild from nothing.

The individuals at the IH-635 and Hillcrest underpass have experienced this displacement twice. Many resided in Valley View Park which was swept earlier this year. Now the underpass has been swept and mutual aid activists have no method to find the individuals.

At closing, Carty along with other activists stood in solidarity with the houseless and raised flags stating, “Dallas does sweeps not cleanups,” “Dallas favors developers over it’s people,” “Dallas criminalizes poverty” and “We need housing not new properties.” 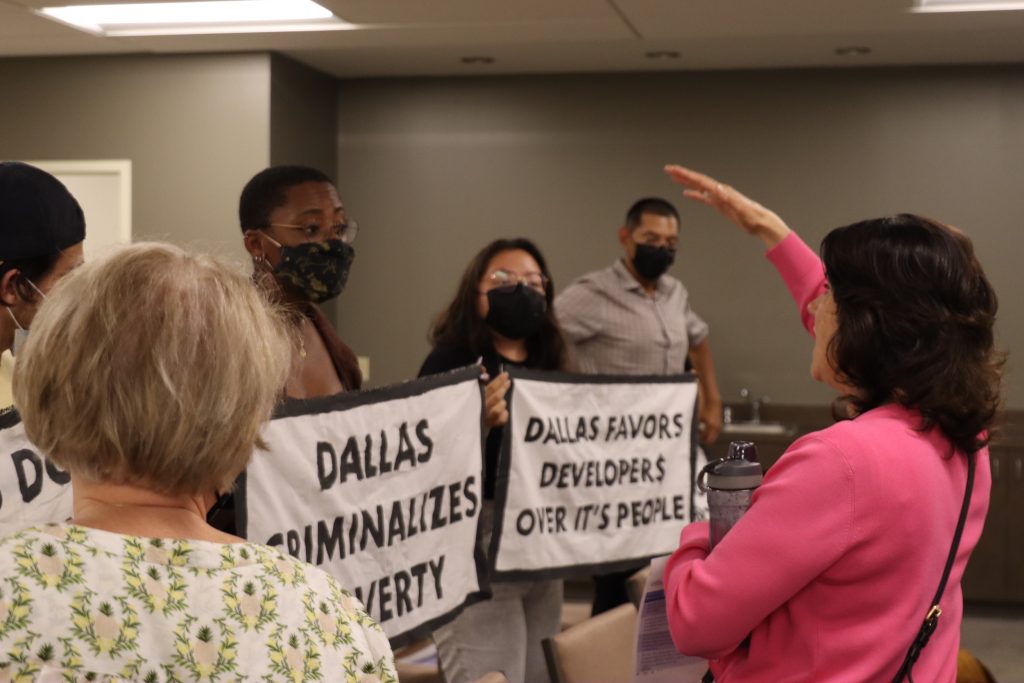 “Let me help you help them,” Ka said to OHS. “I have a rapport with them and we’d be more than happy to facilitate that with them if we don’t bring them trauma.” 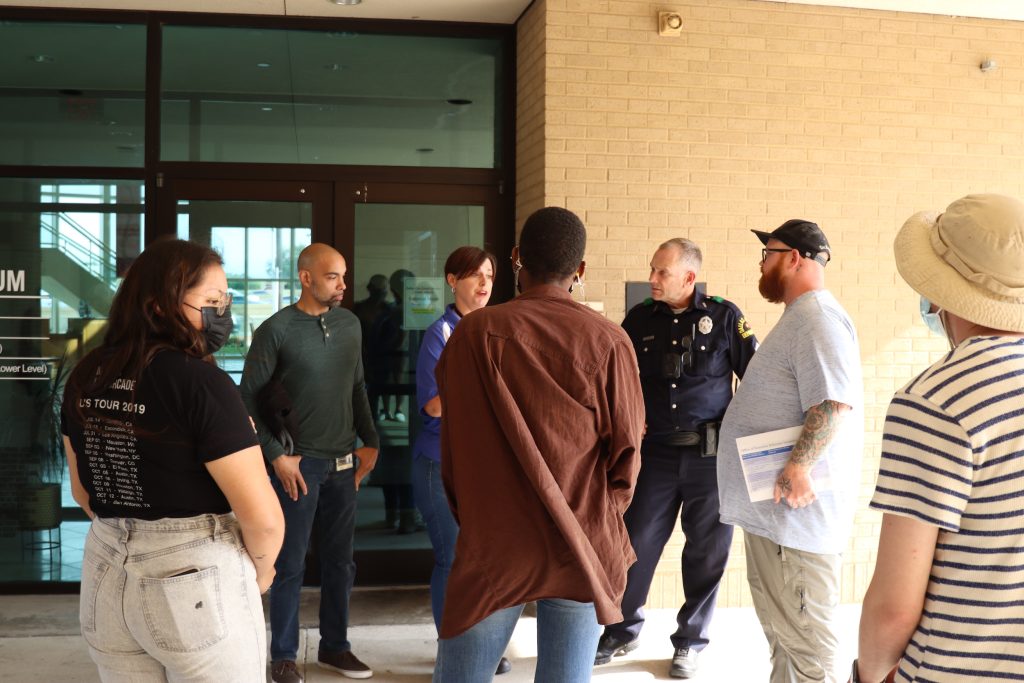