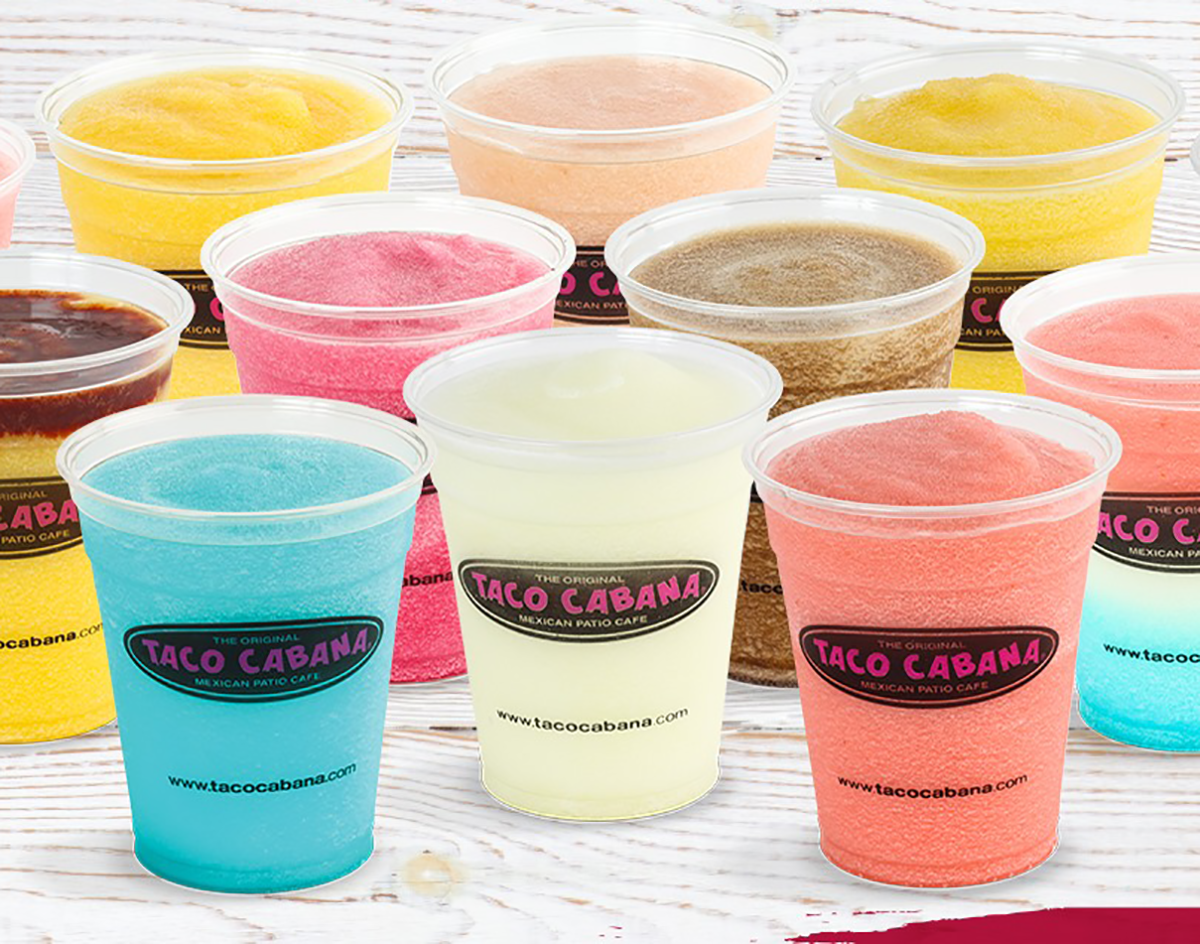 We Ordered All 12 Of The Texas-Founded Chain’s Newly Launched To-Go Margarita Flavors In One Sitting. This Is What We Thought.

In true-to-Texas fashion, Gov. Greg Abbott announced on March 18 that instead of issuing a statewide shelter-in-place or mandatory mask order, he would allow to-go alcohol sales from businesses with mixed beverage licenses, among other things. Then, in true Greg Abbott fashion, he flip-flopped on it a couple times.

As bars are reeling from a second shut down, and restaurants remain limited to 50 percent capacity dining, Texas’ own Taco Cabana is currently taking advantage of the situation by hustling 12 varieties of $2 frozen margaritas.

Having absolutely nothing else to safely do on a Sunday afternoon, we decided to selflessly do the groundwork in tasting all 12 of them for you.

First things first: Don’t make the mistake of trying to drink all of these in one go. It won’t end well. With the exception of the Strawberry and Lime Margaritas, all of these have a heavy syrup base, and attempting to drink them as some sort of challenge is not only inadvisable from an alcohol consumption standpoint, but just downright intolerable due to sugar consumption .

To be clear, Taco Cabana will not sell you alcohol unless you also buy food as well, but after that, all bets are off. Hello, yes we’d like a three pack of flautas with queso and also 12 margaritas — yes, one of each, please.

In the interest of full disclosure, we should note the following: Our first mistake upon getting this huge order of margaritas was not labeling them as they came. Unfortunately, this led to some trial and error in trying to identify exactly which  margarita was which, but trust us when we say that if the headache the morning after was any indication, we managed to accurately identify them after drunkenly going through photos and taking a sharpie to half-full cups of Taco Cabana’s finest.

Our second mistake, and this is one you should take to heart, was going through these margaritas as Taco Cabana intended: using the default Margaritaville tequila. Unless doing so as an act of penance, we do not recommend this at all — imagine drinking agave-flavored jet fuel.

Considering we’re still very much in the midst of a pandemic, there’s certainly worse ways to punish the liver for the sins of the state, but if you can swing it, opt for the Cuervo or Sauza. You’ll thank us the morning after. 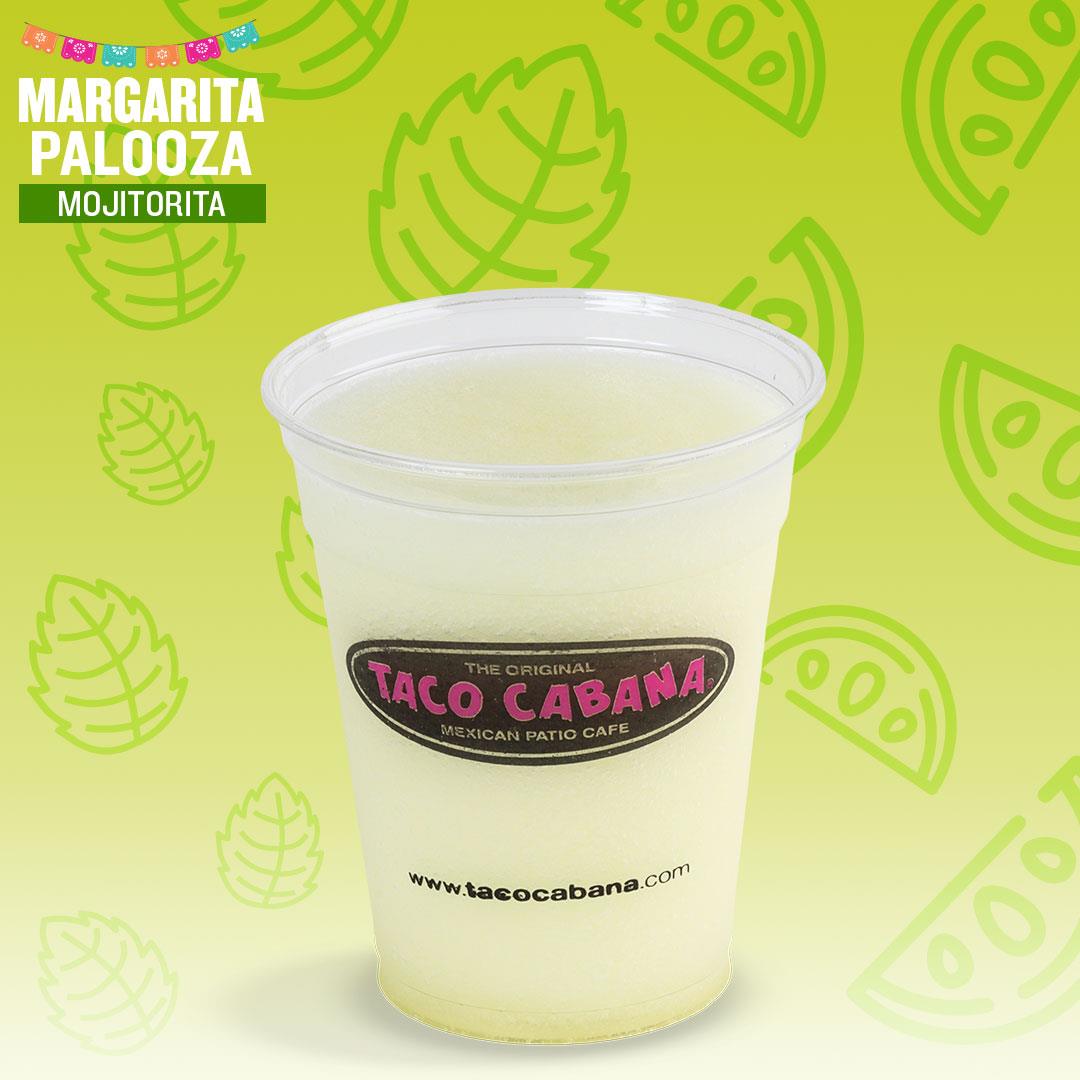 This is more mojito-ish. If we handed this to someone and neglected to tell them what exactly they were drinking, we could probably get away with saying this came from any daiquiri-to-go location. Could we drink it? Sure. But if you’re at Taco Cabana and you’re just looking to get the job done, the Mojitorita delivers on that end. 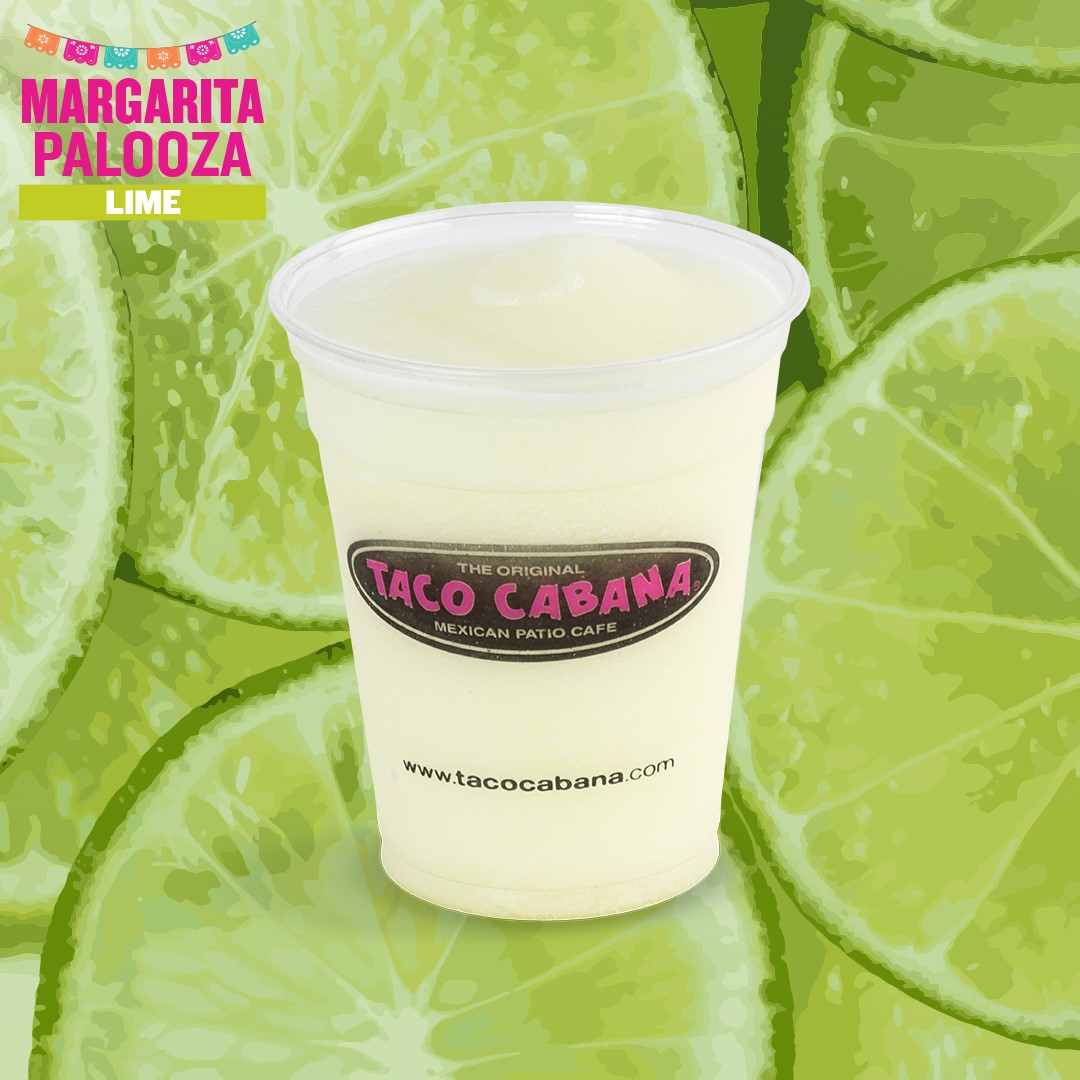 We’re almost fairly certain we’ve have had this at the Truck Yard. When you picture a run-of-the-mill bar margarita, this is almost certainly what your tastebuds will recall. It’s good stuff, and will almost certainly get you to that buzz you’re probably trying to get to without any issues, which is likely due to the fact it doesn’t have anything added to it. The core of the margarita flavors listed here is actually just a big pump of syrup, so this, as well as the strawberry margarita, are the pick of the litter when you’re trying to keep the sugar intake reasonably low. 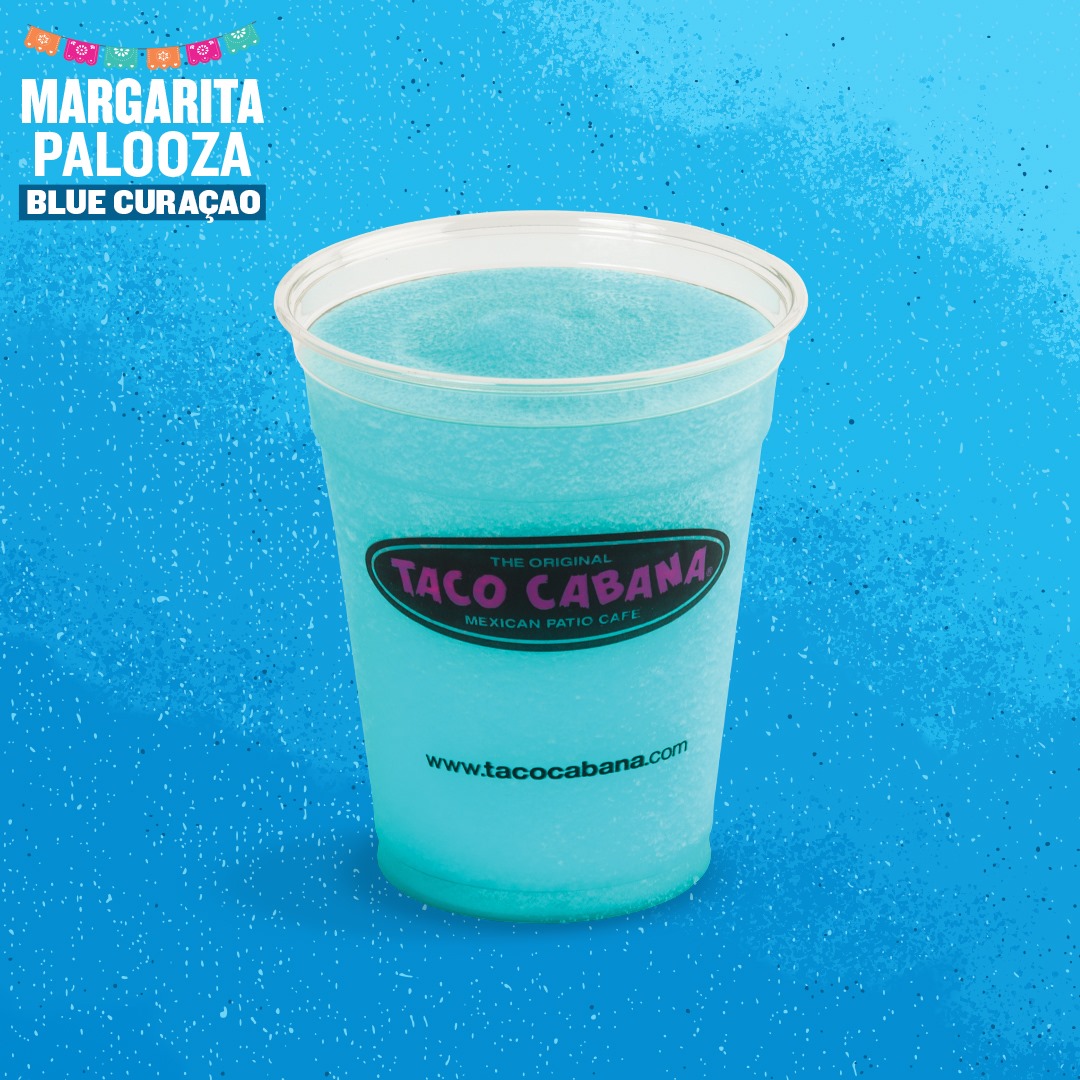 Anyone whose entire experience with curaçao — blue or otherwise — comes from being 21 years old and crawling in Denton bars, like us, has likely also become intimately acquainted with the art of waking up and hating yourself. For better or or worse, this margarita is giving us Fry Street flashbacks. Curaçao has a distinctly bittersweet flavor, none of which is found in Taco Cabana’s rendition of the Blue Curaçao Margarita. Strangely enough, that actually makes it a much more accurate comparison to the sorority classic, as most places that serve up a cup of blue whatever will not use real Blue Curaçao but rather a sort of knockoff. We are neither 21 anymore nor in a rush to enter into a diabetic coma trying to recreate those years, but hey, you do you. 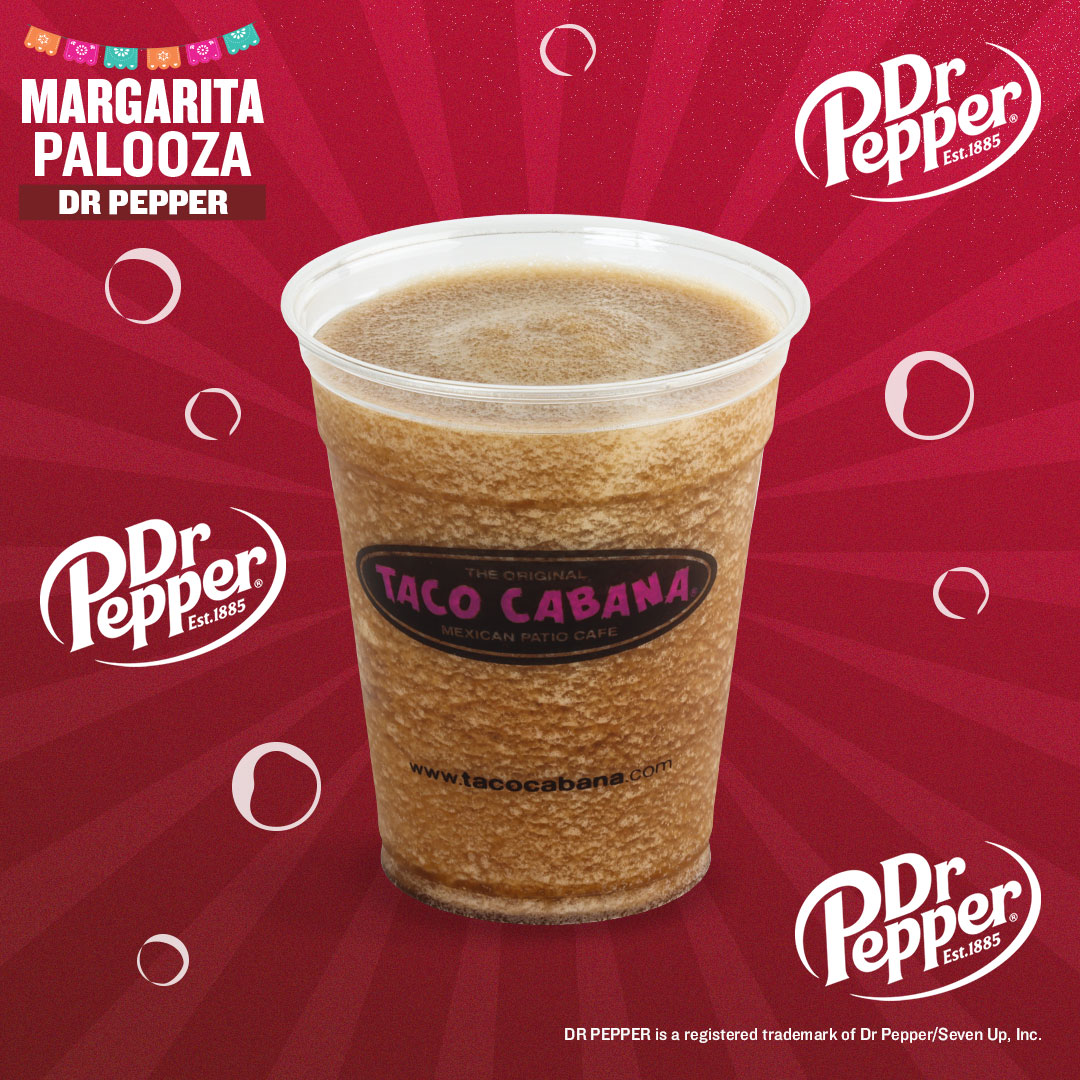 Dr. Pepper and agave-based liquors have no business being near each other like this. Whoever thought this was a good idea needs to be fired. We’re not actually sure that any Dr. Pepper syrup went into this, but if it did, the addition to the margarita base made it taste more like a root beer than anything. When you decide to add Taco Cabana’s Margaritaville shots into it, this one becomes wholly unpleasant. Only the most devout of Dr. Pepper fanatics could reasonably stomach this. Normal people would be much better served with sobriety. Yes, it’s that bad. 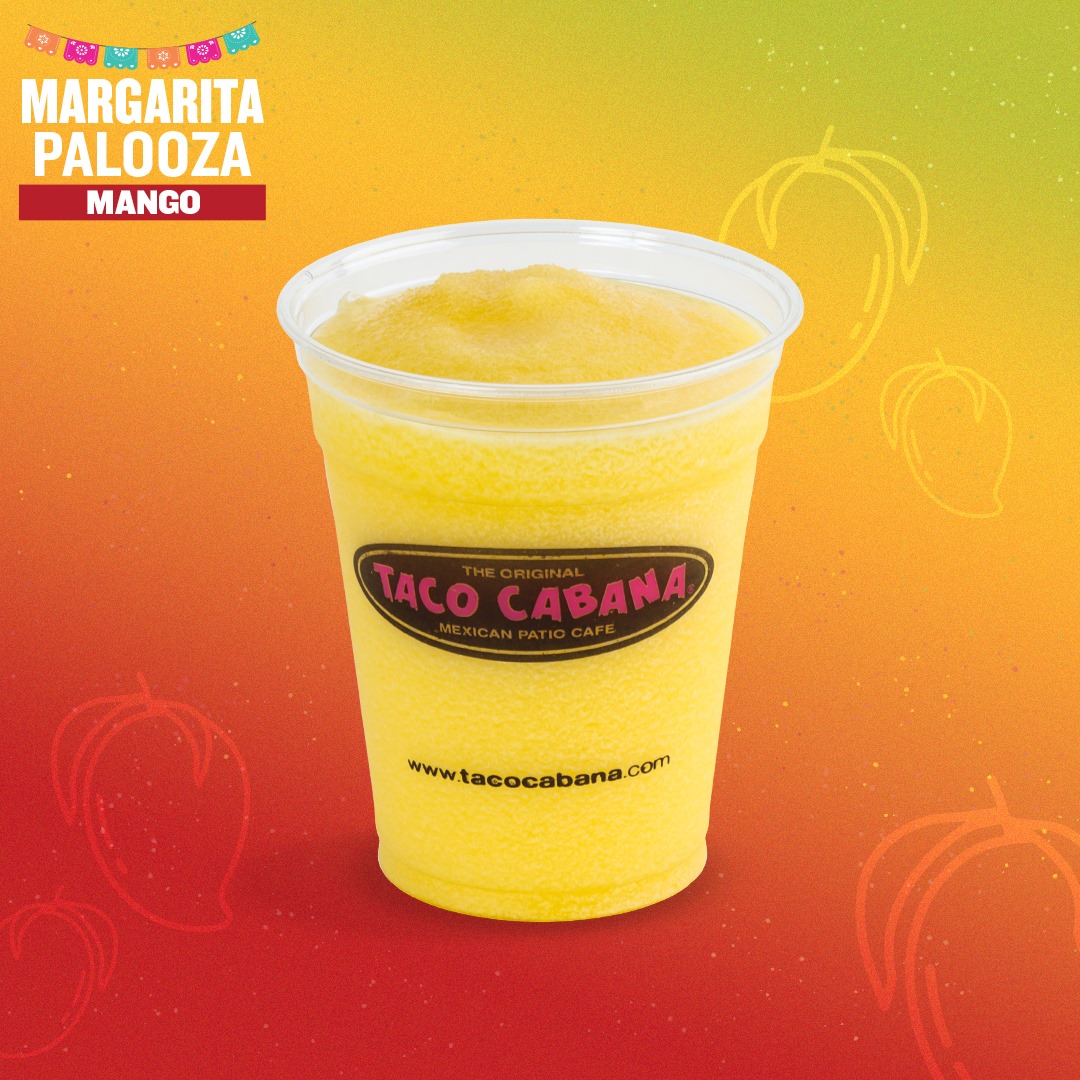 Mango as a fruit is good on its own, and the syrup bases used for mango-flavored margaritas are generally pretty accurate. Taco Cabana’s rendition is saccharine, but not unreasonably so, which is a good thing when you consider that you’re drinking what essentially amounts to an alcoholic snow cone. At the standard one-shot, this mango margarita borders sweet and tolerable, so if you really wanted to power hour the act of doing to-go margaritas with Taco Cabana food by adding two or more shots, this is the one to get. 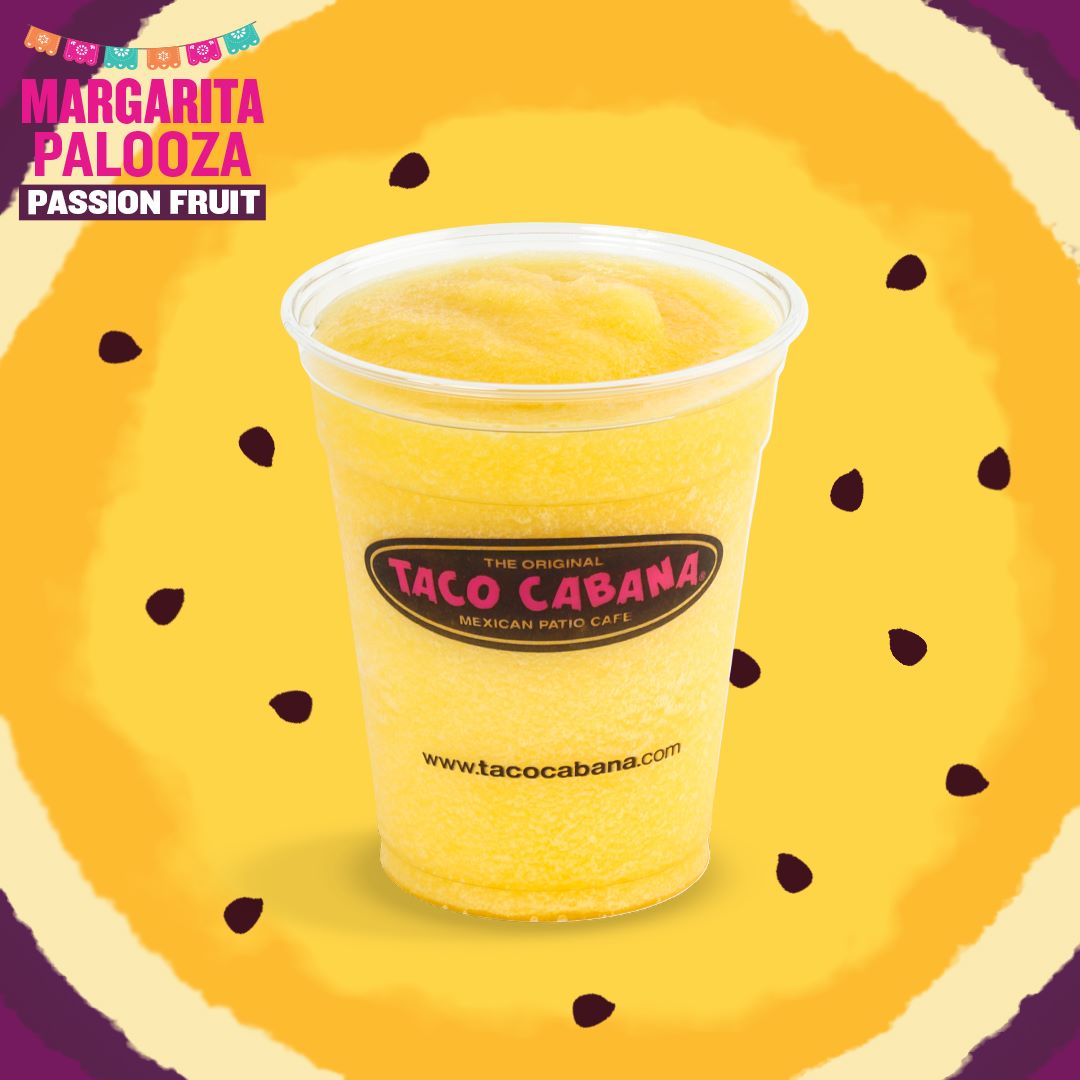 We have never had an actual passion fruit, but if it’s anything like what Taco Cabana is serving up, we’d seriously consider going to a grocery store and picking one up. It’s not bad, definitely very tart and you could drink this all day if you had to. Much like the mango margarita, this one could definitely do with an extra shot and still not lose its profile. This is good stuff. 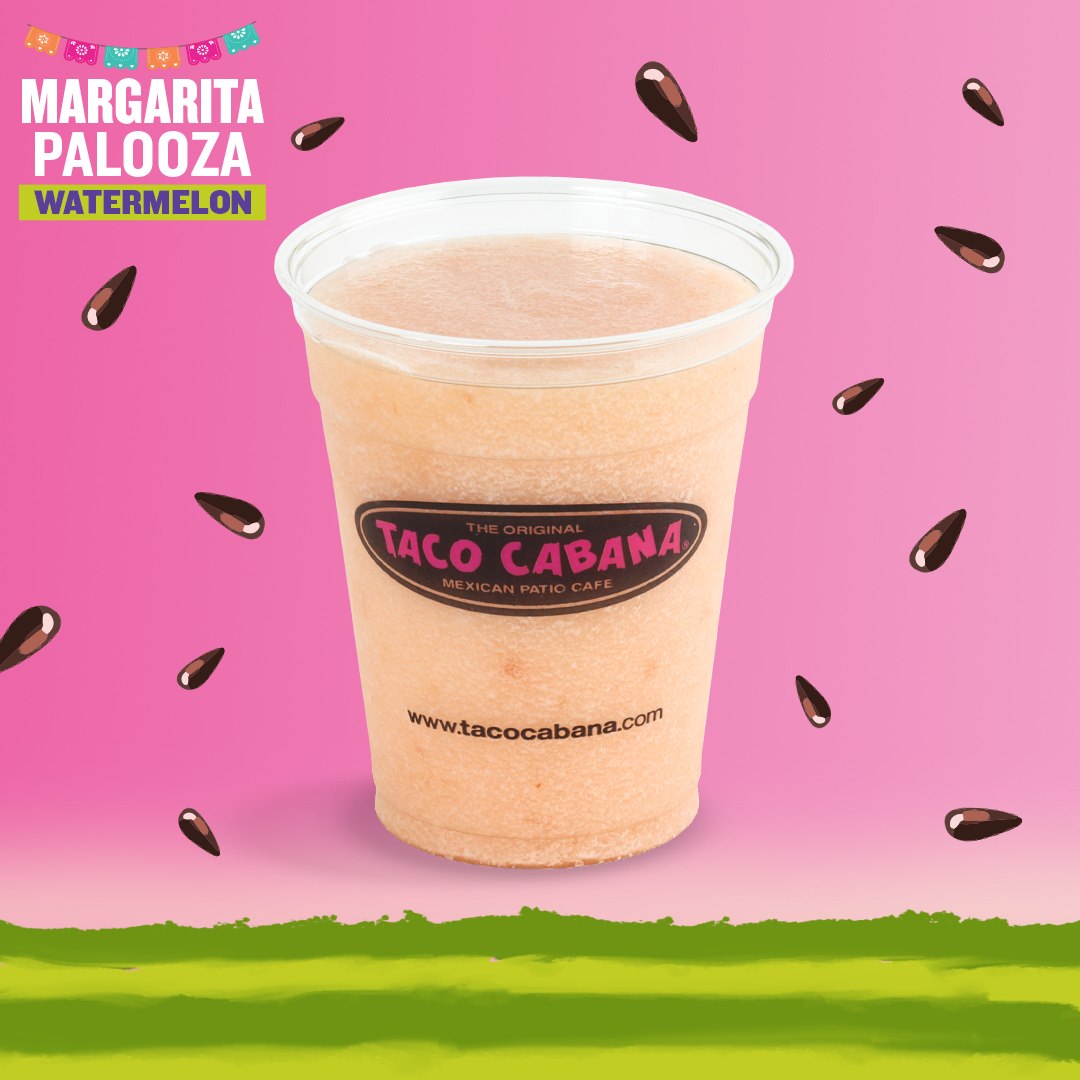 We would give anything to be a fly on the wall at the focus group that the Jolly Rancher corporation held when it decided the little pink mass of sugar before them was what they would ultimately refer as “watermelon.” We don’t understand how anyone could say the two taste alike, but it’s one of those cases where the myth surpassed reality, because upon first sip this is immediately recognizable as watermelon. Personally, it didn’t do anything for us, but as anyone who has walked into the type of establishment where they sell boilermakers ending in the word “bomb” could tell you, Jolly Rancher shots are here to stay. For all of you people who just turned 21: enjoy. 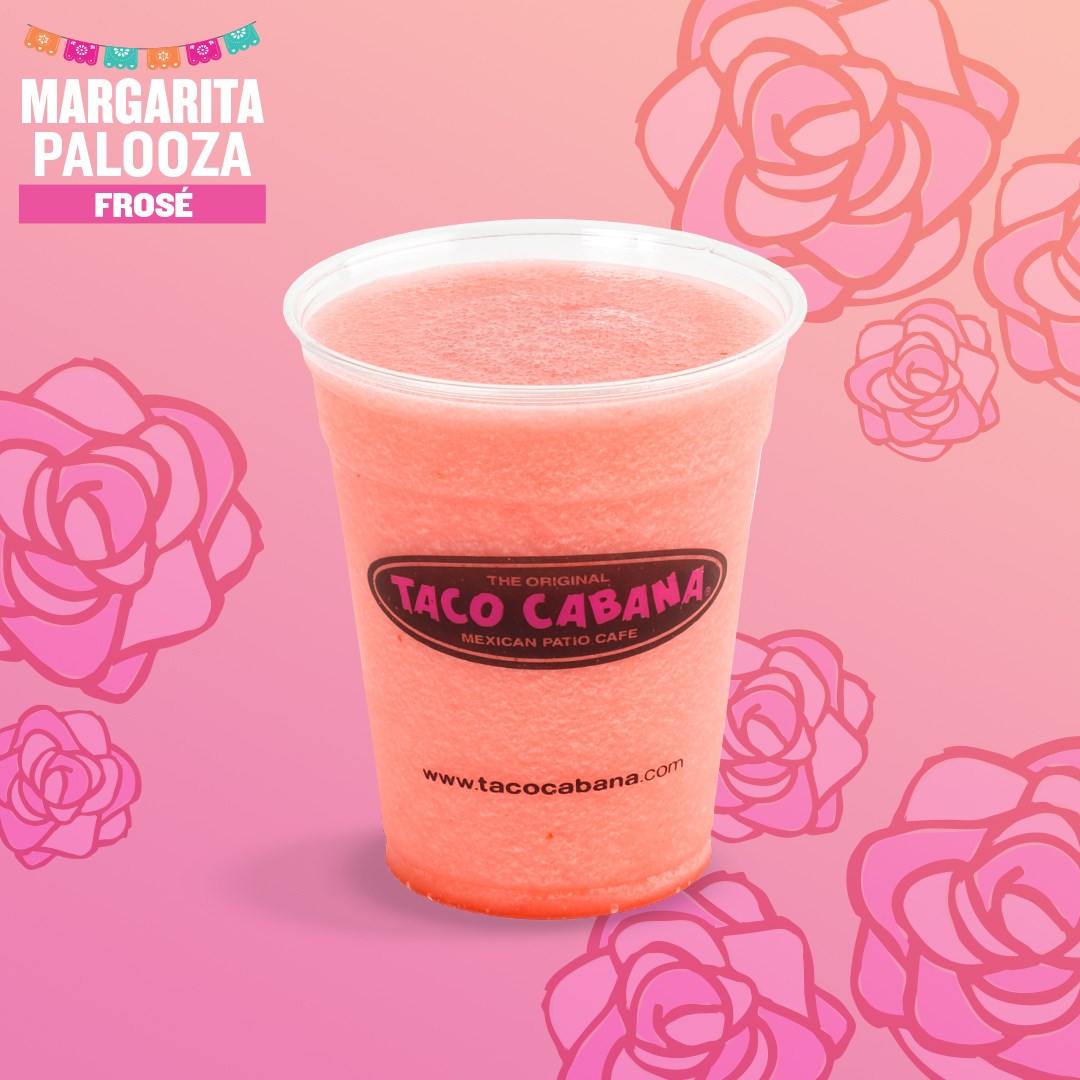 The saying goes that people try to live a champagne lifestyle on a lemonade budget. Taco Cabana’s Frosé Margarita tries to live a rosé lifestyle on a Taco Cabana budget, and it succeeds in doing so. No one who has ever downed a bottle of Instagram’s finest would confuse it for the real thing, but that’s probably something that you’ve negotiated with yourself the minute you took your car through the purple drive-thru window and ordered a cup of the fourth horseman of gentrification. It tastes vaguely rosé-ish, but when compared to some of the more sugar-forward margaritas, it holds its own. We imagine the person at accounting who insisted a frosé option be included feels proud of their efforts. “Taco Cabana has frosé? Must not be all that bad.” Hook, line and sinker. 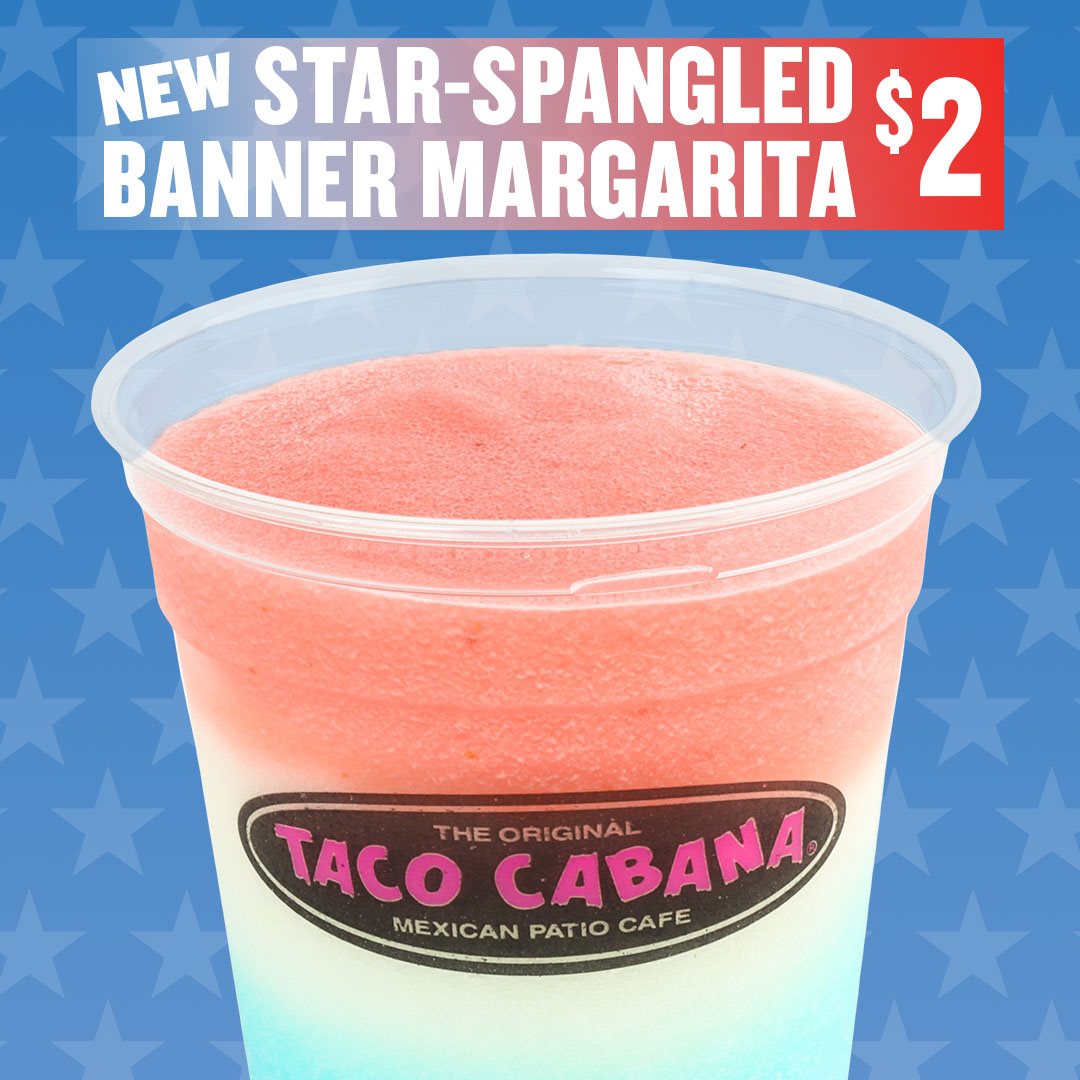 What do you get when you cross Taco Cabana’s strawberry, lime and Blue Curaçao margaritas? A good instagram shot for all of a minute before the ice starts quickly melting and turning into a grey-brown concoction that’s not entirely bad. Much like the mango and passion fruit margaritas, this one could really benefit from adding another shot. It appears it was released to coincide with the Fourth of July celebrations, which makes this a solid choice to help those fireworks we’re still hearing go down easier. But, other than the jingoistic urge to get plastered on a red white and blue drink at a Mexican-inspired fast food establishment, we just don’t see why anyone would get this alcoholic spork over either of its three parent drinks. 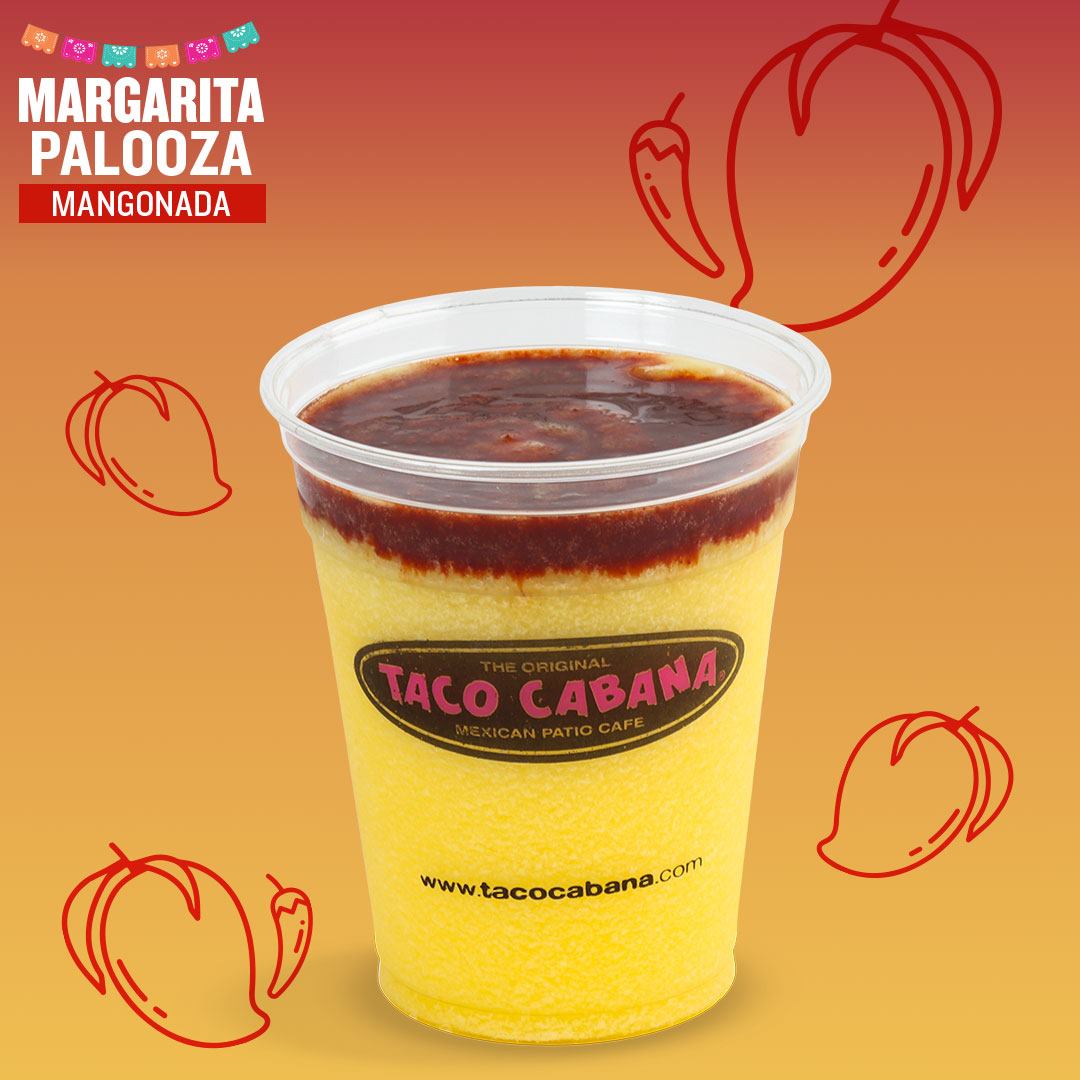 This is honestly the only drink on Taco Cabana’s menu that is true to its name, and a huge part of that is because of added honest to goodness chamoy. (For the uninitiated, chamoy is a sauce made out of pickled dry fruit and peppers that has a very unique savory-sweet profile and is a favorite of Mexican snacks and candy.) This one suffers from the same overwhelming sweetness that most of the other syrup-based margaritas have, but it isn’t as big of an issue if you’re familiar with its namesake, as actual mangonadas from fruit vendors also have a good deal of sweetness. Get one of these, line the rim with tajin, add a tamarind straw and you’re set. 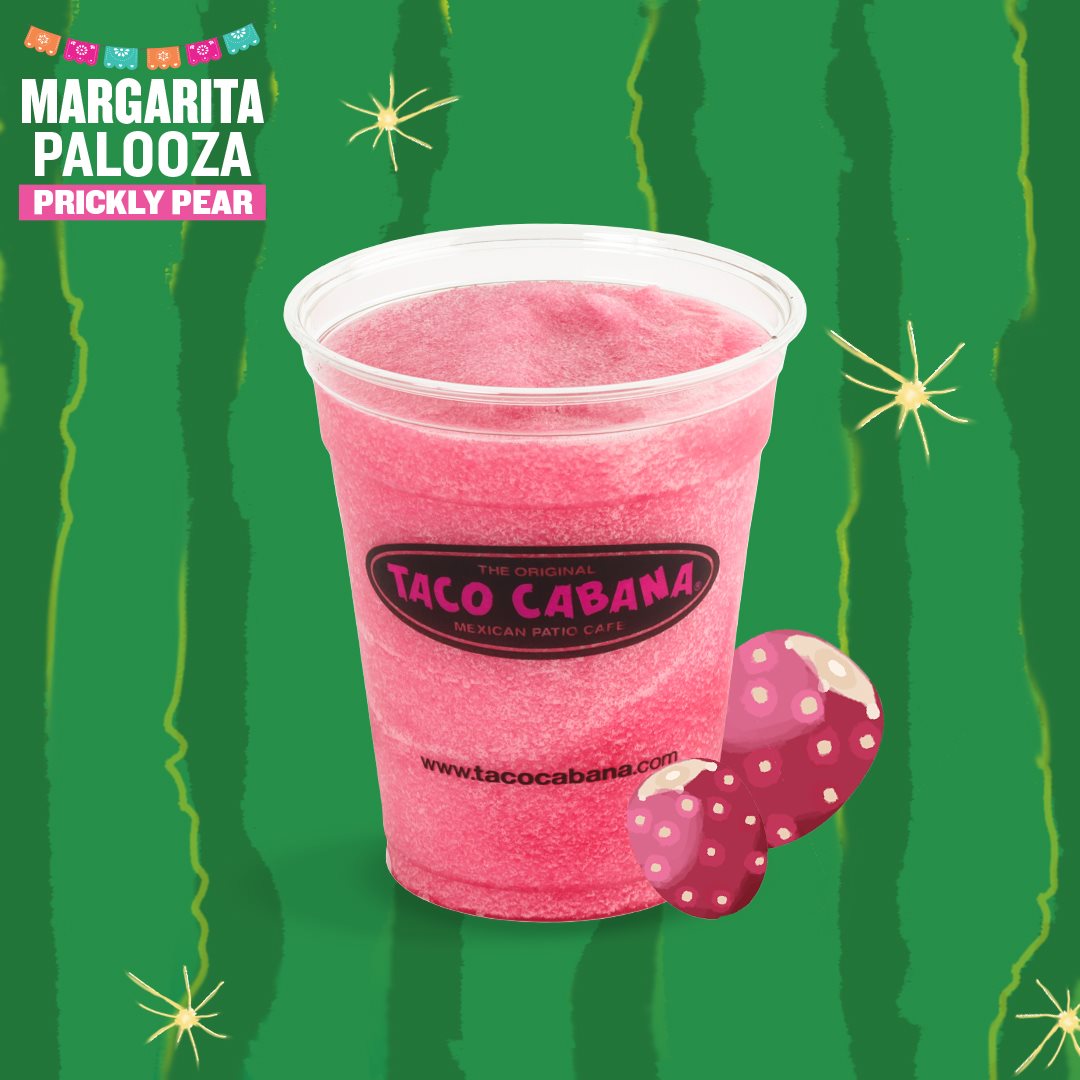 The fruit of the prickly pear has a sweet but mildly tart flavor that’s somewhere between a watermelon and a honeydew, but the Taco Cabana margarita muddles the flavor even more. The result ends up tasting like straight up sugar, and if you wanted to, you could probably convince someone that it’s some sort of bubblegum or cotton candy margarita. It’s possible that this may even be intentional since prickly pear isn’t a super common flavor. Getting away with pulling a fast one in the name of variety? Taco Cabana? Unconscionable! 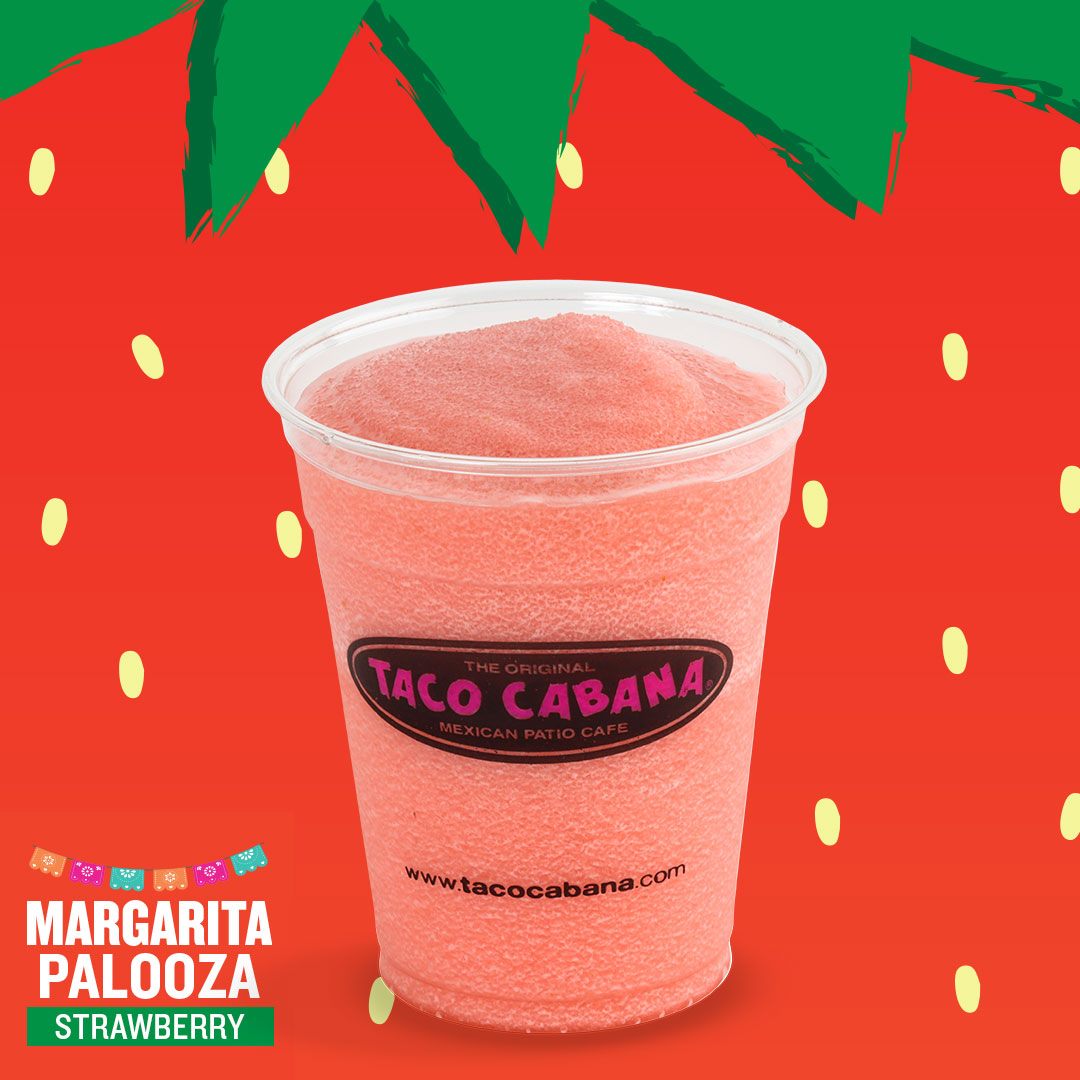 Taco Cabana really came in clutch at the right time with this one. If you’ll recall, we were recently hit with the news that the State Fair of Texas was cancelled this year, and one the things that will probably be missed most is the incredibly overpriced frozen strawberry margaritas sold at the Midway. This offering has real strawberry in it, with seeds and a bit of pulp still visible. Although it clearly has a little sugar added, it’s not overwhelmingly sweet, which makes it easy to have more than one. We found ourselves wishing this was served in one of those scammy-tall frozen margarita glasses you can get at the fair. You start to miss weird stuff when you’re under lockdown, we suppose.